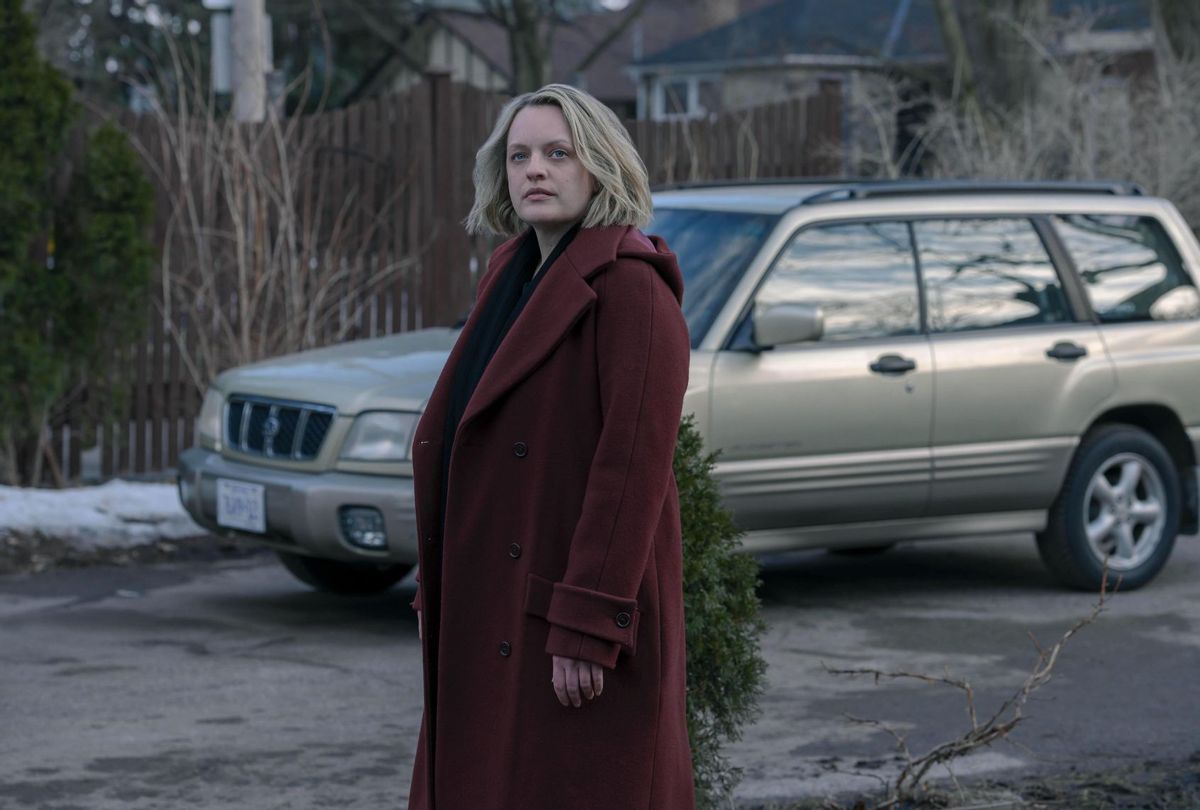 Spoiler alert: This article discusses specific details about the fourth season finale of "The Handmaid's Tale." Stop reading now if you don't want to be spoiled.

In Greek mythology the Furies are deities charged with enacting vengeance upon men. Their origin story varies but since we're talking about "The Handmaid's Tale" fourth season finale, "The Wilderness," let's go with the poet Hesiod's version. It says they sprang from blood spilled upon the Earth as Uranus' son Kronos "hastily mowed off the genitals of his father and threw them backwards to be carried away behind him." I'd say that's on brand.

In high school I frequently conflated the Furies with maenads, female worshippers of Dionysus who whipped themselves into a primal ecstasy before ripping apart a sacrifice, be it a bull or a man. Still, there's a little bit of both in every woman. The many faces June (Elisabeth Moss) shows to former Commander Fred Waterford (Joseph Fiennes) before she metes out her own brand of justice serves as a reminder.

When June learns that despite her public testimony about being imprisoned, beaten and raped by Fred and Serena Waterford (Yvonne Strahovski), that the couple would likely be granted immunity in exchange for sharing vital intelligence about Gilead's government, she grows enraged beyond control. Then something scarier happens – she becomes a vessel of pure calm. A Fury, calculating. She meets with Fred in his prison, has a drink with him, appears moved and tearful by his words of apology which are of course meaningless. Her smile is gentle, but her eyes are dagger sharp.

During this time she uses her power to negotiate a deal with America's exiled government, in which June's erstwhile Commander and still occasional ally Joseph Lawrence (Bradley Whitford) arranges for the release of nearly two dozen women in exchange for Waterford. "The Wilderness" holds this bait-and-switch close to the vest until late in the episode: Fred kisses Serena farewell, believing he's heading to Geneva to confess his crimes and receive absolution, only to be tossed into a van bound for a bridge, and Joseph.

Scenes like this are made to showcase Whitford's ability to balance wry humor and bleak apathy, especially when Lawrence casually shrugs in Fred's face, all but laughing at his powerlessness as June's lover Nick (Max Minghella) takes him into custody. From there Nick drives Fred to a dark forested area of No Man's Land, where June is waiting with a choice: gun, or whistle? Fury, or maenad? Fred, a misogynist to the end, confidently tells June he knows she could never shoot him. A frenzy it shall be.

She blows the whistle, drawing a pack of women with flashlights lining up on the hill behind her. Together they run Fred down in the dark and rip him apart, reserving his finger and wedding band as a special delivery for Serena. June even bites him during the rampage. They hang the rest of his body on a section of concrete, their own version of Gilead's Wall, with the phrase "Nolite te bastardes carborundorum" spray-painted beneath him.

This is June's version of a "particicution," Gilead's version of capital punishment for rapists and others the government deems to have committed heinous crimes, a task allotted to Handmaids. Gilead is a Christofascist state and therefore removes the burden of choice from these women; all must take part so no single person shoulders emotional responsibility for delivering the death blow.

But the mob of women who beat Fred to his bloody end are there by choice, because they are compelled to take part. Because, as series creator Bruce Miller seems to be telling us throughout this season, invoking fury may be the only way the heinously wronged can heal.

Miller wrote "The Wilderness," but Liz Garbus' direction distinguishes it from other episodes. Garbus pairs well with Moss in that she's a filmmaker expertly versed in drawing upon the palette of an actor's expressiveness to color a scene. Moss shifts between June's shuddering rage, disquieting chill, untethered pain and full warmth with the ease of a person peeling off a mask and slipping on another, but instead of pulling our attention to this by relying on close-ups Garbus draws that emotional hue outward.

In one scene, for instance, June leaves the Canadian justice building and stands on the street, hollowed out by the realization that's the very thing, justice, that she won't get if the system has its way. To make us experience that blankness Garbus captures Moss in a long shot, her head and shoulder floating low in a frame gobbled up by a building's gray and dingy exterior.  In the dark forest she pulls in on Moss's snarls as light and fellow hunters bounce behind June.

And Garbus' contribution to the series' signature overhead shots of symmetrical action capture the flashlights laid in a circle as the writhing mob consumes Fred, a pagan ritual through and through.

My distaste for "The Handmaid's Tale" is not a secret at this point. I was well over it at the start of Season 3 when its white feminism and de-centering and disappearance of characters of color reached irritating heights, going as far as to end that arc by painting June as some kind of Harriet Tubman figure.

The monotony of June's repetitive escape and re-capture cycles and torture scenes this season did nothing to win me back. And yet, the last three episodes of this current batch hint at a change in direction that could result in a legitimately provocative shift or be as repetitive as ever, but with the underdogs turned into the wolves.

It all depends on whether the will to forgive is stronger than the forces driving both fury and maenad: feeling and retribution.

"The Handmaid's Tale" is at its best when it meets the culture's debates about reproductive freedom and a woman's agency in politics and society. That's why its best season were its earliest, when the series followed June while managing to depict how Western democracy can slowly slide into a sadistic, totalitarian theocracy.

We see its characters in freer times, figuring out how to cope as their rights erode beneath them before vanishing entirely. One day June is insulted while she's getting a coffee. Not long after that her job in publishing disappears and her bank accounts are frozen.

Emily (Alexis Bledel) sees a fellow gay colleague at the university where she teaches hanged before she's detained. Through all of this the reigning emotion is terror, which is true of any traumatic experience. Once June travels beyond the reach of that oppression, joining her best friend Moira (Samira Wiley) and her husband Luke (O. T. Fagbenle) there's the expectation, voiced by Moira, that refuge and safety are adequate to begin the process of repair.

But this is the part of Season 4 that potentiates fresh possibilities for the series, in that it once again lines up with the partisan impasse imperiling America right now. A pile of problems created this obstacle threatening to crush us, most of them resulting from white conservatives' refusal to acknowledge the truth about slavery and its lasting, ongoing contribution to structure inequality and systemic racism.

"The Handmaid's Tale" doesn't have the guts to go there, of course. But it can and does speak to the hypocrisy of abusers and tormentors demanding forgiveness without earning it or changing the circumstances that created the crimes in the first place. More than this, the story critiques the expectation that the aggrieved be expected to forgive and move forward, that they must instead strive to be something positive – better, joyful, relieved – all of which is unfair and inhumane.

This being TV, the events of the finale's climax probably negates the finer points of what built to Fred's reckoning in those dark woods. The false notion of reconciliation permeates this show; one the first pieces of advice Emily's gives June is not to defend herself to her oppressors. "Just apologize," she says. "They love to be forgiving."

But where does that leave the oppressed, once they're free? Moira's support group sessions with fellow escapees depicts a truer kind of answer when she counsels June and the others that one can't live in an angry place if they want to heal.

"Why not? Why does healing have to be the only goal?" June demands. "Why can't we be as furious as we feel? Don't we have that right?" Then June tests that thesis when a former Aunt who caused Emily's lover to be executed comes to their group and says, point blank, she wants Emily to forgive her, because "I haven't had a moment's peace."

Emily refuses. Later, she drives out to meet the woman only to find she's hanged herself. At the next support group the other survivors once again fall into the mode of supposing how Emily must feel – guilty? Distraught, as if it's her fault. June finally silences the others and asks Emily to speak for herself.

This admission leads to a cascade of confessions about real, dark revenge impulses. Moira is horrified. (And please add writing Wiley's character as so wise and painfully forbearing as another example of Black women tropes this show peddles.) June realizes she's on to something.

From that moment on the small friendly efforts to police women's feelings in this supposedly liberated society become more noticeable. Multiple characters insist that June try to be happy for having attained her freedom, that she count her blessings, that she try to move on once the government has decided what Fred is giving them is more valuable than what he did to scar her.

But June's rage makes other plans that ensure Fred gets what he deserves.

Now what? For June the future is murky. She returns home bloody-faced, and Luke can only guess at what she's done. She takes her baby in her arms and says she only wants to hold her for a few moments before she goes.

Recalling that the first season ends with June declaring, "They should have never given us uniforms if they didn't want us to be an army," Miller seems to be hinting at a coming retaliation arc, which could either provide the catharsis this narrative achingly requires, or could become as redundant as recent seasons have felt. Much of it depends on what the show chooses to do with its heroine's deserved fury and what the writers choose to sacrifice to it, for better or worse.

All episodes of "The Handmaid's Tale" are streaming on Hulu.