In a finale written by King himself, the author hauls out old tropes, wasting a chance to evolve his story for 2021 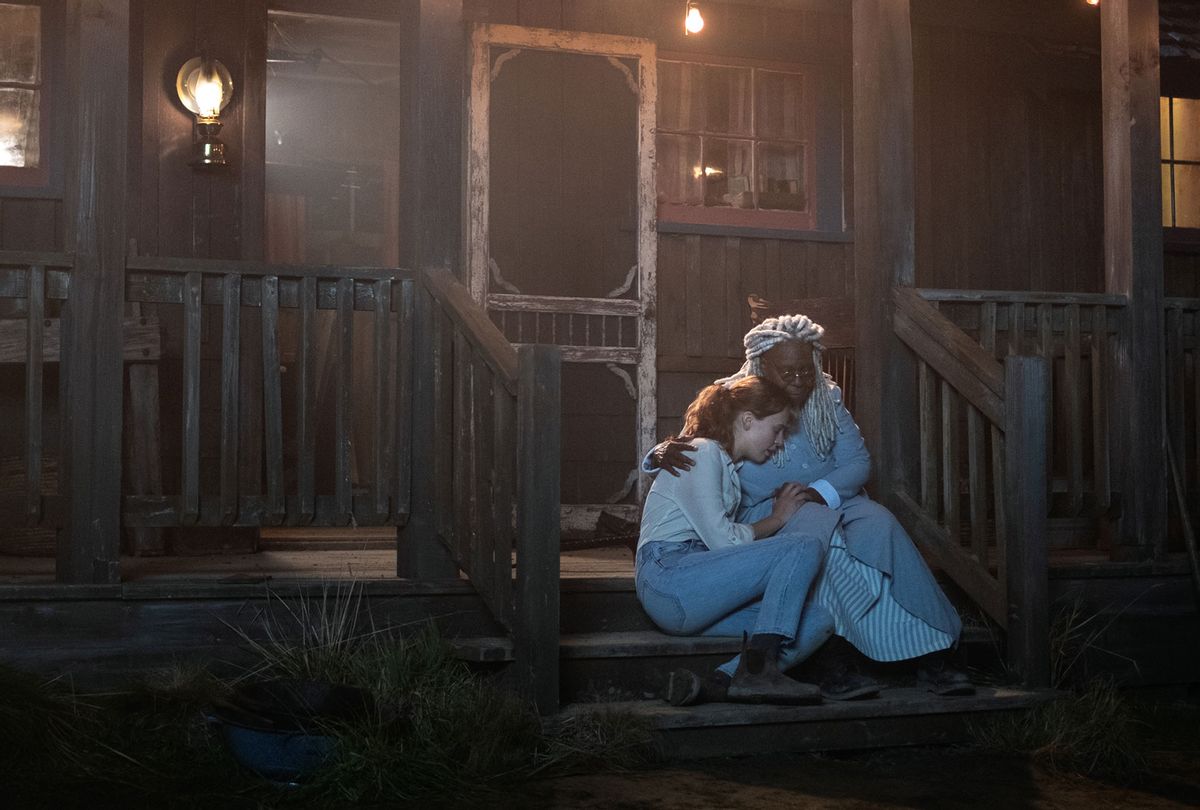 The following contains spoilers from the Season 1 of "The Stand," including its finale.

If you watched all nine episodes of the CBS All Access remake of "The Stand" . . . why? Why did you do that to yourself?

This is not a facetious query, I swear. I'm asking because I want to understand why you willingly subjected yourself to nine hours of a series that established its predictability and mediocrity by the third episode. You experienced the stupidity of this version's Trashcan Man as interpreted by an actor who really should know better, Ezra Miller. Miller took one of the better-known characters from Stephen King's ginormous novel and transformed him into a slavering, blithering idiot, adding one more thing to despise atop a mountain of mediocrity.

There are many better shows – past and present – that you could be watching right now. So why did you devote your precious waking energy to this one? I have a firm guess about the answer, because it's the reason I returned to watch the conclusion – I was lured by the promise of seeing completely new and original ending penned by none other than King himself.

It's an intriguing sell even for someone who was done with "The Stand" before much of the world had seen its first episode, especially when you look at the novel's history. "The Stand" first published in 1978, but King re-released his expanded "Complete and Uncut" edition of the story in 1990, adding hundreds of pages left out of the original release as well as updating the setting from the 1980s to the 1990s.

The precedent proves that King isn't precious about tweaking certain plot details in a way that speaks to America in 2020 and 2021 and even more to the point, speaks to who he is in this moment. Recall that in recent years King has styled himself as an anti-Trump agitator, famously taking on Ted Cruz at several turns.

He also stepped in it a little over a year ago when the Oscars nominated only one person of color, Cynthia Erivo, across four of its major acting categories. "For me, the diversity issue – as it applies to individual actors and directors, anyway – did not come up," King tweeted in response to the resulting furor. "That said I would never consider diversity in matters of art. Only quality. It seems to me that to do otherwise would be wrong."

If you're wondering what this has to do with the ninth and final episode of "The Stand" then you haven't been keeping up with the numerous critiques of King's representations of Black or non-white people in his work, and this one in particular.

His habit of leaning hard on the Magical Negro trope has fueled a number of thoughtful and widely circulated critiques, one of the best having been authored by Africanfuturist writer Nnedi Okorafor in 2004. After she lists what she calls the Five Points of the Magical Negro she breaks it down further.

This pretty much describes Mother Abigail. Well, also Dick Hallorann in "The Shining" and John Coffey in "The Green Mile," but we're writing about "The Stand" so let's stick with Whoopi Goldberg's character.

By the time this finale rolls around Mother Abigail has expired, as have three of the characters she sent to Las Vegas on a suicide mission to confront The Dark Man, Randall Flagg (Alexander Skarsgård) and die for the sins of others.

This happens in the eighth episode, where the hand of God reaches down with a ball of energy and smites Flagg and his faithful with lightning before setting off Trashcan Man's nuke.

Evil is vanquished, and the surviving good guy and primary antagonist Stu Redman (James Marsden) is shivering with a broken leg in the desert until he is saved by the sweet and determined Tom Cullen (Brad William Henke). This penultimate episode ends with Redman's love Frannie (Odessa Young) going into labor. Honestly, the show could have ended there or perhaps tacked on a brief epilogue.

Oh, but this would have denied us the chance to take in King's new finale which, as it turns out, more or less adapts the ending he wrote in his uncut edition. Frannie's child is born healthy at first, then comes down with Captain Trips but miraculously recovers. Stu and Frannie are reunited. All is well in Boulder, Colorado . . . which of course means the pair, along with Glen's dog Kojak, decide to move to – where else? – Maine. All roads in King's universe lead to and through Maine.

Along the way they drive through Nebraska, Mother Abigail's home state, and decide to stop over at a very nice, empty farmhouse to rest for a day or two. What they don't realize is that in a nearby cornfield, camped out under a dirty sheet is . . . a little Black girl.

A very wise and supernaturally attuned Black child who, despite appearing to be connected to the secrets of the universe and God, decides to live outside instead of inside the perfectly solid farmhouse sitting just a hop, skip and a jump from the cornstalks.

Why is she there? I mean, other than to prove No. 5 on Okorafor's list, which is: "He or she is wise, patient, and spiritually in touch. Closer to the earth, one might say. He or she often literally has magical powers."

Well, because while Stu is out on a supply run and gets delayed by a flat tire, Fran tumbles down a well shattering her hip, puncturing a lung and breaking her leg in several places. While she's unconscious Flagg appears and tempts Fran and she rebukes him.

While this is happening Stu returns and sees Fran has pulled a Baby Jessica. Assisted by Magical Black Girl Whose Name He Doesn't Know, Stu retrieves her from underground. Stu lays Fran's broken body supine and Supernatural Black Girl – who, by the way, is dressed in a shabby sheath straight out of the Depression Era – faith heals all her breaks and fractures. After this, while Stu and Fran are embracing with relief the girl vanishes, leaving behind her doll for Fran's baby.

Speaking of Flagg, the miniseries ends with the same problematic scene as the re-issued version of "The Stand" with The Dark Man emerging stark naked from a pool of water in the middle of some unspecified jungle. There he's confronted by a tribe of bare-chested indigenous folks.  After he makes one of their warrior's head explode, they all drop to their knees and worship him, leading him to announce himself as Russell Faraday.

Again, if I'm recalling correctly this scene is pretty much straight out of the 1990 edition of "The Stand," and that means the ending isn't exactly new. Neither are the stereotypes that birthed it.

Okorafor credits genre writer Steve Barnes for introducing her to the term Magical Negro in 2001, a full 20 years ago. Within that time King must have encountered a least a few critiques of his addiction to this specific cliché.

It doesn't take much of a deep dive; type Stephen King Black people into Google's search engine and the first entry that comes up is "Stephen King Needs More Black Friends." The second is . . . the Wikipedia entry for Magical Negro.

Like Okorafor, I still appreciate King's work. I also agree with her opinion that he's not racist.

What he consistently proves himself to be is a 73-year-old rich man who lives in one of the whitest states in the nation and probably doesn't encounter many people of color who aren't Academy Award nominees like Erivo, who plays his character Holly Gibney in HBO's adaptation of "The Outsider" (a character that also is neuroatypical and supremely gifted). Or, for that matter Sexiest Man Alive winners like Idris Elba, who plays the hero in the unfortunate 2017 film adaptation of "The Dark Tower."

One crucial way that King is like anyone else is he's capable of the sort of thoughtful evolution we never see in this version of "The Stand" – not from the start and at no point in an ending that isn't merely unoriginal, it's uninspired.

I can only guess that King viewed Mysterious Black Healer Child as an improvement over past renditions of mystical Black people in his books. Maybe in his mind she represents his nod to Black Girl Magic.

Obviously she's the reincarnation of Mother Abigail, placed on Earth to combat Flagg's return and establishing that the war between good and evil continues. But Mother Abigail got housing. He didn't even give this child a roof to sleep under or a name. And I am not an Indigenous person but if I were I'd still be re-attaching my jawbone to my face.

King isn't obligated to take on more Black friends, but maybe before he or someone else decides to reprise non-white characters the author made famous for the wrong reasons they might consult a wiser person who can point out these bad choices and ask, "To what end?" Because for so many reasons this one isn't worth the extra attention.

We regret to remind you that all episodes of "The Stand" are currently airing on CBS All Access.