In the heavy-handed "Stillwater," Matt Damon is an Oklahoman in France trying to free his daughter 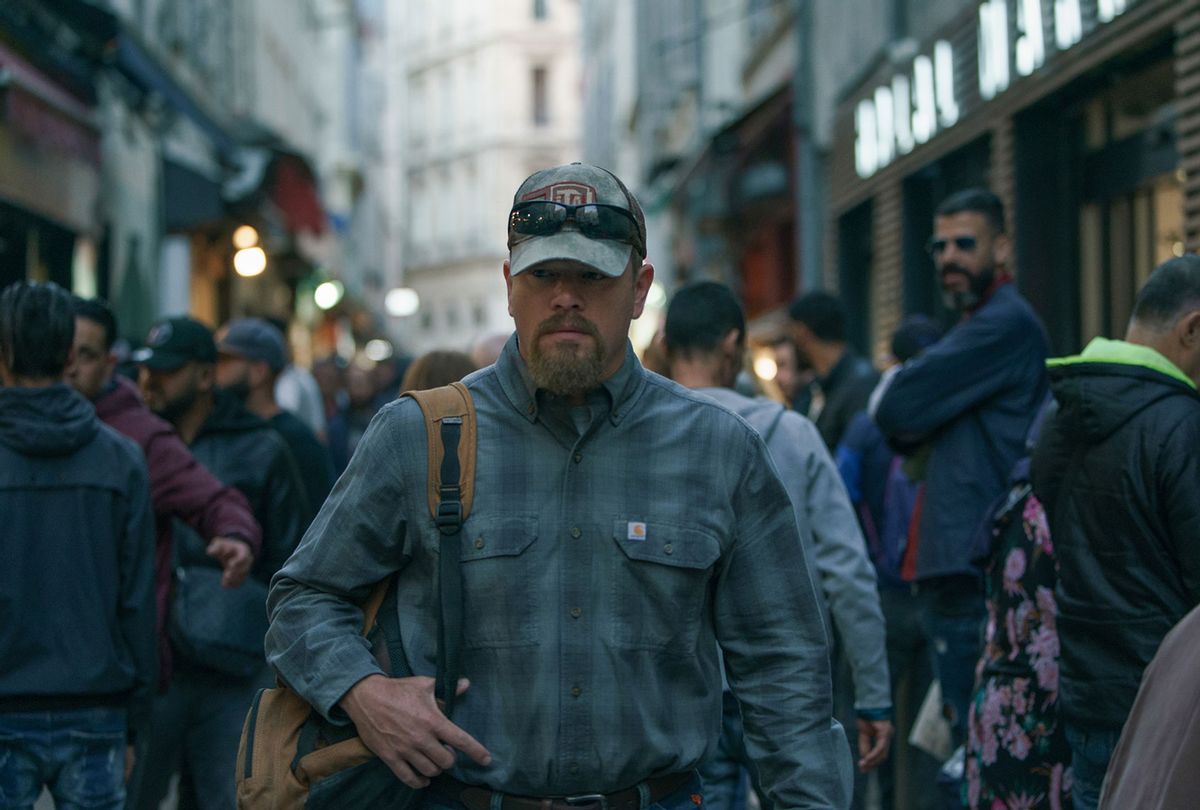 "Stillwater" opens in the titular Oklahoma town where Bill Baker (Matt Damon) works a temporary construction job, because he is between gigs on oil rigs. He does cleanup and rebuilds. It is a heavy-handed metaphor — the first of many in the film — for the cleanup and rebuilding to come.

A few scenes later, Bill is off to Marseille to visit his daughter, Allison (Abigail Breslin), who is in prison for murdering her lover and roommate, Lina. (Cue Amanda Knox reference). Allison claims she is innocent, and on this particular visit, she asks her father to deliver a note to her lawyer Leparq (Anne Le Ny). It suggests a young man, Akim (Idir Azougli), is responsible for the crime, and it asks Leparq to improbably reopen the case. The lawyer denies the request, leaving the blue-collar American to adopt his brand of American hegemony and take matters into his own hands.

Bill lies to his daughter about Leparq's response, which, of course, means she will eventually find out the truth. Allison doesn't trust Bill anyway (her letter indicated this), but the strained family tensions feel muted here. They should add depth and shading to a fraught situation — and they do in an early moment, when Bill has a one-sided conversation with Allison about Oklahoma football during a prison visit— but mostly the father/daughter relationship feels underdeveloped. How, Bill, a man of faith who prays before he eats, feels about his daughter being a lesbian is never expressed. (It may not need to be discussed, but given that Bill's character is such a faithful, dyed-in-the-wool Good Old Boy, surely, he has an opinion about homosexuality).

Sluggishly directed and cowritten by Tom McCarthy ("Spotlight"), "Stillwater" starts out like a detective story with Bill finding his way to Akim with the assistance of the English-speaking Virginie (Camille Cottin), whom he meets cute when she is temporarily housed in Marseille's Best Western. Virginie is a theater actress with an adorable 9-year-old daughter, Maya (Lilou Siauvaud, an irresistible scene-stealer). Virginie helps Bill translate at meetings with folks who may know Akim. She even drives him to the dangerous neighborhood where Akim is reported to live. Bill is so hellbent on getting his daughter out of jail he is willing to risk danger to find this possible suspect, despite Virginie telling him that is "not how it's done here."

McCarthy's film is not uninteresting when it addresses the cultural divide, and yet there are clumsy scenes of Virginie and one of her friends asking Bill if he voted for Trump, and if he owns a gun, which stereotypes Americans to the same extent that the incurious Bill simplifies the French when he buys Maya chocolate croissants. Moreover, at one interview on Bill's behalf, Virginie gets frustrated with an anti-Arab Frenchman, and walks away. Virginie's refusal to communicate with a racist illustrates the film's situational ethics. This teachable moment only means that her righteousness and Bill's indifference will come into play again later as "Stillwater" lumbers to its conclusion.

At 140vminutes, this overlong and underwhelming story drags in part because it spends considerable time depicting the easy domesticity that Bill and Virginie create when Bill moves into her apartment after failing to catch Akim. He becomes a surrogate father for Maya — an obvious redemption for not being there for Allison, who was raised by her grandmother, Sharon (Deanna Dunagan). The scenes between Bill and Maya are cute, and he cooks her hamburgers and tells her to do her homework. But this extended section of the film is really just a long pause until the detective story picks up again. At least the drama is punctuated by some picture-postcard shots of Marseilles.

It is also during this portion of "Stillwater" that Allison gets a day's release from prison. She spends it with her father, visiting Lina's grave, observing that "Life is brutal," and giving a speech about her love for Lina. Then she goes swimming in the big blue Mediterranean Sea, experiencing a brief sense of freedom before meeting Virginie and Maya at dinner. If nothing else, this episode gives Breslin a chance to flesh out her thin character. Perceptive viewers will read her comments — she warns Virginie that Bill will disappoint her — and actions clearly.

However, after Allison's visit, there is scene in a hospital (with Bill praying) that feels cheap. Something dramatic happens quickly — and is resolved almost as fast — but it is never really discussed. This indicates that "Stillwater" glosses over some of its big moments as well as its tinier details. McCarthy trades in "big ideas," but he gives them very little significance. Allison is a symbol for American guiltlessness. When she tells her father that she is learning Maghrib ideas about acceptance in prison it seems disingenuous. The entire film does, too.

In fact, nothing in "Stillwater" feels real except the beefy Damon and his Oklahoma accent. Bill's character is a gun owner and recovering alcoholic whose wife died by suicide. But that is all he is and represents; his character is too facile. When he and Virginie start to couple up, it feels more a romance of convenience. Surely, Virginie sees him as a fling — the very word she used to describe her relationship with Maya's father. Had there been a more palpable love and desire between this odd couple, the film could have created some emotional impact. (This is not Camille Cottin's fault; she is warm and inviting, both sensitive and sensible). Instead, "Stillwater" plays up the fact that Bill has never been to the theater, and McCarthy needlessly shows Bill watching Virginie rehearse some experimental play and then features a useless scene of him fumbling for a way to describe his thoughts. It is meant to be amusing but it is just dull.

When the film finally circles back to the detective narrative, it does so in a contrived and groan-inducing way that is simply unforgivable. Suffice it to say "Stillwater" dives off the cliff with narrative leaps that involve secrets and lies, DNA samples and the police, and revelations that are meant to be shocking or surprising but are, in fact, neither.

McCarthy wants all this drama to raise questions about shame, guilt and acceptance, as well as the importance of about finding peace, not justice. But "Stillwater" is so manipulative in its coincidence and so lazy in its character development that it becomes difficult to care if Allison is innocent or guilty, or what lengths Bill — a self-described "f**kup" — will go to free his daughter. Damon's earnest performance alienates viewers as Bill makes a series of increasingly bad decisions that strain credibility. Watching him struggle and suffer is unsatisfying. And McCarthy fails to create suspense or jerk tears as Bill faces critical decision points. The music builds telling audiences what to feel, but it is all remarkably unmoving.

"Stillwater" should be a deep investigation into a moral quandary, but it just ends up being shallow and irresponsible.

"Stillwater" is in theaters July 30.