The medical-industrial complex: When patient-doctor interactions are tainted by the profit motive

US medical institutions are tainted by capitalism. Social pressure sometimes makes it hard for patients to say no 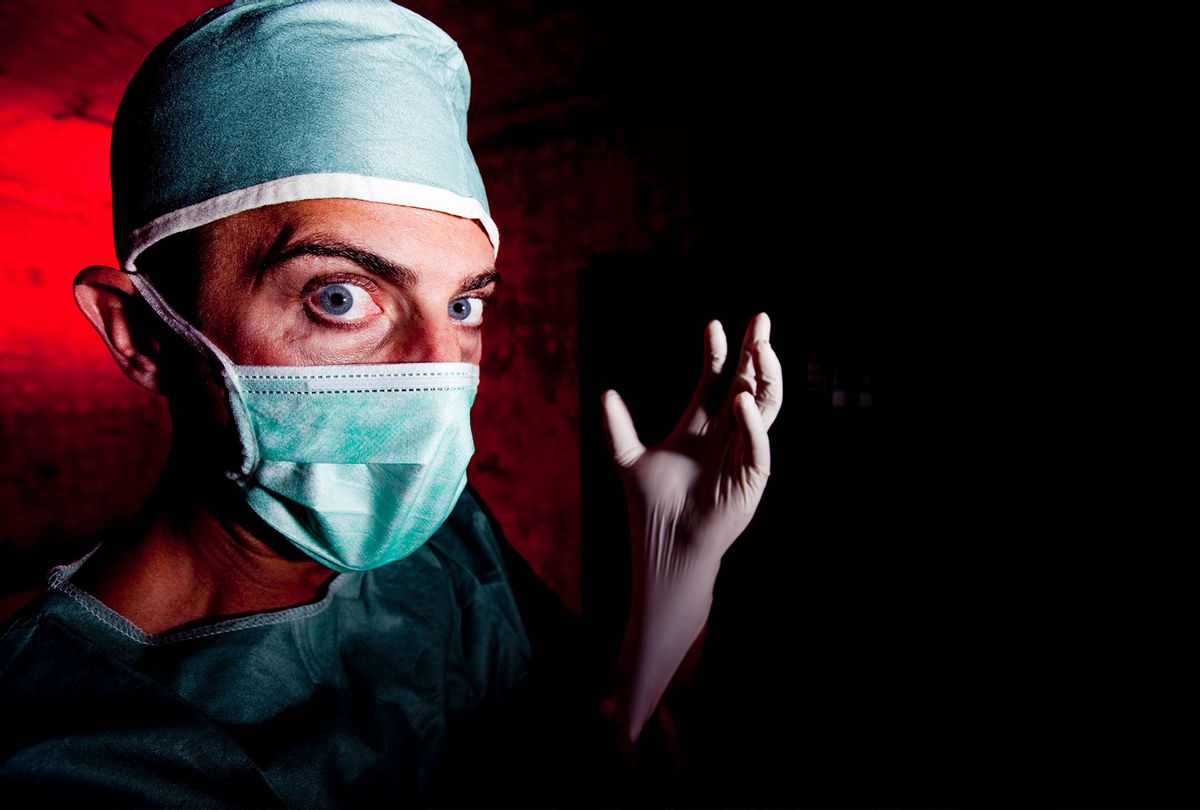 Though Richard Wolff is professor emeritus of economics at the University of Massachusetts–Amherst and a highly regarded public intellectual, he is not immune to the frustrations that beset many of those who seek medical care. Back in the 1970s, he had one particularly aggravating stay at the Yale New Haven Hospital. His wife had given birth to their daughter and the happy couple was ready to leave. But an administrator told them that they were not allowed to go.

"I looked at her and said, 'Excuse me?'" Wolff recalled. And she repeats, 'You can't leave. You have to stay here a couple of days when you have a baby.' I said, 'What are you talking about? She said, 'Well, that's the policy of this hospital.' And for the next two or three minutes, we go around and around, repeating ourselves to one another, and then I say, 'I'm leaving.' I look at her because by now I'm angry. I said, 'If you want you please call the police and we will have a scene right here, and let me remind you' — cause I could see where this was going 'that I've lived in this town a long time. I'm a professor over at Yale. You might want to think about this.'"

That, apparently, cleared everything up. "She said, 'You can go.'"

Wolff's story echoes that of countless ordinary Americans who seek medical treatment and find themselves pressured into treatments, visits, or stays at the hospital that, generally, make the medical-industrial complex more money. This can happen even when the patients believe that the medical institution's recommendation is not in their own best interest.

It is important to emphasize that the problem is not with either doctors (generally speaking, at least) or the validity of the scientific conclusions reached by the American medical establishment. As the COVID-19 pandemic has brought junk science to the political mainstream, one must parse the difference between being skeptical of the business side of American medicine and being skeptical of the scientific side. When it comes to their overall medical knowledge or their handling of specific issues (public health guidelines about the coronavirus pandemic, advocacy of vaccines, etc.), American medical professionals are among the best in the world. When it comes to offering humane health care, however, the United States is marred by the character of its partially for-profit system.

The United States is not the only system in the developed world in which insurance companies and others can turn a profit off of medicine. It is true that countries like Canada, the United Kingdom, Norway and Sweden have single payer health care systems (in which governments are the main subsidizers of health care), but even developed nations which cover people through private insurers are usually more progressive than the United States. The Netherlands, for instance, requires companies to accept and renew anyone who applies as well as provide all customers with a minimum number of services. Insurers in Switzerland must use the profits they earn on basic services to reduce premiums for the people.

The problems inherent in American health care have prompted long overdue conversations about the need for Medicare for All or other single payer health plans. Yet the struggles with American health care are not always confined to questions of inequities and premium rates. Sometimes they affect ostensibly mundane medical interactions, forcing patients to endure inappropriate pressure or emotional abuse in ways that don't always inspire news items or think pieces.

While doctors generally have a patient's best interest at heart, hospitals — many of which are for-profit — are also bound to turn a profit. That creates an odd gray area, where it can be hard to tell whether a doctor or administrator's advice is coming from a place of caution or concern or a desire to milk a patient's healthcare plan for more money. Indeed, as defying a doctor's advice or orders are frowned upon, many hospitals benefit from these subtle feelings of coercion that make patients (or their health insurance) pay for supplementary visits or even procedures.

This is what happened to Dan Morris, who works in online marketing, when he saw a gastroenterologist roughly three years ago. He has Crohn's disease and was taking Azathioprine, an immune system suppressant medication which he was concerned might impact his fertility. This may not be the consensus view of the medical establishment, but another doctor had already told them that Azathioprine was a bad idea if they wanted to conceive. Morris and his wife wanted to see if medications existed which could help his condition and be better suited for his future plans.

"The gastro doc literally became enraged at my wife and me in his office, telling us that if I 'wanted to get holes in my gut then go ahead,'" Morris told Salon by email. "The IBD nurse who was there at the time was mortified by the situation and apologized profusely afterward. This doctor simply wanted things to be done his way and didn't like being questioned."

Fortunately for Morris, he found another doctor who prescribed a drug called Mercaptopurine, which alleviated his concerns. Morris now has two healthy children, but still remembers that it was "difficult to know what to do or say when the specialist doctor was yelling at us telling us we were wrong. In his defense, we later found out that he had done an in-depth study into this drug and its relationship with male fertility, so he was an expert."

Even so, Morris knows that other doctors feel differently, and insists that his tone was inappropriate.

As Wolff opined, the US has what might be called a "medical-industrial complex." Wolff was playing on a famous term coined by President Dwight D. Eisenhower, who denounced the "military-industrial complex" in his 1961 Farewell Address.

"He warned us against being entrapped by the cozy relationship between the government, a military who buys and the ability of companies who sell all the equipment," Wolff explained. "We have what I have called a medical-industrial complex. It's a collection of entities — basically five of them, four of them private and one of them public. The public is the federal government: Medicare, Medicaid, and all of that. And the four private are hospitals, number one; doctors, number two; drug and device makers, number three; and medical insurance companies, number four."

The end result of this monopoly is a system in which individual companies may fiercely compete with each other, but they align when it comes to their mutual economic self-interest. That, in turn, means that they will often make decisions about patients based on business rather than humane considerations... and the system is so opaque that the patients themselves may not ever know why.

"This has nothing remotely to do with the quality of the care or the quantity of the care," Wolff told Salon. Even the government has become beholden to the medical-industrial complex, so that it now often works for big business instead of patients.

"They have their regulators who don't interfere in the monopoly," Wolff explained.

Gail Trauco, R.N., a Patient Advocate and healthcare professional, said that there is another factor which contributes to this problem: ego.

"Ego does enter clinical medicine and occasionally one encounters an ego-driven physician," Trauco wrote to Salon. "From my experience most of these physicians are in private practices which are not managed or governed by any major medical institution."

That seems to have been the case with Jenny Pritchett, better known as Jenny True, the pregnancy and parenting columnist for Romper who wrote the book, "You Look Tired: An Excruciatingly Honest Guide to New Parenthood." She told about a time when she took her young son to a doctor because he had a blocked tear duct. While it wasn't life threatening, her child was in pain, and Pritchett wanted him to feel better.

At the hospital, Pritchett "saw a random pediatrician (ours wasn't available), and he immediately suggested antibiotics." Pritchett says she was "stunned, as I thought the research was out there about how too many antibiotics, especially for non-emergency situations, can lead to suppressed immunity over time."

While the situation was not life-threatening, Pritchett was still surprised at the advice and respectfully asked if he had other suggestions. The doctor leaned back in his chair and became condescending, insisting that if the problem was serious enough for Pritchett to go to the hospital, it required antibiotics.

"There was no room for me to ask questions, and I got that feeling of anger, defensiveness, and embarrassment that makes it hard to ask questions," Pritchett told Salon. "I felt incredible pressure to assure him (a white male, if that makes any difference, which our original pediatrician was not) that I appreciated his suggestion, and said thank you for the prescription, and I just didn't pick it up."

Pritchett later found a remedy that worked for her child, but the memory of the uncomfortable encounter still lingers. The key is that she understood, and unequivocally advocated for, both her rights as a patient and those of her child.

That, as Wolff explains, is the key thing that patients must understand: You do not lose your basic rights just because you put yourself in a doctor's care.

"The fact that I'm in a hospital and my wife had a baby does not relieve me of my freedom to leave a building," Wolff told Salon. He wonders how many people make bad medical choices because they simply don't realize that they have the right to say no.

"My guess is that a lot of these circumstances are like that, because all of this is a kind of monopolistic situation," Wolff said. "The real story is, 'Do people accept it or do they tend to intimidate people enough so that they simply shake their heads?' They kind of know something is going on here that isn't appropriate, or isn't good for them, but they don't believe there's anything they can do. And so they go along, even though there is plenty that they can do."