Meghan McCain attacks Kathy Griffin after lung cancer announcement: "I don't like her"

With Mary Trump also taking a shot at McCain, the co-host's final week on "The View" is as controversial as ever 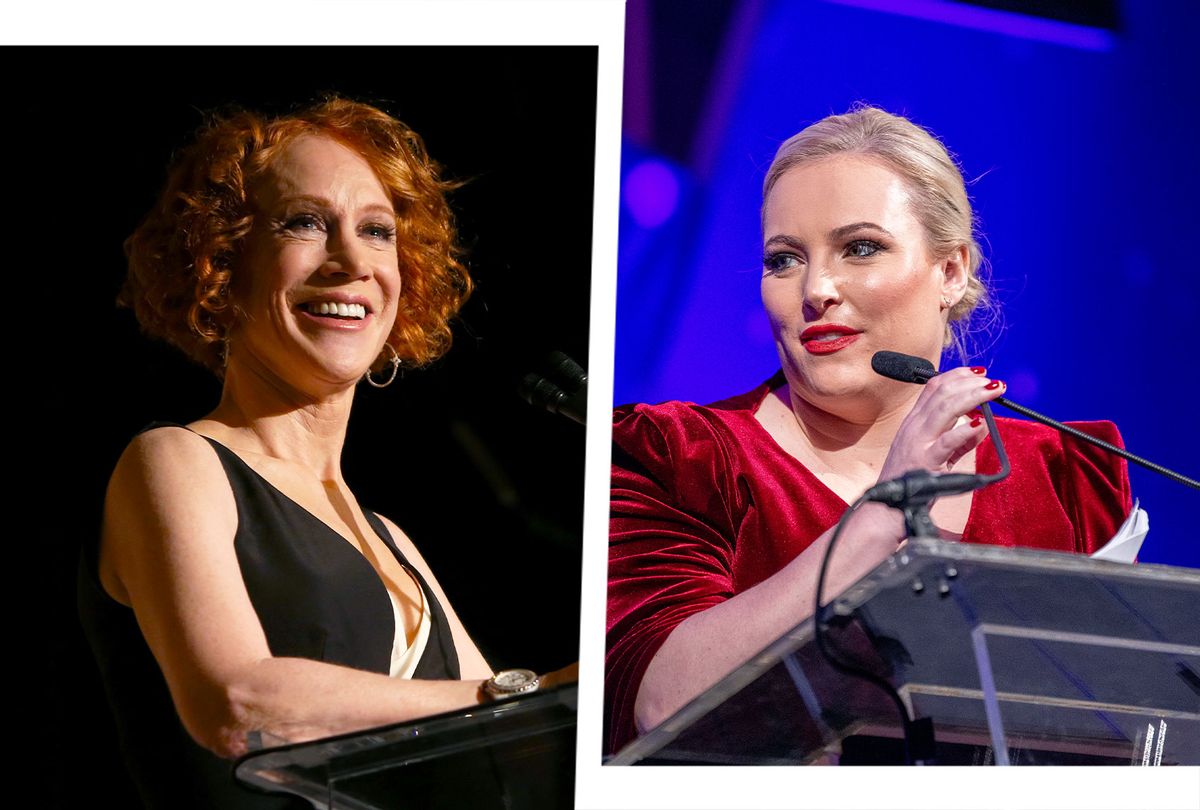 Kathy Griffin announced in a note posted to social media early Monday morning that she has lung cancer, and is going into surgery to have "half of [her] left lung removed" immediately. While the news inspired an outpouring of support from celebrities including fellow comic Sarah Silverman and actor Mia Farrow, not everyone had kind words for the controversial comedian.

In Meghan McCain's final Monday as a co-host of "The View," she responded to news about Griffin's diagnosis by stating at one point, "I don't like her, I'm never going to like her for all the jokes she made about Clay [Aiken]." McCain is referencing jokes made by Griffin over a decade ago about "American Idol" singer Clay Aiken being gay before he came out in 2008.

In Griffin's Instagram note originally announcing her diagnosis, the comedian wrote, "I've got to tell you guys something. I have cancer." Griffin's sister notably also had cancer, and Griffin shaved her head in 2017 to be in solidarity with her as she underwent chemotherapy. Her brother Gary died of cancer in 2014.

Griffin continues, "Yes, I have lung cancer even though I've never smoked! The doctors are very optimistic as it is stage one and contained to my left lung." After her surgery, she writes that she's hopeful she won't need "chemo or radiation," and she should be "up and running around as usual in a month or less."

McCain also deemed the revelation of Griffin's cancer diagnosis as the right time for her to apologize for past hurtful jokes. In particular, in reference to Griffin posting a photo on social media in 2017 of her holding what looks like the bloodied, decapitated head of Donald Trump, McCain seemed to liken Griffin to a terrorist organization.

"And I don't like her because I don't like seeing severed heads of anyone, any place, because it reminds me of what ISIS does to our soldiers," said McCain.

At the time, Griffin's anti-Trump joke resulted in CNN ending its deal with the comic and heated bipartisan furor against her, despite her apology. Griffin had described experiencing routine harassment and death threats from the former president's supporters, and struggled to find work. The fallout of Griffin's joke has been compared by some to the Dixie Chicks' near blacklisting from the music industry in the early 2000s for their criticism of George W. Bush and the Iraq War. Griffin's first comedy special since the incident came in 2019 with "Kathy Griffin: A Hell Of A Story."

Fellow "The View" co-host Whoopi Goldberg brought the conversation back on track on Monday's episode, turning away from Griffin's past actions and focusing on her diagnosis.

"For me, I think it was a really bad misstep. I disagree with you, Meghan, because I think had anyone seen that image of a severed head of someone — wouldn't matter who it was, left or right — I think the response we had initially was, 'This was a bad joke,'" Goldberg said. "I love Kathy Griffin. As a person, I don't want anyone to go through this. I'm sorry she went through this."

Based on McCain's Monday morning takes on Kathy Griffin, the co-host seems determined to close out her final week with a bang. In June, McCain announced her planned departure as a co-host of "The View," to a chorus of excitement on social media. After all, she's had quite the history of making controversial statements as early as her first appearance in October 2017.

McCain wasn't the only one on the attack on Monday though. The episode also featured Mary Trump, author and niece to former President Trump, promoting her new book, "The Reckoning." McCain was notably absent from the segment.

Mary, a vocal critic of her uncle, commented, "It's a shame that your colleague [McCain] didn't have the courage to come on and have this conversation with me, but I appreciate that you are all willing to take up these very difficult subjects because racism in my view is at the heart of everything that's wrong in 21st century America."

Trump's criticism of McCain seemed to shock even Goldberg, who was silent for seconds after Trump spoke.

The longstanding grudge had started just over a year ago. In July 2020, Trump had appeared on "The View" to promote her tell-all book about her uncle, aka "the world's most dangerous man." At the time, McCain made her disdain clear about such books, claiming they were one-sided and often written out of "revenge."

In her absence Monday, McCain didn't make any sort of response to Trump's latest appearance, but on social media, she did indicate her overall feelings about leaving "The View" behind. On Twitter, she posted the caption "4 more days" alongside a GIF of Elisabeth Moss' "Mad Men" character Peggy quitting her job like a boss.

Griffin, who is scheduled to open up about her diagnosis in an interview with Juju Chang on ABC News' Nightline on Monday evening, has yet to respond to McCain's explosive comments. As for McCain, it's unclear what she has lined up next after her time on "The View," but it doesn't sound like she has plans to forgive Griffin any time soon.