Leos Carax's musical (with tunes by Sparks) builds goodwill with surreal & seductive turns, but never pays it off 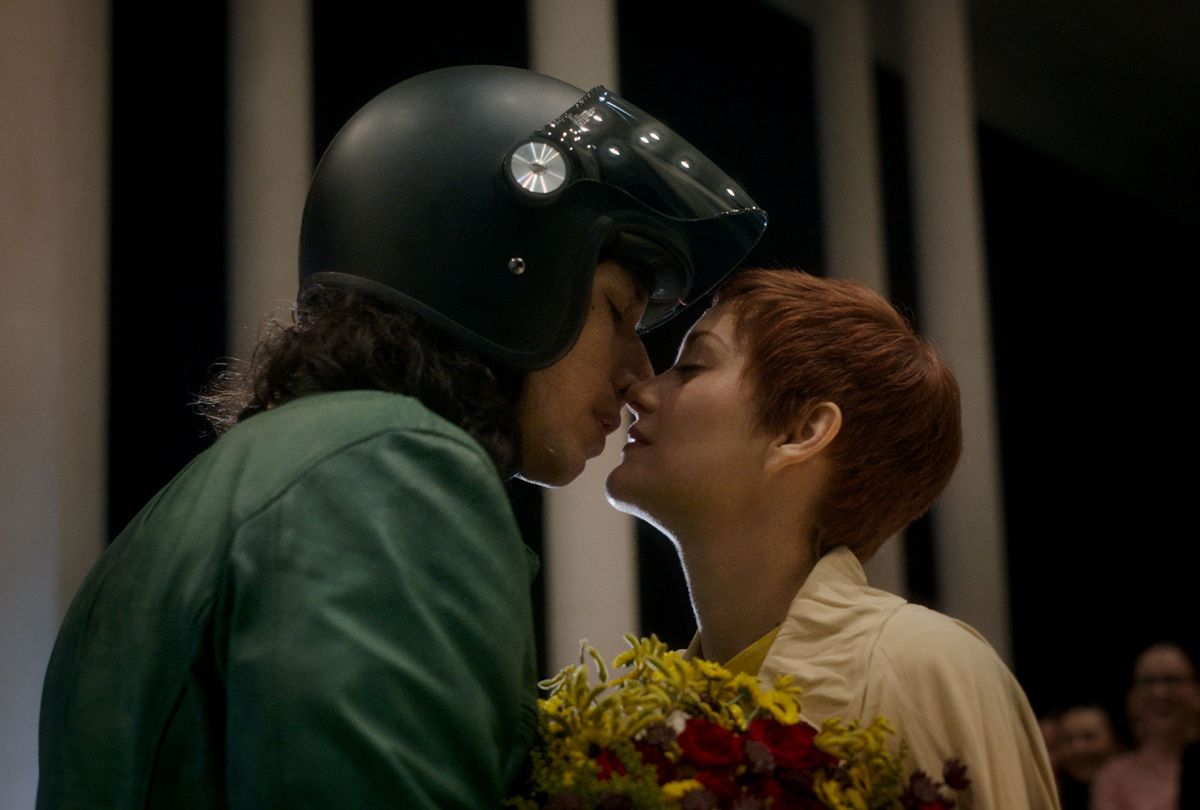 Visionary director Leos Carax's ambitious, audacious "Annette" opens with an infectious musical number, "So May We Start," that recalls a sublime moment from his superb film, "Holy Motors." Then it just becomes enervating. This downbeat musical is calculated to disarm and polarize audiences — and it will. Some will be enchanted and admire its riskiness; others will be exasperated and bored to the backteeth. But that does not make it good.

Before the endless singing begins — Sparks did all the songs — a voiceover asks for the audience's complete attention. However, it is hard not to let one's mind wander during this visually dynamic but emotionally stagnant film. "Annette" is thin on plot but long on running time (140 minutes).

Henry McHenry (Adam Driver) is a comedian with a sold-out hit show titled, "The Ape of God," and described as "a mildly offensive evening." It is an extended standup routine Henry performs in a bathrobe on stage. The audience asks why he became a comedian, and he replies, in call and response fashion, with sass and crass. He is decidedly lowbrow. In contrast, his girlfriend, Ann Defrasnoux (Marion Cotillard), an opera singer, is highbrow. She "dies and bows every night," as Henry observes. They are dubbed, "Beauty and the Bastard" by the press. The fictional "Showbizz News," interrupts "Annette" from time to time to sing reports about the couple's engagement, their baby, and their possible breakup.

The relationship between Henry and Ann is counterintuitive, and the couple notes this very fact in a song, "We Love Each Other So Much," which delightfully skewers the banality of love songs with that title phrase being repeated almost ad nauseum. "Annette" is engaging during these early scenes, as well as during an episode where Henry tickles Ann. (There is, admittedly, a real pleasure in seeing Driver make Cotillard squirm by licking her feet.)

Even when the film appears to be a series of loosely strung together set pieces, such as a meta-performance by Ann's accompanist (Simon Helberg), or a fabulous delivery room fugue, Carax keeps his audience intrigued if not in awe. The film gently tips into surrealism, with an ape portraying Henry in one shot, or Ann entering a forest while on stage during a performance. Even when an unexpected revelation is made about the nature of Annette, the couple's baby, viewers may go along with the film just to see where it is going.

But then "Annette" takes several turns for the worse. Six women have come forward accusing Henry of abuse, witnessing his violence and anger (in a song that sounds heavily influenced by Philip Glass). Henry's Las Vegas show bombs not kills, causing his star to go in decline. And something happens on a yacht during a storm that shifts the narrative in both unexpected and unpleasant ways.

As Carax pulls the rug and the floor out from under the audience, another twist happens — Henry makes a discovery about baby Annette that prompts him to take her on tour even as Ann's accompanist accuses Henry of exploiting the child.

And here is where the film will test viewers' patience and goodwill (if it hasn't already). It is not just that the plot gets dark, and the music more somber. The scenes go on too long, and they lack punch. There appears to be little payoff for having invested so much time with Henry, a monstrous, unlikable character, listening to his unfunny stage show, or watching him act like a Stage Dad for Annette.

What Carax is saying about the fickleness of celebrity and the perils of fame seems almost as obvious as "We Love Each Other So Much." There just does not seem to be any there there once the film finally arrives at where it is going.

Driver certainly seems to appreciate the opportunity to deliver such a complex and all-in performance. He is a fascinating actor, whose large frame can dominate the screen; Carax frequently films him shirtless practically fetishizing Driver's physique and massive size. However, Driver, along with his big broad shoulders, are forced to carry the weight of this film, and it may be too great a task. As Henry transforms over the course of "Annette," Driver changes his look and his demeanor skillfully, but it feels like he is expending considerable energy for nothing. His singing is not the greatest, and as the film peters out — the ending feels abrupt — one gets the sense that Driver is just exhausted and needed to stop.

In support, Cotillard looks lovely here, but she is woefully underused. Her character is undeveloped, even to the extent that there is something, never explained, involving her repeatedly munching on apples.

"Annette" is maddening because it engages the senses but rarely the emotions. The film may be stylish, and the visuals are accomplished — Carax uses superimposed images, strobe effects, and other visual gimmicks — but they cannot mask the fact that like Henry's shocking Vegas performance, the emperor has no clothes.

"Annette" opens in theaters on Friday, Aug. 6 and is available to stream Aug. 20 on Amazon.