Republicans ramp up the racism to deflect blame for COVID surge

Everyone knows that it is unvaccinated Trumpers spreading delta, but Republicans want to blame immigrants instead 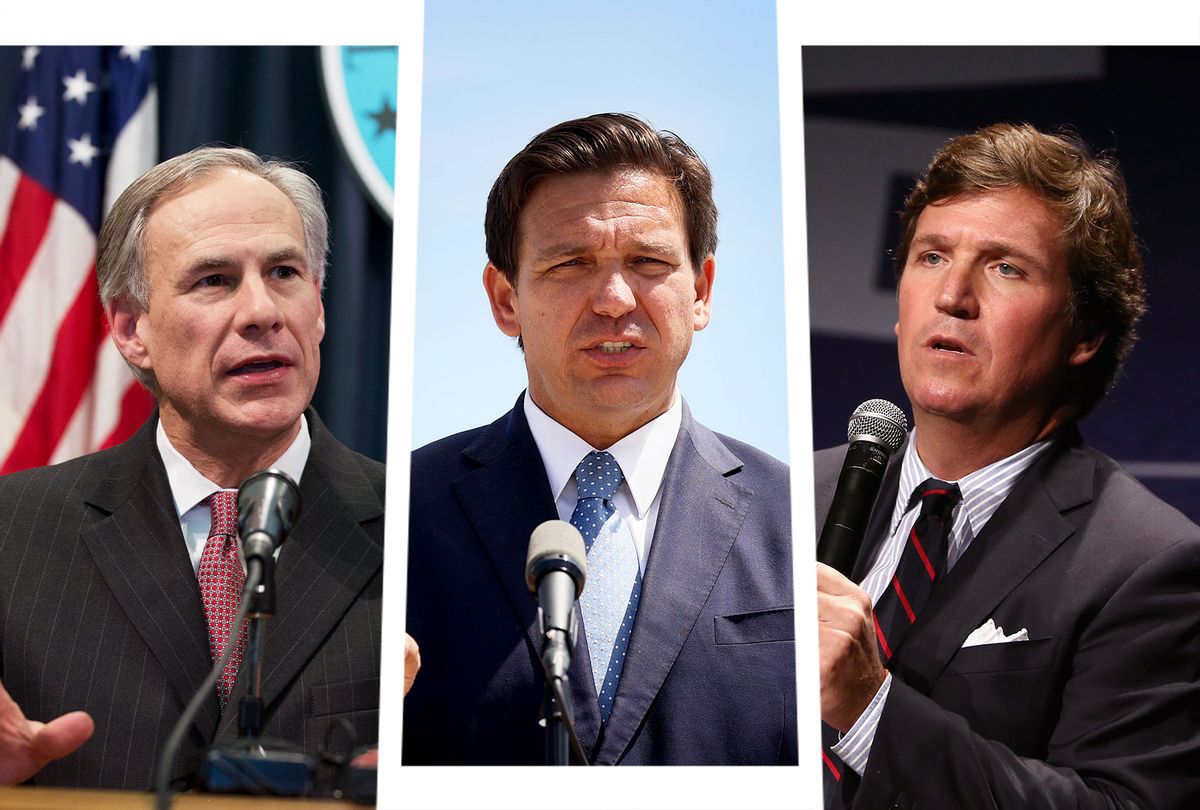 The GOP strategy to tank Joe Biden's presidency was supposed to be a simple one: jack up COVID-19 rates by convincing Fox News viewers that only filthy liberals get vaccinated, then blame Biden for the surge while a media plagued by bothsidesism plays along.

But the plan hit one little, unforeseen snag: The mainstream media, which did play along for a bit with headlines blaming Biden, suddenly switched gears in mid-July. The severity of the delta variant surge pushed the media to actually start covering both the anti-vaccine propaganda apparatus at Fox News and the fact that COVID-19 hot spots appeared concentrated in parts of the country where people mainline such propaganda. Now, the whole evil scheme has gone sideways. Polling shows Americans are blaming right-wingers and the unvaccinated instead of Biden — and now Republicans are in a panic.

And what do Republicans always do in a panic? Old-fashioned race-baiting.

Rather than blame the obvious culprits for the pandemic — Fox News-addled anti-vaxxers — Republicans are increasingly accusing immigrants at the Southern border of bringing in COVID-19, and Biden of supposedly letting them. After Biden rightfully called out Florida's Republican governor, Ron DeSantis, for his part in letting COVID-19 run rampant, DeSantis pitifully tried to hit back by claiming Biden "imported more virus from around the world by having a wide-open southern border."

Other Republican politicians have been echoing this "blame Mexico" talking point, from Sen. Ted Cruz of Texas accusing the Biden administration of allowing a "super spreader event because their open border" to Iowa Gov. Kim Reynolds arguing that "the problem is the southern border is open."

Unsurprisingly, Fox News is leaning hard into this "blame immigrants, not the unvaccinated" messaging, often with a side dose of contrasting the supposedly dangerous dark-skinned immigrants with the supposedly pristine lighter-skinned people around the world.

Bret Baier of Fox News was interviewing Centers for Disease Control head Rochelle Walensky last week and complained that his "in-laws live in Austria, they cannot come here to see their six-month-old baby because of the EU travel ban," but that "migrants come across the southern border from other countries with more COVID." Walensky calmly replied, "what we really need to do is spend our time getting our communities vaccinated," but of course, Breitbart and other right-wing outlets portrayed her as somehow too "woke" to deal with the scary disease-ridden foreigners who they clearly believe are identifiable via skin color.

As usual, there's a heavy amount of coordination on the right around the new, race-baiting tactic. The Wall Street Journal and New York Post are both on the blame-immigrants-not-the-unvaccinated train. And Fox News is a steady drumbeat of scare stories about COVID-positive immigrants, all meant to give viewers an excuse for remaining unvaccinated because they can blame "dirty" immigrants instead of the homegrown unvaccinated Americans who are passing the disease rapidly.

It's all, of course, completely ridiculous. Glenn Kessler wrote a Washington Post fact check that focused on COVID-19 rates among border crossers, noting "so far we do not see evidence to support" the claim that it's a major factor in the current surge. But frankly, Kessler's fact check severely understates the case, from a sheer mathematical point of view. Thousands of unvaccinated immigrants at the border simply do not have the numbers to be a greater threat to public health than literally millions of native-born Americans who refuse to get vaccinated.

Any fool who can read a map sees the main problem with the "blame the border" gambit, which is the parts of the U.S. that actually border Mexico are seeing less of a surge than parts that other parts that border water and/or border other U.S. states.

Yep, the hot spots are running through the Bible Belt more than the Southwest. We also have actual scientific data that shows the delta variant surge that's causing our current woes is flowing more through Branson, Missouri — where vaccine-eschewing GOP America goes to party — than McAllen, TX.

None of this makes any logical sense, and not just because the Biden administration does have policies to turn people away at the border for being a COVID-19 threat. Even if one accepts the premise that immigrants are adding in any significant way to the COVID-19 problem, why is that an excuse not to get vaccinated? One would think that a belief that people are bringing in COVID-19 is all the more reason to do what offers, by far, the highest level of protection: vaccination.  And yet "scary brown-skinned immigrants are bringing disease!" is being used as a justification by white conservatives to avoid taking basic prevention measures.

Of course, none of it is meant to be rational.

Republicans are turning to racism for the same reason they always do, to turn off any remaining capacity for critical thinking among their base, replacing it with inchoate fear and rage over the very existence of people that don't look or talk or act exactly like them. As usual, the GOP elite doesn't care how many people get sick or die. All they care about is giving their voters some stupid thing to rant and rave about, so they can shut off their brains and not think about how foolish it is to keep voting for people who are killing them to score political points.

Will this new "blame immigrants, not the unvaccinated" narrative work? It will, in the same way the "blame China" gambit worked: To give Fox News viewers a talking point to scream at relatives who express concerns about their unvaccinated status and give Republican politicians a way to make noise while running away from their own responsibility for this crisis.

What it won't do is cause the COVID-19 surge to end any time soon. For that to happen, ordinary Republicans need to suck it up and start getting vaccinated in larger numbers. And the longer that their leaders keep feeding them excuses not to do so — such as blaming immigrants — the longer this pandemic will drag out. And the longer that goes on, the angrier the vaccinated majority will get with unvaccinated red hats for being such selfish, whiny babies in the face of a global pandemic.