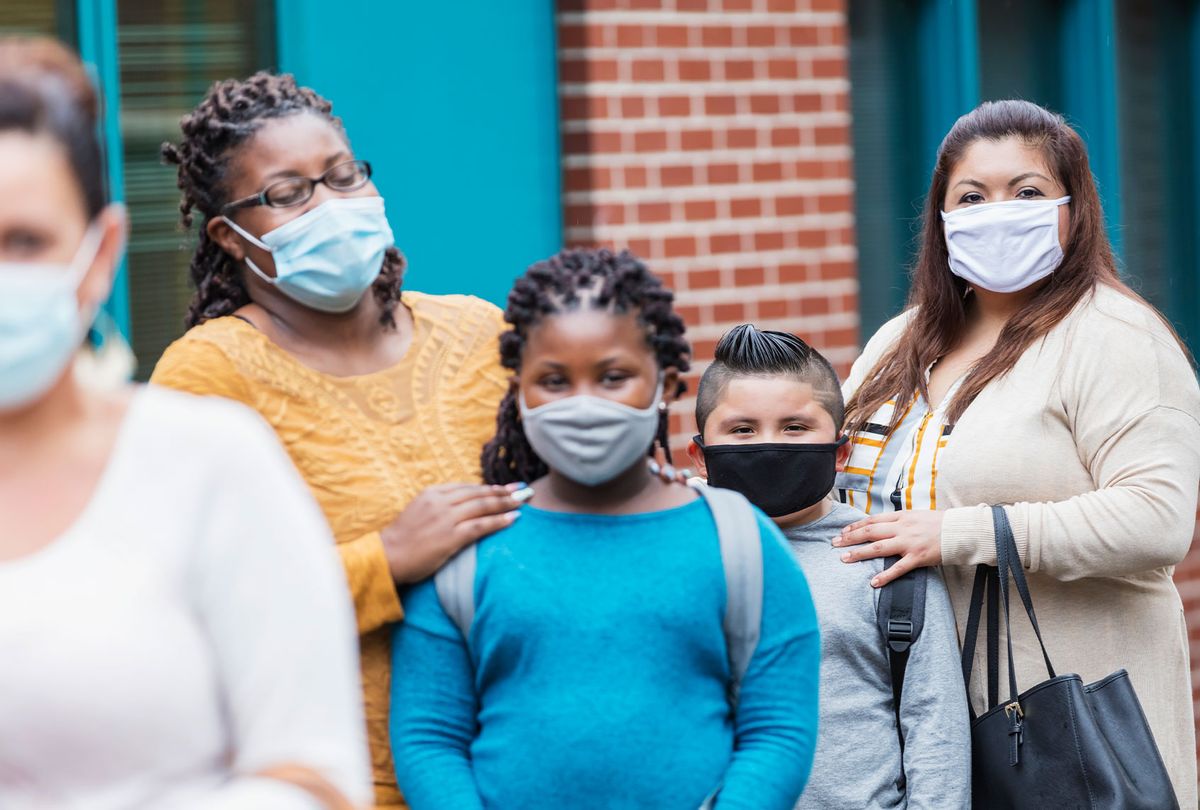 Mothers with children, back to school during covid-19 (Getty Images)
--

In May 2021, at the conclusion of an exhausting school year characterized by recurrent lockdowns and piecemeal plans for virtual learning, many parents felt as though hope were around the corner. Vaccines were becoming increasingly available, which neatly coincided with COVID-19 cases across the country on the decline. There were whispers that teens and young children would be able to get vaccines by the beginning of the next school year. And scientific analysis of rare COVID-19 outbreaks in school settings showed that mitigation strategies like masking and social distancing worked and provided children with safe places for in-school learning, without vaccines in the picture.

Accordingly, most of the nation's school districts — and parents of school-age children — planned for a slightly more "normal" 2021-2022 school year. Amanda Herman, who has three children between the ages of two and eleven, was among the optimistic parents who, earlier this summer, was eager to re-enroll her kids in school for the 2021-2022 school year.

"I was ready at the end of spring; I was like, 'okay this is great and we're good,'" Herman said. "Homeschooling was not great for everyone's mental health, but I think it would have been better if we were not in a pandemic."

How things have changed in the past three months. Children under 12 almost certainly won't be eligible for a vaccine by next month, and COVID-19 cases have risen dramatically nationwide due to the highly transmissible delta variant. Now, that feeling of hope that Herman had back in May has been supplanted by an all-too-familiar sense of dread.

"I'm becoming more anxious, again, now that everybody's enrolled and we're getting ready to go back," said Herman. "There's people coming to our school board meeting, saying that they don't want the kids wearing masks, protests at the local high school, a whole group of people online saying that they're just going to send their kids without masks and say that they don't have to wear them."

One of Herman's children has asthma, which is one reason why the possibility of children not wearing masks to school is highly disconcerting to her as a parent. Despite re-enrolling her children to in-school learning, Herman and her husband are seriously considering a last minute pivot — possibly back to homeschooling.

"It's scary," Herman said. "Especially when you hear what's going on in the South."

Herman is one of several parents of children under 12 whom Salon spoke with. Some have children who are immunocompromised; others live in more conservative states where mask-wearing has been politicized. No matter their individual situation, all are exhausted.

As Herman alluded to, children's hospitals in many red states with low vaccination rates — like Florida, Texas, and Louisiana — have pediatric units filling up with kids who have COVID-19.

Until the spread of delta, parents of school-age children might have found solace in data that showed transmission of COVID-19 among children was rare. If children did get infected, the likelihood of a severe outcome was low. While that appears to mostly still be the case, cases among children are now on the rise. As reported by the American Pediatric Association (APA), in the week before Aug. 5, 94,000 children tested positive for COVID-19 — a 31 percent increase in the number of cases from the previous week. In total that week, children accounted for 15 percent of all COVID-19 cases.

Fortunately, the APA reported that hospitalization and death remain "uncommon." In states where data was available, according to their analysis, less than 2 percent of all child COVID-19 cases required hospitalization; 0.00% to 0.03% were fatal.

"This virus is really tracking the unvaccinated," Dr. Yvonne Maldonado, a professor of pediatrics and infectious diseases at Stanford University, told NPR. "Because children under 12 are not able to be vaccinated, we're just seeing the same increase in infections in that group because [the delta variant] is so infectious."

This is in part why both the Centers for Disease Control and Prevention (CDC) and the American Academy of Pediatrics' (AAP) latest updated guidance for schools, and now recommend that all students over 2 years old, along with staff, wear masks regardless of their vaccination status.

"In addition to universal indoor masking, CDC recommends schools maintain at least 3 feet of physical distance between students within classrooms to reduce transmission risk," the CDC states. "When it is not possible to maintain a physical distance of at least 3 feet, such as when schools cannot fully reopen while maintaining these distances, it is especially important to layer multiple other prevention strategies, such as screening testing."

But these are just recommendations. As Salon has previously reported, not all states and school districts have committed to following and implementing them.

Bobby Mathews of Hoover, Alabama, was struggling with the decision to send his two children, ages ten and six, back to a school that does not require masks nor do contact tracing in the event of an outbreak. Virtual learning, Matthews said, was off the table all summer, too. Finally, after a group of parents fought against the lack of masking, the school agreed to implement a 30-day mask mandate.

Mathews, who said he and his wife were "angry" and "anxious" about the situation, considered homeschooling as an alternative, or even moving school districts. Now, with the month-long mask mandate, Mathews decided to send his children back to school and "push for metrics" to be presented after the month is up.

"We are kind of celebrating this as a victory," Mathews said. "Right now we just have this huge sense of relief and almost joy at this very small victory. It's hard because my kids want to go back to school, my kids want to see other children."

But after 30 days, he knows they will have to "reevaluate."

"We all want to get back to that normalcy, but you can't just pretend that everything's gonna be okay," Mathews said, adding that he and his family moved to Hoover in part because it had one of the best reputations for schools in the state. He has been shocked by the lack of consideration for his children's safety and wellness during this time by people who he previously believed had their best interest at heart.

"This has already developed a lot of fissures and I don't know if they can be healed," he said. "This has shown me that I can't trust people that I ought to be able to trust — people who are supposed to be in charge of my kids."

Parents of younger children face a similar dilemma with preschools. Alison Manor, parent to a three-year-old and an eight-month-old infant, has been hemming over whether to send her daughter to preschool or wait a while longer.

"At this point she really hasn't interacted with other kids — she was only a year-and-a-half when lockdown started," Manor said. "We're so excited about preschool, but now it's like, with delta, it's really become really hard to make that decision — even with her wearing a mask."

Manor is on the fence because COVID-19 cases are rising in her county, and Manor and her daughter already had COVID-19 once. Manor lost all feeling in her hands due to it, and hasn't regained it. Even with masking, Manor is worried about the vaccination status of the teachers, assistants, and other children's parents.

Until her children can get vaccinated, she likely won't feel totally comfortable sending them to school.

"[My daughter] had it before — and I don't know if she has any long-term COVID effects from the one she had previously. Do I really want to take that chance if I can wait another six months?" Manor asked. "I'm not sure."

Now, Manor must confront this renewed feeling of uncertainty.

"We were so hopeful," Manor said.