If one person's crazy beliefs suddenly become mainstream, that is malignant normality 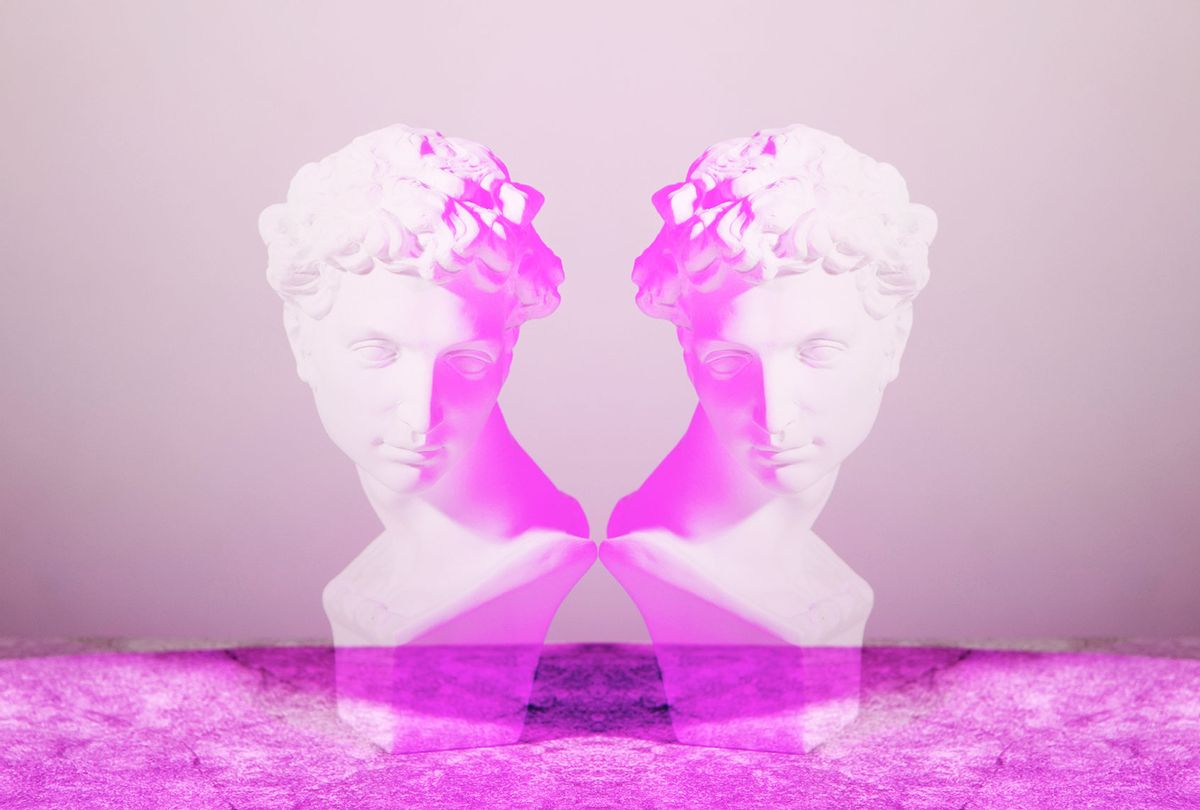 There are many variations to Hans Christian Andersen's classic literary folktale "The Emperor's New Clothes," but most have the same basic plot points: A vain emperor is duped by two con men into buying clothes that don't exist. They trick him by saying that the non-existent fabric is actually visible, but only stupid and incompetent people can't see it. The emperor pretends that he can see the clothes, and then ordinary people follow his lead — whether because they believe him, or because they are simply afraid to state otherwise. It is only when a child blurts out that he is naked that the illusion is shattered.

Andersen was unfamiliar with the psychological concept known as malignant normality, but his tale captures it perfectly. The folktale also teaches an important lesson about standing by one's own common sense, even when social pressures are insurmountable, and remembering that confidence in your correctness is not enough on its own — particularly if those around you don't buy in too. And the idea — of a narcissist with power and/or popularity normalizing an "alternate reality" that is patently absurd — clearly has analogues in schoolyard politics, global politics, and everything in-between.

The concept of malignant normality, as explained by psychiatrist Dr. Robert Jay Lifton, is rooted in history — specifically, in our understanding of Nazi Germany. Lifton argued that many Nazi doctors weren't active ideologues, but were willing to send Jews to gas chambers because this was their job — even though they had taken a hippocratic oath.

The reality of institutionalized genocide, which had not seemed plausible to Germans only a dozen years earlier, had become a malignant normal. Not everyone had to buy into the ideas of Nazism, at least not in full. They simply had to live in a society where actions that would usually be considered atrocious are instead perceived as routine. In turn, while they didn't have to believe in Hitler's lies, they had to at least accept that a social order based around those lies could be legitimate. The moral system and fundamental political beliefs of millions of people had been radically altered — and all of it based on a narcissist's word.

That last detail is crucial to understanding malignant normality, clinical psychologist Dr. Ramani Durvasula told Salon. Durvasula, who has done research in the area of narcissism and high conflict personalities (which is part and parcel to malignant normality), told Salon that malignant normalities are mass delusions that originate from a specific source. In the case of the Nazis, Adolf Hitler channeled his personal grievances and ideological obsessions into a philosophy that was embraced by millions who held his word to be infallible. Hitler flat-out fabricated conspiracy theories about Jewish world domination, plots against him and other Nazis, and the supposed causes of German woes. By virtue of him saying these things, they were held to be true — and the consequences were World War II and the Holocaust.

"Delusion as a psychotic symptom is a break from reality," Durvasula told Salon, citing as examples people who think they can talk to Martians or believe the FBI is reading their thoughts.

While most individuals would tell someone who harbors those beliefs that they are delusional, however, a malignant normality will be reinforced by numerous outside sources. News outlets, religious institutions, political commentators and even entertainers will constantly telling a believer that a certain falsehood is true. The delusion, because it is shared by the masses, seems credible. Yet a mass delusion is not in itself the same thing as a malignant normality.

Psychologist Dr. John Gartner, who has studied narcissistic behavior and circulated a petition to remove President Donald Trump from power because of his alleged mental illnesses, told Salon that the unique form of "mass psychosis" known as malignant normality is "basically organized from the top." It depends on an individual or institution deliberately lying and having that lie reinforced through apparatuses that people view as potentially credible.

Dr. David M. Reiss, a psychiatrist who has worked on cases involving borderline and narcissistic personality disorders, explained to Salon that he sees four types of people who are susceptible to believing in a malignant normality. He noted that these categories do overlap. The first group are people who are already narcissistic and connect with another narcissist. (There is a condition related to this called narcissism by proxy.) The second are people who have sadistic or nihilistic aspects to their personalities and feel empowered to act them out by embracing a narcissist's lies. There are also people who, through neediness, are attracted to those who appear very powerful without malice or really thinking through their attraction.

Finally, there are those who "are sincerely confused and gaslighted, where they're basically put in the position where a person with power — and it doesn't have to be political power, it could be power within a family — is telling [them] something that has absolutely goes against reality."

That group of people are left feeling that either they or those they trust are crazy — and each option is terrifying in its own way.

And what kind of person who would be "at the top" in a malignant normality? The answer, not surprisingly, is a malignant narcissist. Like Hitler being rejected as an artist or Trump losing an election, the malignant narcissist channels personal failures into a larger cause, then uses their charisma to sweep others along with them.

"They're not just narcissists," Gartner explained. "They experience themselves as being under attack by bad people. So all the negativity is projected outward. They can never be responsible for anything because they think they've never done anything wrong, but they're victims of unfair attacks." Such malignant narcissists propagandize the notion that "bad people — Jews, immigrants, liberals, whatever — are trying to destroy us and to destroy our society. And therefore, anything we do to them is justified."

It must be emphasized that malignant normalities are not limited to politics. According to Olivia James, a London-based therapist who specializes in trauma and has interacted with many malignant narcissists, we can succumb to malignant narcissists in many ways. Examples include those who get suckered in by multi-level marketing campaigns or other cultish business ventures.

"Any criticism of the Guru or Founder or their promises is treated as your problem, your negativity, your shadow," James told Salon by email. "Any doubts can also be treated as a test of your faith. So you quash them and keep mainlining the Kool-Aid. You and your fellow believers are also like a tribe — there is a sense of belonging and connection."

She added, "When people eventually realize they've been scammed, they crash very hard. I've treated these cases. Betrayal is one of the most serious types of trauma. We exist in connection with others."

Durvasula also cited cults as an example, noting that cult leaders follow the same pattern: "they get their followers and then give them an alternative framework for reality. And everybody in the cults believes that to the tune of walking away from their families, giving up all their money, giving their identity, giving up their identities, everything." This creates a system of pressures that make it difficult for people in the cult to leave, both because their sense of reality is warped and because they fear what awaits them if they admit to having erred.

NXIVM, for instance, is a good example of high-functioning people who completely brought into the malignant normality offered by Keith Raniere," the cult leader, Durvasula noted.

And yes, the concept of malignant normality very much applies to Trump. This is not because Trump is a Republican or a conservative. There are conservative politicians like Mitt Romney who base their arguments on a foundation of fact, and there are liberals who accept malignant normalities promoted by their own. The key here is that a politician creates a malignant normality when they convince people that flat-out falsehoods are true, or that drastic breaches in moral order are somehow acceptable. It is the difference between believing that Trump should have won the 2020 election, which is subjective, and saying that he did win that election, a belief that exists solely because of Trump's fabulism.

"Trump's insistence that he's a 'very stable genius' while denigrating the work of actual geniuses and experts, and relentlessly gaslighting anyone who challenges him, is the ultimate in narcissism and in malignant normality," Dr. Deborah J. Cohan, a professor of sociology at University of South Carolina–Beaufort, told Salon by email. She described how Trump has been able to normalize a bullying behavior that did not exist before him and has been effective at using media to make his version of reality a part of our political mainstream, even when it is entirely based on lies.

"During every week of Trump's presidency, the nation watched as he sunk to a new low in terms of his attitudes and behaviors, and we got used to living in an abyss," Cohan explained. "That is malignant normality. We have grown numb to things that are cruel and perverse."

In a liberal democracy whose primary tenet is rationalism, it is clear that malignant normality is an aberration that threatens the organization of society. So is there any way to stop it?

"To some extent, a lot of people aren't going to until they're confronted, until there's an intervention, until circumstances change," Reiss told Salon. "But if you do have some self-awareness and you want to check it, it's basically fact-checking what you're doing."

Durvasula explained that "it's really, really not easy because what you've got to do is the only way to offset that kind of malignant normality sort of induced delusion is typically to provide alternate sources of information." It is possible for someone to question their beliefs if a person they trust subtly sows doubts or if being wrong hurts them in a way so serious that they can't ignore it. Even then, though, it may not work.

"It's almost like trying to take away a person's religion or their God," Durvasula told Salon. "They don't want you to do that. And so it's a really, really hard sell. And I think we're now seeing the downstream effect of again, what I consider to be population-level gaslighting."