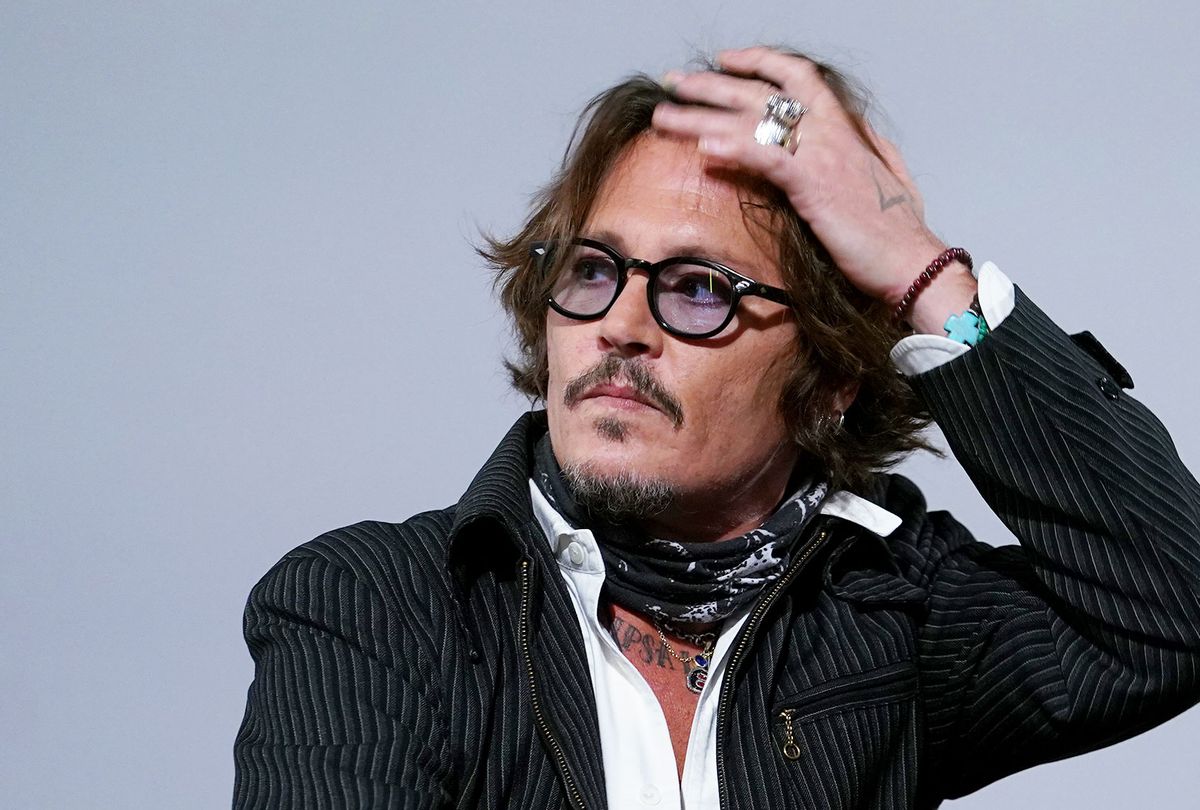 For a man who claims to be a victim of Hollywood boycotting, Johnny Depp sure has been in the spotlight a lot these days. In a Sunday Times interview this week, Depp claimed outright he is being "boycotted by Hollywood," specifically in light of his most recent film "Minamata" not yet receiving a release date in the U.S.

The supposed "boycott" follows Depp's 2016 divorce from actress Amber Heard, in which Heard accused him of domestic violence, calling him a "monster" and claiming he beat her, sliced his own finger to write messages to her in blood, and more. Heard provided photos and screenshots of text messages that seemed to corroborate her allegations. The couple eventually settled their case out of court, and Depp continues to deny Heard's claims.

As of Aug. 17, PEOPLE reports Depp has been permitted to move forward with a $50 million defamation lawsuit against Heard over her 2018 Washington post op ed, in which Heard describes surviving domestic violence without naming Depp. Heard asked for his lawsuit to be dismissed in 2019, citing a UK judgment that sided with a British tabloid that called Depp a "wife-beater" in Depp's libel suit against the publication. But on Tuesday, a judge allowed Depp's lawsuit to move forward.

Since 2016, Depp has faced consequences for the abuse allegations, including being dropped from his previous role in the Harry Potter film "Fantastic Beasts," and losing the aforementioned libel lawsuit in the UK. Still, it's hard to see him as the hapless victim of cancel culture he's now posturing as.

In 2016, Forbes estimated the actor's net worth stands close to $50 million, which is quite a hefty sum to retire on, even if he were, indeed, being boycotted. His suit against the woman he allegedly assaulted and tormented, which could earn him as much as $50 million, has been given the green light this week. And then, of course, the star was just honored by two European film festivals this month. The Czech Karlovy Vary International Film Festival announced it would honor Depp, while the San Sebastian festival in Spain presented him with its Donostia Award to honor the actor's "outstanding contributions to the film world."

Even if there are some in the American entertainment industry who may be understandably hesitant to work with a man who has been accused of horrific violence against an ex partner for optics' sake, Depp's seemingly untouched reputation in the film world of Europe reminds us that there will always be second chances and other opportunities for men like him — no matter how much they may publicly render themselves the victims of their own narratives.

Depp is hardly the first disgraced, and allegedly abusive or otherwise problematic American artist to be embraced in Europe, joining the ranks of Roman Polanski, Woody Allen, and more recently, Kevin Spacey — notably all accused of child sexual abuse — in this market. Are the MeToo movement and its "boycotts" really ruining these men's lives, as they and their defenders often claim? Or is feminist cultural backlash really just propelling them on to the next opportunity lined up for them elsewhere, in spaces that are less concerned with the treatment of women?

There will always be excuses for powerful men like Depp who face allegations of violence and abuse. The director of the San Sebastian film festival that honored Depp defended their choice by noting that he had "not been arrested, charged nor convicted of any form of assault or violence against women" — a stunningly ignorant statement to anyone even vaguely familiar with how the American criminal justice system has long dismissed or punished victims, and often aided and protected abusers.

The excuses for disregarding the accusations about Depp don't stop with Spanish film festival directors. When he was sued in 2018 for allegedly punching a male set worker on a drunken tirade, the lawsuit was met with none of the same skepticism, disbelief and defensiveness that Heard faced for her claims of abuse. The double standard in our cultural reaction to the two allegations of abuse — one of the claims entailing gendered violence — is a jarring display of the power of rape culture and patriarchy in determining who is and isn't accorded credibility and public trust.

Those who defend Depp's "art" often rely on the tired argument that someone's private behaviors — as if all allegations of abuse are as casual as "private behaviors" — and their work are somehow separable. But people who are accused of abuse can endanger those around them whether in private or at work. Abuse and misogyny can infect the art that artists create, and also make everyone they work with feel unsafe.

Fellow creators in the entertainment industry may not choose to work with someone for any number of reasons — just ask the women and artists and creators of color who will never have the opportunities Depp has had. Allegations of domestic abuse are probably the most valid reason possible to choose not to work with someone. And still, despite this, Depp is one of many powerful men who have received second chances, new opportunities, and honors and recognition, even after being subject to accusations of sexual misconduct. Louis C.K. (who has admitted to his misconduct) is on a comedy tour, sarcastically posing in front of "SORRY" signs. Bill Cosby's conviction for sexual assault was overturned last month, and he's predictably trying to make a comeback. Chris Matthews was all over network TV in June, after departing MSNBC over sexual misconduct allegations. Jeffrey Toobin is back in his role at CNN after notoriously being caught masturbating on a Zoom call last year.

Still, Depp is the ultimate victim in the eyes of his fans. No matter how much he may whine and self-pityingly equate growing industry concerns about gender-based violence as a wrongful "boycott" against him, he continues to hold tremendous power. Over the course of the summer, legions of Johnny Depp fans engaged in a massive internet campaign push to have Heard removed from her role in the next "Aquaman" film. He remains the toast of the European film scene and stands to potentially make millions off of his ex-wife's lawsuit over an op ed about surviving domestic abuse.

Depp is, by all means, still a vastly powerful man — and that's precisely why he takes perceived slights, like being denied an American release date for one of his films, so harshly. To hold so much power and face any amount of accountability is intolerable, or, in his own words, a literal "boycott."