Brace yourself for the Bill Cosby media redemption tour

In the comedy world he may still be persona non grata. But can TV news divisions resist the ratings he'd pull in? 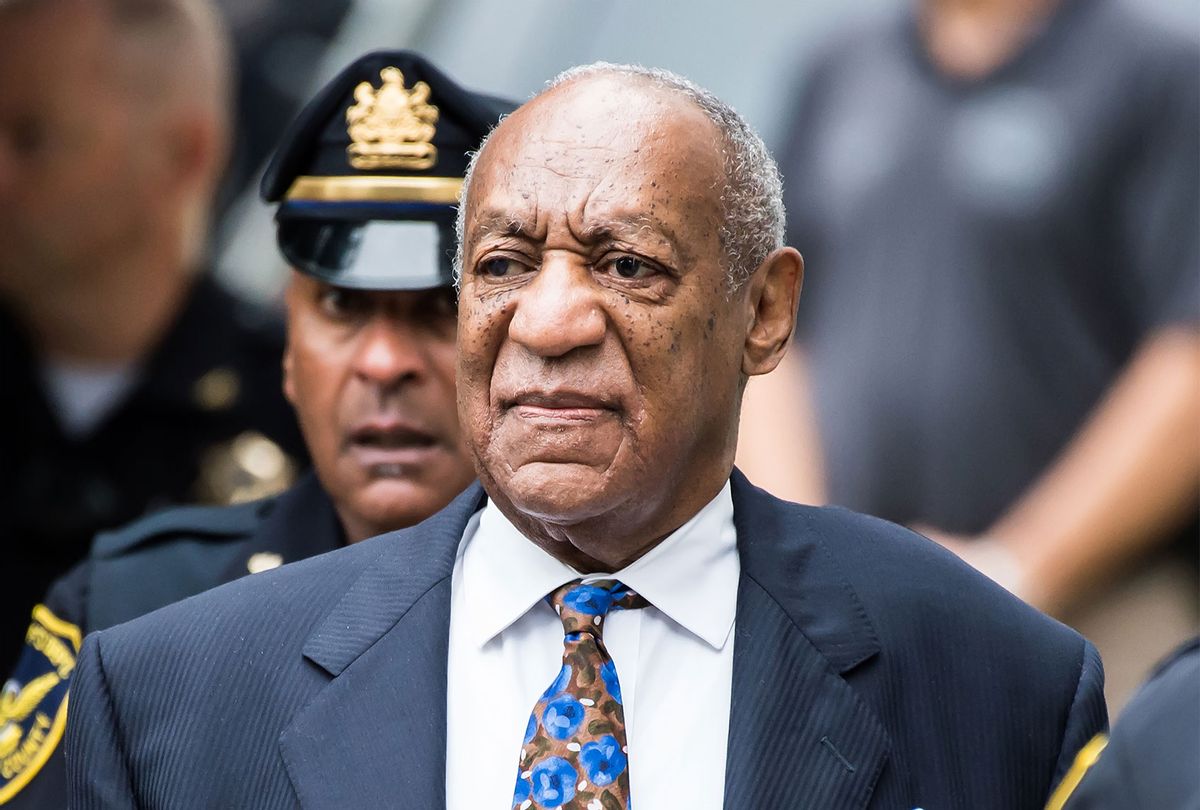 Get ready, because the kickoff of Bill Cosby's Media Redemption Tour is coming 'round the bend in the wake of his overturned conviction and abrupt release from prison. Who knows which outlet will be the opening venue or which interviewer will serve as the emcee? Not I. But trust me when I say broadcast and cable TV newsrooms are probably falling all over themselves to book him as I type this.

As for whomever lands the assignment of sitting across from the disgraced comedian and earnestly trying to get him to answer for the allegations of sexual assault made by any of his 60 accusers, that's going to be a tough gig. Part of that person's job will be getting him explain how he can maintain his innocence, as he did after his release on Wednesday, despite admitting to incriminating acts in the deposition at the heart of Andrea Constand's 2005 civil case.

Will the task fall to CBS's "60 Minutes" and Anderson Cooper?  Maybe NBC's "Today" will assign Savannah Guthrie to take it on. ABC may throw it to Robin Roberts, Diane Sawyer or Deborah Roberts. All of these are wild guesses. I truly have no clue who will do this.

Truth is, it doesn't really matter. The only party that will benefit in any lasting way will be Cosby himself.

This is how America works, right? You know, being the land of second chances and next acts, yadda yadda yadda. When famous men fall from grace, we lambaste them for a short (but, respectable!) amount of time before someone, usually other men, begin musing about when it will be OK for them to return to the business of being huge stars.

Louis C.K. was accused of sexual misconduct by five women in November 2017. By April 2018 The Hollywood Reporter engaged a group of comics and club owners to discuss how he could stage his comeback. Guess what? Later that year, he did.

Matt Lauer and Charlie Rose were each accused of sexual misconduct in 2017 and pushed out of their jobs as well. Like clockwork, by 2018 people were expressing curiosity as to what they would do next. Moreover, concerned citizens wondered aloud how long these poor unfortunate souls should have to suffer for their sins.

Ask Kevin Spacey, who was also accused of multiple sexual assaults and other misconduct in 2018 and recently landed a role in an Italian film.

Aside from Spacey, none of those aforementioned celebrities were alleged to have raped or sexually assaulted dozens of people, which makes Cosby's situation closer in resemblance to that of Harvey Weinstein. The fallen film producer recently filed an appeal in New York State's Supreme court, challenging his 2020 conviction for two felony sex crimes. But the public never loved Weinstein, merely the movies he produced. Whereas to this day, far too many people still picture Cosby as America's dad.

Bottom line, somebody must be furiously angling for that one-on-one.

Let me be clear: Nothing would make me happier than to be wrong about any of this.

Maybe the 83-year-old performer will announce he's retreating from public life, never to be heard from again.

Perhaps network news divisions will make the collective decision that they refuse to be used as a launchpad for an image-restoration campaign of a man who has been multiply and credibly accused of rape and sexual assault, and . . . OK I need to stop, I'm laughing. Nope. Never gonna happen.

However, news divisions might choose instead to continue elevating the voices of Cosby's accusers in the wake of all this and have them strive to verbalize how they feel right now, something Joy Reid did immediately by speaking with accuser Heidi Thomas for Wednesday's edition of "The ReidOut" on MSNBC.

This will be the route many will choose initially because these survivors are still bravely speaking up. They have already been through hell for coming forward in the first place. Now that this shred of delayed justice has been ripped from them, what else do they have to lose?

In a split decision, the Pennsylvania Supreme Court overturned Cosby's 2018 conviction for sexual assault — but not because there's any evidence he is innocent. It happened because the once-beloved Jell-O Pudding Pop spokesman had previously cut a morally reprehensible deal with former Montgomery County prosecutor Bruce Castor.

Castor, who went on to become Donald Trump's famously inept lawyer in his second impeachment trial, agreed in 2005 not to criminally prosecute Cosby in exchange for the performer giving a deposition in the civil case brought by Constand, a Temple University sports administrator.

In that deposition, Cosby admitted to drugging women with Quaaludes, knowing it was illegal to do so, and then having sex with them. He maintained that all these encounters were consensual. Sixty women insist that what happened between Cosby and them was anything but.

Having experts explain what message the highest court in the Keystone State is sending to other sexual assault survivors, and returning to those experts regularly to remind us of the rolling trauma this turn of events is likely to create, is the responsible thing to do.

But in what version of the sacred timeline do you see any of them resisting putting Cosby on the air? Not this one.

Expecting TV newscasters to adhere to what they should do doesn't take into account the business side of matters. It's not that simple, the non-cynical, unemotional explainer of How Things Work might say. And that's true. A Cosby interview would draw huge ratings and bring in healthy ad revenue.

Besides, network and cable news interviews feature reprehensible people regularly as part of their mission to serve the public's interest. That last part is key. Barbara Walter's 1989 interview with Libyan dictator Moammar Gadhafi is a defining example of a sit-down that revealed much about a man who was unfamiliar to most of us. The 1998 interview ABC News reporter John Miller scored with Osama bin Laden, a full three years before 9/11, was a warning. We didn't realize that, of course, until the unthinkable happened.

Interviewing celebrities caught up in criminal cases is more fraught because of the fandom factor. No amount of documentation or testimony will lessen the support of R. Kelly's diehards, despite everything revealed in Lifetime's "Surviving R. Kelly." Same goes for Michael Jackson.

Cosby may have been convicted of drugging and assaulting Constand in 2004 and spent nearly three years in prison for it, but to millions he's a symbol of decency even now. At no point during his time behind bars did he entirely lose his loyal audience.

Unlike the case of another performer whose image is somewhat synonymous with 1980s, Twitter didn't de-platform Cosby. All this time he's been communicating regularly in some fashion with his 3.2 million followers, including on Wednesday, when he declared, "I have never changed my stance nor my story. I have always maintained my innocence."

Rewarding their loyalty has paid off. Simply mentioning the rape accusations made against the late Kobe Bryant in a 2020 interview with Lisa Leslie earned Gayle King death threats and inspired Cosby to praise Snoop Dogg for dragging King — calling her a "funky dog-head b***h" among other invectives.

The academic question — again, it doesn't matter — is whether getting Cosby's side of the situation serves anybody's interests, beyond the network in question and Cosby himself. Even if producers check all the boxes — flanking whatever he says with quotes from the deposition and input from a well-meaning expert who can talk about the deleterious impact his conviction's reversal will have on women coming forward, along with including victims willing to rebut his spin with their personal accounts — Cosby wins all the same.

And Cosby's side of the story will be the part that gets quoted and repeated throughout the mediasphere. Soundbites will echo through and be discussed on radio talk shows and podcasts. His quotes will recur in an assortment of follow-up reports and think pieces.

That is what will serve to exonerate Cosby's legacy among the folks who already believed he had been railroaded — including and certainly not limited to his "Cosby Show" co-star Phylicia Rashad. Anything this man declares in a legitimizing TV news platform will be accepted by millions of people as the truth. That's already the case, but TV will amplify it, no matter how much any trustworthy and ethics-minded journalist tries to convey that a vacated sentence is not the same as absolution.

Such efforts will register on the broader public's consciousness with the same unremarkable impact as those muted trombone riffs representing the adult voices on every Charlie Brown cartoon. It's awful to think about. But it seems likeliest.

Again, I hope I'm wrong. I really do. I hope that those with the power to decide whose story gets a megaphone will put the survivors first, along with all rape survivors who haven't received justice and whose hearts sank as they processed this development.

I hope that entertainment divisions refrain from granting this tainted comedy legend the same pass they've afforded other celebrities convicted of terrible wrongdoing. Because every time that happens, women — Black women in particular — are reminded of the higher value society and their own communities assign to those men over their accusers.

But this is the season, nay, the era of corrupt public personas washing away the stains of their past in the river of media exposure. Look at Trump's cronies: Sean Spicer, the former president's feckless, ludicrously dishonest press secretary in 2017, has a political talk show on Newsmax . . . and people actually watch Newsmax.

Another former Trump press secretary, Kayleigh McEnany, returned to her natural habitat on Fox News, where she is a commentator. Jared Kushner and Ivanka Trump are trying to convince naïfs that they are "distancing themselves" from daddy. Former Attorney General Bill Barr is doing everything he can to downplay his powerful role in perpetuating Trump's election fraud lie.

If Cosby is able and willing to go down his fork of Image Rehab Road — and when you consider that his last stand-up performance was just three months before his 2018 conviction, he probably is — the decision as to how bright a spotlight he gets will be up to the people holding them.