Don't call it a comeback. People forgave the infamous boxer years before #MeToo, as this ABC News special shows us 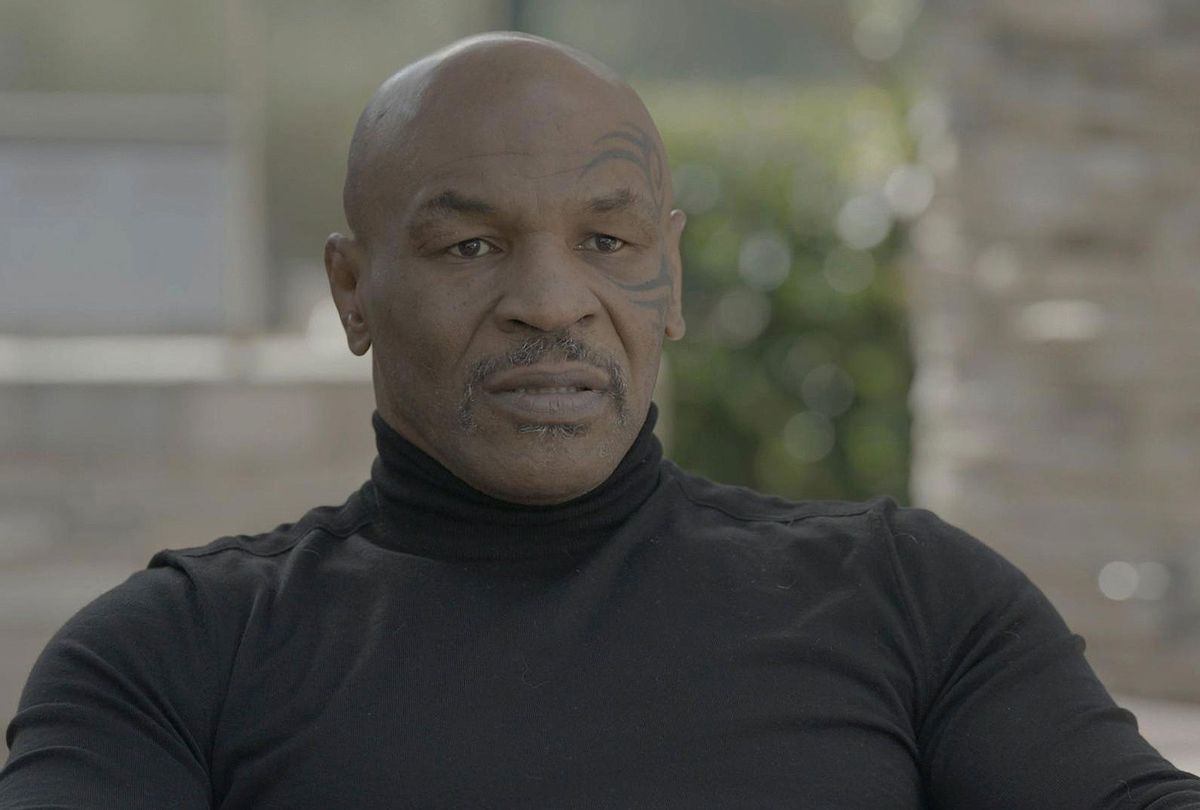 ABC News' two-part documentary "Mike Tyson: The Knockout" inadvertently answers the question of how men accused of misconduct against women can make a comeback without sufficiently interrogating whether they deserve one. In terms of Tyson, much of the world definitively answered that question more than a decade ago, celebrating his surprising cameo 2009's "The Hangover."

The public tacitly forgave Tyson long before that, an absolution earned by way of his return to boxing following his rape conviction. Americans love a comeback almost as much as they love a fall, and when he bit off a chunk of Evander Holyfield's ear during a 1997 rematch he became a national joke. Tyson's mental health and his boxing record deteriorated before our eyes, and soon as many people treated his pain like a sideshow as had cheered his return.

Tyson's life story is an odd one, and his image overhaul may be one of the most curious cases of our time – although for some, it is less curious than irritating. Which side you identify with depends on which chapter of the man's history comes to mind at the mention of his name. Do you view him as one of the greatest athletes of the 20th century and fearless tiger cuddler? Or do you associate Tyson with spousal abuse and the rape of an 18-year-old pageant contestant?

"The Knockout" favors the first view without eliding Tyson's crimes and misdemeanors which, in his case, would be impossible. Tyson's life story includes multiple stints in lockup as a youth before his 1992 conviction for the rape of Desiree Washington in Indianapolis, where she was competing as Miss Black Rhode Island in the Miss Black America pageant in July 1991.

But the violence he committed before his boxing career and during it is presented via the framing of reasons as opposed to excuses. Tyson's explosive rage was the product of his being raised in a crime-ridden neighborhood and abject poverty, says everyone from reporters to trainers to actress Rosie Perez (who is at various points identified as a "boxing aficionado" and as someone who originates from Bushwick, Brooklyn, among other descriptors).

"Whether it was his fault or not, he's been through enough," says Perez, Academy Award nominee, near the end of the special's second half. By that point even the man's most vociferous critics may find themselves swept up in the intoxicating apologia of it all. From the illustrated recreations of scenes from Tyson's heartbreaking childhood to the empathetic input from the people who covered him, knew him and admired him, its four hours roll out as an appreciation instead of an unblinking evaluation.

There's no denying that Tyson's life story is fascinating, and his significance to sports history is indisputable. Not only did he become the youngest heavyweight champion in history in 1986 at the age of 20, he also rocketed boxing back into mainstream popularity.

We witness this by way of footage from the 1988 bout when Tyson defeated Michael Spinks by knockout 91 seconds into the first round. It was one of the fastest K.O.s in heavyweight history, moving the announcer to crow, "And now the question is, who in this world has any chance against this man?"

Tyson's fans might say that man had it backwards, that what he, and we, should be asking is how someone like Tyson has any chance against this world. Being a Black man in America who rose from nothing and overcame much made and makes Mike Tyson a symbol of strength, indomitability, and Black pride.

But he was also one of the most famous celebrity defendants in a highly polarizing rape case, reported at a time when few victims ever came forward. As someone points out, Tyson's trial encompassed myriad questions about how the justice system treats Black men and the price Black women pay in the bargain.

"The Knockout" spends the opening 30 minutes of its second half walking us through the case, showing the ways that Washington was dragged through the mud as she testified before the Indianapolis jury.

A blood-boiling montage of footage reminds us that some of Tyson's most vocal supporters were women, along with male leaders of the church community of which Washington was a part. During his time behind bars Tyson received a parade of famous visitors and, according to subjects featured in the special, many women.

Tyson's boosters stood by him post-conviction, which is not shocker. They stayed with him after Tyson's first wife Robin Givens accused him of spousal abuse during an interview with Barbara Walters. Givens' reputation suffered more than his. When she married him, she was a sitcom regular, starring in "Head of the Class." Her career was ascending. These days, Tyson's film and TV career is doing better than hers.

Save for a few diplomatic observations by The Undefeated's Danyel Smith, who expresses some dismay over #MeToo's inability to hold men like Tyson to greater accountability, "The Knockout" treats these chapters as additional obstacles for him to defeat.

That said, former New York Times reporter E.R. Shipp's input provides useful counterbalance by placing the outrage directed toward Givens and Washington in the context of the times, along with providing a brief explainer about the country's history of convicting and executing Black men for crimes they didn't commit, or for any reason whatsoever. (The debut of "The Knockout" coincides with the one-year anniversary of George Floyd's murder; make what you will of that timing.)

But the eternal question that's never asked receives no airplay here, and that is: where are the second chances for the women Tyson hurt? Washington is determined to keep her life private; she declined to participate in the special, and beyond receiving a settlement to close a civil suit filed against Tyson she's been very successful at keeping her life private. She makes her living as a teacher.

Givens, meanwhile, has popped up here and there since her divorce from Tyson and her subsequent painting as a gold-digging homewrecker. Meanwhile, following his second fall from grace and several run-ins with the law, Tyson dove into therapy and embarked on an amends-making tour enabled in part by Oprah Winfrey and "The View." He's since starred in a Spike Lee-directed one-man show and a kooky Scooby Doo-style cartoon series on Adult Swim, "The Mike Tyson Mysteries," and made various TV cameos, including competing on "Lip Sync Battle."

These projects and "The Knockout" bring to mind my colleague Amanda Marcotte's bracing evaluation of cancel culture as we knew it in 2019. She rightly described it as "an incoherent and inadequate response to sexual abuse. People turn to it because real justice is elusive."

At that time people were embroiled in debates over whether it is possible to separate art from the artist specifically as it pertained to the music of Michael Jackson and R. Kelly. Each is the subject of damning documentaries featuring men and women accusing them of sexual abuse that came out that year. If there was some assurance that real justice was possible, Marcotte asked, could we be in a better position to continue enjoying their work?

Yes, she concludes, adding that if Kelly were to do real time for his alleged crimes, it will be a whole lot easier for people to listen to his music without guilt. "After all, Kelly's crime wasn't making memorable R&B hits. It was hurting women. If he pays for the latter, then maybe we can reassess how we feel about the former."

Tyson's career demonstrates this. The sports reporters, authors and experts who helped create his legend – most of them white and male – point out at regular intervals that had the former heavyweight champion of the world been released from prison in 2020 instead of 1995, after serving three years of a six-year sentence for rape, his life's trajectory may have been quite different.

They have a point. For all the wealth and fame Tyson earned as the heavyweight boxing champion of the world, he had no real power when he went to prison. Relative to the likes of Harvey Weinstein and Les Moonves, he still doesn't. Instead he has a sense of humility, as he demonstrates in an interview with Byron Pitts at the tail end of "The Knockout" that shows where he is today.

By that point we've heard from a therapist who worked with him, from professors and professionals who offer their view of how he's transformed himself for the better and, again, from Perez, who offers nothing but admiration and awe.

"Life has beaten me into submission so . . . I'm committed to going the other way," Tyson tells Pitts, and we can see that through a moment he shares with his son and secondary testimonials. Each person is invested spiritually, morally, and some of them financially, in his recovery and success. Together they make  "The Knockout" into quite an uplifting story of second and third chances, as long as you don't think too hard about the people Tyson hurt and wonder why they weren't afforded so much grace.

"Mike Tyson: The Knockout" premieres at 8 p.m. Tuesday, May 25 on ABC and concludes the following week starting at 8 p.m. on Tuesday, June 1. It will be available the next day to be streamed on demand and on Hulu.