"Borat" and Trump's "60 Minutes" interview show what we're missing: a sense of shame 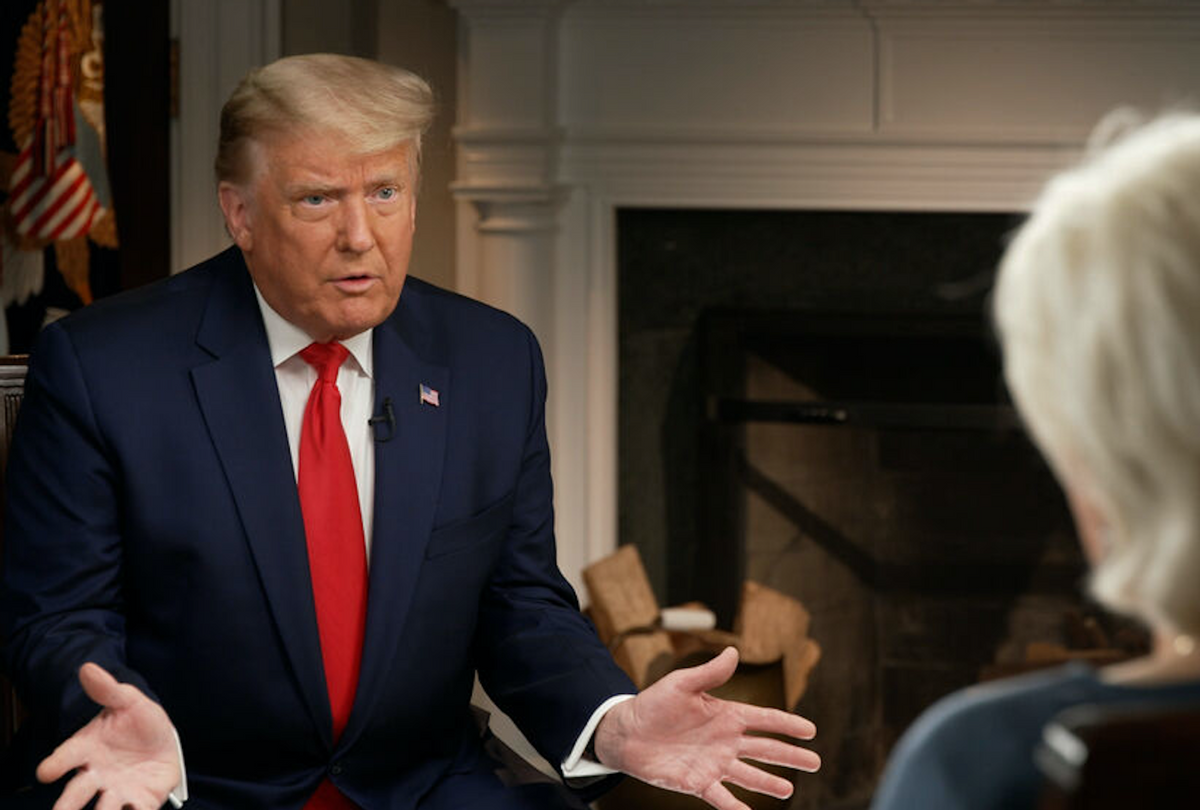 Lesley Stahl opens her "60 Minutes" interview with Donald Trump with what should be the simplest query for the leader of the free world.  "Are you ready for some tough questions?" Trump responds with his hope that she "just be fair."

Stahl tells him that she will, then poses her question again. "But you're okay with some tough questions?"

The extent of Stahl's fairness is up to the viewer's perspective, and in this partisan political climate around half the country is bound to land on the side of Trump, who last Thursday released the 38-minute unedited version of his interview with Stahl on his Facebook page inviting his followers to look at "the bias, hatred and rudeness on behalf of 60 Minutes and CBS."

However, to a person watching Sunday's telecast of CBS newsmagazine, Stahl asks the type of straightforward questions anybody running for president should expect, especially the incumbent. And it went pretty much as expected, with Trump babbling over her and refusing to deliver straightforward responses. A whole five minutes before the planned end of the interview, Trump walked out on the "60 Minutes" correspondent, which sounded like a bigger deal than it actually played out to be.

The network went ahead with its planned airing of the interview with Trump and his Vice President Mike Pence, followed by Norah O'Donnell's interview with his opponent former Vice President Joe Biden and his running mate California Senator Kamala Harris. "60 Minutes" edited Trump's portion down to around 20 minutes, and having seen both I can assure you that much of what CBS News cut out was his standard ranting about fake conspiracy theories while spewing an array of long-debunked falsehoods.

As if Stahl and "60 Minutes" anticipated that Trump would somehow accuse them of quoting the president out of context to make him look bad, a mission he achieves ably enough on his own, about midway through the segment Stahl pauses. "Can I say something?" she says. "You know, this is '60 Minutes.' And we can't put on things we can't verify."

Politicians lie, pivot away from questions they don't want to answer and prevaricate. It's in their breeding. However, one of the qualities I miss about contentious interviews such as this one before the era of Trump was the fact that the dogfight yielded substance and insight. Sunday's "60 Minutes" interview is what happens when a leader isn't used to being challenged and has therefore grown intellectually flabbier and even more shameless than he was to begin with.

Writers have often written about specific failures in governance brought on by Trump and abetted by his allies in the Senate as examples of the death of shame, and this exchange proves how necessary shame is for democracy to function and for leaders to approximate legitimate success. Without shame, crises go unsolved or worsen. Without shame, death tolls pile up even as leaders declare aloud that we're rounding a corner and say, despite actual statistics showing the opposite, that pandemic infection rates are under control.

Shame, or the lack of it, is where the publicity surrounding Stahl's "60 Minute" interview meets at the cultural crossroads with Sacha Baron Cohen's latest opus "Borat Subsequent Moviefilm." Baron Cohen has in the past proclaimed that he was done with Borat for the simple reason that too many people recognized him.

That the character doesn't appear in Baron Cohen's Showtime series "Who Is America?" is part of the reason so many Americans were willing dupes, but the other part of it is our collective absorption of and partial immunity to shamelessness. This is why a large portion of the public can watch Trump's lawyer Rudy Giuliani fondle himself in the presence of an actor posing as a reporter who he's just patted on her backside and entertain his suggestion that he was only tucking in his shirt.

Asked about the moment in another interview Trump said, "I don't know what happened. But years ago, you know, he tried to scam me and I was the only one who said no way." (He actually sat with Baron Cohen as Ali G for long enough to appear in an episode of his HBO series, which is a bit different from "no way.") Trump went on to refer to Baron Cohen as "a phony" and "not funny," to which Baron Cohen responded via tweet, "I admit, I don't find you funny either. But yet the whole world laughs at you. I'm always looking for people to play racist buffoons, and you'll need a job after Jan. 20. Let's talk!"

This is not to say that shamelessness didn't exist in 2006, when the first "Borat" film came out, or even in past administrations. If you ever want to see a tremendous portrayal of a shameless politician, go back to episodes of "Saturday Night Live" in the Bill Clinton era and take in Darrell Hammond's impersonation of the man. Even when old Willie was being especially slick, however, there came various points at which shame put him in check, whether by his own reckoning or one forced upon him by his conservative adversaries.

And I cannot imagine Clinton or George W. Bush or Barack Obama bristling at Stahl's stated intent of asking tough questions. Sure, they'd resent it – but leaders concerned with maintaining the public's trust as well as showing strength would never say so. Heck, even when better presidents resent their treatment by a newscaster, they handle it with some bit of aplomb.

Back in 1988 when CBS anchor Dan Rather questioned then-Vice President George H.W. Bush about his role in the Iran-Contra affair, those were actual tough questions. ''I'm asking for fair play,'' Bush said in his interview with Rather, clearly annoyed with a taped segment prior to his appearance that suggested he knew more than he had previously acknowledged. Bush's appearance took the network three weeks to negotiate, with producers warning his campaign aides that the back-and-forth would be "issue-oriented and tough."

Bush not only sat through that exchange but, in unforgettable fit of anger, got a few hits in on Rather from which his reputation never fully recovered.

And Stahl? She asked fair questions that wouldn't be construed as tough to a leader with a plan or a sense of ownership for his actions. A few even felt like she was setting him up for a layup knowing that Trump has a habit of pounding the backboard with the type of force better players would put behind a three-point shot. But that's his fault, not hers; she's simply passing him the ball here. What he does with it isn't up to her.

Stahl begins with the following: Why do you want to be president again? What do you think the biggest domestic priority is for you right now? Who is our biggest foreign adversary? These are not particularly tough questions.

She then moves on to addressing the rise in COVID-19 cases and unemployment claims; his statements about suburban women; and his inflammatory statements about Dr. Anthony Fauci and other health officials. She asks him to clarify his position on mask wearing; and the status on the health care plan he insists is coming to replace the Affordable Care Act. Questions about tough situations, sure. But again – not tough questions for a leader willing to take responsibility for his actions.

A softball asking Trump to characterize his supporters winds up to a fast pitch by asking if he feels any responsibility for possibly encouraging violence against his political opponents, citing the thwarted kidnapping attempt of Michigan Gov. Gretchen Whitmer.

Then she asks of Trump, "Do you take any responsibility for the country being divided against itself?  Do you feel that?" This is the point at which the questions became too tough and unfair.

Lesley Stahl: You know, I didn't want to have this kind of angry –

President Donald Trump: Of course you did.

Trump: Of course you did –

Trump: Well, then you brought up a lot of subjects that were inappropriately brought up –

Stahl: I never did a Joe Biden interview.

She still hasn't. O'Donnell did the honors here, and had to clarify a couple of things Biden said, including correcting him when he made a statement about Korea when what he meant was North Korea. But he didn't throw a tantrum at that or claim she wasn't being fair. Could it be that Biden has a sense of rectitude and therefore the welcome ability to be impacted by shame?

Who knows. Maybe, hopefully, we will find out in a few short months. But the dawn of a new presidency won't automatically spell a new era of accountability across the board. The fact that Baron Cohen was able to get away with what he did in Borat's 2006 escapades proves that this undercurrent in American politics and culture has always been there. Out of all the mitigating elements we should yearn to bring back on both side the aisle, however, real, pure and powerful shame is a motivator to actually do the right thing, take one's lumps and create solutions and answers for actual tough questions.

Maybe it's gone right now. Maybe we should bring it back. And maybe we shouldn't say farewell to the likes of Borat and figures like him just yet.