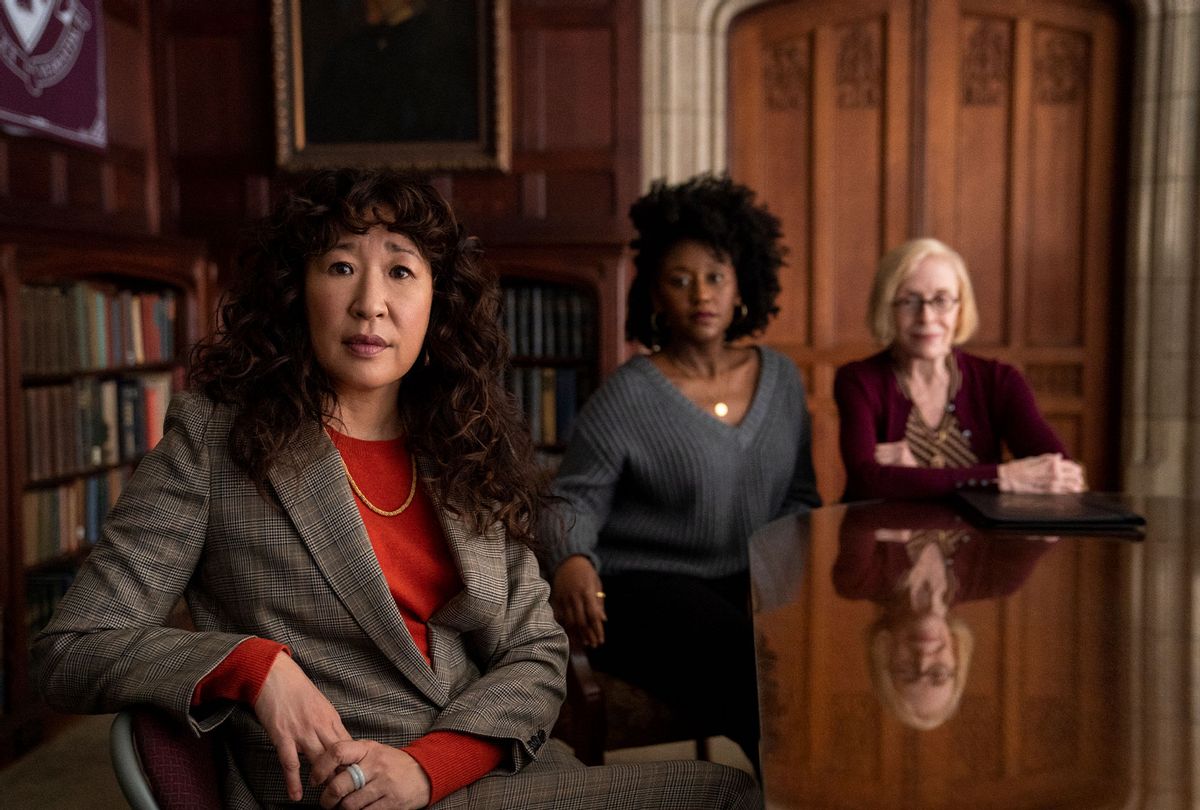 Why are university politics so intense? Because the stakes are so low.

Whether that classic observation is presented as a truism or a bitter joke depends on the delivery and circumstance. Either way, it might as well be the thesis statement guiding Netflix's "The Chair," Amanda Peet's six-part limited series starring Sandra Oh as Dr. Ji-Yoon Kim, an English professor under siege on multiple fronts.

At Pembroke University, she's honored with being named as the first woman to chair the English department, then immediately tasked with firing three colleagues who can't fill their classes. Her adopted daughter Ju Ju (Everly Carganilla) resents her for making her take a back seat to her job. Her father (Ji Yong Lee) is losing patience with being shoved into a caregiver role.

Nevertheless, Ji-Yoon has no choice but to keep plugging away as forces conspire to grind her down. As one of the few women of color on the university's teaching staff, she knows her boss Dean Paul Larson (David Morse) expects great things of her. At least he says he does.

But when Ji-Yoon attempts to use her newfound position to elevate a deserving and popular Black professor, Yasmin McKay (Nana Mensah), the Dean and Ji-Yoon's older white peers construct roadblocks that stymie both their aspirations. The other professors are envious of the younger women, each of whom connect with their students in ways the older teachers cannot.

Dean Larson, on the other hand, lazily throws around his weight as the college's patriarchal guardian of status quo as he makes a show of lamenting the liberal arts school's waning relevance in the technological age.

With "The Chair" Peet and her co-creator Annie Julia Wyman present an efficient study in gender politics in the workplace mixed into a dark satire about two of the right wing's favorite toys to play with: political correctness and cancel culture. It's also one that speaks most effectively to anyone who has endured academia or is close enough to a survivor to be familiar with the toxicity lurking in its depths.

All of those come into play when one of Pembroke's star professors, the recently widowed Bill Dobson (Jay Duplass), throws up a Nazi salute as a bit of theater during a lecture. Bill's not quite himself, as Ji-Yoon knows; they're very close friends. But when a student captures the moment on his phone, transforms it into a shocking meme, and shares it widely, angry protests tear up the normally staid campus.

That Bill's playacting is taken completely out of context and blown out of proportion doesn't matter. A head must roll. Possibly two.

Had "The Chair" solely focused on Bill's scandal and been handled with less consideration for the prismatic complexity of his and Ji-Yoon's situation, one could picture many ways that the story could have degenerated into a simplistic plot skewering the over-policing of propriety.

But the writers and Peet, who has a writing credit on three of its six episodes, achieve a striking and complex emulsion of humanity, ego and ultimately decency – or in some cases, the lack of it.  Through this thorny narrative they make the case that even if the students might be enraged over a manufactured slight, their anger isn't emerging from the ether.

They're coming of age with an increased understanding of how the white patriarchal point of view has shaped the base of knowledge with which they enter the world. They also notice how many of their teachers happen to be white, male and from a generation that not only doesn't understand them but doesn't deign to try.

On the other side are those teachers, each of them afraid of being stamped as irrelevant but too proud to change with the times.

Ji-Yoon knows all of this, and yet as she's saddled with an array of pressures, she's made to serve her senior white subordinates instead of managing them. Instead of firing Bob Balaban's prickly Professor Elliot Rentz, one of those stuffy classics who can't get butts into seats, she tries to save him by inserting him into one of Yaz's most popular classes, assuming he'll be as bowled over by the up-and-coming professor as she is. This, of course, is an instance of willfully forgetting how intellectual narcissism works.

If the concepts delineated in "The Chair" don't hang together entirely seamlessly, that may be owing to the varied constituencies chipping way at Ji-Yoon's reputation, either overtly or behind the scenes. Perhaps it's best absorbed as a series of plays running simultaneously in different parts of Pembroke's campus, or in the spare wintry streets of the college town series director Daniel Gray Longino films in a way that conveys the place's noble chill.

Each has its moments, and some are wonderful, particularly the views into Ji-Yoon's personal life and her interactions with her Korean family members, each of whom is loving, concerned and hilariously judgmental. And Carganilla is legitimately charming as Ju Ju, finding a balance between deviousness and an indignation at both her mother's absenteeism and her own internal identity struggle born of being a child of Mexican heritage being raised by a Korean mother.

Oh's controlled vacillation between effervescent wit and warmth and frantic frustration in each episode make Ji-Yoon a solid navigator through this morass. She channels the comedic dexterity we've seen in "Killing Eve" and "Grey's Anatomy" before that into demonstrations of pure discomfort in moments when Ji-Yoon is aware she's being used as a pawn but can't figure out what to do about it. But she pours a heated sorrow and frustration into Ji-Yoon that makes her the center of gravity in an impressive ensemble that also includes Holland Taylor and Balaban.

Duplass has made a career of playing good, well-meaning but frustrating men like Bill or writing them, so his naturalistic performance is enjoyable if not entirely new. Some of the scenes he shares with Oh are among the most vividly touching in the series, which is saying a lot in a story where Taylor absolutely devours each frame. Witnessing her deliver a beatdown to a kid who disrespects Chaucer is truly a moment to savor.

Together these performances carry a story over its bumpier spots until it arrives at its larger point, which is that the outcries from each end of the supposed cancel culture spectrum are addressing real concerns.

None of those problems can possibly be solved with a few placating sacrifices that are essentially meaningless, except to the people whose lives are destroyed in the process. Peet, Oh, Duplass and the rest take these relatively insular stakes and make them expansive enough to allow anyone to savor the way it connects the campus' furor and the broader canvas of politics and culture. And while Pembroke may not fully appreciate what Ji-Yoon brings to this conversation, the knowing viewer surely will.

"The Chair" is now streaming on Netflix.