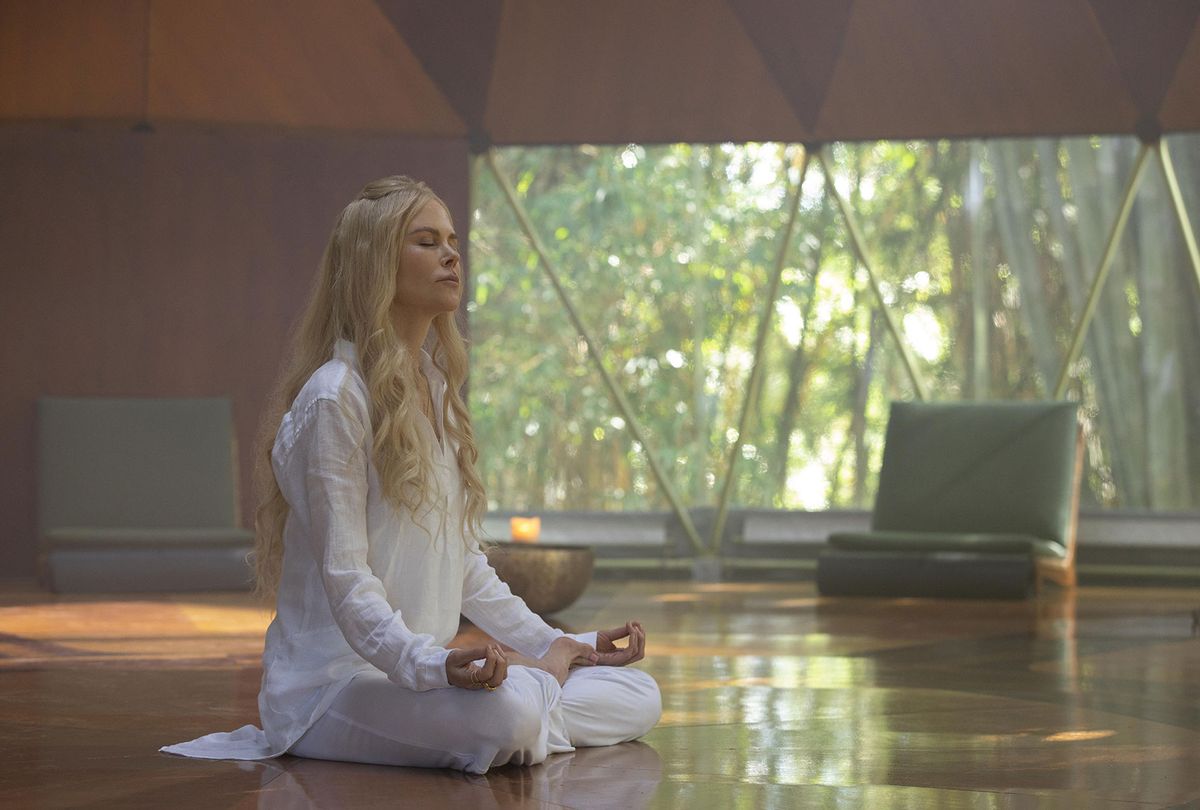 Television revolving around vacations and retreats is having a moment right now, between the class-exposé satire of HBO Max's "The White Lotus," and now, Hulu's "Nine Perfect Strangers," based on the Liane Moriarty novel of the same name. The latest Nicole Kidman mystery follows, well, nine perfect strangers, each with their own demons, arriving at a beautiful but eerie wellness resort, which may or may not be a cult run by Kidman's enigmatic Masha Dmitrichenko.

The resort, unironically called Tranquillum, is the image of inner peace, a wellness influencer's dream location to film and share yoga meditations on Instagram Live. It's not just the waterfalls, rivers, hot springs, superfood smoothies and yurts that convey this imagery. It's also the orientalism: the bamboo shoots, the dragon fruit slices, the frequent rounds of East and South Asian inspired meditations and acupuncture.

Then of course there's Manny Jacinto as Yao, one of Masha's dutiful underlings, who greets guests upon arrival with a soulful "Namaste" and fits neatly into the role of the Spiritual Asian. Tranquillum staff — or cult — members are also notably clad in what appear to be the simple, unassuming tunics of Buddhist monks, or at least some version of what white people think Buddhist monks dress like.

"Nine Perfect Strangers" comes across as a decently self-aware show, literally featuring an Instagram lifestyle influencer whose obsession with social media seems to be fracturing her marriage. Its invocation of the west's predominantly white wellness industry and the industry's penchant for orientalism seem like smart satire, a critique of the tactics and deceits of the typical white, wellness industry charlatan.

As audiences struggle to decipher what Masha's game is, and what twists and traps Tranquillum inevitably has in store for its nine, carefully curated guests, there's no wonder the characters seem to fully buy Tranquillum as an ordinary wellness resort — it certainly presents that way.

The wellness industrial complex and its "superfoods," yoga, meditation and spirituality comprise a vast, trillion-dollar, cutthroat capitalist enterprise, that charms customers and followers with Asian-coded language and imagery, and Asian-influenced wellness practices and foods. Despite this, it's often mystical white women like Masha who are cashing in on the west's fetishization of eastern culture and spirituality.

Ironically, eastern medicine and health practices have long been mocked and dismissed as "voodoo," mystical nonsense — that is, until the right white influencers peddle it and are subsequently called geniuses and awarded with exorbitant wealth. With their wealth, fame and significant social platforms, white wellness influencers may take on everything, like selling all kinds of often Asian-influenced wellness foods and products, opening their own yoga studios, and even pushing QAnon conspiracy theories.

And from pitaya to matcha, ingredients that often feature in the busy kitchen of Tranquillum, the wellness industry has an obsession with eastern, often Asian "superfoods," which is how western health influencers often refer to high-nutrient, "exotic"-looking, nonwestern foods. "Superfoods" sounds supernatural, foreign — and the label also conveniently erases these foods' true cultural identities, spinning them as magical treasures discovered by adventurous white people, rather than an everyday part of the diets of people around the world.

Take for example the recent saga detailed in Grubstreet of the self-styled "Congee Queen," a white woman named Karen Taylor who stumbled upon the wonders of congee and decided to sell pre-packaged kits of the dish to western palates. In an essay originally titled "How I discovered the miracle of congee and improved it," she used orientalist language to dismiss the dish that has historical and cultural significance in Asia as nothing until she put her spin on it.

"Nine Perfect Strangers" may not feature Lululemon-clad, white women yoga instructors, or Buddhist paraphernalia and koi pond-side tai-chi, but the pursuit of some sort of intense, transcendent spiritualism that's brought all of the guests together feels strikingly orientalist. The patrons of Tranquillum were all selected by Masha because of their unique inner demons, including the Marconi family's struggles with grief and trauma over the loss of their son years ago, Tony Hogburn's (Bobby Cannavale) struggles with addiction and separation from his family, Frances' (Melissa McCarthy) struggles with a waning career and loneliness, Ben and Jessica's (Melvin Gregg and Samara Weaving) marital issues, and Carmel's (Regina Hall) struggles with self-image and anger.

The guests turn to Tranquillum because they seem to believe, on some level, that they need some otherworldly force to overcome their life problems. Little else seems more "otherworldly" to white people and westerners than the customs, traditions and imagery of the east, but comfortably and conveniently packaged into a wellness resort helmed by an adequately ethereal white woman.

Jacinto's quiet but steady presence as Yao is also notable, as the only Asian character on a show that features a predominantly white cast, despite the race-bending of several characters from Moriarty's original novel. Yao, like Delilah (Tiffany Boone) and their co-workers, is a personal wellness guide to the guests, but his serene presence, sage wisdom, and leadership at the resort feel deliberate. Like the original version of Jacinto's performance as Jason on beloved comedy "The Good Place," Yao is the image of the self-actualized Buddhist monk who's achieved nirvana and is capable of speaking in the Instagram caption-worthy wellness platitudes that white consumers seem to find so very comforting. (Moriarty also pokes fun at Tranquillum's reliance on the appearance of orientalist wellness practices. In the book, it's Yao who must learn tai chi from Masha first before he becomes an instructor at the retreat.)

"Nine Perfect Strangers" may not as overtly comment on race, class, privilege and settler colonialism as "The White Lotus" did. But the Hulu limited series' subtle shades of the wellness industry's orientalism closely mirror the ongoing oppressions of colonialism in the show's own way.

After all, the white-led wellness industry of the west is a modern extension of colonial capitalism in itself. "Nine Perfect Strangers" seems to subtly allude to how white people claim eastern cultures as their own, and commercialize and then profit from these cultures, while the true pioneers of these wellness practices receive nothing — except, perhaps, a job as a "personal wellness guide" at Tranquillum, doing the dirty work for white women like Masha.

"Nine Perfect Strangers" is streaming on Hulu, with new episodes released on Wednesdays.