Welcome to this year's Nicole Kidman viewing escape. May its middling delights provide us self-care we badly need 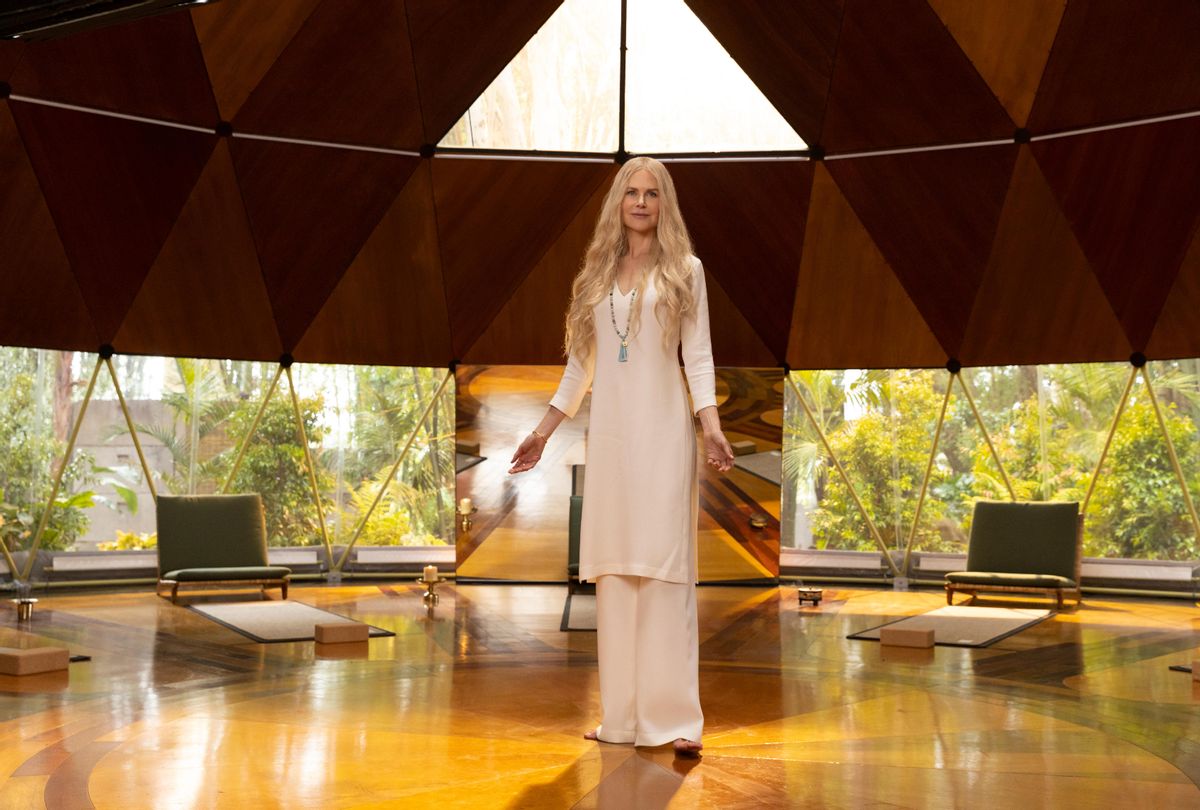 The last time we saw Nicole Kidman was in HBO's "The Undoing," a stylish waltz through wealthy Manhattan society by way of a murder mystery.

Anxiety defined our national mood back in the autumn of 2020, making the limited series a brilliant antidote to the ennui that gripped us back then. Nearly a year later we're slogging through some version of burnout, making us especially vulnerable to seductive promises of rebirth and renewal.

Masha is the physical manifestation of Tranquillum House, an exclusive retreat catering to customers – or are they subjects? – in a serene destination dedicated to the healing of broken souls.

As one visitor observes in an early episode, the group Masha invites to her resort are intentionally curated; that is, joining wealthy clients paying full freight to be there are everyday folks who probably saved up for years to savor 10 days of what the place offers.

That includes Masha herself, a Goop-tastic creation whose studied smile, meant to convey a sense of reassurance, is locked in an eternal battle with a non-specific accent prickling with dubiousness.  A cascade of blonde frames her face, flowing seamlessly into the airy tunics she wears, each a slightly grander version of those swathing her staff.

Masha keeps the audience and her guests in the dark as to whether she's a force for good, or a charlatan, or something infinitely more dangerous. She's a reminder that many self-styled alternative health revolutionaries are not entirely dissimilar to cult leaders.

But this is of less importance to its appeal than the fact that the show reteams Kidman with "The Undoing" creator David E. Kelley for another story based on a bestseller from "Big Little Lies" author Liane Moriarty.

The overwhelming success of "Big Little Lies" proves how potently their collaborative approach combines with this material. Even without Moriarty's twisty reads to guide them, Kidman and Kelley manage to seize the audience's fascination with their work.

But the overall quality of the projects themselves matters less than the cast's ability to act loudly and with extravagance. Some performances garnered award nominations and, in Kidman's case, wins. That doesn't mean the series showcasing them are great. They merely need to be good enough to get people hooked on their dramatic excess.

All of this is to say that comparing this show to "The White Lotus," HBO's recently completed conversation piece of the summer, is setting it up to lose. Mike White meticulously designed his drama to be an unsparing view of class privilege and the corrosion colonialism inflicts on populations many generations after its initial imposition.

"Nine Perfect Strangers" also uses its spa as a canvas upon which to splatter critiques about Western immoderacy by looking at what wealthy people will do to address their feelings of spiritual deficiency. But it can't quite decide whether it's a parody of the wellness industry or a thriller, a comedy or a drama.

One certainty is that Kidman and Kelley's latest effort strives for broader appeal, largely removing overt examinations of racial strife from the equation in favor of class contrast. Even on that front the show refuses to take itself too seriously, adopting the toothless paradigm that we're alike in our flaws and that our various tragedies that make us who we are. But nobody's woe weighs the same as another's. One party's is an outgrowth from a loved one's suicide. Another involves the sudden acquisition of wealth by way of a lottery win.

Everyone is hiding darkness, otherwise they wouldn't surrender themselves to the care and control of Masha and her acolytes Yao (Manny Jacinto) and Delilah (Tiffany Boone). Upon arrival everyone surrenders their smartphones and any way of interacting with the outside world, signs a troubling waiver and blindly agree to whatever Masha requires of them.

At first this seems reasonable, since Tranquillum's purpose to unplug in a space surrounded by forests. Upon arrival each guest is served a special, individualized smoothie they're required to drink each day. They're shown to their heavenly rooms. Soon after the restorative journey starts getting strange. For example, we see that Masha monitors every patron's movements through her network of close-circuit cameras. Then she begins manipulating their moods in violative ways.

Patrons go along with each escalation because they're desperate to achieve "wellness," whatever that is. To Masha and her devoted staff, the pathway to enlightenment must be embarked upon together. Sometimes it runs through others.

This is the way that "Nine Perfect Strangers" manages to be watchable, not as a complete, holistic piece but as a pastiche of solid performances placed in woodsy settings, or in pools and streams. Melissa McCarthy's wound-up Frances Welty, a bestselling romance novelist whose faith her herself is flagging along with her career, is a standout primed for confrontation.

The performer's tart sarcasm takes on a wounded softness in Frances that matches the damaged cynicism Bobby Cannavale brings to Tony Hogburn, a scruffy misanthrope who shows up in sweats, refusing to believe he can be helped. Frances and Tony immediately clash. But a lot can change over the course of 10 days.

For Regina Hall's meek, weight-obsessed Carmel Schneider, the spa represents a once-in-a-lifetime opportunity to fix her perceived brokenness. The actor substantially dials down the feisty blast she brings to "Black Monday," so much that it takes a moment to recognize her, until some of the demons Carmel has internalized break free. Luke Evans' Lars Lee, in contrast, is an enigma.

Watching Kidman mess around with a personality hiding fangs is a welcome departure from wronged rich spouses she's played in other Kelley-related works. Masha might be a charlatan, a cult leader or, as one character asks of her staffer, "the real deal." The further she pushes boundaries with her clients, the steeper the potential for calamity escalates.

Parallel to her performance are Jacinto's and Boone's portrayals of loyalists who also fit into the wellness industry image of earthiness and purity, two people of color quietly walking beside clients on their journeys dispensing wisdom and holding hands with them when they get emotional. "The White Lotus" places this brand of service industry theater front and center and rips into it. If that show hadn't existed I wonder if we'd even be looking for it here.

But I'm not sure that part matters in terms of estimating the show's worth. Against all else, a looming threat to Masha's life that's woven throughout the plot it registers as background noise, proof the plot's motor is operational.

Surely the inelegantly presented homicidal menace will take on more prominence in a way that Yao's and Delilah's cultural window dressing probably won't. No matter. Those jonesing for their annual Kidman fix are less likely to care about this or any other structural weak points than the temporary uplift each new episode brings, in the same way people have embraced all of Kidman's less-than-consequential jaunts with Kelley. Like those other works, "Nine Perfect Strangers" may not be five-star TV, but for an audience starved for indulgence, it does the job.

And if it doesn't cure what ails us, we'll simply have to wait for FX's freshly announced limited series "Retreat" to come around.