Amy Irving on her new film "Confetti," stage fright and the big role she almost turned down

The actor spoke to Salon about her latest film, singing, reading, dyslexia and her career 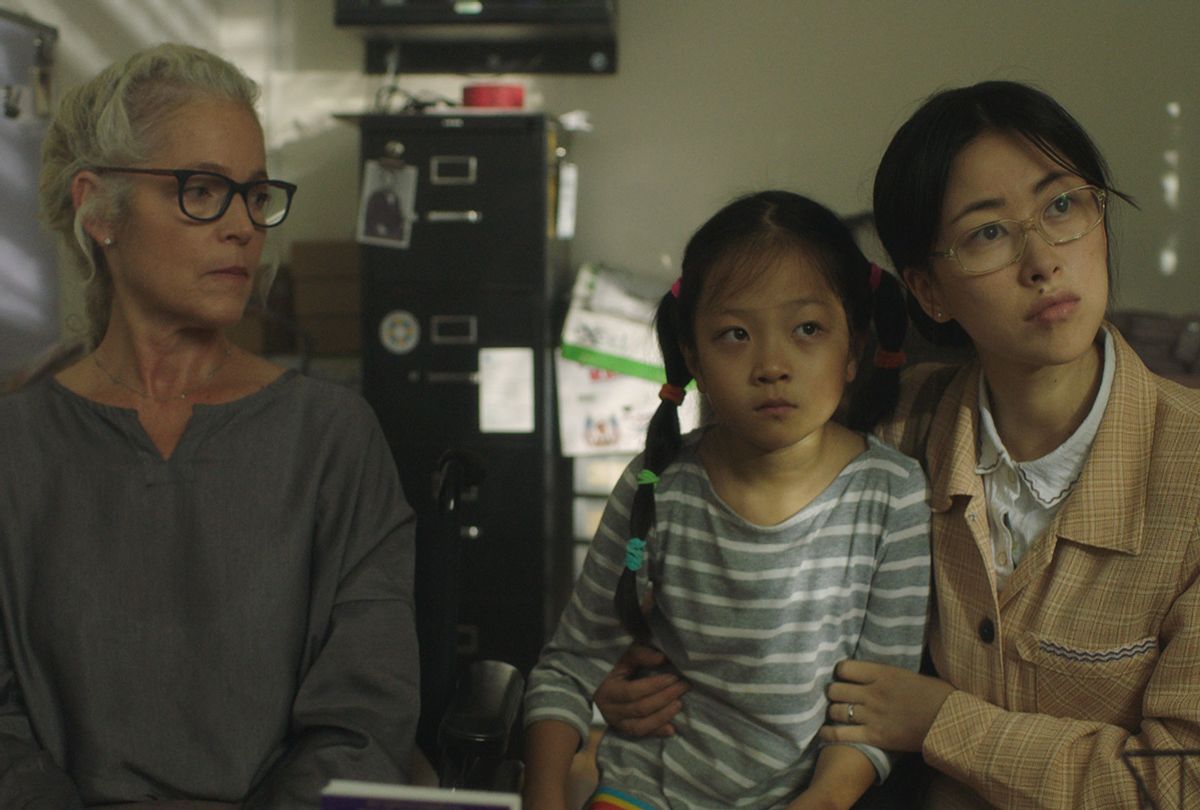 In the modest, uplifting drama "Confetti," Amy Irving provides compassion and support as Helen, a writer in New York City who helps Chinese immigrant Lan (Zhu Zhu) and her gifted but dyslexic daughter Meimei (Harmonie He) find a proper education. Helen is initially reluctant about this arrangement, but she soon comes to appreciate the sacrifices Lan is making for her daughter.

Irving is radiant on screen, playing an elegant woman who has suffered a terrible loss herself. Helen is confined to a wheelchair. She reflects on her own setbacks as she assists Lan and Meimei with their struggles, caring for them in as much as they care for her.

As she does in her best performances — think Izzy Grossman, in "Crossing Delancey" — Irving projects an intelligence that engenders trust. The actress can express all her emotions in just a simple sigh or piercing glance (as when Meimei slurps at the table in "Confetti.") The film develops themes of shame and trust, but also selflessness. Helen becomes as a fierce an advocate for Lan and Meimei as they combat dyslexia.

The actress spoke with Salon about "Confetti," singing, reading, dyslexia, and stage fright.

"Everyone has a story," Helen says in a recording she makes advocating for Lan and Meimei. So, can I ask, what is Helen's story?

She was in a terrible car accident with her son; that's why she's in a wheelchair. She kind of shuts down and has a very limited life because of that. Her world fell apart. She lives in darkness and negativity and what happens through having this family from China enter her world, helps her get out of her writing world, and back into life. The writing was therapeutic for her, and it was a good excuse for her not get back into the world.

"Confetti" has you playing a writer, which makes me think of your role in "Crossing Delancey," which also had a literary bent. I am very curious about what books you read.

I'm reading this amazing book that James Lapine wrote, "Putting It Together." It's so wonderful. I have to say, "Sunday in the Park with George" is the most brilliant musical ever written. It's my husband's and my favorite. We even have a gigantic poster of it that James gave us in our house. We are such big fans. I almost didn't get on this phone call because I was just turning pages reading this book. It's so delicious. Very delicious. That's what I'm reading at the moment. I am more of a novel reader. I finished all of the Patrick Melrose novels. I read sometime in French. Or try to. I've been taking French lessons. I don't understand it when people speak to me, though. Something shuts off.

I heard if you can play music, you can speak a foreign language.

I am very musical. I've been doing more music than acting lately because my son Gabriel has been managing a group called Goolis, and they asked if I'd sing some songs with them, and we ended up doing an album together. Ten songs from my life that he did new arrangements on. I sang with the band. It was a very cool experience — it was a little terrifying, but also just wonderful. Just before COVID hit, we played a few bars downtown, and we were getting ready to launch, but then had to shut down. We set up a studio in the house and my husband and I play every day and I sing every day. I sang in "Honeysuckle Rose" with Willie Nelson. I am trying to get past my incredible stage fright, which I've always had, but to sing is even more frightening. I am trying to [perform] so when it's time to launch this album, I'll be able to get up and actually do a show.

Karaoke scared me too!

"Confetti" is also about disability. Helen is in a wheelchair; Meimei struggles with dyslexia. What are your thoughts on how the film presents its issues of disability?

Ann Hu wrote and directed this based on her own story. I don't think she wants to make a Public Service Announcement. She wanted to make an entertaining film, and I think she accomplished that. It's an important subject to be illuminated and she was the person to do it. My husband has dyslexia. I am very aware of how it affects your life. What is interesting for him was that he didn't know he had it; he never got diagnosed. He was just challenged in ways like reading that he learned to muscle through and got to the other side of it. It was only 10 years ago he was diagnosed. And he thought, "Now I get why I've had to work that much harder, and why I go left when I should go right." It helps to recognize it and not take it on as a deep insecurity and shame as many people do.

"Confetti" addresses issues of shame. I was particularly struck by a revealing scene where Lan talks about feeling like an imposter. Helen projects a certain confidence, and steeliness, which is invigorating,

I think Lan had plenty of steeliness! I love the device of glasses — the fact that she looked like she could read and wasn't illiterate. It is so important that we accept all of our flaws and accept ourselves. Meimei turned her dyslexia into something beautiful in what she was able to create.

Why do you think Helen advocates for Lan and Meimei? The film wisely lets the audience connect the dots. What are your thoughts on her life and backstory?

Ann and I decided you don't get to know everything. [Helen] has retreated from life before Lan and Meimei turn up in her life. Her taking them on helps bring her out of her darkness.

Did you ever see "Shadow Magic"? The reason I did this film was because of "Shadow Magic," a period piece about bringing film to China, starring Jared Harris. The way Ann was able to depict what film is, and Jared's character is trying to explain it in China, was so beautiful. She did something extraordinary in that film. If anyone is going to able to help understand what dyslexia is, and go into the mind and the visuals, she would be able to do it.

I don't think of a mother helping her kid as a sacrifice. It's just part of the job. Isn't it? I worked a lot less because I was raising kids and wanted to be a mother more than anything else. But I don't think of that as a sacrifice. I had children, and made that choice, so that's what I'm going to do. Lan has a purpose. I think it enriches your life more. The challenges she took on and the fight she took on, and the people she met because of it. The world gets richer. She's out there doing it. I like your word "champion" better than sacrifice. She never sways from her goal. I love the way Zhu Zhu played Lan. She is a very thoughtful actor. I loved watching her process, and what she took in, and how she thought things through. I have no idea what the director was saying to her. It was always in Chinese. I was totally left out whenever they were talking.

Your career has been defined by some iconic roles, from Sue Snell in "Carrie," Hadass in "Yentl," to the aforementioned "Crossing Delancey," and even "Bossa Nova." I always want to see more of you because you so often project sophistication, intelligence, and no-nonsense in your roles. What decisions have you made and the roles you've taken?

You never know going into something how it is going to hit, or how it's going to be. I take it one day at a time. Something comes across your desk and you think, "I never thought I wanted to play that." But I've never done it, so that's much more fun. When I was offered "Yentl," I turned it down. I thought: another sweet young thing, I was doing "Amadeus" on Broadway, and I loved being back on the stage. Then Barbra wooed me, and I am very glad she did. It would have been really stupid to turn that role down, and it turned out to be a much more interesting role than I thought it was. I did have an amazing experience on that film.

Martha Clarke asked me to do a production of "Chéri" in New York on the stage, and it was a piece with two world-class dancers, one world-class pianist, and one actor. It was the story of Chéri done through dance, and the actor was telling the story in character while Alessandra Ferri — one of the most beautiful dancers on earth — and Herman Cornejo, the lead actor of the American Ballet Theatre, were doing this amazing work. I just got to stand on the side of the stage and watch this beauty happening. That's why I wanted to do that. It wasn't about needing to be seen, or to do this role. I wanted to be a part of this world. It was a new world for me, the dance world.

The same things when I went and did "A Little Night Music." Isaac Mizrahi directed me and Ron Raines at the St. Louis Opera House. I was singing with opera singers and there was a 60-piece orchestra, the St. Louis symphony orchestra. It was mind-blowing, the experience. It wasn't what I thought I'd be doing when Isaac offered it to me. Again, I have terrible stage fright, so it was the most terrifying thing I've ever done. I had to see a behavioral therapist who had to put me in trance and say, "And now the orchestra is tuning up . . ." My heart starts to beat, and he tries to help me calm my heart. To act with opera singers — you don't go out saying, "Oh, this is what I want to do next." It was whatever came up for me. That it sounded like I was going to learn something or have a new experience.

Yes, I always want to see more of you.

I just did a film called "A Mouthful of Air." Amy Koppelman wrote the book. She had done a film of one of her books called "I Smile Back" with Sarah Silverman. And she decided she wanted to direct this one herself. It is her first time directing. I had the opportunity to help someone like her, a novelist, bring her work to life. It wasn't a role I needed to play. Amanda Seyfried stars in it. I loved Amy's energy, and who she was, and we became friends. The experience on the set — it was fun being there for her and holding her hand through it. She did a wonderful job but had to cut a bunch of me out. [Laughs] But I loved doing it. That's the kind of thing that makes me happy. Being in a good playground.