From Britney to Lorde: Young women shift from embracing body positivity to body neutrality as teens

Many people, and especially women, simply don’t want to be perceived by others these days 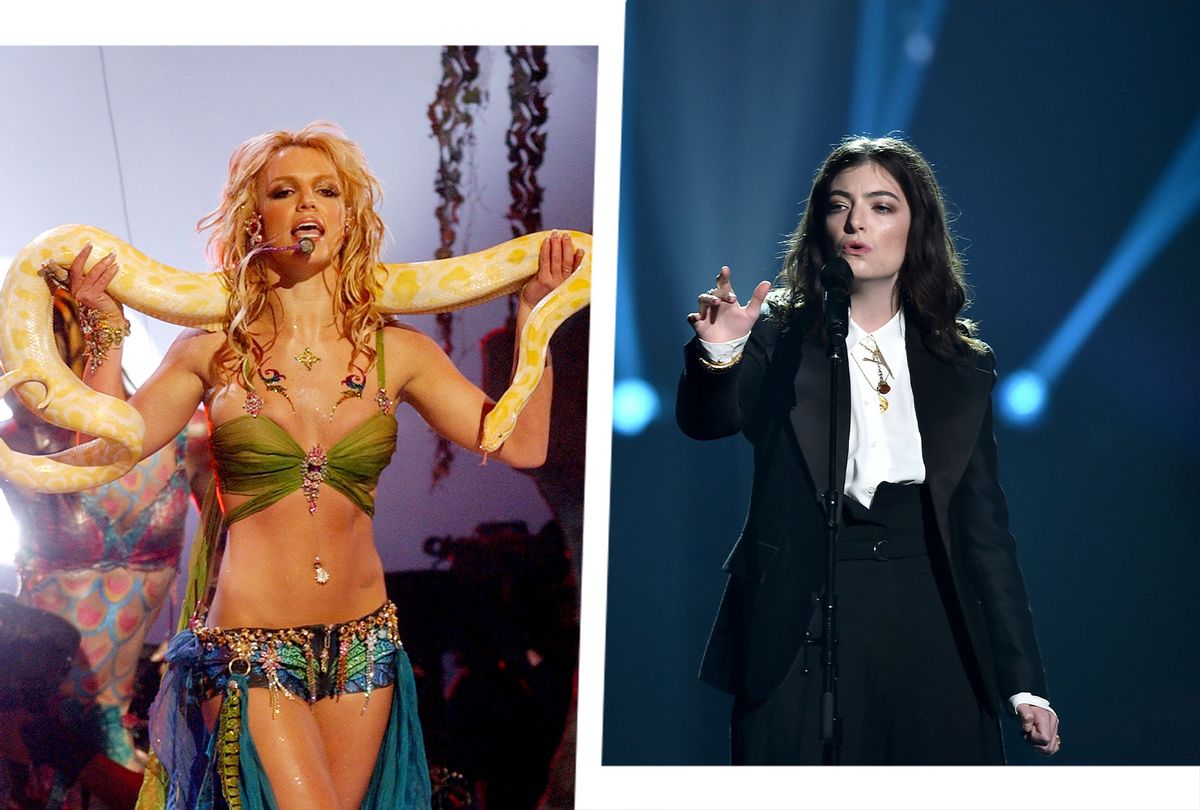 At just 16 years old, Lorde skyrocketed into stardom with her 2013 single "Royals," and has since cemented her place as one of the most decorated and beloved popstars of the era. With the long-awaited release of her third studio album "Solar Power" last week, Lorde is opening up about her journey as an artist and a young woman after nearly four years of existing under the radar. After all, not only did Lorde's legions of loyal fans have to wait four years for the album, but they've also had to endure near radio silence from the reclusive star, who partakes in almost no social media unless you count the New York Times cooking app.

In a recent interview with the Irish Times, Lorde specifically opened up about body image and being one of the most visible and watched stars in the world as a teenager, which she rightfully called "a tender time." Lorde had deliberately tried to "not [invite]" conversations about her body, and had drawn boundaries in terms of outfits and behaviors she wasn't comfortable with.

"I sort of kicked that out the conversation," she said. "I was pretty intent about that. I didn't want people to be talking about what my body looked like. I was a kid. And I really wasn't 'in' my body. As a teenager, you kind of wear your body like an outfit that doesn't fit yet."

This revelation might have come as a shock to fans who have been celebrating the bold and (literally) cheeky album art of "Solar Power" since it was first revealed in June: a sunlit shot upward from the ground that captures her almost bare rear as she runs on the beach. Of course, Lorde is 24 years old now, and the cover of "Solar Power" evokes her adult comfort and confidence in her body. But as she expressed to the Times, album art like this understandably wouldn't have been comfortable for her before when she was a teenager. This is only natural — our comfort and approaches to bodily self-expression will shift and change over time.

Billie Eilish, another pop phenom who just recently turned 19, has expressed similar sentiment, wearing only baggy, non-form-fitting clothes for the early years of her career. Like Lorde, she also rose to fame as a young teen, and is already a Gen-Z music icon. Eilish chose her unique fashion choices because she didn't want her body to be perceived and commented on by voyeuristic media and its obsession with hypersexualizing women and girls, no matter their age.

And speaking of shifting and changing with time, like Lorde with the cover art of "Solar Power," Eilish's approach to self-expression seems to have changed, too, as she poses in lingerie and revealing, luxurious outfits on the June cover of Vogue UK this year.

Both of these women took control of their appearances while younger, giving them both the confidence and healthy fortitude to continue to decide how they want to present themselves now, regardless of who's looking.

Lorde and Eilish's early approaches, and their decisions to center their comfort in how they dress, comprise a rebellious response to hypersexualization of teens and especially teen popstars. They also seem to endorse the concept of body neutrality and its de-emphasis on publicly celebrating bodies and appearances. Body neutrality, a term coined by Anne Poirier in 2015, differs from body positivity by recognizing it can be unrealistic to expect everyone to be able to "love" their body or appearance in a society that's long told essentially all non-skinny white women to hate themselves.

Instead, body neutrality focuses on appreciating your body for what it's able to do in a world that makes so many demands of us. And it also respects that some people just don't want their bodies to be perceived or commented on at all — including compliments.

Body positivity is a well-meaning and powerful movement that's uplifted and empowered many people of all body types, but it might not be for everyone. Some who wrestle with insecurities about their bodies can feel pressured or frustrated with themselves for not being able to adequately "love" their bodies — for them, body neutrality and just peacefully existing in their bodies without public attention might be the more comfortable approach.

Neither Lorde's nor Eilish's explanations of their unique fashion choices were solely about avoiding criticisms and attacks on their appearances, but avoiding this sort of attention or any commentary at all, positive or negative, really. Even positive and well-meaning comments about someone's body can be harmful, triggering, or just uncomfortable for someone for any number of reasons in a society with so many exhausting, unattainable beauty standards. These compulsory beauty standards make each of us feel so many complicated feelings about our bodies from adolescence onward — feelings that can be triggered by a single word from someone else.

Being praised for being thin or curvy or any other aspect of your appearance can be difficult to hear for people who struggle with eating disorders, chronic illness, or any other personal factors for why their body looks the way it looks, which is why body positivity movements can be uncomfortable for people who don't want any attention on their bodies. Even being praised for being thin can make someone feel anxiety about losing this body type, or convince them their value and attractiveness are tied to their thinness.

Many people, and especially women, simply don't want to be perceived. On social media, many women have expressed feeling more comfortable wearing masks in public because it removes the stress and pressure of having your appearance appraised by strangers or attracting unwanted attention. Mask-wearing hasn't unilaterally stopped gross street harassment and cat-calling, but it's at least given most women and girls at least some level of privacy and distance from the public gaze and its tireless scrutiny and consumption of the female form.

A departure from the exploitation of 2000s pop princesses

It's a relief to hear from Lorde and Eilish, two female pop icons of the 2010s and 2020s, on the decision-making power they've had in creating their public images, and what outfits and performances they felt comfortable with, even as those have changed over time. It would be naive to suggest industry and societal sexism have been cured, simply because famous young women are now allowed to wear formless clothing if they so choose, but it's certainly progress from the experiences of young female pop icons like Britney Spears or even Miley Cyrus.

In Lorde's interview with the Irish Times, she opened up about how she feels looking back at the early years of her career.

"There were just things I wasn't going to do if they weren't comfortable for me to do. I wore the exact outfits I felt like wearing. I wore suits. I loved suits. I felt powerful in them," she said. "The fact that I sort of did it in a way that felt right for me – that meant I don't look back and feel f*cked up by it."

In contrast, media hypersexualization of Spears and obsession with her body, appearance and sexuality while she was still a minor pushed her to the brink, and are certainly could be seen as part of the reason she's trapped in a conservatorship she's called abusive to this day. Also as a minor, Cyrus was often adulitified and hypersexualized as a "Disney wild child" and at different points has suffered from addiction.

Early in their careers, and for Spears to this day, both were denied the agency in creating their public images that young women in pop like Lorde and Eilish thankfully seem to have more of now. The consequences of being denied this agency, as Lorde notes, can leave someone feeling "f*cked up," or force them to deal with the mental repercussions of being exploited and hypersexualized for years to come.

Industry sexism and sexual exploitation of women remain, but the growing ability of artists like Lorde to build careers around what's comfortable for them and embrace a sort of body neutrality is cause for hope.

"I think it all worked out," Lorde told the Times. "How my body looks is not a big centre of curiosity now," she said. "Which I think is in part because of the grounding I lay as a teenager. So yeah – I feel good about baby me doing that for future me."