This is how easy it is to get ivermectin, the dewormer drug that conspiracists say cures COVID-19 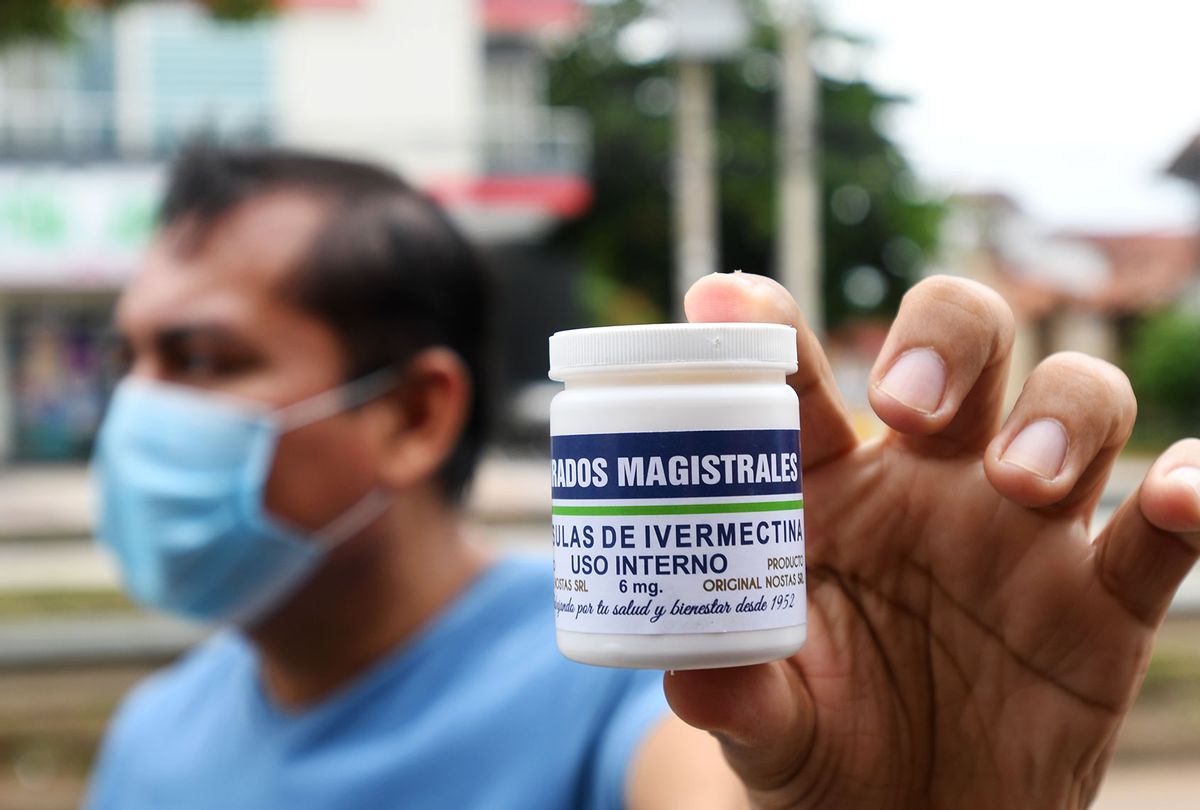 A man with a mouth guard shows a can of ivermectin capsules as he comes out of the pharmacy. (Rodrigo Urzagasti/picture alliance via Getty Images)
--

It started with an email, sent to a doctor source whom I frequently interview for pandemic stories. I was thinking about what one might call the ivermectin epidemic, in which hundreds of thousands of Americans are taking the off-label horse de-wormer drug as a sort of COVID preventative — despite scant evidence for its efficacy and a host of miserable side effects.

"How easy is it to get a prescription for ivermectin?" I asked.

His response: "Google 'ivermectin' and your city."

So I tried it, typing "ivermectin, San Francisco" into Google. An ad for a telehealth platform called Push Health popped up. Sure enough, the company had a dedicated page on its site about obtaining ivermectin. While the company did not explicitly say it could be used to treat COVID-19, the breeziness of obtaining a prescription advertised by the platform made me think that their page likely had something to do with the rapid increase in interest for the drug in the United States

On August 13, 2021, prescriptions for ivermectin peaked, with more than 88,000 written just in that week, according to the Centers for Disease Control and Prevention (CDC). That's a 24-fold increase compared to pre-pandemic times, when prescriptions averaged 3,600 per week.

The rise in ivermectin isn't because there's been a rise in internal parasitic infections. As I've reported before, ivermectin, which is an off-label anti-parasite drug used for the treatment of certain parasitic worms in people and animals, has become the new hydroxychloroquine — in the sense that it is an ineffectual treatment for COVID-19 that has gained currency among those who are skeptical of science. Just as hydroxychloroquine was hyped by right-wing politicians (including President Trump) as a possible treatment for COVID-19, conservative talking heads and anti-vaxxers are now promoting ivermectin to their audiences despite limited scientific evidence showing that it is a viable treatment for COVID-19. Some experts who study misinformation have argued the ivermectin-pushing agenda is a means of promoting the narrative that science is innately untrustworthy because an alternative treatment has been unfairly maligned by science and government.

Since ivermectin is already Food and Drug Administration (FDA)-approved, it can be prescribed by any U.S.-based physician, usually to people with intestinal strongyloidiasis and onchocerciasis — two conditions caused by parasitic worms. Generally, the prescription is given in very small doses. Without a prescription, the only other way to obtain ivermectin would be at a feed store or farm supply store, which sell the drug as a horse dewormer. Consuming the latter form of ivermectin is, for obvious reasons, very dangerous. Yet people are still doing it. In Mississippi, 70 percent of recent calls to the state's poison control center were related to "ingestion of livestock or animal formulations of Ivermectin purchased at livestock supply centers," the state department of health said in a news release last week.

The FDA, Centers for Disease Control and Prevention (CDC), and multiple state health departments have issued warnings against taking both the feed-store kind, and the human formulation, to treat COVID-19. Despite the human prescription being used variously in treating internal and external parasites, ivermectin can mix with different types of drugs negatively. Likewise, higher dosages — which have been promoted unscientifically as a way to treat COVID-19 — can have profoundly negative side effects, ranging from diarrhea to nausea to severe skin rashes. High doses can be toxic. Most importantly, there is no sound scientific evidence to suggest that it can help treat COVID-19. For people who don't know that, or choose not to believe it, a prescription for over-the-counter ivermectin is easy to obtain.

After doing a little research to make sure Push Health wasn't a take-my-money-and-leave scam (by the way, I don't recommend using the platform for anything), I decided to move forward and pay $65 for a consultation to follow my curiosity.

On Push's site, I filled in information about my local pharmacy — where I'd pick up my prescription. Then I typed in basic information about myself, like birthday, contact information, and home address. The next part asked me what type of medication I wanted, and the reason I wanted it. I simply typed "ivermectin" and then "Covid."

After submitting my patient information and paying for a future virtual consultation, I was told via email that I'd be "matched" with a provider in 24-48 hours. But only three hours later, I was matched with a doctor who allegedly went to New York Medical College; and there was no video consultation, just word that I had been issued a prescription that read as follows:

(Doxycycline hyclate, by the way, is an antibiotic. I didn't ask for it and am not sure why it was prescribed.)

An hour later, I got in my car and drove to my local Walgreens. I decided to go through the drive-through, provided the pharmacist with my last name and date of birth, which showed my prescription was in the system. There, I discovered that, since my health insurer does not use Walgreens, I would have to pay out of pocket for both medications, which would total more than $200.

Before issuing the drugs, the pharmacist asked questions about what I was going to use it for.

Echoing what thousands of other Americans believe, I said, simply: "Exposure to COVID."

He scrutinized me. "Both the FDA and CDC have warned against using it for this reason," he said. He asked about the prescription's provenance; I told him I got the prescription off of a telehealth platform.

"It doesn't work for COVID-19," he continued. He advised calling my doctor for clarity. I left without my ivermectin.

As I drove away, I wondered if I had spoken with a pharmacist who cared less — and were more willing to pay out of pocket — would I have been able to drive off with ivermectin? Probably. My attempts to get ivermectin as a prescription had failed only at the final stage, thwarted by a concerned pharmacist.

Back home, I dug deeper into the internet, looking into the other options that an enterprising ivermectin-seeker could pursue. A quick search for "how to get ivermectin" on Reddit revealed many people seeking prescriptions were calling doctors recommended by a nonprofit organization called the Front Line COVID-19 Critical Care Alliance (FLCCC). The contact information for FLCCC-recommended doctors is listed on their website. I emailed, texted and called seven; four quickly responded and were willing to do a consultation with me — for a fee between $60 to $100 — and write a prescription for ivermectin.

The organization known as the Front Line COVID-19 Critical Care Alliance was created during the pandemic, and has been criticized for promoting the use of ivermectin based on unsubstantiated scientific evidence. In March 2021, editors of Frontiers in Pharmacology took down an article that was written by a member of the organization because it violated the journal's policies.

"The authors promoted their own specific ivermectin-based treatment which is inappropriate for a review article and against our editorial policies," said Dr. Frederick Fenter, Chief Executive Editor of Frontiers, in a statement. "In our view, this paper does not offer an objective nor balanced scientific contribution to the evaluation of ivermectin as a potential treatment for COVID-19."

In December, the FLCCC's president, Pierre Kory, gave a statement at a US Senate hearing on COVID-19 treatments and called ivermectin a "miracle drug." On Twitter, Kory has described the media's criticism and any doubts about its efficacy as a treatment for COVID-19 as a "war" against the drug.

Only 41% of the population of Arkansas is vaccinated against COVID-19, well below the 51% of Americans overall who are fully vaccinated. Some rural Arkansas counties have vaccination rates as low as 10% of the overall population, according to the New York Times.

Yet like many Southern states, a great deal of Arkansans are flocking to ivermectin as an "alternative" COVID-19 treatment. Indeed, pharmacists in the state are seeing an uptick in ivermectin prescriptions, pharmacist John Vinson, who is also the CEO of the Arkansas Pharmacist Association, tells me. Sadly, Arkansas has seen over 20 overdoses due to people taking the version of ivermectin meant for animals.

"The larger of the two concerns that we have as pharmacists — if we had to pick between the two — would be the use of a product that a patient would purchase in a tractor supply store that's intended for animal use," Vinson said. "But it is true that with prescribed doses that are meant for human consumption, there is always the possibility of adverse effects — which is why we have recommended dosages and why there's a physician involved in that decision-making with the patient."

Both pharmacists and the CDC suspect that many of the prescriptions for human use are coming from telehealth platforms — or, as one pharmacist called them in Time magazine, "quack telehealth prescribers." Many such online providers appear to be part of for-profit schemes. According to Time's investigation, a right-wing group called America's Frontline Doctors has been allegedly taking peoples' money by promising to give them a telehealth consultation for ivermectin. It is unclear how many of the providers listed by the FLCCC are legit or not.

The FLCCC did not respond to any request for comment about providing a list of doctors to get ivermectin prescriptions, which included one on the Push Health network. I revealed myself as a journalist to the Push Health doctor, and asked how it was possible that he wrote a prescription for me without even a virtual consultation. He did not respond.

How medications are prescribed varies state by state, but some pharmacists — like the one I encountered — have become the last line of defense against dangerous pseudoscience.

"We are advising our pharmacists to certainly ensure that there's a patient-physician relationship, and to talk to those physicians or nurse practitioners who may be prescribing it, and to learn where's their evidence [from]," Vinson said. "Our role is to educate our patients and provide context and information; in some cases, pharmacists may work with their patient to actually not fill that prescription."

Vinson said it's a "fine line" when it comes to questioning the filling of off-label prescriptions."There are many other conditions and diseases for which off-label use of FDA approved medications have been used, and in many cases, that off-label use really helps people," he noted. Part of the pharmacist's job, however, is identifying what could be dangerous.

"If we start to see danger, like we did with opioids and benzodiazepines in recent years, then we could start to see more and more pharmacists that may refuse to fill a prescription based on what they feel is a danger to the patient," Vinson said. "Some of the treatment doses for ivermectin are higher doses than what is normal for other infections, and so then you get concerned about potential overdose or potential adverse effects that don't show up at the lower doses."