"Wildhood" is a Two-Spirit liberation: "I’m done with Indigenous and queer characters that are sad" 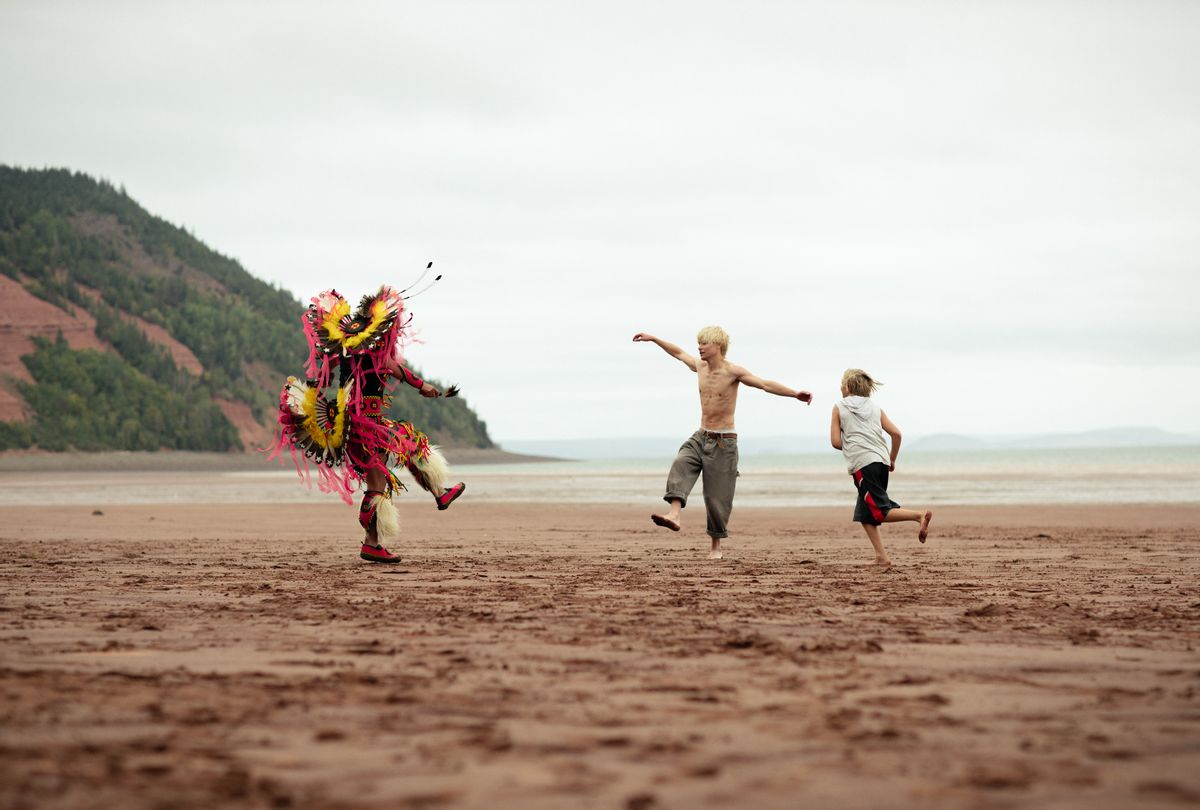 Bretten Hannam is a Two-Spirit, non-binary Mi'kmaq person, whose film, "Wildhood," about Link (Phillip Lewitski), a Two-Spirit Mi'kmaq teenager, is having its World Premiere at the Toronto International Film Festival this week. The feature is expanded from Hannam's 2019 award-winning short, "Wildfire."

The film takes a road movie narrative as Link, and his younger half-brother, Travis (Avary Winters-Anthony), flee their abusive father, Arvin (Joel Thomas Hynes), and search for Link's absent mother, Sarah (Savonna Spracklin), who, until recently, Link believed to be dead. On their journey, they encounter Pasmay (the scene-stealing Joshua Odjick), a Two-Spirit, as well as Smokey (Michael Greyeyes), a baker, along with other Indigenous folks who help Link and Travis.

The film is an auspicious feature debut. Hannam displays a real sensitivity in telling a story about community and family. Link is an angry, impulsive teenager — he often speaks and acts before he thinks — but he is searching for a sense of belonging, questioning his family, his sexuality and his Indigenous identity.

Hannam spoke with Salon about "Wildhood" and the Two-Spirit and Mi'kmaq communities.

Given how few Two-Spirited Indigenous filmmakers there are, what drove you to become a filmmaker?

I've always been a storyteller, even when I was young, I would make up stories. Most people would just say I was a liar. [laughs] I have always been into creative expression — usually with writing or drawing. I went to the Nova Scotia College of Art and Design, and I studied painting and drawing. I didn't want to study film. I wanted to study fine arts. But when I began to engage in that process, someone encouraged me to check out the film program, so that is how I got into it. It ties back to when I was growing up, I watched a lot of movies — but none of them were queer. And the only Indigenous stuff was in the Westerns my dad would watch, and the [actors] were, by and large, not Indigenous people. As I started to make short films, they were inherently queer or Native Indigenous stories, and as I figured out my identity and my community, and where I fit, there were a lot of dissenting voices from different directions — "You can't do that" — and that makes me want to prove them wrong.

The film is very much about feelings of shame, and worthlessness, but also freedom and independence. What decisions did you make regarding the characters?

It is easy when you're dealing with this type of story to become too heavy, or dwell in melodrama, but the goal was to play characters who are real and complex and occasionally contradictory. People are fascinating, and characters should also be fascinating and have those layers. There was a lot that went into building up their backstories — who they were, and where they came from. I created these young people who have all these things going on inside of them — Link is angry, and has shame, guilt, and feeling that he's not enough. Pasmay has similar issues, or stones in his shoe, but they are different aspects. So, it becomes more how do these individual characters deal with those difficult feelings? Everyone had different tactics to deal with being sad, or bummed out, or pissed off. They are both internal, but Pasmay tends to joke more, and Travis has no filter, so those tactics bring the characters to life. Part of that is working with the actors and talking about how they relate to the character and see how they can draw things from their own life and adjust scenes to align with their realities and experiences. I'm done with Indigenous and queer characters that are sad or hard all the time.

The film examines issues of identity and belonging — to a family, to the Mi'kmaq people, and to the LGBTQ/Two-Spirit community. Can you talk about these intertwined themes?

The Mi'kmaq approach is more holistic than separate labels and separated out parts of an identity. Two-Spirit identity is an intersection of the relationship to land, gender, sexuality, ceremony, and culture. It's hard in English to summarize or speak about those things succinctly. For Link going on this journey, he is finding out where he fits in all of these aspects, and what it means to be part of a community. There's a word, tami wettabeksi, which means "where I spring from." Finding his mother is literally where he comes from; the connection to his ancestors and culture inform who he is and answer questions he doesn't know he has. Alongside of that there are the gender and sexual identities that are developing, and his relationship with Travis and Pasmay, the family unit he is developing. These are microcosms and macrocosms of community.

Family units are very damaged in "Wildhood." What can you say about this dynamic Link, Travis, and Pasmay form? There is the biological family and the chosen family.

To me those things align well — the family you are born into and the family you choose, or you find. In this situation, there is a little overlap. He's taken Travis and left with the good things and found other good things. We call that etuaptmumk, which means seeing two ways. Pasmay's family are not seen, but they are felt through him. Link and Travis become his actual family. He tries to joke about [his estranged family], or brush It off casually, or convince himself it's not important. But there is an example of family within the film that is multigenerational, and features a lot of openness and sharing. Compare that to what the boys have — they have the same thing: they share food, sit, and tease each other.

The film introduces viewers into the Mi'kmaq world. How did you incorporate the Mi'kmaq people in the film, and how did Indigenous representation inform "Wildhood"?

Mi'kmaq have been here for over 14,000 years. The lands and animals have provided everything from language, culture, ceremony, and song and that is what builds up to now. The act of shooting here, and being on the land, is rooted in the people. The language as well, it contains the worldview of the people. It's not like English. One word can explain a complex idea. There are nine ways to say, "I see a red chair." Most of the language is words that are happening now. There is no "table," but "tabling." It's being that thing, or in the process of being, so that very notion is rooted in all of the approaches and ways of learning. Pasmay teaches Link dancing, and different people teach him different lessons — so he's rebuked for misgendering someone, or how he interacts with the elder is a big component of that relationship. It's all about relationships.

I appreciated that you build some real sexual tension between Link and Pasmay. Can you discuss your depiction of the queer content and sexuality?

It's not a coming out story; it's about Link understanding who he is and the world around him. This is not something to be ignored, or something to build the table around. It's another part of who he is. He likes dirt bikes, he is quick to anger, and he's gay. He's a young person and still figuring things out. Link is not aware of things, whereas Travis, even with one eye, can see how Link and Pasmay interact. It's very subtle and understated, but there a lot of looks.

I also want to talk about the depiction of masculinity in the film. Link is an angry young man who is impulsive and questioning his identity. He has a bad dad, a wounded brother, and a tolerant uncle. He meets Pasmay, who is tender, supportive, and protective, and Smokey, a kind stranger. Can you talk about the representations of the male characters in the film?

Gender identity from a Mi'kmaq perspective. The word for man is jinm, and the word for woman is e'pit. But what they mean — Jinm has a root in the word "the one who does the paddling" and e'pit means "to sit in the canoe and navigate." Those ideas of man and woman are colonial. They are imported ideas. Looking at what Two-Spirit people do, and what gender roles are, and things become much blurrier. I love to challenge the notion of what people find to be acceptable masculinity. It's a lot harder to be vulnerable than it is to be macho. In this film, there is a moment when they are speaking openly and emotionally about their history and backstory. I think that's nice to see — not that I like to see people cry but — seeing Two-Spirit male-body characters to be open to those emotions and share them and share them with each other rather than that "man up" attitude and toxic masculinity. Who has more courage and bravery in them to be themselves? Is it the straight-acting or appearing musclebound hunk guy or the effeminate guy marching to his own f**king tune? There's one that is going to get s**t but continues on, and one who passes and continues lives life undisturbed more or less. Of course, people are dynamic, but . . .

"Wildhood" moves from a claustrophobic trailer to wide open land and waters. The visuals in the film express the character's emotions. What can you say about the use of space in the film?

Link grows up in a trailer in the rural area but doesn't know Mi'kmaq. He doesn't know language and is not exposed to culture, or the queer world. It's a small contained world he lives in. He crosses a bridge into this new world of mostly open spaces. They are on land in the open under the sky. They will go into places — a nightclub that is a cave situation — to find things, or learn lessons, and discover where they are going next. But by and large, the characters are free, not stuck in a box. Just like identity in my opinion. If you are going to pick a label for yourself, that's fine, that's your choice, your power. But if other people try to pick a label, or stuff you into a box, seldom do you fit, and occasionally, you will burst out, burn stuff down, and run away. There is a whole world and experiences that opens up. As the film progresses, there is more on the land. People think there is nothing there, but it's quite the opposite. It's very full — there are hundreds of different plants and trees and animals. When you see these animals and things close up, you realize it was all around you all the time. They are still in the same world, but Link is not in that box anymore.