From "The Good Place" to "Nine Perfect Strangers," Manny Jacinto breaks from "driving the chaos"

The actor spoke to Salon about Tranquillum, working with Nicole Kidman, his career and "Top Gun: Maverick" 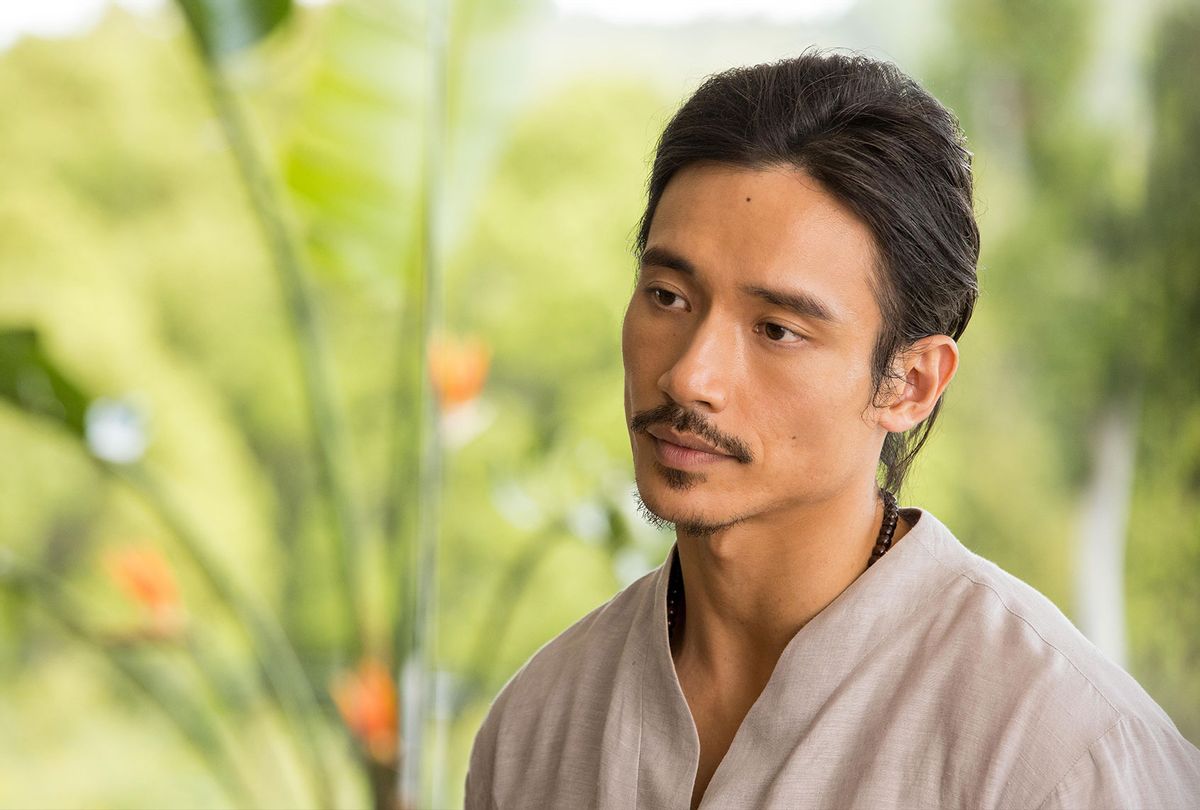 From its first episode, "Nine Perfect Strangers" hinted at something more sinister beneath the surface of its health food smoothies and sunlit gardens and waterfalls. Finally, that darkness is beginning to be exposed.

It turns out that the unnervingly charismatic Masha (Nicole Kidman) chose the titular nine strangers to stay at the Tranquillum resort for specific reasons dealing with their past traumas or struggles with self-worth. Throughout their stay, they've been dosed with psychedelic drugs without their knowledge. The Marconi family eventually hallucinates interactions with their dead son, causing the situation at Tranquillum to reach a fever pitch.

This puts dedicated resort employee Yao, played by "The Good Place" scene-stealer Manny Jacinto, in a bind. His co-worker and lover Delilah (Tiffany Boone), becomes determined to flee the premises before events inevitably spin out of control, and she wants Yao to join her. The only hitch? Yao is extremely loyal to Masha and Tranquillum, which the former EMT seems to genuinely believe is helping people. He also might just be in love with their vulnerable yet imposing boss, with whom he shares plenty of intimate scenes and underlying sexual tension.

"I had to put behind the subconscious thoughts of, 'Holy s**t, this is Nicole Kidman by me,'" Jacinto told Salon in an interview about working with the Oscar and Emmy winner.

The soft-spoken, mild-mannered Yao is a significant departure from Jacinto's role as Jason, the beloved goofball on NBC's beloved, philosophical comedy, "The Good Place." But it's not so different from other recent roles he's assumed, like the determinedly loyal friend and local drug dealer Code in Netflix's "Brand New Cherry Flavor," and as a young pilot named Fritz in the forthcoming Tom Cruise action flick, "Top Gun: Maverick."

Jacinto talked to Salon about building the "push-and-pull" of an onscreen love triangle, getting into character as a possible cult member and his goal of "driving the chaos" in future roles.

How has the last year been for you, between COVID and your new shows? What was it like shooting "Nine Perfect Strangers" in Australia during lockdown?

I had so much luck in terms of my circumstances. I was able to work during all of COVID, especially during these more intense circumstances. I was able to work in a place where I felt more safe. We were originally supposed to shoot in LA, but we went down to Australia, and that lingering sense of catching COVID or stopping production was minimized because we were in such an isolated place. I think at the end of the day, the word that sums it up is just, fortunate and grateful.

In "Nine Perfect Strangers" you play Yao, who seems very much indoctrinated by Masha. What was it like to play someone who's in what seems like a cult? How did Yao get to this moment of choosing between Delilah and Masha?

With Yao, you definitely have to play the line in regards to his commitment to Tranquillum and Masha, but also his love and devotion to Tiffany [who plays Delilah]. He was in this triangle, there's a tug-of-war, a push-and-pull, a balance he has to play, and it's purpose-filled vs. love-filled — which one do you choose?

At the same time, while this inner conflict is going on, he has to keep it together for all the other strangers that are dealing with their own demons. It was very interesting to play, it was a lot of fun at the end of the day.

How did you get comfortable building your onscreen relationship with Nicole Kidman?

I think this just goes to show how professional Nicole is, in terms of the stage she's at. She's just an open book, incredibly vulnerable and open, and makes you feel comfortable, especially with the scenes that we had to take on, how intimate and close they had to be.

I felt comfortable taking risks, playing it in certain ways, and not a lot of people can have that chemistry with their scene partner. I'm incredibly grateful for her because she allowed for that. I had to put behind the subconscious thoughts of, "Holy s**t, this is Nicole Kidman by me," but once I got past that, I was really able to just play at the end of the day.

What was it like working with such a dynamic cast overall?

It was the dream, I'm not blowing smoke or anything, but to be opposite a pro like Nicole Kidman, and Melissa McCarthy, and Michael Shannon and all those veterans, in the same spot and the same place and the same project, that's like winning the lottery pretty much. It was a position I tried to take advantage of, learn a lot, the most that I could. It was a dream to be able to act with them because they were so open and genuine, open to giving me, us, the younger kids lessons. It was the best time, I couldn't have asked for anything better.

Going back to Yao and the decision he now faces, how important is Tranquillum to his identity? How did you portray this conflict between his feelings toward Masha and Delilah?

With Yao, you see a bit of his backstory, his life as an EMT, that kind of world. I had to construct an arc that basically went from him being an EMT to him being this more calm, meditating person, whose sole purpose is to get Tranquillum off the ground and serve these nine perfect strangers. Through that, I was like, "OK, well Yao needs to have some sort of foundation," and that was found through just finding a new vocation, a new purpose in his life. I think he credits that a lot to Masha, his interactions with Masha. Because of that, he has such a strong devotion to her and her pursuits.

In "The Good Place," Jason begins Season 1 as a Buddhist monk, who seems to play a similar role to Yao here on "Nine Perfect Strangers." Did you feel that role or any previous roles prepared you for this show?

I did some work in Canada a bit with a character on a show called "The Romeo Section" where he was more still, he was a lot more centered, more calm, cool, collected, in a sense. Those lessons transferred over to playing Yao. If I were to take lessons from Jason, I would just have to do anything opposite Jason, just do the exact opposite of what he would do. [laughs] They're just on a completely different spectrum. I think those are the biggest lessons I took away from the previous characters.

In "Nine Perfect Strangers" and your other new show "Brand New Cherry Flavor," you take on characters who are pretty stoic and calm despite being surrounded by some real craziness. What's that like? Do you ever hope to take on roles that are more directly involved in the craziness?

Absolutely, I mean, playing Jason on "The Good Place," he is the epitome of chaos. But getting to exercise the muscles of calm and stillness is exciting for me right now. Down the line, I think a few auditions are going toward driving the chaos, and I can't wait to get back to that type of energy, because it's nothing but fun.

"Top Gun: Maverick" will be releasing soon — what can you tell us about your character Fritz, or anything else that's coming up for you?

I can't reveal too much. He's basically one of the younger pilots, he's under the wing along with other young pilots, of Tom Cruise, and he's in it for the ride just like everyone else watching. A lot of people have been waiting for this for some time now, and I think people who have seen it already have nothing but kind and exciting things to say about it, so I'm excited for everyone to see it in theaters.