9/11 brought Americans together. Why is the pandemic tearing them apart? 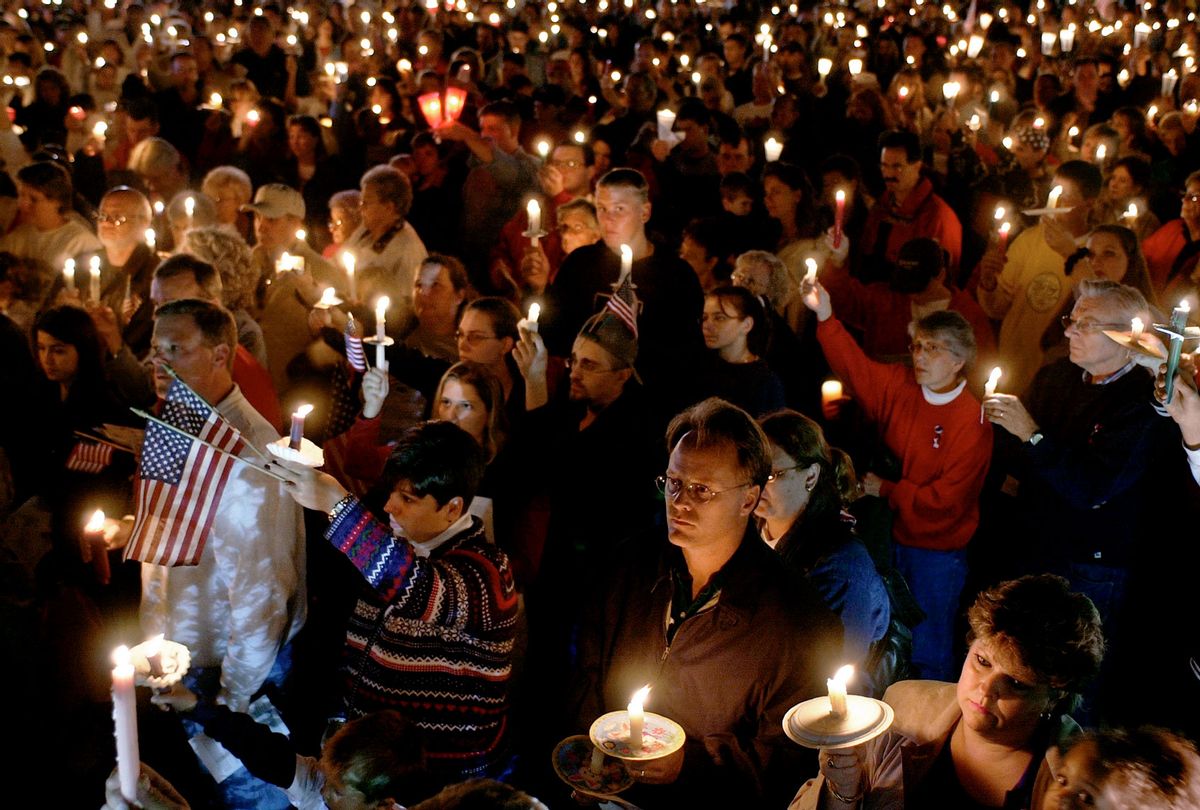 A candlelight vigil drawing over 1,000 people in the days after the devastating 9/11 terrorist attacks on New York City's World Trade Center & the Pentagon. (Steve Liss/Getty Images)
--

In a 2018 interview with Lisa Luckett, whose husband Teddy worked and died in the World Trade Center building on September 11, 2001, Luckett told Salon one memory she never wants to forget from that horrific day was the "beauty," "grace," "compassion," and "incredible strength of the human spirit" that followed.

"I never expected people to show up for me," Luckett said. Yet they did.

Like many survivors and family members of those who passed away on September 11, 2001, Luckett was struck by the unique, communal sense of unity that followed. In New York City, service members and citizens dubbed the "Bucket Brigade" volunteered on their own to pass buckets of debris to investigators as they searched for human remains. Stories of civilian helpers, from taxi drivers to ​​Hudson River rescue boats evacuating people from Manhattan, made headlines.

There is no shortage of think pieces on how Americans united around the tragedy of 9/11. The nation was in shock and grieving, but they were in their grief together. This so-called unity infiltrated the very rhetoric people used to refer back to this day. A benefit concert was billed as "United We Stand"; in remembering the awful tragedies, newscasters would often repeat the line, "today, we are all New Yorkers."

Despite the sense of national solidarity, it would be remiss not to mention the xenophobic reaction. Following 9/11, Muslim Americans were discriminated against, scapegoated, and faced an unprecedented wave of violence — very different from America's big group hug that played out on mainstream media.

Yet experiencing a collective sense of unity and a deep desire to help strangers in the wake of a tragedy isn't unique to 9/11. Sociologists and experts in disaster resilience studies often see that a "therapeutic community" surfaces in the wake of a disaster — whether that's a hurricane, wildfire, or a terrorist attack. According to the American Red Cross, the "honeymoon phase" after such a disaster occurs when people are nicer, kinder and feel a deeper sense to go out of their way to help others. Non-profits see an uptick in donations and volunteers.

The 20th anniversary of 9/11 comes at a peculiar moment in American history, when the country finds itself in another period of crisis: the COVID-19 pandemic. Yet unlike 9/11, there hasn't been an overwhelming sense of unity or kindness. In fact, the opposite seems to be occurring.

Certainly, the crises are different, particularly in the gravity of the loss: 2,996 people died in 9/11, while 653,000 Americans have died from COVID-19. It is hard to imagine that, 20 years from now, Americans will look back on the pandemic with a sense of sentimental nostalgia for the feeling of national unity that followed. Has America ever felt "in this pandemic together?" Will we don t-shirts commemorating the pandemic, the words "Never Forget" emblazoned across them?

Probably not. Americans are sharply politically divided over public health measures that could help end the pandemic, like masks and vaccine mandates. Many do not even believe the pandemic is real (although, truthfully, there were 9/11 "truthers" too; this, at least, is a familiar national reaction to tragedy).

Sure, at the beginning of the pandemic, we saw fragmented public displays of support for healthcare workers and essential workers. And there were stories about people helping their elderly neighbors by doing their grocery shopping or donating a stimulus check to a stranger. But those anecdotes are fading now, or at the very least, they aren't talked about as much. Rather, the country appears riven by the virus; Americans are having furious, even violent outbursts towards their neighbors in grocery stores, airplanes, and in elementary schools. The furor seems poised to have a devastating effect on social cohesion for years to come.

This kind of rancor over a national tragedy is a sharp contrast to 9/11, and feels incongruous. So what is it about the pandemic that makes it such a different kind of disaster, in terms of people coming together and uniting around tragedy? Experts in sociology and disaster resilience have a few ideas.

First, it may be that the coronavirus is still ongoing — and it's everywhere in the United States. 9/11 was a discrete event that took place over the course of one day (though the aftermath of the dust and smoke killed people years later). In contrast, the pandemic has lasted for more than a year, and has directly affected far more people.

That 9/11 was one day gave Americans one point of focus, explained Jennifer Trivedi, an assistant professor of anthropology at the University of Delaware who studied disaster recovery after Hurricane Katrina.

"There was really in a lot of ways, a key date and a key location that people could really focus on and kind of coalesce around," Trivedi said. "It is really hard to have a very visible, come together moment around something that's, in some ways, so scattered."

It is telling that many Americans watched 9/11 unfold in real-time from their own homes on their televisions. According to Pew Research Center, 90 percent of people surveyed said they received most of their news about the attacks from television; only 5 percent reported getting their news online at the time. The attacks had an emotional effect on the populace: People who weren't even directly impacted by the attacks reported feeling depressed and unable to focus. Pew Research Center's first survey following the attacks found that a majority of adults (71%) said they felt depressed, 49% had difficulty concentrating, and a third said they had trouble sleeping.

Together, this created somewhat of a bonding experience for many Americans.

Social media's innate tendency to balkanize users into discrete political and social groups led to a profoundly different media consumption during the pandemic. Of course, Instagram wasn't around in 2001; nor was Twitter, or Facebook. Can you imagine how 9/11 would have unfolded differently had it occurred twenty years later?

Some experts argue any possibility of unity was doomed from the start of the pandemic, in part because of how politically divided and polarized the nation was before the novel coronavirus began spreading.

"Even the very existence of this crisis is politicized and debated," said Daniel Aldrich, professor and Director of the Security and Resilience Studies Program at Northeastern University. "No one disagreed that there in fact was an attack on 9/11 that killed several thousand Americans that day."

Alice Fothergill, a professor of sociology at the University of Vermont, said former President Donald Trump's messaging created division from the very beginning.

"I think a lot of it has to do with Trump's leadership and the way in which the very initial ways that the public was presented with the problem, how the problem was defined, and how it got framed early on," Fothergill said. "Right from the beginning, that was a moment where we lost a little bit about being united because people were defining the situation in different ways, the risk was being communicated in different ways, and people chose different ways to approach the crisis. It's almost as if right from the beginning we missed our opportunity to frame it."

Former president George W. Bush received bipartisan support for his handling of the days that followed 9/11. Bush had the highest Gallup approval rating in history at the time. Democrats widely approved of the Republican president.

The same cannot be said about Trump, who referred to the coronavirus as the Democrats' "new hoax," and predicted the coronavirus would disappear "like a miracle" — at the end of February 2020.

"It's really hard to understand the lack of unity with COVID without looking at political leadership," Fothergill said. "The Trump presidency has polarized us in ways that I think affected the way this disaster played out. We often say in disaster research that sometimes disasters just exacerbate the conditions that are there already, so whatever is already operating is going to become heightened or louder."

Today, the pandemic is a horrific ongoing disaster. And the fact that it is still happening could be another reason why the nation lacked that moment of coming together, despite our differences and political affiliations.

Plus, with 9/11, ways that the average person could help were more obvious, Aldrich said.

"You could sign up to give blood, you could volunteer to join the National Guard," Aldrich said. He added that, with COVID-19, this hasn't been as obvious, as opportunities aren't as widely available. Plus, the social distancing aspect of the pandemic makes rendering direct help more difficult.

The lack of such volunteer opportunities matter, particularly because volunteering after a crisis is a way for affected people to move through their negative emotions.

"If people can find a way to help, it really helps them personally with their own emotional well-being," Fothergill said. "That's a pretty consistent finding in disasters . . . . In my work on 9/11, people were just desperate to figure out ways to help."

That's not to say that Americans weren't scrambling to offer help at the beginning of the pandemic. Yet the moment of national unity, in which Americans were applauding healthcare workers on their way to work, appear to be over.

While disaster resilience researchers have strong thoughts on how the nation's response to the pandemic contrasts with 9/11, they also are trying to factor in what this means for disasters in the future. Aldrich said in studying disaster resilience, researchers will be factoring in how political polarization, a lack of social ties in communities, and the rise of social media affect social cohesion.

"This very idea that the political party you vote for will now influence how you respond, evacuate, or listen, to health authorities — I'll be honest, it was not a top priority for my work, five to 10 years ago," Aldrich said.

Kathleen Tierney, Professor Emerita in the Department of Sociology at the University of Colorado, said she hopes the situation will "turn" in the pandemic, and that some sense of unity will surface. But the past two years have been a "lesson in absolutely how not to manage a pandemic, and how not to communicate with the public."

"It violates every rule of crisis communication," Tierney said.