Those attacks, and how we reacted to them, tore us apart as a nation — by destroying our shared sense of reality 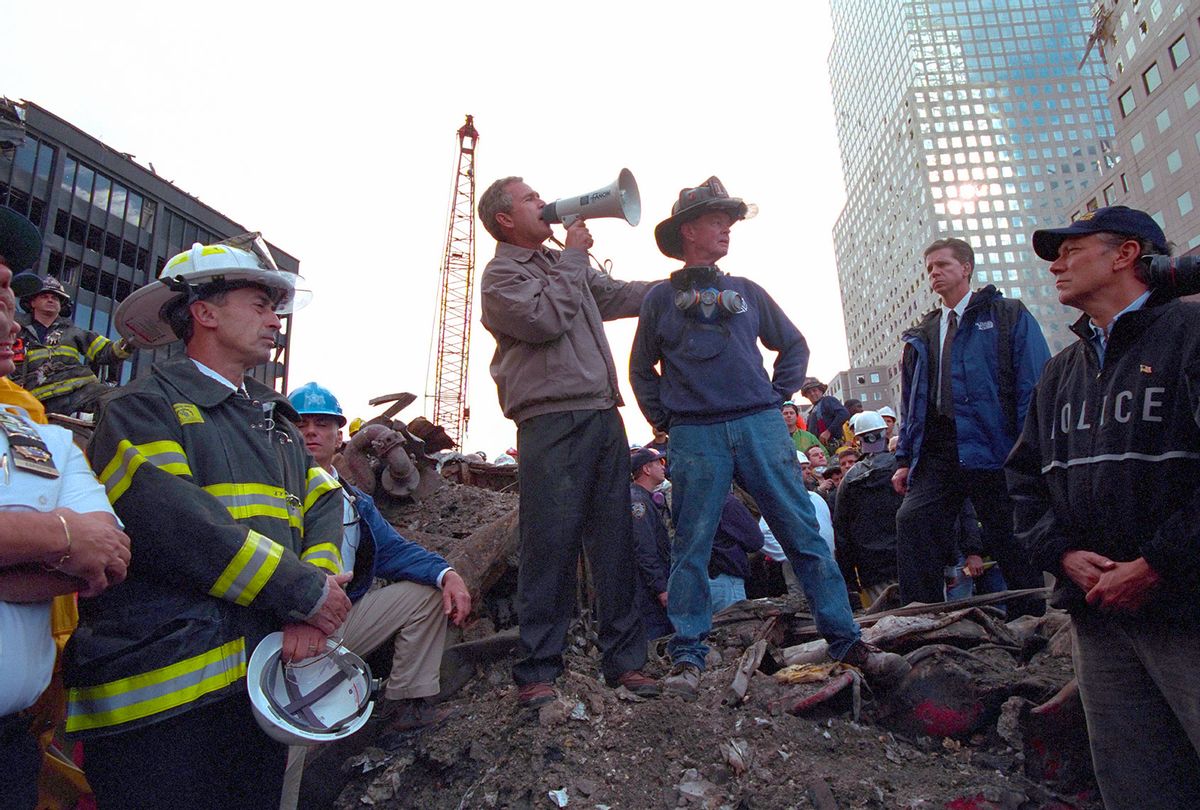 What drove this country crazy after the attacks on the World Trade Center and the Pentagon on 9/11? Was it how vulnerable we had been shown to be, that a group of 19 men armed with nothing more than box-cutters could bring the entire country to a halt? Was it that the attack was aimed primarily against innocent civilians, with nearly 3,000 killed at the Twin Towers alone? Was it that with the 19 hijackers dead in the suicidal attacks, we didn't seem to have anyone to retaliate against?  Was it that we had no grasp whatsoever on understanding why our country, the freest and most democratic ever, was hated so much that they would attack us?

I remember how disconnected things felt for days, even weeks, after the attacks. Travelers outside the country didn't have a way to get home because flights had been canceled. People stranded in cities they were visiting within the country couldn't find cars to rent, there were so many trying to get home. Everyone seemed to feel a need to gather with families and friends and hunker down, as if another attack could come at any moment.

The country's leadership was frozen, stunned. Remember the photos of George W. Bush as an aide leaned over his shoulder and whispered the news into his ear? He was the president of the United States, and he looked scared to death. In fact, he was rushed from the school he was visiting in Florida to Air Force One, and his plane took off on what amounted to a flight to nowhere as his administration tried to pull itself together and decide how they would respond. It wasn't until hours later that Air Force One landed at Barksdale Air Force Base in Louisiana and Bush hurriedly addressed the press in a windowless conference room, vowing to "hunt down and punish those responsible for these cowardly acts." Three days would pass before the president was flown to New York to appear atop the rubble of the World Trade Center at what became known as Ground Zero to take a bullhorn and make the pledge that would launch the country on a trajectory that has yet to change: "I can hear you!" he shouted to the workers at the site, "The rest of the world hears you! And the people — and the people who knocked these buildings down will hear all of us soon!"

A collective madness ensued. A great scrambling began to protect us against … well, against what? Box-cutters first and foremost, it seemed, as a new regime of inspections began at airports everywhere. The initial panic over the hijacked flights would lead to the establishment of the Transportation Security Administration and the Department of Homeland Security, a kind of domestic department of defense which proceeded to put us on what amounted to a wartime footing within our own country that persists even today. How many times have you had to throw a set of fingernail clippers into a bin at airport security because a TSA agent was defending us from terrorism? How about removing your shoes because a lone lunatic made an unsuccessful attempt to blow up an airplane with a "shoe bomb"?

The entire paranoid regimen under which we still live 20 years later grew out of a supposed "war on terror" begun after 9/11 that has never ended. It took a decade to find and kill the actual terrorist who ordered the attacks on 9/11, but in the meantime two shooting wars were launched, only one of which had even the slightest connection to the terrorists who attacked us. There was an elemental problem: The war on terror wasn't against an enemy, it was against an idea, and ideas don't die when you hit them with bombs and bullets.

And so, without a readily definable enemy who could be seen and shot and killed and defeated, which is what wars are usually for, lies were substituted. We were buried with lies, and not just any lies. They had to justify the movement of hundreds of thousands of troops and the expenditure of trillions of dollars in treasure and the loss of thousands more American lives than died on 9/11 and countless more lives — enemies, civilians and, my goodness gracious, even a few real flesh and blood terrorists.

Sept. 11, 2001, was when the Big Lie was born. Or should we say, Big Lies, because they came fast and furious. By now they are known to be so completely without any basis in reality, so wholly bogus, that they hardly bear recounting. Weapons of mass destruction? Connections between Iraq and its government and leaders and the terrorists who attacked us on 9/11? Ha!

And then came new Big Lies to support the earlier Big Lies: that we were "winning" the war on terror. How many times were we reassured that all those lives and all those dollars were not being pissed away for nothing? How many times were we reassured that we were rebuilding the countries that hadn't needed rebuilding until we attacked them? How many times were we told of the miraculous training of the Iraqi and Afghan armies? They even invented a new word that I never learned in the classes I took in military history at West Point, a word to describe the magic bullet that was going to win both wars: the surge. If only we sent 10,000 or 20,000 or 30,000 or 50,000 more troops, we could  win the mythical war on terror.

"Shock and awe" was a lie. "Taking Baghdad was a lie. The army of Iraq just went away. The "surge," each and every one of them, was a lie. "Winning" was a lie, every single time the word was used. Every. Single. Time. The Afghan army was a lie. It didn't even bother surrendering to the Taliban. It just went … poof. The Afghan "government" was a lie. It too went poof. The Iraqi government is a lie. Everything we have done to win the war on terror for two decades, 20 long years, has been a lie. We wasted trillions of dollars that could have been spent to, I don't know, feed hungry children in Arkansas? Pay for health care for poor families? Send kids to college? Reduce our dependence on fossil fuels and save our planet?

The biggest Big Lie of them all was that it had meaning, that we accomplished something, that we somehow won the war on terror. Terror hasn't gone away. Hell, we're growing it ourselves now, right here at home.

I'll tell you another war we lost, maybe even a bigger and more important war than the war on terror. We lost the war on truth. And we were warned. Oh yes, we were warned. Take Donald Trump's first Big Lie right after 9/11 as just one example. He claimed — I hope you're sitting down for this — that he could see from his office window in Trump Tower crowds of Muslims across the Hudson River, several miles away, on the roofs of buildings in Jersey City, cheering as the World Trade Center fell.

Remember that one? It was such a patently outrageous lie that it zoomed right past without anyone noticing as the rest of the Big Lies hit one after another.

But Trump got away with it, and he learned from it. Oh, yes. He learned how the Big Lie worked. He learned from watching Bush get away with lying about WMDs, and he learned from the Big Lies that we were winning in Iraq and Afghanistan. So he started trying out other Big Lies of his own, like the one about how Barack Obama wasn't a citizen of the United States, that he had a fake birth certificate, that he was a "secret Muslim." Remember when Trump was all over the TV for days and days claiming that he had sent detectives to Hawaii? All we had to do was wait and he was going to reveal the "truth" about Obama.

He learned that if he told Big Lies that were big enough, and if he repeated them enough times, that he could get away with it, just like Bush got away with lying about WMDs to get us into Iraq. And his party, the Republican Party, learned right along with him. Look at what they are doing right this minute about the insurrection he incited against the Congress of the United States in his naked attempt to overturn the election he lost. Donald Trump and the Republican Party are on a campaign to deny that it happened. They are trying to make a case that it wasn't Trump supporters who attacked the Capitol, it was somebody else, and those who were arrested are political prisoners facing false charges … and on and on and on.

The legacy 9/11 has left us is that there is no common set of facts we can agree on about anything: Not about the COVID pandemic and masks and vaccines; not about the climate change that has killed hundreds and left town after town burned to the ground or under water and destroyed by tornadoes and hurricanes. We cannot agree that votes counted amount to elections won or lost.  We cannot even agree on the common good of vaccines that will save us, that science is worth studying, that learned experts are worth listening to.

Lies began tearing us apart after the attacks on 9/11, and we have not regained our footing as a nation. The question hanging over us now is whether we ever will.