In "Whether the Weather Is Fine," typhoon survivors "transform from being zombies to becoming human" 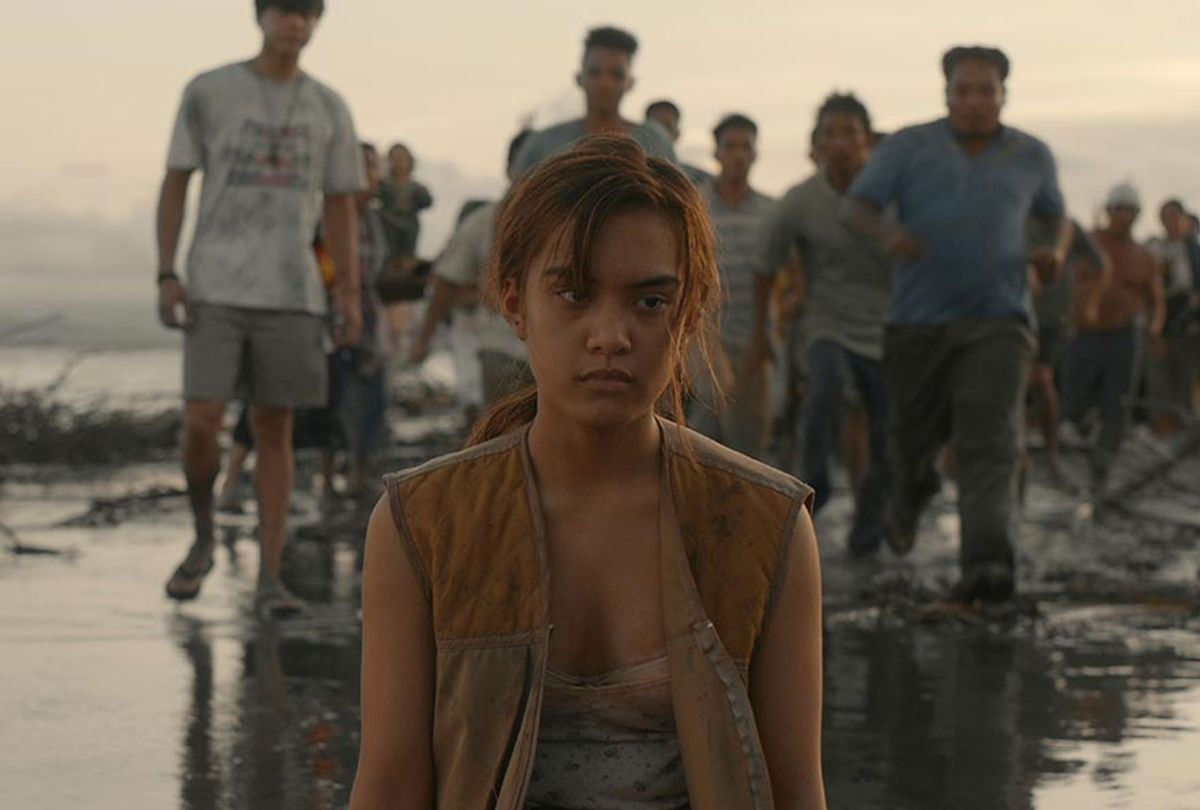 Whether the Weather Is Fine (TIFF)
--

Filipino filmmaker Carlo Francisco Manatad has edited nearly 100 films, but "Whether the Weather Is Fine," is the first feature he has directed. This impressive drama about three people in Tacloban City coping with the aftermath of Typhoon Haiyan, just had its North American premiere at the Toronto International Film Festival.

The film opens with sounds of wind and rain and images of the storm before Manatad's dazzling overhead shot of Miguel (Daniel Padilla) lying on a couch, surrounded by rubble. The atmosphere is both tense and tactile, and Daniel and his friend Andrea (Rans Rifol) wade through water and corridors of debris searching for his mother Norma (Charo Santos), who is searching for her injured husband.

As the three survivors wander around the city, and aim to board a ship for Manila, they have a series of encounters that range from frightening to magical. But they also face some moral issues and are forced to make some irrevocable decisions.

Manatad spoke about making his ambitious and accomplished film, "Whether the Weather Is Fine," which would have extra resonance for folks who've recovered from the aftereffects of tropical cyclones, such as Hurricane Ida.

This is your first feature film as a director. What prompted you to tell this story, having worked as an editor for so long?

I think working as an editor helped. I graduated from the University of the Philippines Film Institute, and I wanted to become a director, but everyone in my class wanted to become a director. I didn't want to compete with them; you cannot delve into the industry that fast. So, during film school, I concentrated in something I'm interested in, and editing is, in a sense, a kind of directing — you have this control over the story and can actually change some of the narrative. So, I focused on editing. After a few years, I realized I've edited a lot of films, so let me try directing. I started making shorts. If it doesn't work out, I can still go back to editing.

I was working on the feature for a while. I spent seven years developing it. When the storm happened, it was really traumatic. I realized I had to tell a more fleshed-out and personal story; I had to put my experience into the film. If I had made this earlier, it would have been a different film. The whole process gave me liberty and confidence to do this. Editing helped me collaborate with directors and talk to them about their mistakes and what not to do. I got all these ideas from them.

What can you say about your, or your family's experiences, with Typhoon Haiyan that inspired the film?

I have been working in Manila for many years, and I don't go home to Tacloban that often. Going home, I felt awkward or insecure. I went back [after the storm], and it was the most surreal experience. I arrived in a place where I was born and raised, and knew everything geographically, but it felt like a new place. I didn't know where to go. I was on board a military plane to go to Tacloban, and I had images from the news that everyone was dead, and there were corpses on top of each other. On the flight, I programmed myself that everyone was dead. I arrived, and my only concern as I was walking through the ruins, was if I saw my family dead, I wanted to give them a proper burial. As I was going to my home that was destroyed, I saw my friends were dead. I saw all these familiar things already gone. But, luckily, I found almost all of my family. The only thing that mattered was to leave that miserable place. In the Philippines, we have the concept of being very territorial. My dad was like, "No, I won't leave, everything will be fine." I said, "Look around you. Nobody is alive. It's good that we're alive. Let's just leave." He was pushing it to the point that we actually fought, almost physically. He was born here and wants to die here.

The film's landscape is extraordinary and surreal. The background characters are not unlike zombies roaming around the rubble. What can you say about shooting the film?

We shot this film years after the storm, so the locations we used were basically back to normal. If you go to the location, it's as if no storm passed by. We had to recreate everything from scratch. Because of budget constraints, we had to recreate things in Manila. There were some non-negotiables for me — especially key scenes, like those in the Astrodome relief center — and we shot on location in Tacloban. I had been collaborating with my production designer, Whammy Alcazaren, on my shorts, and he understood what I wanted. We had reference photos and I really wanted it to be as authentic as possible, so the slightest detail had to match the reference photos. It actually took quite a while; the set-building took two to three months. With the production design and cinematography, they knew the look I wanted.

The characters go to some dark places, walk through murky water, and are constantly reminded that they may have lost everything. There is a real emotional pull with that which comes across in the film, and it is felt with every tracking shot. How did you conceive the use of space in the film?

With this kind of film, the use of space and the trickiness of using the space actually matters. The film's treatment is meant to be post-typhoon. Usually you see all these things going on, but in key scenes, where you need to see that, I don't show it. Because the film is a journey of the characters. You know the synopsis, and the space is always with them, regardless of their movement. I want the film, in a general sense, to follow this journey of being lost with the characters. I didn't want the space to obstruct the viewers. It's a messy, organized chaos. You follow something, but there's something going on in the background, then you follow them again. Everything is journeying, and there is a sense of geography, but they don't know where they are going. It's a walking film. You walk, arrive at this point, and then they walk again.

"Whether the Weather Is Fine" is in that genre of road movies that never leaves town. What decisions did you make with the narrative and the difficulties each character would face?

I needed all these roadblocks to slowly create the essence of the violence that they have had all their lives. At this very moment, you see how it progresses until it explodes. The particular moments may not be dramatic, but it can be the violence of the space, or the event. Sometimes nothing happens actively, but the visual is violent in essence. The more it pushes the character, the greater the impact when something has to be decided.

What can you say about themes of faith, politics, and belonging in the film? There are moments of prayer, encounters with authority figures, and a sense of community.

The Philippines is a Catholic-dominated country. I went to a Catholic school when I was young. I'm Catholic, but I'm not practicing. I believe there is a higher being, regardless of who it is. I question how religion makes up a community and how this community performs or how it effects another community. A big thing that I wanted to push forward is that in disasters like this, money is not even a currency. People try to find something to look up to. What I portrayed with the authorities or the government are contrasts. "You have this storm coming," and "The storm is not coming." Religion is the only thing [people] cling onto, because there is nothing more. But if you cling to it, does it give something back? By just believing in something, they feel something positive. I'm not saying I'm anti-religion, but how do they see religion in times like this? Religion can bond people together, but believing in something higher than you, you feel that there is certainty regardless of what it is. And in the Philippines it's always like this. You have to adore and pray to this God, and it will give something back. But it's uncertain. It makes them feel good. Faith doesn't give you answers back. It's just there. It depends on how you interpret and how it affects you. It's a choice, and it's within you how it affects you.

There are also moments of levity in the film. You have a nice scene at a tattoo parlor, where Andrea inks Miguel, and there is a flash mob-like dance scene, and children playing. Can you talk about creating the tone of the film? The images are so heavy, but there are some very life-affirming scenes.

When you see all these films that discuss tragedy, or are "post-apocalyptic," they can be super dark and melodramatic. I felt that the film, with all this violence, and people trying to survive, and all the things that are actually happening, I wanted to have specific moments that were mundane, absurd. But these moments transform the characters from being zombies to becoming humans again. They talk about their future, their dreams, their hopes. It's cliché to say, but it has the effect like coming of age of a character. Andrea is very spunky and aggressive and jokes a lot, but she had dreams, and maybe she has lost her family, but she pushes on. That comes from what transpired. Miguel has been a good son, who follows his mom and Andrea, but his journey helps him find his own freedom. Is that the freedom that he always wanted? It's also nice to look at the random characters of the kids. This is based on what I thought when I experienced it — there are people crying and weeping, and I always saw kids just playing. They were the ones who just thought straight. Their innocence plays a bigger part on the violence they have endured. They are more mature. The older people are in a dog-eat-dog survival mode, and then you have these kids who have more control than the adults. This dictates how the space and place will be in the near future.