A fond farewell to the "Brooklyn Nine-Nine" hero cops, who are ending this ride along just on time 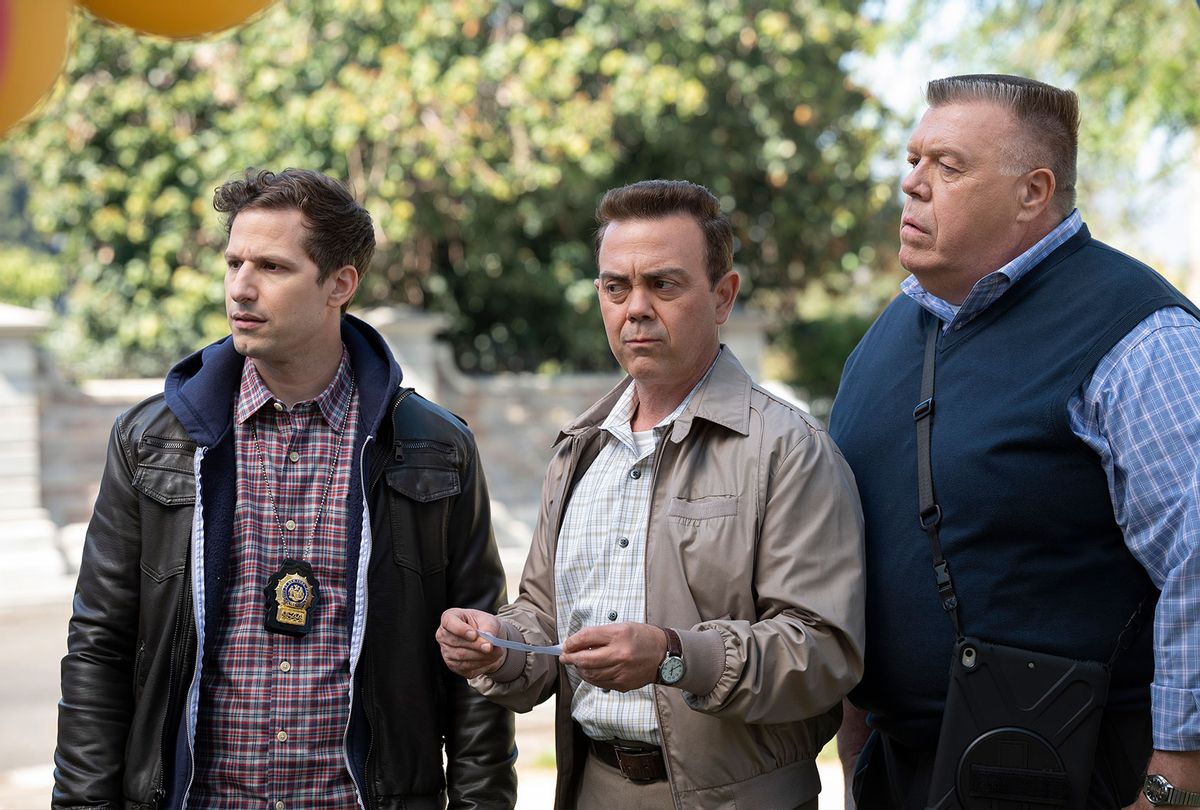 At various points throughout the show's eight seasons Jake's "Die Hard" worship and generalized fandom for other bullet-riddled classics has gotten him into trouble. Usually we can laugh at the scrapes Jake gets himself into.

The recently aired episode called "The Set Up" ends that streak. What begins with Jake excited to be handed a case involving a bomb threat on a bus – "a 'Speed!'" he giddily calls it, all but skipping towards cinematic danger – ends with his suspension.

This is a just punishment, because Jake arrests an innocent man. The resulting wrongful detainment causes the man to lose his job, so he sues the department.

That's not enough of a deterrent to stop our hero. Jake tails the guy on his off-hours, suspecting he's a plant hired by this season's nemesis, the comically crooked, amoral union head Frank O'Sullivan (John C. McGinley), to mess up Jake's stellar record.

But . . . why? The answer, posits our would-be John McClane, is that O'Sullivan is doing this to wreck the police reform pilot program Jake's wife Amy Santiago (Melissa Fumero) is spearheading.

This has been Jake's M.O. through the comedy's eight seasons on Fox and NBC, and it's a major reason "Brooklyn Nine-Nine" setups work. To the detective, every tiny misdemeanor and slight has the potential to be part of a huge conspiracy – and most of the time his circuitous theorizing and dogged skepticism pays off. Eventually.

Not this time. His unnecessary surveillance earns him additional intimidation charges and a five-month benching.

When the show's eighth and final season kicked off a few weeks ago I noted the awkward position of its circumstances. Season 7 aired in April 2020, prior to George Floyd's murder and subsequent calls to defund the police, reapportioning exorbitant police department budgets to programs devoted to promoting mental health and non-violent intervention.

It was tough to see how those tense and necessary debates would square with the show's depiction of a New York City police precinct that honestly cares about the people it serves. Co-creators Dan Goor and Michael Schur, to their credit, didn't try to soften our attitudes about policing.

Instead they affirmed them while closely guarding the image they created of a goofy good cop who's also dedicated to being a good person.

As such, when Jake makes a terrible call that has a real cost to another human being, and then doubles down, he doesn't wriggle his way out of it. He claims his wrongdoing and takes the hit.

Of course, we don't witness him languishing much during his suspension since he passes the time in part enlisting Sergeant Terry Jeffords (Terry Crews) to sniff out another mystery hidden within the family tree of his bestie Charles Boyle (Joe Lo Truglio).

The following episode, and the series penultimate, marries Jake's unquenchable thirst for detecting to that sitcom-ending standard, a wedding. Actually, a vow renewal – one that reels the whole gang and former detective Rosa Diaz (Stephanie Beatriz) into one last adventure with their boss Raymond Holt (Andre Braugher), Jake's surrogate "dad."

Notice that these final half hours revolve less around the precinct than the lives of the people in it, intentionally reminding us that while "Brooklyn Nine-Nine" is a cop show, it's a workplace comedy above all.

It is also a comedy that tried in previous seasons and this one to walk the fine line between spotlighting and foregrounding the goodness and best intentions of its character and being honest and truthful about policing in America and its cops.

Past seasons jumped into issues such as racial profiling, homophobia and corruption as fearlessly as a kindly comedy could while still fulfilling its obligation to make us laugh.

In its best episodes, and that refers to most of them, "Brooklyn Nine-Nine" was a reliable feel-good sitcom. Even when Holt ran for commissioner and lost out to a stop-and-frisk-happy lug, he and the people who work for him rallied and continued striving to do the right thing.

I predict it will continue to fill that role in its streaming and syndication afterlife. But I also wonder whether, in the coming years, people will recognize the ways in which the show in its very kindly way upholds the myth of the righteous hero cop.

The writers address this in "The Set Up" when Holt, displaying the apex of his fury – a state he calls "huffy" – chastises O'Sullivan's refusal to hold aggressive, discriminatory cops responsible. Holt reminds him that when officers aren't held accountable for their mistakes, the police lose their community's trust.

Earlier in that same half hour Amy lectures O'Sullivan for attempting to block her pilot program, which enacts proposals designed to reduce interactions in which armed cops are needlessly interacting with civilians. "It could save lives and restore trust with the community."

Two episodes later both she and Holt are promoted, granting them the power to put these reforms into practice. Wish fulfillment is another staple of the sitcom's farewell, right up there with nuptials. It is absolutely heartwarming. It also upholds the unrealistic notion that somewhere out there those good apples Trevor Noah talked about – the ones we never see stopping the bad ones.

But "Brooklyn Nine-Nine" die-hards aren't going to miss this show for its procedural accuracy. They'll miss the inclusive and welcoming family it built over eight seasons and two networks. The show may be ending at a time that its parody of cop drama excesses stopped feeling entirely right, but it's tough to let go of a series that's lasted this long and even tougher for fans to say goodbye knowing they've already saved it once.

Still, Goor, Schur and the writers have done a fine job of walking us through the stations of an honorable goodbye leading up to this week's finale. We'll miss the way Jake, Amy, Rosa, Charles, Terry, Holt, those idiots Scully (Joel McKinnon Miller) and Hitchcock (Dirk Blocker), and long-gone snarky administrator Gina Linetti (Chelsea Peretti) created a stable family of choice that brought out the best in each other.

But this final ride along, including "The Set Up," has presented the most persuasive argument that now is the right time for the comedy to bow out honorably.