In its final run, the comedy is aware of its status as copaganda. To its credit, it doesn't try to make light of it 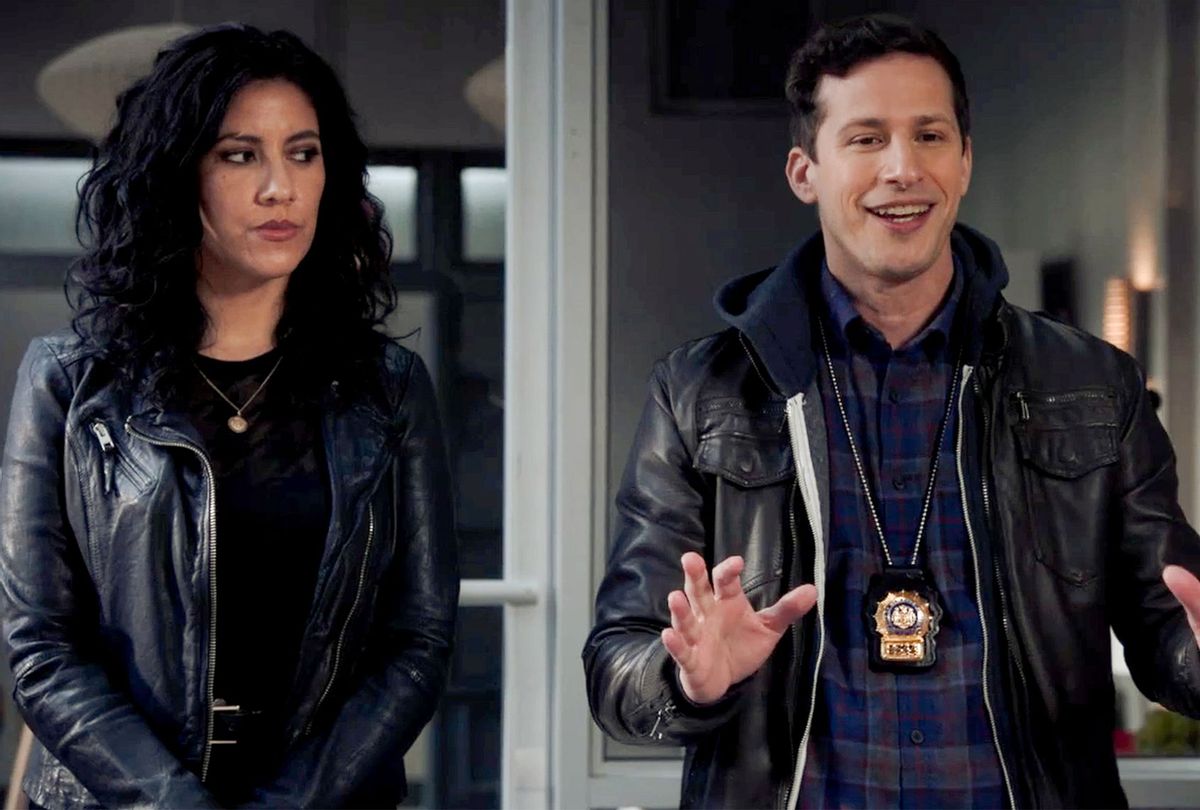 Depression afflicted the world around this time last year. If pandemic quarantines weren't getting to us, the horror of witnessing George Floyd's murder surely did. Hundreds of thousands took to the streets to march for Black lives. Others came out to spark chaos. Suddenly getting out of bed became a Herculean feat.

Little wonder that people sought out comedies to counteract the darkness – however, one show that didn't pop up on many comfort TV lists was "Brooklyn Nine-Nine." It had no place in 2020's feel-good catalogue. It still feels out of place, and the show's co-creators Dan Goor and Michael Schur tacitly acknowledge that with the opening gag in "The Good Ones," the premiere of its eighth and final season.

"Question: What is the number one problem with the coronavirus?" asks Andy Samberg's always upbeat detective Jake Peralta, the Nine-Nine's self-styled hero cop. He's posing the question to fellow investigator Rosa Diaz (Stephanie Beatriz), who annoyedly rattles off a list of sensible answers.

"Mass death? Economic collapse?" she responds, adding, "The way the disease has exposed the systemic injustice at the core of American life?"

"Well, yes, obviously those," Jake says, his chipper tone never flagging. "But after that . . ."

Chalk up "Brooklyn Nine-Nine" return to us at a time of debates about police reforms and defunding – and in an era where new video recordings of police brutality against people of color emerge and circulate on a near daily basis – an unfortunate circumstance as opposed to bad timing.

Everything about the comedy that people loved before is still present: Jake's still too much of a try-hard with bizarre daddy issues he assigns to his boss, Captain Raymond Holt (Andre Braugher). In turn, Captain Holt remains comically unreadable, equally poker-faced in moments of elation, rage and despair. Jake's right hand Charles Boyle (Joe Lo Truglio) still gambols after him like a faithful pup, and Sergeant Terry Jeffords (Terry Crews) hasn't stopped obsessing about his physique or portraying a "suck it up" version of demonstrative masculinity.

But Rosa drops a bomb that marks a distinct beginning to the show's end, which flattens the tone, coloring everything that follows: She and Jake team up on a case that delivers a hard lesson about that systemic injustice to which Rosa refers, presaged in Jake confidently reassuring her with, "You know the system can work sometimes when good people are involved!"

They spend the rest of the episode finding out whether that's true and if so, to what extent.

"Brooklyn Nine-Nine" always led with its kindly nature, exhibited by a crew of understanding good cops dedicated to doing the best by their community.

While the writers never pretended the larger New York Police Department isn't corrupt, the antagonists representing the worst aspects of the force are generally as feckless as the criminals Jake and the gang pursue. John C. McGinley's Frank O'Sullivan is this season's example of that: The head of the patrolman's union and dedicated to covering up officer malfeasance, O'Sullivan comes off as an authoritarian boob with an Oedipus complex, easily defeated by exploiting his soft spot for Billy Joel.

Still, for all of the writers' and cast's earnest attempts to find a way into the show's 10-episode farewell, there's simply no way for the show to avoid the awkwardness surrounding what it signifies.

"Brooklyn Nine-Nine" earned critical praise for building episodes around hot-button cultural issues such as sexism and homophobia while maintaining its comedic integrity. One memorable installment features Terry being harassed by a fellow officer while he's off-duty for simply being Black and looking suspicious. Other episodes peek into Holt's past struggles as a gay Black man rising through the department's ranks.

Such plots enable "Brooklyn Nine-Nine" to critique the way cop dramas unquestioningly lionize men and women in law enforcement. But in the main it functions as a droll workplace sitcom with a low-stakes mystery of the week. It just happens to be set in a jolly version of a workplace whose real-world counterparts engender fear and anger within marginalized communities.

The seventh season ended in April 2020, months before a summer of civil rights protests that spurred debates about the role TV plays in cementing the myth of equally apportioned justice into our consciousness by way of shows like "Law & Order" and "CSI." "Brooklyn Nine-Nine" is a part of those debates as well, like it or not. Its friendly tales of dedicated good cops operating in a sea of bad ones may be consistently heartwarming. It is also textbook copaganda.

Time and again we see proof that the policing structure itself is so broken that officers with the best of intentions – the Jakes, Amys, Charles, Holts and Terrys of the world – can't help but prop up a rotten system.

This was true before cities angrily erupted in reaction to the murders of Floyd, Breonna Taylor and Ahmaud Arbery. What's changed is that now we've seen the real-world impact of the hero cop myth's proliferation on primetime, creating an unassailable defense for the cop characters we love is difficult.

Still – these are lovable characters because of their humanity, and being squeezed through the strainer that was 2020, are changed. Part of what make "Brooklyn Nine-Nine" an ideal workplace portrait is its diverse makeup, including two Black men and a pair of Latinx women who can't help but react to the last 14 months differently from Jake, Charles and resident numbskulls Scully (Joel McKinnon Miller) and Hitchcock (Dirk Blocker).

You may notice that the premiere's title carries a dual meaning. Several characters use the phrase "one of the good ones" to describe the supposed good apples tumbling around in the NYPD barrel. Jake tries to spin it in a positive light only to have the coded language boomerang back on him.

So if his snappy banter falls flat throughout the premiere, that's why. If Charles' exaggerated displays of performative allyship are a tad too much to take, maybe that's the point. They're clueless white guys who aren't quite sure what to do in a world that doesn't reward good guys like the ones they strive to be. They're as aware of their problematic approach to the world as the show's writers prove to be.

Just because an episode of "Brooklyn Nine-Nine" isn't particularly hilarious doesn't mean it isn't good. Everything people still adore about the show remains intact, particularly in a subplot involving Sergeant Amy Santiago (Melissa Fumero) diving into her fear that her strange, geeky chemistry with Holt is off.

Her efforts may be teeing up to something more serious, but getting there is entertaining enough.

It's hard to envy the position in which "Brooklyn Nine-Nine" finds itself. As a cop show it can't ignore what's going on in the real world and in its streets. As a show saved from one network's cancellation by dedicated fans, it's obligated to reward that loyalty with a worthy send-off.

None of the five episodes provided for review contain any reasons for fans to turn it off, I'm happy to report. Indeed, the show incorporates our changed view of policing into a season-long arc involving McGinley while still finding time for farcical misadventures, including a delightful send-off for Craig Robinson's recurring guest character Doug Judy.

Even the cold open with Jake and Rosa culminates in a classic slapstick sequence triggered by a stony-faced Rosa dropping a bomb that changes everything. The decision she makes comes from a place of refusing to be comfortable with the status quo. But it doesn't change how the rest of the crew feels about her – and if anything, it solidifies the reasons we still love the show. It was never about the job; the job was never without its problems. It's about the people, and at the end of the day they still make the case that we can find comfort in hanging out with them for little while longer.