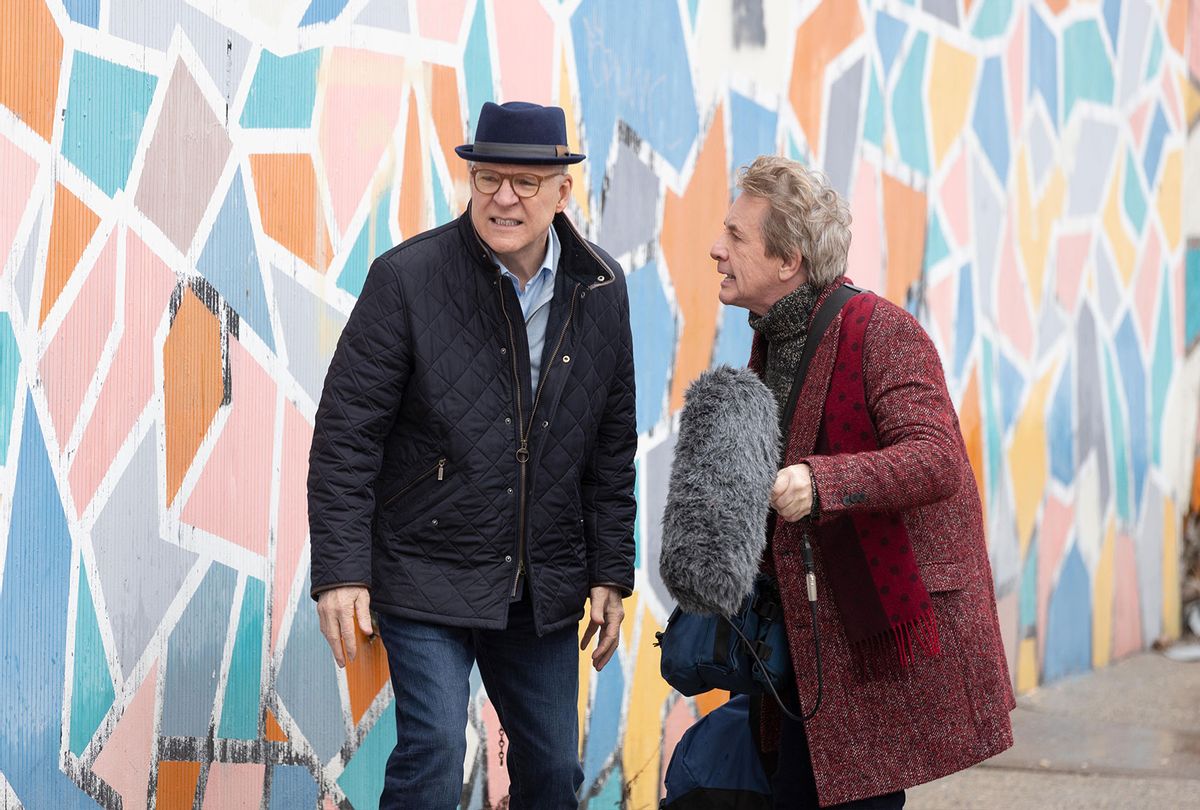 In what feels like a page out of an "Only Murders in the Building" episode, citizen sleuths have mobilized across social media platforms in response to the heartbreaking and mysterious ongoing case of Gabby Petito.

The 22-year-old was reported missing earlier this month after a four-month, cross-country road trip with her boyfriend Brian Laundrie, who returned home to Florida without Petito weeks ago. With Laundrie now missing too, the story has since ignited an explosion of bizarrely excited, true crime-obsessed vloggers and Tik Tokers, who are desperate to beat detectives to the punch — one Twitter thread theory at a time.

The "Only Murders" trio of citizen sleuths

The hyper-engagement and twisted opportunism of these clout-chasing true crime junkies feels eerily resonant with the subject matter and commentary featured in the Hulu murder mystery comedy. "Only Murders in the Building" follows Selena Gomez, Martin Short, and Steve Martin as three nosy neighbors united by their obsession with a true crime podcast. When their neighbor Tim Kono (Julian Cihi) dies under mysterious circumstances, the three are convinced their years of consuming true crime podcasts have made them uniquely qualified to solve their neighbor's case, much to the chagrin of Detective Williams (Da'Vine Joy Randolph).

From the first episode of "Only Murders," Williams is exhausted by the antics of self-appointed citizen sleuths, mobilized by true crime podcasts and convinced they can do the jobs of experts after listening to two episodes of "My Favorite Murder." Her cynicism toward true crime junkies is validated as Mabel (Gomez), Oliver (Short) and Charles (Martin) break laws, tamper with evidence, and cross all kinds of lines to get to the bottom of Kono's death.

"Only Murders" satirizes the opportunism and presumptuousness latent in many true crime content creators and consumers, champing at the bit to make a dime or at least go viral off the worst thing that's ever happened to a young woman's family. From the show's first episodes, Oliver, a struggling Broadway director, is determined to make a podcast out of their late neighbor's death, before they know anything about him, have any suspects, or have even spoken with the young man's family.

At one point in the show's third episode, Putnam compares the process of finding a suspect to their neighbor's murder, to finding a lead in a Broadway production. "I've directed 212 theatrical productions," he says, "and I've always found my lead. It takes a particular eye to know who's got that special star-spark, who's just a background player." To Oliver, the possible killer of a young man in their building is a character to him, and the killing itself but a theatrical production. Oliver takes a heavy hand in branding the podcast, securing a wealthy and mysterious sponsor for it, and even networking with a titan of the true crime podcast industry, played by Tina Fey.

Eventually, Oliver has a change of heart about their podcast when Mabel reveals her close relationship with Kono, and the trauma she endured resulting from the loss of their shared friend years ago. But Oliver's original approach isn't so unlike the clickbait-y Tik Toks or thirsty Twitter threads invoking Petito's name for personal gain, or further obfuscating an already complicated ongoing investigation with ignorant speculation.

In real life, Petito's case has similarly launched an avalanche of almost giddy Tik Tok analysis, with TikTokers like @robandhaley creating and sharing dozens of videos eagerly speculating about Petito's case in the last two weeks, with millions of views, according to the New York Times.

Some Twitter users have put forth extensive theories just based on the different coloring of Petito's hair in recent pictures and videos from shortly before her disappearance. This has caused some amateur detectives to dub themselves Elle Woods, in reference to Reese Witherspoon's iconic character in the 2001 comedy "Legally Blonde," in which a key witness is caught in a lie based on Elle's deep knowledge of haircare.

The obsession with Petito's disappearance has sparked a number of conversations about how we respond to the tragic disappearances and killings of young women. The case exposes how true crime has desensitized many of its fans to horrific violence and instead fostered an eager voyeurism, a phenomenon that "Only Murders" skillfully mocks. A young woman is dead, with unsettling evidence pointing to her boyfriend's possible involvement in her death, and vloggers and social media users are excitedly consuming her story, making "Legally Blonde" jokes as her family mourns.

None of this is to say there's no value in crowdsourcing information about ongoing, mysterious cases, or elevating media attention and awareness. Many true crime junkies clearly have no shortage of time to research or help out, and mass mobilization often churns out at least one or two helpful details, every now and then, as seen in Netflix's true crime documentary, "Don't F**k With Cats," in which cat lovers online unite to catch a killer.

Still, most ordinary citizens simply don't have the resources, clearance, or expertise and detective skills to take up this much space in the investigation. Worse, many of the participants in the social media circus we're witnessing around Petito don't seem as interested in helping her family as they do, in helping themselves and their own social media accounts.

What's striking about the immediate cultural obsession and extensive national media coverage of Petito's case is that it blatantly reflects the centering of whiteness and white narratives in our society. It's a textbook case of what social scientists have long called "Missing White Woman Syndrome," or selective attention paid to missing person cases involving young, white, upper-middle-class women or girls.

In contrast, among the many individuals devoted to Petito's case, you'd be hard pressed to find one person who could name any of the unsaid numbers of missing Indigenous women, or many missing and killed women and girls of color from lower-income backgrounds. Just in Wyoming, the state where Petito may have been killed, 710 Indigenous people who are primarily women and girls are known to be missing. Missing White Woman Syndrome speaks to a double standard in whose lives are valued, and who is deemed relatable and worthy of attention, care, and mobilization for justice in a society and media landscape steeped in whiteness.

Citizen sleuths have chosen to wield this private tragedy as a public opportunity, and their self-serving analysis is often unsurprisingly void of important considerations about power and race — how Missing White Woman Syndrome has erased other victims, and how Laundrie's identity as a white man may have allowed him to evade police action and suspicion, disappearing days ago amid the investigation. There's certainly been little to no conversation about police departments' systemic failures to handle possible domestic abuse cases, perhaps owing to the prevalence of domestic abuse among police officers themselves.

Despite this, Missing White Woman Syndrome often does little to no good for white women themselves, relegating their lives, their pain, their innermost struggles to just another true crime podcast episode for millions to gawk at.

The subject of Oliver, Mabel and Charles' podcast in "Only Murders in the Building" notably isn't a white woman, but a young Asian or mixed race man, and a presumably affluent resident, having grown up in their luxury apartment building. In this way, the series flips the traditional script of the true crime podcast with their mystery subject's identity. As a result, the show might just prompt audiences to question why in real life, we've heard so few podcasts about stories with subjects like Kono, and instead heard so many about white, female subjects like Petito.

Since Petito's case first drew widespread media attention earlier this month, Laundrie has gone missing, shortly after being named a person of interest. Petito's family has very publicly demanded that Laundrie's family cooperate with the ongoing police investigation. Then, on Sunday evening, the FBI announced it had found human remains in Wyoming's Bridger-Teton National Forest consistent with descriptions of Petito. The following day, ABC7 reported police had searched Laundrie's home, and seized his car and other evidence, all while he remains missing.

The case continues to develop at a rapid rate, with new developments announced on what feels like an hourly basis. As the "Only Murders" gang quickly discovers amid their fictionalized, on-screen sleuthing, their mystery subject had friends, family, loved ones struggling to process his death. This realization of the humanity at the heart of their investigation prompts them to slow their roll — and we can only hope the TikTok detectives of real life will eventually take a similar cue.