Hillary Clinton tried to warn us — and paid the price. Let's at least call Republicans what they are

Still, America's political class is unwilling to call the fascist, white supremacist Republicans what they are 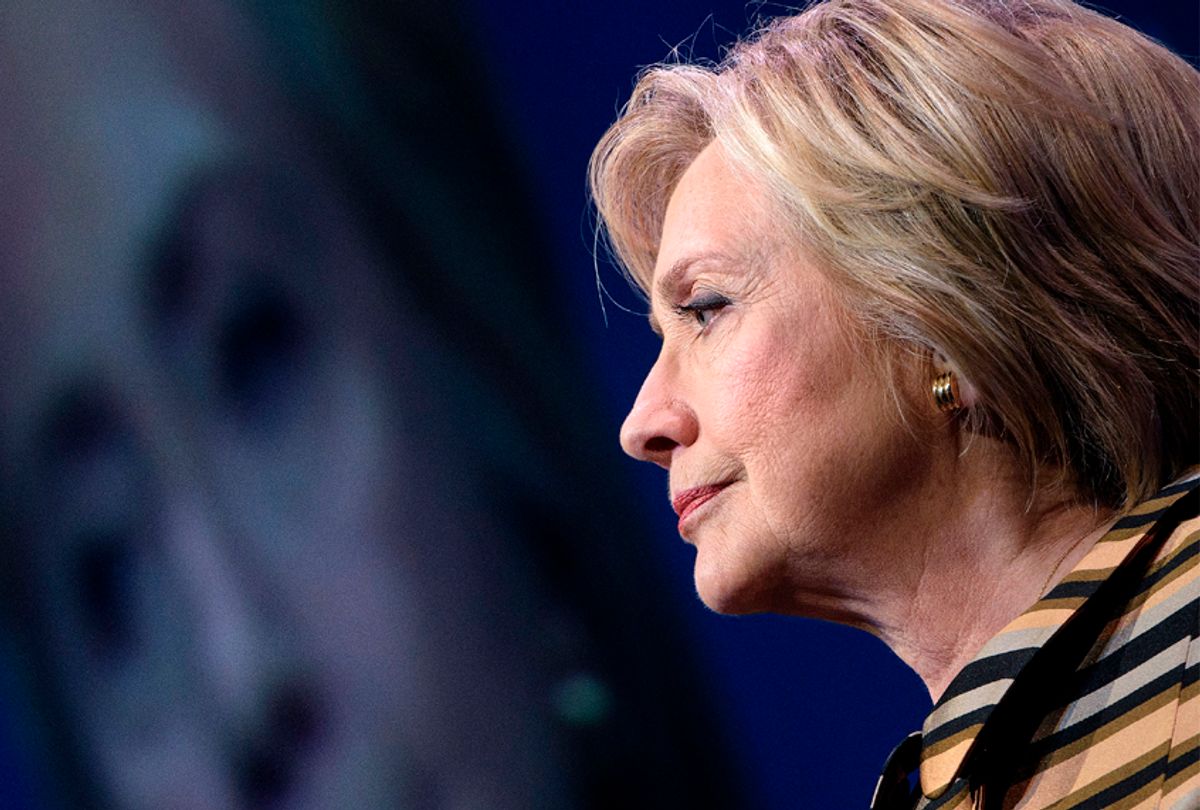 During a speech in September 2016, Hillary Clinton — then the Democratic presidential nominee — warned the American people and the world of the dangers represented by Donald Trump and his followers. She described the "volatile political environment" of that moment:

You know, to just be grossly generalistic, you could put half of Trump's supporters into what I call the basket of deplorables. Right? The racist, sexist, homophobic, xenophobic, Islamophobic — you name it. And unfortunately there are people like that. And he has lifted them up. He has given voice to their websites that used to only have 11,000 people, now have 11 million. He tweets and retweets offensive, hateful, mean-spirited rhetoric. Now some of those folks, they are irredeemable, but thankfully they are not America.

In many ways, Clinton was too kind. If anything, she underestimated how many Americans were in fact committed and enthusiastic human deplorables.

After that speech, Clinton was pilloried by the mainstream news media, some leading Democrats, and of course the Republican Party and right-wing propaganda hate machine. Clinton's characterization of Trump's "basket of deplorables" was described as insensitive and unfair to the "white working class" Americans that elites and out-of-touch Democrats had too often ignored.

That reaction to Clinton's truth-telling helped to legitimate Trumpism and American neofascism (operating under the mask of "populism") as something that was reasonable and understandable, rather than as a manifestation of racial resentment, a racist temper tantrum and a declaration of white supremacy. This reflected our society's deep investment in a narrative of white racial innocence. In that logic, America is a great and exceptional country, and by implication, this is especially true of white people — especially those "real Americans" whose supposed patriotism and presumed Christian values render them a bit more American than anyone else.

Many members of the news media likely agreed with Clinton's warnings in private, but the institution as a whole had been beaten into submission by Republican fictions about so-called liberal bias. So it was that Clinton's warning about Trump and his "deplorables" — and their embrace of fascism — was deemed to be outside the limits of approved public discourse.

If Clinton's warnings had been heeded in 2016, we might be living in a quite different country today. America would not necessarily be drowning under a fascist tide which has imperiled our democracy and our future. Had Hillary Clinton been elected president, it's also likely that far fewer Americans would have been killed by the coronavirus pandemic, and the nation's economy might not have been pushed to the edge of a second Great Depression.

Matters are now so dire that it is now not a question of whether American democracy will succumb to a nightmare reign of full-on fascism but rather when that will happen. If America's neofascist movement continues to gain momentum, Joe Biden will be relegated to the role of a speed bump or an asterisk in American history.

In the five years since the 2016 election, Hillary Clinton has continued her efforts to rally America's pro-democracy forces against the right-wing and its fascist assaults. Last Tuesday, during a Guardian Live interview, she continued her warnings. The Guardian summarized her interview:

Hillary Clinton has said that the US was still in a "real battle for our democracy" against pro-Trump forces on the far right, seeking to entrench minority rule and turn back the clock on women's rights. ... Clinton fended off suggestions that the world was now witnessing the twilight of US democracy, but said: "I do believe we are in a struggle for the future of our country"…

"The January 6 insurrection at our capitol was a terrorist attack," Clinton added, noting the parallel with the 9/11 attacks. ... Clinton was also asked about the abortion ban passed in Texas at the beginning of this month, reversing gains for women's rights won a generation ago.

"So you ask if I'm surprised or discouraged. I'm neither. I'm not surprised because I've been involved in the women's movement, the civil rights movement," she said. "I've seen the forces that are arrayed against progress when it comes to women's autonomy, when it comes to the advancement of civil and political and economic rights. I know very well that the other side never gives up.

"They are relentless in their view of what is a properly constructed society, and in that view, white men are at the very top and nobody else is even close."

Clinton's observations are once again correct. Unfortunately, her recent comments also reveal how many other members of the American political class have failed to accurately describe the Republican Party and the neofascist movement.

Today's Republican Party is in fact a right-wing extremist organization, and fascist in all but name. Its followers and voters embrace and act upon those values and beliefs. To claim that there is some other Republican Party, somehow separate and distinct from right-wing extremism — as too many commentators and political observers do — is to assert a difference that does not substantively exist. Ultimately, Hillary Clinton's Guardian interview makes clear that she too fails to consistently and accurately describe the party that she warned us about five years ago.

Why does this error keep recurring? The American political class is emotionally, psychologically and professionally invested in the idea of "normal politics," and a belief that our system and its governing institutions will survive all possible challenges.

That is an illusion. The Age of Trump and the ascendance of American neofascism represents the old order being cast aside and replaced by something different — in this case, something dreadful. Hillary Clinton and so many other American political insiders are deeply invested in the familiar, nostalgia-colored mores of American politics. To acknowledge the existential threat of the Jim Crow Republicans and the Trumpist movement is too traumatic and terrifying for the political class to properly contemplate. Indifference, fantasy  and soothing lies about how everything will inevitably be OK in America appear to offer a much easier path than doing the difficult and dangerous work required to save American democracy.

The slippage of language and its attempt to normalize the American fascist movement and Republican Party's assaults on democracy will soon lead to ridiculous claims by the American commentariat and larger political class — if this hasn't happened already — about a distinction between violent fascists and extremists and those who wear nice suits and prefer to operate without bloodshed. We can negotiate with the "reasonable" fascists, we will surely be told, in the interests of "consensus" and "bipartisanship."

But in fact, words have actual meanings. Fascism cannot be separated from violence, and it is incoherent beyond its fantasies of dominance and power and its desire to vanquish democracy and the truth. In the final analysis, there is no way to negotiate with fascists, because for them victory is all that matters. Reasonable compromise with such a force in a liberal democratic society is impossible, and any quest for it amounts to surrender.

America's political elites remain deeply and compulsively attached to the dream, hope and delusion that "traditional" Republicans will soon salvage the Republican Party and make it respectable and honorable again. In fact, the Republican Party's "honorable" past is greatly exaggerated. Supposedly "reasonable" Republicans may have backed away from Donald Trump's most egregious efforts to overturn the 2020 election, but they supported almost all of his policy goals.They were fully complicit, in other words, with his personal and political evil and destruction.

Donald Trump and his followers are now purging those remaining Republican politicians who are deemed to be traitors or otherwise disloyal to the movement.

While some establishment Democrats, such as President Biden, cling to outmoded notions of bipartisan compromise, numerous prominent former Republicans — including Tom Nichols, Steve Schmidt, Richard Painter and Max Boot — have warned that their onetime political home cannot be salvaged and must be burned down or completely rebuilt if American democracy is to be saved. These former Republicans are experts on the monster they helped to birth and sustain.

Political scientists and other researchers have repeatedly documented the decades-long drift from a median point of consensus, where there was considerable overlap between more liberal Republicans and more conservative Democrats on basic questions of public policy, to the present, when the Republican Party is far outside the mainstream of American politics.

Today's Republican Party has more in common with neofascist political parties in Hungary, Poland, Turkey or Brazil than it does with mainstream democratic parties in advanced Western democracies. Public opinion polls and other research have also made clear that the Trump-controlled Republican Party is a personality cult. Its leaders and followers now embrace terrorism and other forms of political violence, as shown by their response to the events of Jan. 6 and Trump's attempted coup.

Other research has shown that white supremacist views are the most important predictor of support for Trump and the Republicans, and that ordinary Republican voters have been almost fully propagandized into believing Trump's Big Lie about the 2020 election — and the many little lies that support it.

In her seminal 1951 book "The Origins of Totalitarianism", Hannah Arendt offered the following description of how fascist-totalitarian movements such as Hitler's Nazi Party were organized:

All the extraordinarily manifold parts of the movement: the front organizations, the various professional societies, the party-membership, the party hierarchy, the elite formations and police groups, are related in such a way that each forms the facade in one direction and the center in the other, that is, plays the role of normal outside world for one layer and the role of radical extremism for another….

The great advantage of this system is that the movement provides for each of its layers, even under conditions of totalitarian rule, the fiction of a normal world along with a consciousness of being different from and more radical than it. Thus, the sympathizers of the front organizations, whose convictions differ only in intensity from those of the party membership, surround the whole movement and provide a deceptive facade of normality to the outside world because of their lack of fanaticism and extremism while, at the same time, they represent the normal world to the totalitarian movement whose members come to believe that their convictions differ only in degree from those of other people, so that they need never be aware of the abyss which separates their own world from that which actually surrounds it. The onion structure makes the system organizationally shock-proof against the factuality of the real world.

Arendt's description is a perfect fit for today's Republican Party and neofascist movement. It is past time for America's political class and the Fourth Estate, which claims to be a defender of American democracy, to use more accurate language and call this moment and movement what it is. To avoid doing that, out of some misguided impulse toward civility, is to do the work of aiding and abetting the fascist attack on American democracy and society.

Today's Republican Party is using fascism to create a new 21st century American apartheid. With all due respect to Hillary Clinton, who tried to warn us, we must not mince words. Let us call such an abomination what it truly is.