Vallery Lomas's hushpuppies will cure your fear of frying

An easy, crunchy side dish you can make in minutes 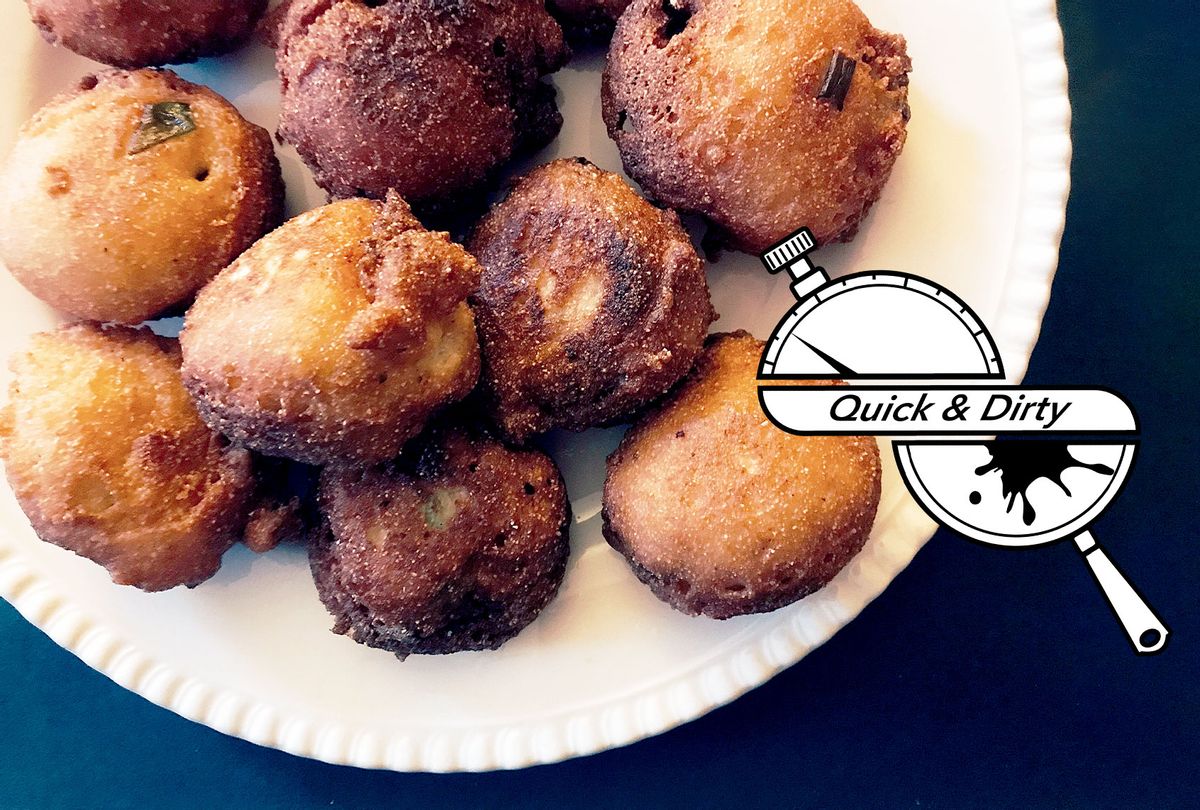 The greatest trick the devil ever pulled was making us afraid to fry at home.

Fried chicken from a chicken shack is an exquisite treat. Fresh french fries, served beside a burger, are inevitable. Donuts? Come on. But those are all somehow regarded as foods that happen outside one's own kitchen. Heating up a big bucket of oil and dropping stuff into it oneself seems intimidating, not to mention messy.

But you already know that fried stuff is delicious. What if I told you it was also pretty easy? There is so much to adore about Foodie in New York Vallery Lomas's debut cookbook "Life Is What You Bake It" that it would be impossible to pick just one great recipe or story. But the fact that she devotes an entire chapter to approachable, enticing "Doughnuts and Other Fried Things" is right up there on the list of the book's charms.

When she competed on — and won —  "The Great American Baking Show" in 2017, her season was abruptly scrapped because of sexual harassment allegations against one of its judges. Her groundbreaking victory never aired. In her book, Lomas describes the experience in the baking terms of being "punched down and rising again." She carried on, leaving her career as an attorney for her first love. "Life Is What You Bake It" is a culinary homage to her Louisiana roots, her time in Los Angeles, London, Paris and New York. It's clafoutis, bagels and banoffee, and the unapologetically deep fried southern delights of beignets and hushpuppies.

In conversation, Lomas is as sunny as the things she bakes. "Oh my gosh, talk about hitting the spot!" she says with a laugh, describing her crisp recipe that has the added bonus that "You don't have to fuss around with pie crust." Because Lomas wants to encourage bakers of all skill levels,  she mixes her more complicated recipes with decadent, easy dishes like twice baked almond croissants made from bakery pastries, "for the people who really are like, 'I am afraid to bake.'" And for those really afraid to fry, there are hushpuppies.

Golden, crunchy cornmeal hushpuppies are so unexpected for a home cooked dinner, they're an instant home run. When I made them recently to serve with a pork tenderloin, my family gobbled the entire plate like they feared they'd never eat them again. Don't worry, folks, you will. "Those are actually wonderfully quick to make," says Lomas. "I know there's a whole lot of hesitancy with frying. But they're really easy to make, and you literally just carefully drop them in oil." They're also as close as a few staples you probably already have on hand.

I've tweaked Lomas's recipe ever so slightly here to minimize the ingredients. I've also cut the quantities in half, so you can get everything fried in two batches, eat delicious hushpuppies with dinner and not be burdened with leftovers. If you somehow inexplicably do have any left, just reheat in the oven to crisp up. Double the quantities if you're cooking for a bigger group.

Inspired by Vallery Lomas's "Life Is What You Bake It: Recipes, Stories, and Inspiration to Bake Your Way to the Top: A Baking Book"

Makes about a dozen hushpuppies

Serve with hot sauce, spicy mayo, or butter. These are traditionally served with fried fish, but there is nothing they're not good with.