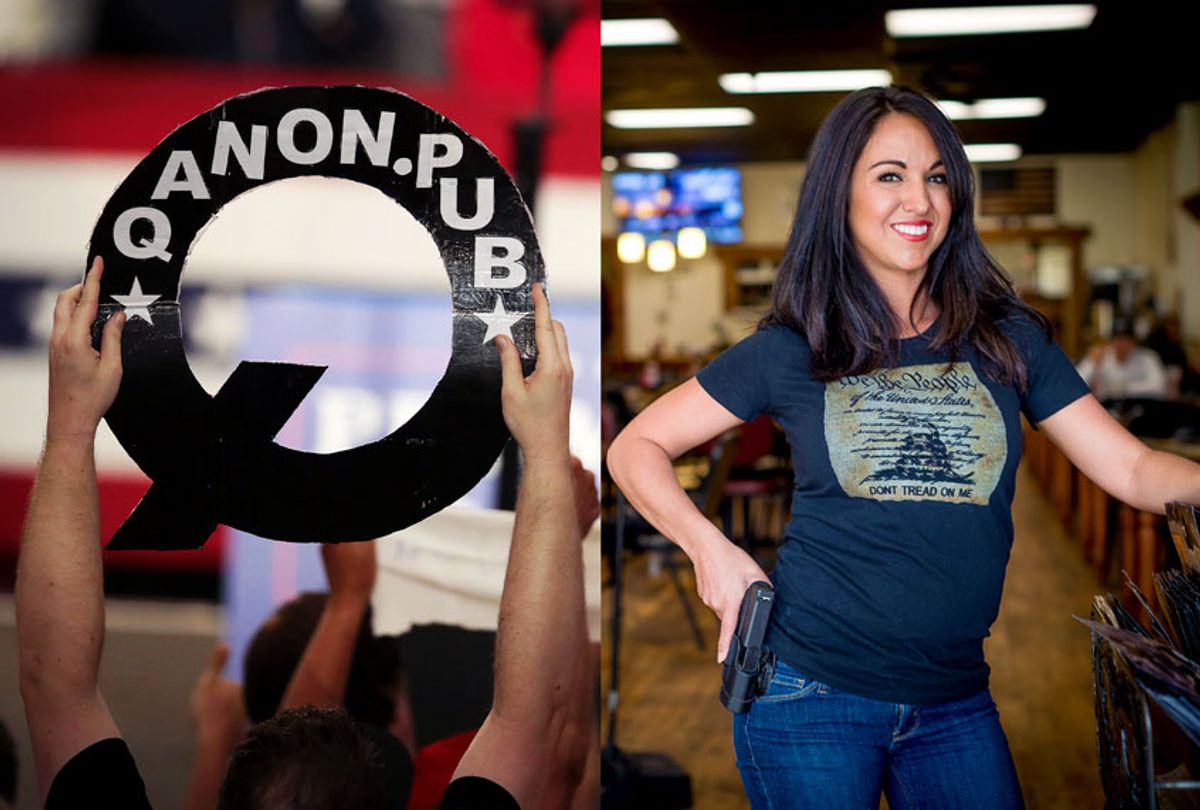 In public, Rep. Lauren Boebert has attempted to distance herself from the far-right QAnon conspiracy theory, at least since she entered politics. Yet, she has personally hired QAnon adherents to manage her restaurant and work in her Colorado campaign office.

In November 2020, just after Boebert was elected to Congress, QAnon follower Mona Demicell shared on Facebook that she and her husband Bud, a fellow QAnon adherent, were moving to Rifle, Colorado, to work for the incoming congresswoman. Bud Demicell is now the general manager of Shooters Grill, while Mona does accounting for the restaurant and also works in Boebert's campaign office next door.

According to Mona's Facebook post on Nov. 13, 2020, Bud was due to arrive in Rifle from the couple's hometown of Pueblo, Colorado, on Nov. 21 — a distance of nearly 300 miles — and would be "couch surfing" until Mona and their son arrived in the area. Less than a week later, Shooters Grill updated its Facebook profile picture with a staff photo that included Bud Demicell (back row, left) as well as Boebert's mother, Shawna Bentz. A few months later, the Demicells began renting a home in Rifle that was listed for $1,750 per month.

Both Bud and Mona Demicell have posted on social media numerous times in support of QAnon, and have reposted conspiracy-laden messages from self-appointed "master Q comms decoder" David Reinert. For example, one Reinert post later reposted by Bud, who now runs Shooters Grill, featured 27 images that attempted to tie Donald Trump's social media posts together into a meaningful narrative, or what Reinert calls a "marker."

"Possibly the biggest post to date," it read. "Go slow. Follow the trail. The last BOOM will be Magical. MARKER."

That very same month, Bud reposted another of Reinert's messages, which read as follows:

When did they start?

What is the plan?

Can you hear me now?

INFILTRATION instead of INVASION.

Who is Barack Hussein Obama…Really?

The people "hero worshipping Obama are going to be in for the shock of their lives.

That is if they're able to break their programming.

Travis View, a QAnon researcher and co-host of the "QAnon Anonymous" podcast, said that Boebert has carefully avoided embracing the conspiracy theory too obviously.

"Lauren Boebert has always tried to maintain some distance between herself and QAnon," View told Salon. "For example, in July of 2020, she tweeted that 'QAnon = fake news' and that she's 'not a follower.' However, as evidenced by her willingness to appear on a QAnon show, her statement that she 'hopes' Q is real and her closely associating with QAnon followers, she at very least appears to be cozy with the QAnon community."

Boebert didn't respond to a Salon request for comment on this story.

In July 2020, Bud Demicell attended a protest at the Christopher Columbus statue in Pueblo along with several Proud Boys and the FBI-listed "outlaw" motorcycle gang, Sons of Silence. That protest turned violent and Demicell allegedly "put a revolver" to the stomach of an "antifascist" activist.

Now Bud Demicell is running for Rifle City Council. His campaign website boasts that his "vast business management and financial experience, and his strong leadership skills make him the optimum candidate for Rifle City Council." In 2018, the Demicells discharged almost $60,000 in debts through a Chapter 7 bankruptcy proceeding.

According to a 2016 filing, Bud Demicell was an assistant manager at a Walgreens store in Pueblo, earning $20,000 a year, while Mona Demicell was unemployed and receiving $16,000 in disability. Additional FEC filings show Mona as disabled. According to Boebert's recent financial disclosure, Shooters Grill lost $226,234 in 2020 and $143,233 the prior year, raising the question of how she manages to keep her employees on the payroll.

Mona, who now works both at Shooters and in Boebert's campaign office, was thanked by name by Boebert in a November 2020 press release for "organizing, calling voters, distributing yard signs, attending rallies and volunteering to do all that made this a true grassroots campaign. I can never thank them enough for all they did to support my campaign, but I'll sure try. Thank you!"

In the months and years leading up to that, Mona repeatedly expressed her enthusiasm for the QAnon conspiracy theory, which falsely alleges that Democrats and prominent liberal celebrities are running a secret child sex trafficking ring. In July of 2020, she tweeted a reply to Michael Flynn and Sidney Powell, "#wwg1wga #TheBestIsYetToCome #LaurenForColorado." A month later, Mona simply posted a large Q logo and in May of 2020, she tweeted, "Welcome to the 'alt-right, nut-job, conspiracy group'!! You're in excellent company! #wwg1wga." (That abbreviation stands for the QAnon slogan, "Where we go one, we go all.")

In August of 2019, Mona posted a large QAnon logo to Facebook along with the caption, "Let's take notice of our fellow Patriots! Let's get the Q memes going and shout-outs where yall are from! Get some popcorn and enjoy the show! God bless! And remember...! WWG1WGA!!!"

Also, in August of 2019, Mona replied on Facebook to a post about the QAnon Code of Ethics. "I barely go [sic] the very general basics before Polis petition hit. Now I can't keep up with it! Sept 6th — back to Q." Mona has also posted memes relating to the right-wing militia group known as Three Percenters, along with other QAnon related content.

A month earlier, Mona posted a tweet from the user @StormIsUponUs (a QAnon reference) to her Facebook page with the hashtag "WWG1WGA." That specific post, reflecting a reality-proof immersion in the QAnon worldview, reads: "These blackouts in major cities are likely white hat EMP attacks to disable the security measures of hidden enemy facilities as part of ongoing raids by federal law enforcement in the wake of Epstein's arrest. We have never seen anything like this. #TheStormIsHere."

In May 2020, Boebert told a right-wing podcast, "Everything that I've heard of Q, I hope that this is real. Because it only means that America is getting stronger and better, and people are returning to conservative values." In that interview, Boebert attributed her knowledge of QAnon to her mother, but in an October 2020 interview with FOX21, she denied that she or her mother were QAnon followers. "I'm not a follower of QAnon," she said. "My mom is not a supporter of QAnon, she just talked to me about it one time."

In June this year, Mona Demicell replied to a post on Facebook by saying, "Love our Lauren Boebert and her sweet momma, Shawn Bentz!!"