Marco Rubio wants to go after corporations — but there's a catch

"It makes no sense" 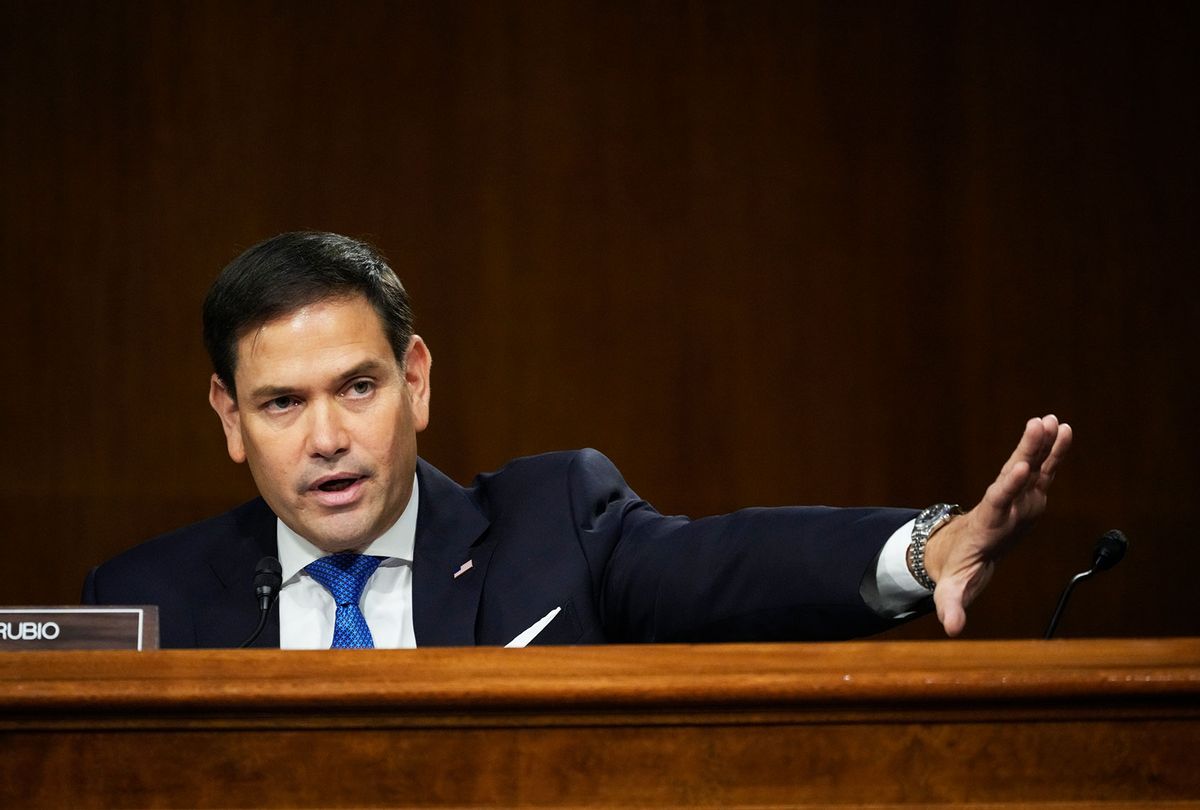 Marco Rubio is trying to get ahead of the Republican pack, unveiling a legislative offensive against the left's so-called "woke" agenda, introducing a bill that would incentivize shareholders of large public companies to sue company directors who engage in "wokeness."

The 21-page bill, dubbed the "Mind Your Own Business Act," federally prohibits corporate executives from making "non-pecuniary" decisions to promote the company's "public image" or "employee morale," creating a cause of action for shareholders aggrieved by a company's interest in "wokeness" over profit-maximization. Shifting the burden of proof onto executives, the measure would "require corporate directors to prove their 'woke' corporate actions were in their shareholders' best interest."

Rubio's bill rattles off several examples of how executives have apparently allowed "political bias" to undermine their fiduciary responsibility to shareholders. It implies that businesses have in the past denied goods and services to particular states and industries, promoted race and sex stereotyping, and used board and members to advance political agendas.

"No more legal tricks that shield these corporate executives from accountability," Rubio announced in a press release. "If they really believe that being woke is good for business, they should have to say so – and prove it – under oath in court."

But critics say that the bill's nebulous nature casts endless doubt over how it would actually be implemented, with some even arguing it applies the very kind of big government approach to big business that Republicans typically detest.

"It makes no sense," said Richard Painter, chief White House ethics lawyer for President George W. Bush. "Corporations don't have to maximize profits," he told Salon in an interview. "It's a complete fallacy that directors have to maximize profits. They can focus on the interests of labor, the environment, and a range of concerns."

"​What if business firms don't think "profit maximization" is the most important thing?" echoed Lawrence B. Glickman, a professor in American Studies at Cornell University, over email. "What if they believe that investments in the future—and thus lower or no dividends to shareholders—are more important? And what about their duties to their employees?"

At present, there is no provision in federal corporate law that mandates corporations to maximize their profits or returns to shareholders – a fact recently affirmed by the Supreme Court's 2014 decision in Burwell v. Hobby Lobby Stores, Inc. "Modern corporate law does not require for-profit corporations to pursue profit at the expense of everything else, and many do not," the court wrote. To boot, neither state codes nor corporate case law have ever set a clear precedent for such a requirement. In fact, both confer broad discretion to executives when it comes to ensuring corporate welfare.

When shareholders sue company directors for breaching their fiduciary responsibility (i.e. derivative suits), they again do so under the jurisdiction of state laws. But Rubio is pushing for the "federalization of corporate law," Painter said – and that's an approach Republicans would normally decry as fascist or anti-capitalist.

Such Republican rhetoric has been common in the past decade, with politicians like Rubio repeatedly emphasizing the apparent need to protect state rights' from federal overreach, particularly when it comes to social issues.

Back in 2015, just months before the Supreme Court legalized same-sex marriage, Rubio argued that same-sex marriage should be individually resolved on a state-by-state basis, saying in a CBS interview: "States have always regulated marriage. And if a state wants to have a different definition, you should petition the state legislature and have a political debate. I don't think courts should be making that decision."

This year, Rubio again alluded to states' rights in his opposition to the John Lewis Act, a Democratic-backed voting rights overhaul. "Democrats want unaccountable bureaucrats in Washington to run our elections in Florida," he said in a June press release. "Not only is that unconstitutional, it is reckless."

Other critics of Rubio's bill have claimed that it would be shut down by existing legal precedents.

In fact, a doctrine already exists to prevent aggrieved shareholders from filing the kind of frivolous suits that would arise from Rubio's bill, argued UCLA law professor Stephen Bainbridge. "At present," he wrote on his blog, "the sort of woke decisions … almost certainly would be insulated from judicial review by the business judgment rule." This rule makes the presumption that business directors are serving the interests of their corporations, placing burden of proof to on plaintiffs to argue otherwise. But Rubio's measure fails to make explicit mention of this doctrine, posing questions around how the two would be compatible.

Rubio's "Mind Your Own Business Act" comes amid a broader GOP effort to offload the responsibility of law-and-order onto Republican voters.

Last month, Texas enacted a near-total abortion ban that incentivizes its residents to sue anyone who aids, provides, or receives an abortion after six weeks into pregnancy. The measure effectively puts a $10,000 minimum bounty on wrongdoers, allowing plaintiffs to collect tens of thousands of dollars in compensation. In the lead-up to both the 2016 and 2020 elections, Donald Trump similarly encouraged his supporters to engage in illegal poll watching over baseless fears around voter fraud. Voting rights advocates widely condemned Trump's rhetoric as an intimidation tactic that might lead to voter suppression.

In some cases, Trump has overtly promoted vigilante violence, Salon's Heather Digby Parton noted last month. Ahead of a 2017 rally, Trump promised his supporters that he'll "pay the legal fees" if they "knock the crap" out any protesters at the event. That same year, the former president claimed that there were "very fine people on both sides" of Charlottesville, Virginia's "Unite the Right" rally, which drew hundreds of neo-Nazis and counter-protesters together in a violent clash.

The GOP's deputization of its own voters can be traced back to America's brutal treatment of racial minorities, Glickman said. "I think this is part of a long tradition of the sanctioning of extralegal violence—you can go back to the Fugitive Slave Act, the KKK and other vigilantes during Reconstruction, and lynching."

In 1850, Congress passed a second version of the Fugitive Slave Act, which allowed slave-owners to contract private bounty-hunters to recover enslaved people who had escaped into free states. The law also punished anyone who aided or abetted in the escape of fugitive enslaved people with a six-month prison sentence and a fine of $1,000 (roughly $35,000 in 2021). Slave-owners were known to publish reward offers in newspapers for runaway enslaved people.

During the Jim Crow era, Stefanie Lindquist wrote in the The Conversation, the country saw a privatization of the electoral system that was again weaponized against Black Americans. For example, from 1889 to 1953, Lindquist wrote, the Jaybird Association, an all-White Democratic political organization, single-handedly ran its own "pre-primary" to vet party candidates for office. The effort was designed to combat the biracial coalition of former Republicans that had maintained control of the county government since 1869.

Rubio's law also comes amid an apparent growing rift between the GOP and corporate America.

Back in April, big businesses like Coca-Cola and Delta backed away from Georgia's GOP-backed restrictive voting bill in response to progressive outrage over the bill's potential to suppress minority voters, even though these very companies had donated to the measure's sponsors. The move earned corporate America harsh criticism from the GOP, which accused it of falling into hands of "woke" left operatives. In the aftermath of the fatal January 6 Capitol riot, a number of corporations similarly promised to suspend donations to the 147 Republicans who voted to nullify President Biden's 2020 election win. However, many of these pledges were summarily jettisoned, according to The Los Angeles Times, which found that companies like Cigna, AT&T and Intel broke their promise many months later.

But Painter, Bush's chief White House ethics lawyer, told Salon that it's in Corporate America's best to dispense with the Republican Party.

"This thing keeps accelerating, but this can move toward authoritarianism, where corporations are used – with their money and so forth – to install authoritarians to power," he said. "An awful lot of businesses supported the Republican Party enough in 2016. They didn't like Trump, but they helped Trump get in through contributions made to the Republican Party, because they didn't like the Democrats."

Commentators on both the left and right have expressed extreme doubt over the "Mind Your Own Business" Act's potential passage. Matt Stoller, Director of Research at the American Economic Liberties Project, told Salon that the measure is "not going to pass and it would likely be unconstitutional."