Eichner is a delight, and Drudge all but pioneered digital media — what could be more interesting to watch? 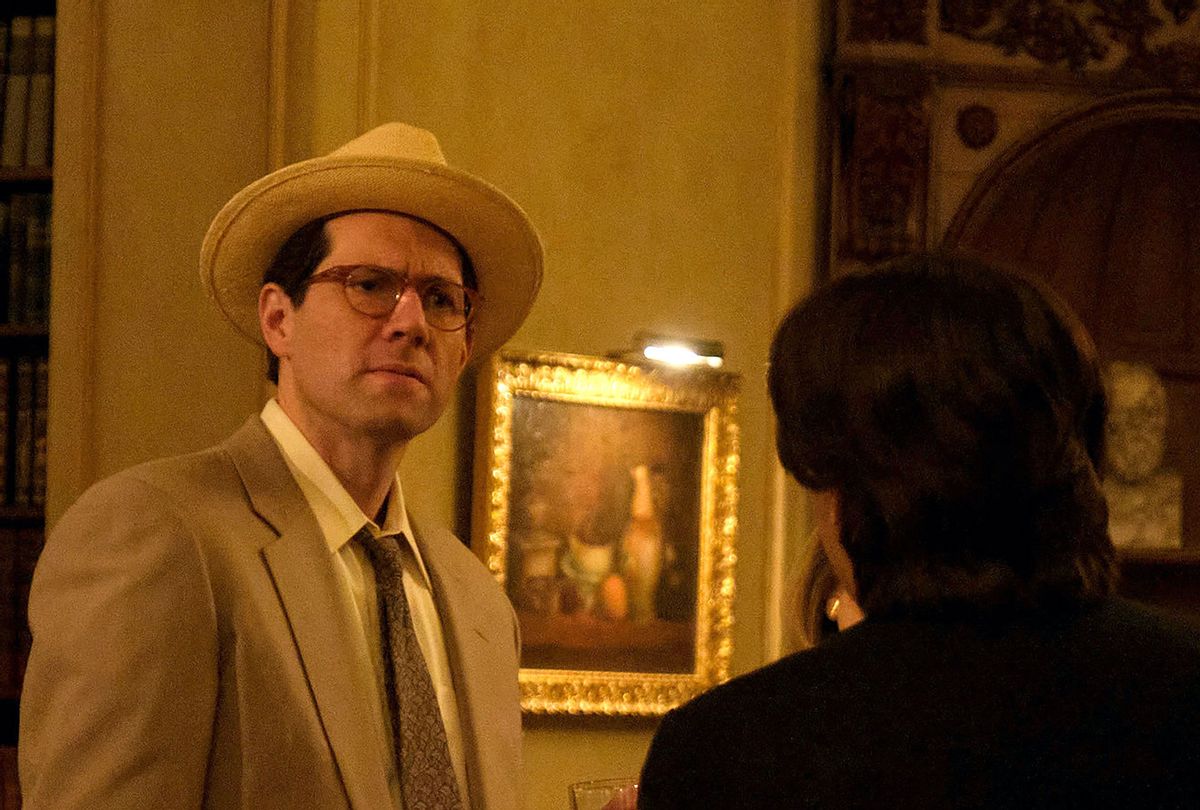 In the third episode of FX's "Impeachment: American Crime Story," we meet Billy Eichner's Matt Drudge as he gives a sanctimonious lecture to tourists in Washington, DC's CBS gift shop about the all-time greats of journalism.

"Picture jazz-age New York, a reporter in a trench coat and snap-rim fedora, ready with a wisecrack and a hot tip on the mob, plus some broadway buzz, oh, and some dirt on the Roosevelts too," Drudge theatrically tells a student visitor in the shop. "That's Walter Winchell, he did it all — with panache. The best that ever lived."

"I just need a poster for class," the student replies disinterestedly, in one of the dark crime drama's rare moments of comic relief.

Drudge's character is one of many iconic political and media figures introduced in the drama as it breathes new life into the interwoven stories of Monica Lewinsky and Linda Tripp, the women who lay at the heart of the scandalous 1998 impeachment of Bill Clinton that shocked the world.

Drudge is, at this stage in 1997, a reclusive political gossip blogger who goes dumpster diving for CBS secrets to air out on the rapidly growing Drudge Report by night, and manages a gift shop by day.

Beyond the comedic beats of the cold open, however, our glimpses into Drudge's life and character have been limited so far. But with the rather minimal scenes in which Eichner features, he's managed to steal the show, leaving audiences hungry for more insight into Drudge's role in eventually propelling Lewinsky's story into the public — and certainly more of Eichner's masterful impressions.

After all, Clinton is known as the first "internet president" for a reason, and Drudge and his website played a key role in popularizing the internet for news and blogging under Clinton's presidency — arguably preparing us for the Twitterverse of today. Even before Drudge reported the news that broke the internet and cruelly helped make Lewinsky a household name against her will in 1998, he had mastered the art of clickbait, predating the existence of most blogs and social platforms.

Drudge had achieved this feat by breaching the inner circles of elite conservative media and political figures, despite lacking a background in journalism or politics. With these inside scoops, and flashy, urgent headlines splashed across his web page, the Drudge Report showed Americans the power and accessibility of the internet age, pulling back the curtain on the most salacious and exclusive political scandals and gossip du jour.

With Drudge's eventual breaking of the Lewinsky story to the world, a development "Impeachment" has yet to reach in its drawn-out timeline, Drudge all but pioneered the beginning of digital media — and digital media consumption — as we now know it.

At different points in "Impeachment" so far, we've gotten glimpses into Drudge's growing power, and at times underhanded approaches. We've also been treated to plenty of comedic relief through him, too, thanks to Eichner, a comedian by training, as he paws through garbage for CBS-related scoops, and works his dial-up internet to share his findings on his blog — all while donning a fedora.

Later, we watch as Eichner's Drudge networks with conservative firebrands at a dinner party at Laura Ingraham's home, still crowned by a fedora. Among these firebrands are Ann Coulter (Cobie Smulders) and George Conway (George Salazar), two lawyers propelling the Paula Jones harassment lawsuit against Clinton forward from the shadows. Ingraham makes the introduction between Drudge, Coulter and Conway, who are familiar with and excited by his work, although Coulter expresses confusion about whether Drudge's hat is being worn ironically.

Hat-shaming aside, they're impressed by Drudge's blog, with good reason. "You know how many people read the holy goddamn New York Times? A million," Drudge tells them. "At the rate I'm going, I'll blow by that next year. Print is dead!"

Drudge winds up wielding these connections from Ingraham's party to break the story that Kathleen Willey (Elizabeth Reaser), a White House staffer, is accusing Bill Clinton of groping her — beating a Newsweek journalist who accuses Drudge of being nothing but a "gossip" to the story he's been following for weeks.

In "Impeachment," Eichner has brought Drudge's mysterious politics and private, quietly sinister energy to life with the actor's characteristic color and humor. Drudge's story on the show has primarily served as a background one thus far. But considering his historical role in the events to come, including being the first to break Clinton's affair with Lewinsky and puttin her name out into the world, "Impeachment" would be almost inconclusive without circling back to Drudge, and his pronounced role in helping to drive the sexist media circus of 1998.

Drudge's long-term political influence aside, Eichner's charming performance of him alone — as somehow both reclusive and desperate for attention and relevance — is enough reason to yearn for more screen time for this particular gift-shop-manager-slash-wannabe-investigative-reporter and fedora enthusiast. Eichner almost visibly enjoys playing Drudge as much as we enjoy watching him, and he's even recounted to New York Magazine in a recent interview that he related to Drudge as two "gay boys who grew up on the East Coast," and spent the '90s hitting refresh on the Drudge Report web page.

But the ultimate appeal of watching Eichner's Drudge is the light he shines on a man who shrouds himself in mystery to this day. Drudge has never revealed how he received the intel he reported on the Lewinsky affair, or a number of other key scoops. Meanwhile, his politics continue to perplex many, as the rabidly anti-Clinton, conservative media darling at one point seemed to support Trump, only to decisively turn against him.

The dramatized version of Drudge that we see on "Impeachment" might just be one of the most revealing and evocative glimpses into his life, and his era-defining work, that we've ever seen, or possibly ever will see, given his well-known, private nature. Drudge is the man who almost single-handedly sparked the advent of digital media today as we know it. He circumvented the rigid traditions of most journalists and newspapers of his day to break a story that changed one woman's life, as well as the political fabric of our country. Yet his shocking and at times plain bizarre origin story has seldom been told — before "Impeachment," that is.