FX's "Impeachment" doesn't acquit itself well, despite a humanizing portrayal by Beanie Feldstein 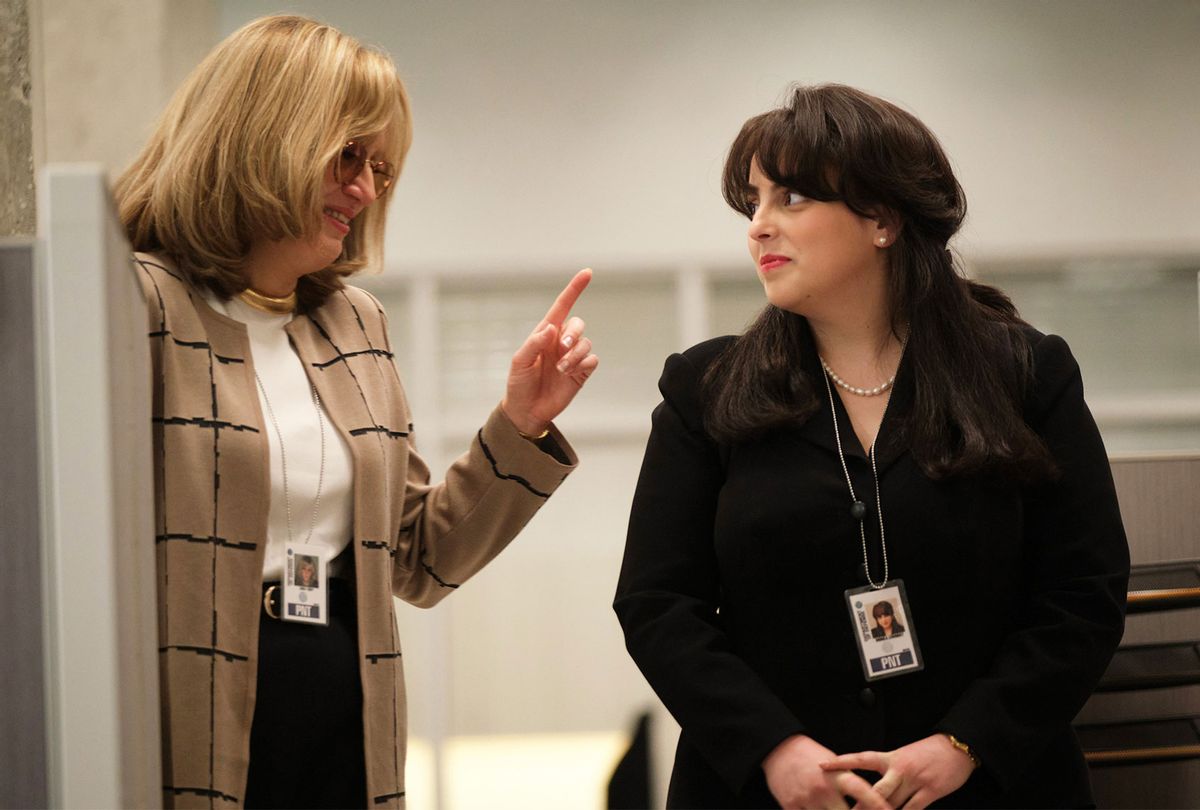 A fleeting detail in the sixth episode of "Impeachment: American Crime Story" succinctly captures what Monica Lewinsky must have been feeling when she realizes how much trouble she's in: She's sitting in hotel room, surrounded by FBI agents, when one of them, played by Colin Hanks, offers her some water. She accepts the crystal tumbler, placing it on a glass coffee table.

Director Ryan Murphy (aided by director of photography Simon Dennis) shoots this moment from beneath the table, granting the audience the perspective of someone underwater. That means we gaze upward at this shocked, frightened young woman gazing into the cut glass, looking like she's drowning or, if not that, as if she'd like to.

All of this takes but a few seconds to play within the seven hours provided for review, but within that space Beanie Feldstein fills a canvas with her interpretation of Lewinsky's fear. What happens to Feldstein's Monica in that room is a nightmare, part of a 12-hour stretch during which federal agents aggressively intimidated and threatened her to come clean about her relationship with then-president Bill Clinton (Clive Owen).

Today liberals view the Clinton affair as one of the best-known examples of an abuse of power differentials in politics and the workplace. Episode 6 demonstrates this point with clarity. For most of the hour Lewinsky and the friend who sells her out, Linda Tripp (Sarah Paulson) are badgered or ordered around by men. Eventually Monica's mother (Mira Sorvino) arrives to comfort her daughter, but her father and his lawyer, reached in a phone call, are the only people the agents listen to and take seriously.

From that point onward, it is men who shape the story surrounding these women. (Knowing that "Impeachment: American Crime Story" originally was based on workplace masturbator Jeffrey Toobin's book "A Vast Conspiracy: The Real Story of the Sex Scandal That Nearly Brought Down a President," which the network optioned back in 2017, adds a note of irony to this aspect of the story.)  Male journalists write Lewinsky as an opportunist. Men who knew her in high school and college come forward to offer their opinion that she's a stalker. But Tripp doesn't come out cleanly, either. Comedians make her a laughingstock, playing up her size and her looks. "Saturday Night Live" put John Goodman in a wig and a dress for a sketch parodying one of the lunchtime conversations she had with Lewinsky during which she earned the younger woman's trust.

This becomes the hour in which Feldstein and Sarah Burgess, who wrote the episode, most plainly delineates the point of this "American Crime Story" installment – at least, what one presumes it to be.

It's also the sixth installment in a 10-part examination of the systemic misogyny that destroyed Monica Lewinsky's reputation, which is the real problem. Getting to that essential episode asks us to endure five hours during which the aim of "Impeachment" is never as clear or certain. Between its hopscotch through various perspectives and chronological touchstones in Clinton's presidency as they relate to Kenneth Starr's investigation, it feels disjointed.

At times you may question whether the other actors realize they're in the same show as Feldstein or whether that show is a drama or a dark comedy. This is how extensively the actors are flogging their part in a history that much of its audience has lived, and whose main players are still key players on the nation's political stage. When a boorish official asks for an opinion on an angle from a youngster who goes by Kavanaugh you may wince less due to the name recognition than noticing you're being manipulated into that reaction.

More than five and a half years has transpired since "The People v. O.J. Simpson" set the tone for Murphy's "American Crime Story" anthology series, transforming the most celebrated murder case of the modern era into a parable about race, fame, class and wealth. "The Assassination of Gianni Versace" sought to view America's fraught relationship with queer culture through a lens of obsession, with each portraying the media as complicit in perpetuating bigotry through editorial choices and coverage.

"Impeachment" does something similar while reappraising the Clinton affair through Lewinsky's point of view, consistent with the #MeToo era's achievement in baring the power differential between Clinton and a 20-something intern.

Lewinsky also has a producer credit, which partly explains the sympathetic rendering of her character against the cartoonish scripting that went into fleshing out Clinton accuser Paula Jones (Annaleigh Ashford) and Tripp. For her part Ashford calls forth a surefooted performance in the midst of a ham assortment, including an impersonation of Susan Carpenter-McMillan by Judith Light that's more worthy of a drag competition than a limited series.

Paulson's take, meanwhile, is simply puzzling. She recently insisted that her goal was to lend Tripp a note of humanity in order to help us understand why she would betray the trust of a woman many years her junior, both in age and experience.

By the close of the first seven hours of "Impeachment," it is still not clear if she ever accomplishes this. Watching Paulson act against her synthetic proboscis and jowls becomes its own fascinating diversion, especially during the first two or three hours when she and other players such as Billy Eichner's Matt Drudge and Cobie Smulders' Ann Coulter establish the flavor of partisan tension permeating 1990s Washington D.C.

That costuming also helps us understand the extent by which "Impeachment" fails to meet the bar set by previous "American Crime Story" installments.

It all comes down to viewing one through the strands of a wig and another by a nose, one of several. If Paulson's work in "The People v. O.J. Simpson: American Crime Story" was a tour de force despite her having to contend with a series of impressively frightening wigs, the extensive prosthetics she wears in "Impeachment" smother her efforts before they can breach the latex gummed on to her face.

But the fault doesn't rest with Paulson or the makeup department; both the actor and the cosmetics artists that constructed Tripp's likeness around her are merely doing the best they can with material given them. Over-the-top dialogue is Murphy signature, so one comes to expect lines such as "That stain is white gold!" to roll out of the mouth of someone like Margo Martindale with the smoothness of a bowling ball rocketing towards a strike. Many of them do. Few weave together in a way that expands the character profiles of the people saying them or those they're speaking about.

Tripp is the most wretched exhibit of this, written as someone captive to envy – hungry for recognition more than respect, eager to be recognized as a D.C. insider – and little more. Beyond that and a few scenes of her miserably blending SlimFast shakes or chewing one of her sad frozen dinners, all she has is work gossip and the excitement a too-eager Monica brings into her small life. We already assumed that about Linda Tripp; Paulson merely adds her own lace and ruffles to that picture.

Interiority informs nothing about "Impeachment" or its personalities, you see. Everything lies in the exteriors – the prosthetics, the precise approximation of a famous person's timbre or manner of speech. Smulders does a fabulous job with Coulter in this regard, but her impressive act might be attributable in part to the fact that Coulter herself is a caricature.

Less excusable is Owen's obvious effort to maintain his vocal impersonation of Clinton at the expense of his physicality. He may have the man's inflections down cold, but the rest of him becomes petrified wood. But at least he has more to do onscreen than Edie Falco's Hillary Clinton, given barely enough screen time to notice she's there.

Loading huge names into these ripped-from-the-headlines takes is central to the "American Crime Story" brand. We accept this. But "Impeachment" presents a case where the screen stars are so overwhelmed by production's devotion to excess and maximal interpretation of recent history that its key lessons are largely negated. Lewinsky, through Feldstein, may be the only one to emerge more fully acquitted in the public's perception.

Many of us decided years ago that Lewinsky has gone through enough; adding our own suffering to the equation by sitting through this show won't change the #MeToo era's perception of what the script posits through the show's version of George Conway. "Having sex with an office girl is not a high crime or misdemeanor," he tells Smulders' Coulter.

Her response to Conway might as well double as an indictment of the show itself. She says, "You've become a bore."