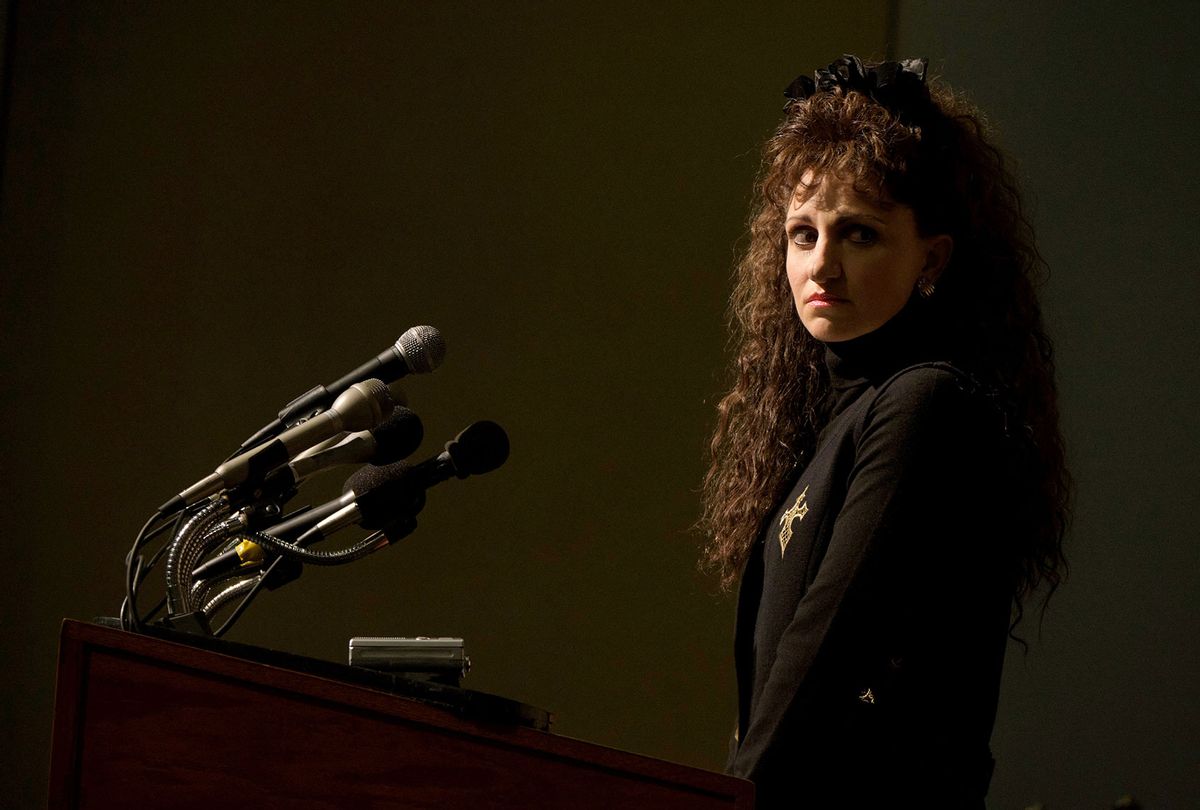 The story of Monica Lewinsky, currently unfolding in dramatized fashion on FX's "Impeachment: American Crime Story," is the stuff of legend in American pop culture. But less known is the story of Paula Jones, an Arkansas woman who accused Bill Clinton (portrayed by Clive Owen) of sexual harassment in the 1990s, and whose story is being portrayed parallel to Beanie Feldstein's Lewinsky on "Impeachment."

We meet Paula Jones (Annaleigh Ashford) as a doe-eyed, former Arkansas state employee, whose experience being pursued by Clinton in his hotel room is making the rounds in political media. Determined to clear her name and assert that the president made unwanted and unreciprocated sexual advances on her, Paula soon aligns herself with a formidable legal team, and gains support from Susan Carpenter-McMillan (Judith Light), a savvy, conservative firebrand and president of the Women's Coalition.

In real life, Carpenter-McMillan became Jones' chief counselor and spokeswoman by 1997. A notorious anti-abortion activist, her prolific media appearances were described by Slate in 1997 as "manic, sarcastic, [and] vitriolic," and "the summer's best entertainment."

In the second episode of "Impeachment," Carpenter-McMillan introduces herself to Jones' legal team as an advocate for what she calls "conservative feminism." Of course, she puts "conservative" before "feminism" because the two ideologies are inherently at odds with each other, no matter how many Carly Fiorinas, Ivanka Trumps, Sarah Palins or Kellyanne Conways swear they're aligned.

It's difficult to fully blame conservative women for the recurring nuisance of the self-titled conservative feminist movement. After all, liberal feminism has long opened the door for it by frequently celebrating powerful women in politics and corporations with minimal scrutiny applied to these women's policy stances or their treatment of other women and marginalized people.

When feminism is reduced to hollow, capitalistic acts like buying an expensive pair of high heels or becoming a She-E-O, conservative anti-abortion women can easily co-opt this movement, assigning the "feminist" label to anything — and I mean anything — women do. Had feminism concretely been attached to tangible acts and values that empower all women and marginalized people, rather than a select minority of the most privileged among them, Carpenter-McMillan would have had little to cling onto. The enduring myth of "conservative feminism" would subsist, and white, Republican lady-grifters would have to find a new schtick.

On "Impeachment," Carpenter-McMillan declares she's there to protect Paula's interests, despite minutes later later telling a sales lady at Nordstrom that Paula is "dumb as a rock." Beneath Carpenter-McMillan's claimed support for Paula and sexual harassment victims, she regards them as an opportunity to bring down a president whose stances on reproductive rights are decisively beneficial to women and pregnant people.

One scene highlights Carpenter-McMillan's clear anti-abortion stance. Although she wants Paula to make TV appearances about her case, her lawyers try to refuse, asserting that the Supreme Court will rule on it.

"The same Supreme Court that made it legal to murder children?" Carpenter-McMillan responds. Paula is stunned, taking the anti-abortion activist literally, which brings Carpenter-McMillan to clarify that she means "unborn children" — or, you know, fetuses and embryos.

Also, in the Nordstrom changing room, when Paula expresses discomfort with the chic, "city" girl pantsuit Carpenter-McMillan wants her to wear.

"It's all dress-up, Paula. People get confused when I tell them I'm a conservative feminist," she says. You don't have to be a lesbian or an abortionist to believe a woman deserves equal respect to a man."

Much emphasis has been made in "Impeachment" on Carpenter-McMillan's anti-abortion aspirations, which makes sense if she's a "conservative feminist" in the camp of more recent Republican women and female Trump advisers. Carly Fiorina, a 2016 presidential candidate and another self-proclaimed conservative feminist, drew widespread support among Republicans when she spread the bizarre lie that she'd seen video footage of a Planned Parenthood worker "harvesting" an aborted fetus' brain. Last year, Ivanka Trump declared she is "unapologetically pro-life," and campaigned for a slew of rabidly anti-abortion women politicians, including Iowa Gov. Kim Reynolds, who signed a near-total abortion ban in her state.

Just last week, Sarah Palin took to Fox News to declare herself a "real feminist," and accost Rep. Alexandria Ocasio-Cortez for "milking the whole female thing." Ocasio-Cortez had refuted Texas Gov. Greg Abbott's claim that he would end rape so that women wouldn't have to give birth to their rapists' babies, in defense of his state's near-total abortion ban. Despite Ms. Sarah "real feminist" Palin's support for Abbott, Texas' ban is especially harmful to survivors and victims, whose abusive exes could use it as grounds to stalk and report them for having abortions.

So-called "feminists" who hold anti-abortion views have long existed, insisting women "deserve better" than abortion without actually articulating what that entails. Truthfully, even if America miraculously addressed all of the material conditions that make pregnancy and motherhood so punishing, and enacted generous paid family leave and universal child care, the need for abortion care wouldn't magically disappear. No matter how many pantsuit-clad, smiling, white Republican women try to spin it differently, without the right to abortion, women and pregnant people are reduced to incubators who can be forced by the government to carry pregnancies and birth children without their consent.

One could devote hours to rattling off the infinite hypocrisies of pro-life feminists, including often opposing insurance coverage of birth control. But doing so is frankly pointless — their activism isn't about logic or cogency, but pink-washing violent patriarchal oppression. These "feminists" often refer to abortion as "abuse" inficted upon hapless pregnant women by evil, scary abortion providers, or "abortionists," all while not even marginally caring about actual rape and abuse victims. Conservative "feminists" either want victims to carry their rapists' babies, or somehow prove to doctors and law enforcement that they were raped and thus worthy of health care.

In 2018 at the height of the #MeToo movement, Republican and Democratic women Senators unanimously backed an effort to crack down on Congressional sexual harassment. It seemed like a unifying, special moment, but shouldn't have. On the surface, liberal and conservative so-called feminists alike purport to care about sexual harassment. But when feminism is a branding moniker rather than an ideology for gender justice, its stated values are seldom ever enforced. Instead, political opportunists of all genders, and across the ideological spectrum, selectively target and hold accountable some alleged abusers but not others, pending their politics.

This, of course, brings us back to Carpenter-McMillan. Perhaps she was right to take action against Bill Clinton, but she was motivated by her aspirations to end legal abortion, not help sexual harassment victims. Her unflinching opportunism on "Impeachment" is emblematic of conservative "feminism" as a whole. Beneath layers of shallow empowerment rhetoric, conservative "feminism" is really just conservatism — specifically, a conservatism that implores women to happily give up their rights, rather than have them seized.