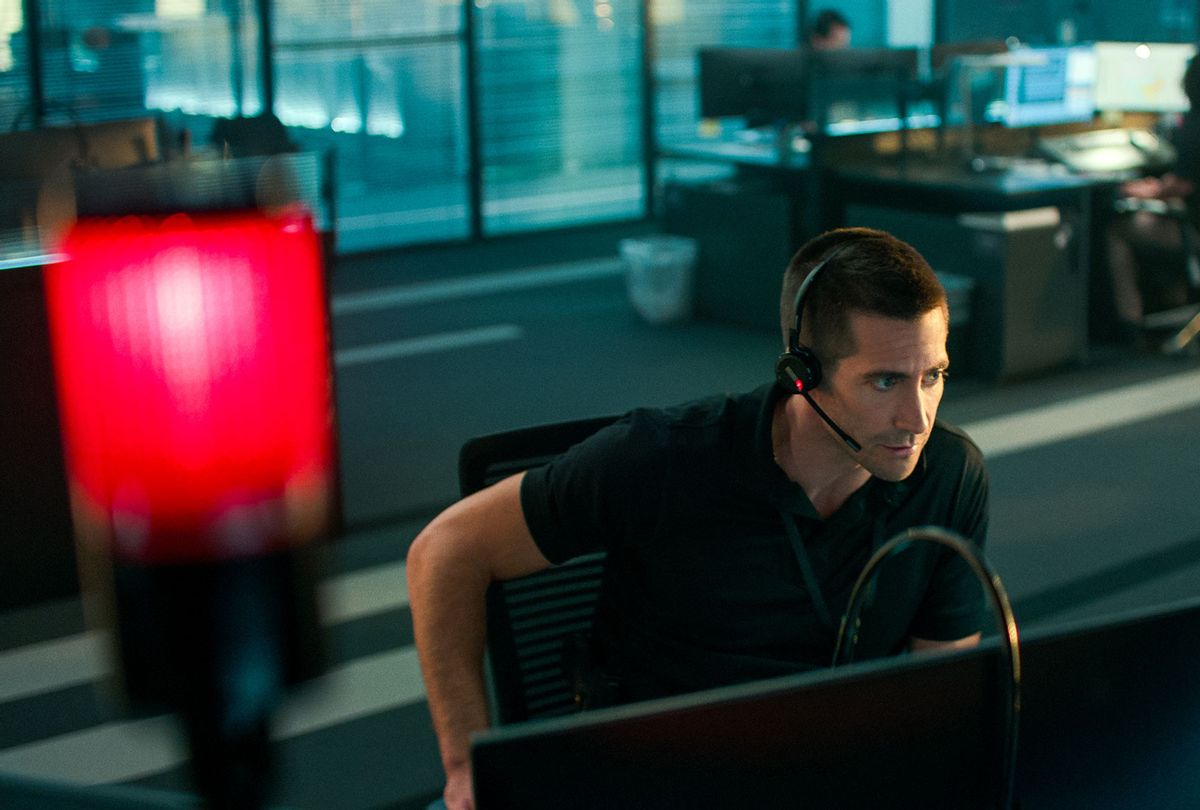 Jake Gyllenhaal in "The Guilty" (Netflix)
--

"I killed a man, a boy actually," Jake Gyllenhaal as LAPD officer Joe Baylor blurts out in Netflix's cop thriller, "The Guilty." He's speaking on the phone with a woman who is standing on a highway overpass, preparing to jump.

"I don't know, because I could. I wanted to punish him. I was angry, I'm so angry," Joe responds, breathless and holding back tears.

It's a pivotal moment for both Joe and viewers alike. Throughout the film, it's been hinted that Joe is in trouble for some reason, which is why he's been taken out of the field and sidelined to the 911 operator's desk. A Los Angeles Times reporter has been calling to get his side of the story before his court date the next day. But despite these hazy hints, the audience has watched as Joe helps this mysterious woman, Emily, (voiced by Riley Keough) and her kids, even after his shift has ended. Despite seeming initially cynical about his call operator duties at first, this particular call reinvigorated Joe's passion and has moved him to own up to his transgression.

Taking place during the movie's last act, Joe's rueful confession seems to be what "The Guilty" wants the audience to take away from the film. Joe has abused his power to perpetrate a horrifying act that in real life is an unfortunately recurring trend among law enforcement officers. By the end of the film, Joe is finally honest about what he's done, even when it means he will inevitably face serious consequences.

With the revelation that Joe has done something terrible, one might think the film bucks the usual portrayals of pro-cop propaganda (copaganda), right? Not exactly.

"The Guilty," Antoine Fuqua's adaptation of the 2018 Danish film of the same name, certainly differs from the typical hero-cop fare in many ways. The movie lacks the usual highly physical, bad-guy-chasing sequences that often valorize police officers and portray their violence and physicality as heroism in cop films. The most action we see in the claustrophobic thriller is when Gyllenhaal takes a hit from an inhaler; we never even see a gun out of its holster.

Instead, nearly all of "The Guilty" is shot from the perspective of Joe, alone in a room on the phone as he tries to track down Emly, a woman in distress who initially calls him from the road and sounds like she's been kidnapped. Most of the movie is just Joe making calls, doing searches from his computer, desperately trying to find Emily, and ensure she and her children are safe. From his perspective, Emily is a woman who has been abducted by her ex-husband at knifepoint.

The movie's thrills come from how Joe and the viewers' expectations are subverted. The more he discovers about Emily's real story, the clearer it becomes that whatever she's told Joe isn't to be trusted. Instead, it turns out that she suffers from a severe mental illness, and after not being able to access her medications, she's cut open and possibly killed her infant son. To protect the kids, her ex removed Emily from her home, intending to place her in a psychiatric facility when Emily first calls 911 and reaches Joe.

For all of the nuance and refreshing creative direction of "The Guilty," much of it still suffers from the same, tired tropes that it presumably tries to avoid.

Sure, Emily is a highly sympathetic character, a mother who loves her kids and has done her best despite being severely ill. But the movie still falls into a common trap of seemingly equating mental illness with violence, despite how those with mental illnesses are more likely to be victims than perpetrators of violence. Emily has attacked her baby to rid him of imagined "snakes," and therefore becomes yet another example of a woman who isn't to be trusted or believed, and now needs to be saved from herself.

And of course that duty falls to men in the film – first her ex-husband, who predictably turns out to be the trustworthy one, and then Joe, a man whose wife won't let him see his own child.

At a time when the thriller and horror genres are increasingly subverting stereotypes and sexist writing of "crazy," hysterical or mentally ill female characters, "The Guilty" feels like a step backwards. Why must we have another movie perpetuating the harmful stereotype? More recent movies like Netflix's "The Woman in the Window" or Hulu's "False Positive" both involve the very real-life, gendered issue of gaslighting, or forcing someone to question their own reality. Hysteria, paranoia and erratic behavior among female characters in these movies are shown to be a product of male manipulation and cruelty.

As for Joe, however "complicated" we're to believe he is, ultimately, he's still our protagonist, the one person whose perspective defines the entirety of the movie. He may have killed someone, but we know nothing about his victim or what they did or didn't do. All we see instead is Joe as he tries to save a woman's life, desperate to compensate for taking someone else's. Instead of the pain of the family of the man Joe killed, we see Joe, crying on the bathroom floor, physically ill with guilt and shame.

It turns out that Joe's crime goes beyond the killing that he confessed to Emily. In the film's final scene, he calls his former cop partner, Rick (Eli Goree), who is revealed to not only have seen Joe killing the man, but has also lied in a witness statement to protect Joe from accountability. According to an agreed upon plan, Rick was supposed to continue that lie in court. Joe now wants to walk back that plan entirely, and insists that his former partner help him come clean.

"You won't see your daughter for years," Rick warns him, as both men cry over the phone.

There was perhaps a time in this country, maybe even just a few years ago, that a movie like "The Guilty" could have been seen as progressive and honest about the ways police officers often use their power to perform horrific acts and can easily cover for each other. But today, at a time when racial justice activism has pushed beyond individualistic narratives of systemic police violence as a matter of bad apples vs. good apples, it's clear how "The Guilty" still ultimately contributes to copaganda.

Yes, Joe killed someone, and yes, he and his partner initially planned to lie to ensure he could get away with it — this doesn't exactly portray policing in a positive light. But Joe's story – with his sobbing at the end – is portrayed as one of heroism. Good job for telling the truth! His honesty is ultimately a far cry from what we see in real life, as cops who have brutally killed people on camera with videos of their murders going viral, still stand trial and insist that we not believe what we've seen with our own eyes. All too often, they do, in fact, get away with it — so much so that the conviction of George Floyd's killer earlier this year came as a moment of overwhelming relief. Speaking of what we see in real life, Joe's journey to save a woman's life also quite differs from jarringly high rates of police violence against women.

Ultimately, "The Guilty" isn't quite as unwatchable as some of the older cop thrillers and "Law and Order" spinoffs, set on ennobling law enforcement and the criminal justice system. But intentionally or not, it still bolsters older, bygone tropes, of women as crazy, the mentally ill as violent, and policing as salvageable by individual, honest cops.