In Netflix thriller "The Guilty," cop Jake Gyllenhaal mesmerizes during one fateful night on the job 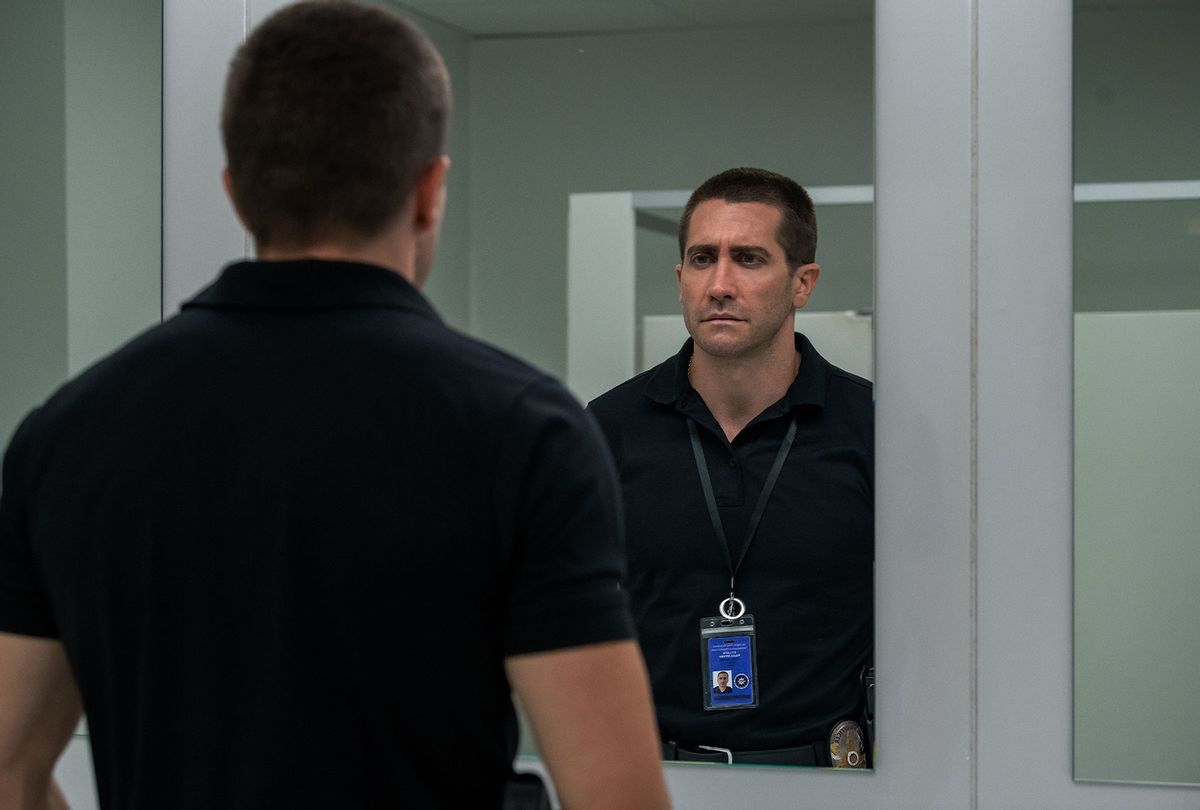 Director Antoine Fuqua's passable remake of the 2018 Danish film, "The Guilty," is a perfect film to shoot during COVID. This compact story, about a 911 dispatcher who receives a distress call, is almost a one-man showcase for the actor (Jake Gyllenhaal, who also produced). Moreover, it deals with another issue that is prominent in the news, that of the duties and responsibilities of the police. Both Fuqua and Gyllenhaal, working from a script by Nic Pizzolatto ("True Detective") give this relentless, claustrophobic drama their all, but, somehow, it is more phlegmatic than exciting.

Joe Baylor (Jake Gyllenhaal) is first seen using his inhaler in the gender neutral bathroom at the 911 dispatch facility where he is working. Joe is a Los Angeles police officer who has been demoted to desk duty while he awaits trial for an unspecified incident. A reporter from the Los Angeles Times keeps calling him, hoping to get a quote about his court appearance the next day, but Joe dismisses her.

As Joe's shift begins — the film is set over the course of one long night — he answers 911 calls in a flat, affectless tone that exudes calm as he tries to help citizens. But he quickly becomes impatient, as when a man (voiced by Paul Dano) calls about his laptop being stolen by a sex worker. Joe's anger issues become more apparent, especially when he gets more hotheaded, lashing out at his colleagues, Sgt. Wade (Christina Vidal) and coworker, Manny (Adrian Martinez). His tone is particularly edgy when he tells an injured cyclist, "Call an Uber and don't bike drunk, asshole!" Yes, Joe is stressed with his upcoming trial, but he is also having issues with his wife Jess (voiced by Gillian Zinser), whom he has been separated from for six months. She is not letting him speak to their daughter.

Joe is an anxious, raw nerve, and Gyllenhaal plays this toxic man with his typical intensity. He grips his inhaler like a stress ball. He has verbal and physical outbursts. He is a man not in control of his emotions. And, as the film shows, he perhaps cares too much. He often repeats that the job of a police officer is to provide protection.

Fuqua shoots much of the film by focusing on Gyllenhaal's face, a terrific landscape, and the actor conveys his internal and external emotions with his eyes and his implacable expressions. When Joe is staring at an antacid, he is practically hypnotized, and when he is looking at his phone or his computer screens, he is laser-focused. A scene of him asking a caller to "breathe with me," as he tries to get them to calm down, is also very effective.

"The Guilty" pivots on a particular call Joe receives from a woman named Emily (voiced by Riley Keough, "Zola"). She has clued Joe in that she is being abducted by pretending to call her daughter. Joe becomes emotionally involved in this situation keeping Emily on the line as he connects with the police station and the California Highway Patrol. While Joe tries to coordinate a rescue, (Los Angeles is also experiencing wildfires) there is a lack of concrete information. An effort to stop a white van that Joe suspects contains Emily is inconclusive. (Fuqua cuts to a hazy shot of the van being pulled over, which is a mistake; viewers can imagine the scene far more vividly.)

But as the evening unfolds, Joe also contacts Emily's daughter Abby (voiced by Christiana Montoya), who describes a situation that causes Joe more concern. Taking the law into his own hands, Joe is soon calling in favors from friends and insisting the cops not only do a welfare check on Emily's kids (Abby has a baby brother, Oliver), but also kick down the door of Emily's estranged husband, Henry (voiced by Peter Sarsgaard), whom Joe believes has abducted Emily.

"The Guilty" builds to a climactic moment that involves Joe experiencing an emotional catharsis as the situation with Emily comes to a head. The film deliberately, wisely, buries this lede, but in doing so, it also mutes the potency of the drama. (Fuqua errs again when he amps up the music during one of the film's "twists.") After a big confessional moment, what follows — a scene of Joe in a bathroom stall, reeling from what has transpired — is smartly filmed and acted, but surprisingly unemotional.

Herein lies the film's conundrum: viewers are supposed to side with Joe, who strongly believes he is doing the "right thing" at all times. But he is not a particularly likeable character. He shouts at everyone he talks at (not to) and demands that they do what he wants, regardless of protocol. He is the quintessential "entitled" white male police officer dictating that he is "doing his job" — even when he is not doing what he is supposed to. Joe's flawed character is also what makes "The Guilty" so interesting.

Fuqua's film is spare and compelling, and perfectly suited for both Netflix and fans of Jake Gyllenhaal.

"The Guilty" is currently in theaters and streams on Netflix beginning Oct. 1.