"Zola," a film that confirms the same white women that smile in your face be the same ones that come for you later 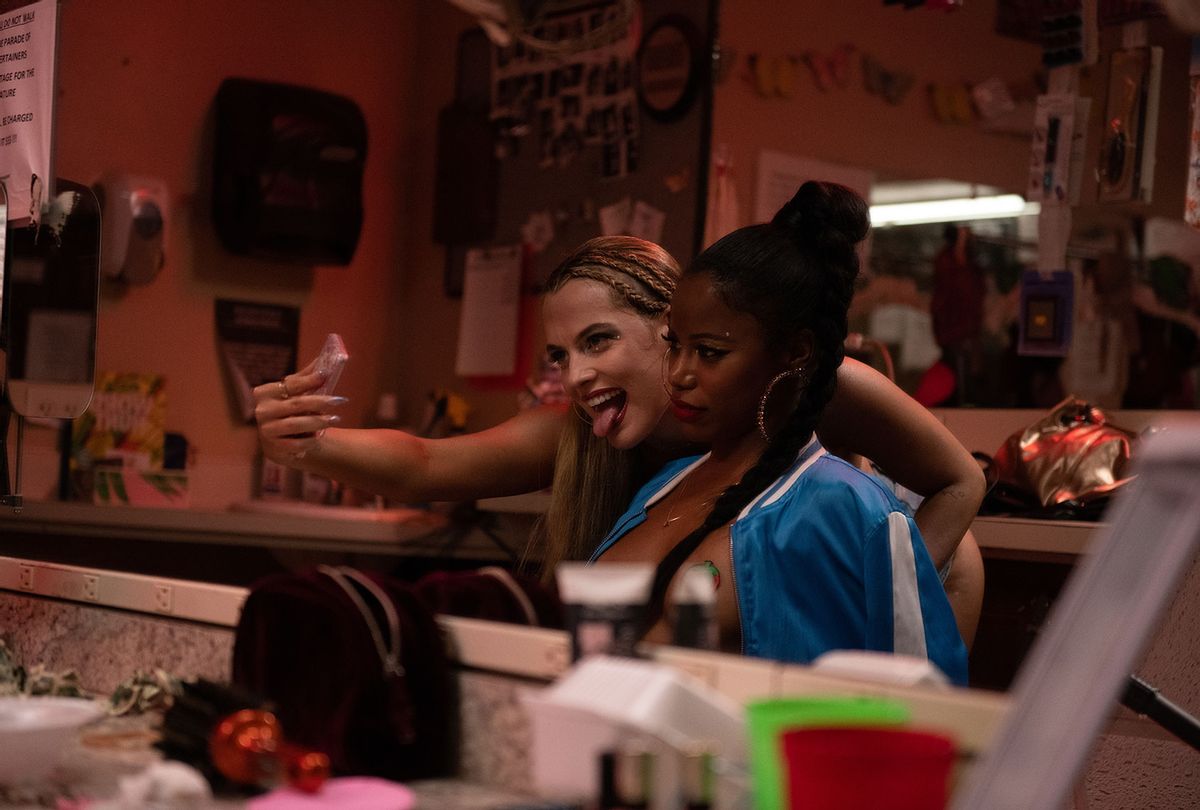 "Zola," though blackheartedly funny at points, is not a comedy. Technically it's a drama, but that doesn't describe the whole picture either. Narratively and aesthetically speaking, this film has layers. Contains multitudes. Feelings. The only thing it isn't is wearying.

It begins in a relatively benign place, with Taylour Paige's Zola meeting a woman named Stefani (Riley Keough) during her shift as a restaurant server. The two hit it off immediately, connecting over a mutual affinity for pole dancing. Not long after they pull a shift together at a local club, where we watch them laugh together in the parking lot.

The next day Stefani hits up Zola and invites her to join her on a weekend in Tampa, luring her with the promise of making thousands in tips for dancing. Zola hesitates, but ultimately joins Stefani, her boyfriend and Stefani's "roommate" for the car trip down from Detroit. Their arrival in Florida is where the story gets messy.

Black women, however, may clock Stefani for what she is the moment she opens her mouth and spews a thick blaccent that doubles as the distant clacking of trouble's heels, strutting straight in Zola's direction. Director Janicza Bravo and her co-writer Jeremy O. Harris are speaking expressly to Black women in these small moments and others that seem innocuous without a close read what's happening.

"Same b***h that wanna smile in your face be the same b***h that gonna come for you later," Zola gleefully tells Stefani during their first club outing together, the only good one they'll have. Bravo films that moment to look like Stefani gets her, like they're on the same page. "Oh God!" she says excitedly, slapping Zola on the thigh, a call Zola responds to with as similar enthusiasm. New friendship always feels euphoric and looks beautiful.

The scene cuts to the pair of them in the parking lot continuing to gossip, talking over each other. "Why you DMing me?" Zola says, as if recalling another interaction with someone lesser. "Sis, why you taggin' me on your photos?"

She keeps talking, but Stefani homes in on one word she won't let go: "Sis." This becomes her only answer to everything Zola's says: "Si-is! Si-is! Si-is!" Zola finishes her speech and grins uncomfortably at the rictus breaking across Stefani's face and the glowing eyes above it.

By the very nature of who she is, though, Stefani can never be exactly like Zola, or live her life or fully understand her problems. She can, however, test her boundaries. See how far this girl is willing to let her step. This is how it starts, with an attempt to connect that transforms into minstrelsy. Once Zola lets the "sis" business slide, it's all downhill.

On their car trip Stefani brays her way through a story about a "dookey-ass bitch with her nappy-ass hair" and says, "Get your ghetto ass up out my face! It's not my fault you nasty! It's not my fault I make more money than you!"  Stefani's boyfriend and her roommate are in hysterics as they listen, but Zola is far from entertained. She recognizes that's what Stefani will say about her when the honeymoon ends. Assuredly it does.

Everything in "Zola" is heightened to mimic the extremity and shallowness of social media. It holds the honor as the first feature film based on a Twitter thread, itself one of the first of its kind, if not the first.  A'Ziah "Zola" King dropped the "mostly true" 148 Tweet story in October 2015 and almost immediately it became a phenomenon.

The enthralled public reveled at how wild of a story it was, and not long after it went viral the woman who inspired Stefani, Jessica Swiatkowski, weighed in with her version of events in a Reddit post, a tell in itself. She claims it was Zola who was deceitful, not her. Those suspicious of King's version of events took Swiatkowski's version as gospel.

That is, until two more women who didn't know King came forward, revealing that Swiatkowski and her so-called roommate, actually her pimp, worked together to ensnare them in a sex trafficking scheme.

One of the victims, Jessica Lynn Forgie, posted her piece on Facebook, saying she was "sick & f****g tired of people backing Jessica up on the ZOLA story & saying it's a lie. No, it's definitely the DAMN TRUTH & Jessica knows it. She's just mad she got caught. "

Forgie and her friend escaped and alerted police, leading to the arrest of Akporode "Rudy" Uwedjojevwe. He was charged with sexual assault, battery, two counts of trafficking, and two counts of attempted pandering with threat of physical force. He pleaded guilty the sex trafficking and coercion charges, and is serving a 16-year prison sentence.

These details are both important and relevant to the figurative subtweet Bravo is sending through "Zola." Swiatkowski, a blonde with the face of a second-string Disney channel starlet, knows what she looks like and what she was doing when she met King and those other women.

More than this, she knew exactly how to delegitimize King's credibility as a Black woman in her rebuttal, in which she not only switched her role to that of the victim but described King thusly: "This girl walks out in some basic leggings and torn shirt with a short nappy wig on that, excuse my language, smelled like ass!" She goes on to allege that King "hadn't clean up [sic] like I'd hoped" when they got to the first club.

There's a long list of racist stereotypes white people fish out of the bottom drawer to slander Black people, and in her post Swiatkowski throws out a few of them. The accusations of being unclean and the "nappy wig" comment are real classics among those that white girls use to paint Black women as unattractive, undesirable wrecks.

Harris and Bravo lay it on thicker in "Zola" late in the film when the director pauses the narrative track to insert Stefani's perspective.

"We meet at the restaurant she work at," a Mary Kay pink suit-clad Stefani begins, claiming she was there with "my community leader Jonathan." "This very ratched and very Black woman comes to take our order," she says, adding that Zola called her the next day "like, 'I'm a ex dancer, I'm broke, I need welfare.' And I told her I don't f**k with that life no more, and she was like 'who you f**k with?' and I say, 'I f**k with Jesus. My Lord and Savior.'"

Throughout these scenes Paige, a stunning woman, is obscured by cheapness. There's hay in her hair as she steps up to take Stefani's order, undulating lasciviously. When Stefani picks her up for their trip she's switches out in a slack hefty bag and the type of wig Swiatkowski disparages her screed.

Once they get to Tampa, Stefani says, "The club don't let her dance 'cause she dirty. But everybody loved me! Reason to be a jealous b***h number one."

By that point in the film Zola is already in deep trouble but thinking her way out of it. Much earlier Stefani persuades her to stay by whipping up some victimhood waterworks in response to Zola yelling at her, which she has a right to do. After all, in her trip invitation Stefani left out the part of where Zola would be expected to have sex with strangers for money.

Zola confronts her about this in the hotel room where the roommate is holding them. She's livid, and Bravo frames the shot to show her on the far left of the screen with Stefani on the distant right, shelves full of black and white knickknacks dividing them.  Zola is dressed modestly, relatively speaking, wearing a satin jacket and short shorts. Stefani wears a cheap looking denim romper held up with spaghetti straps.

"Girl, listen. No shade. No shame. Do you. But that is not what you told me I was coming up here to do," Zola says in a normal tone, calmly. Stefani, appearing to shrink away from her, softly replies, "Are you going to hit me?" Then comes the weeping.

To this day I maintain close friendships with several white women. They are strong, platonic relationships – we support each other, advocate for each other, uplift each other. Our affection is reciprocal. But trust me when I say these women are in my circle despite my having survived extremely toxic friendship breakups, all instigated by and starring white women.

One, after making a new group of friends who never accepted me, advised me to try not to be "scary" and "intimidating" when I observed that I didn't find these people to be welcoming. (This is coded language white people use to justify maltreating Black women.)

Another was an expert gaslighter who salted the Earth behind me after we parted. I found this out when I tried to maintain mutual relationships. We're all adults, after all. I had no clue what she alleged that I did or what I was, but based on some of the reactions I received, it had to be monstrous. And perhaps those breakups and the reputation homicide weren't specific to race, but man oh man, are there a lot of essays by Black women who tell stories similar to mine.

"Most of the abuse I've experienced from white women came in a covert form," Savannah Worley wrote in a Medium essay. "I've had nasty rumors spread about me, which ruined me emotionally, socially, and even financially (it's hard to keep a job where a white co-worker turns your supervisors against you, all of whom are also white women and more likely to be sympathetic to your co-worker)."

"Roots" tried to warn us back in the day, in fact, with its tight focus on the famous friendship between Kizzy and Missy Anne, the latter of whom is overjoyed to know that she'll be the owner of her Black best friend. Missy Anne doesn't understand why that upsets Kizzy, other than the fact that she'll be ripped away from her family. Even now, Missy Anne is still code for a certain kind of white woman. The Karen Eternal.

Keough's Stefani is a modern-day Missy Anne, the smiling bait that lures women like Zola into terrible situations and keeps her in danger by reminding them that friends stick with friends. Stefani was destined to betray Zola from the moment she called her sis, sis, sis, knowing they will never be family or even cool.

"Zola," with its story of a dangerous, foolhardy false friend, confirms that Black women aren't angry, scary, intimidating or crazy to stand up to white women who don't have their best interests at heart. This is why in its own strange way, it's comforting.

In that previously described moment when Zola says "same b***h that wanna smile in your face be the same b***h that gonna come for you later," Bravo interprets Stefani's enthusiastic reaction in subtitles. "I see you," the first line reads. A second says. "I feel seen, I feel heard." It looks like a translation, but it's really a text from Bravo to Zola's diasporic sisters – seen, read and received.

"Zola" is now playing in theaters.