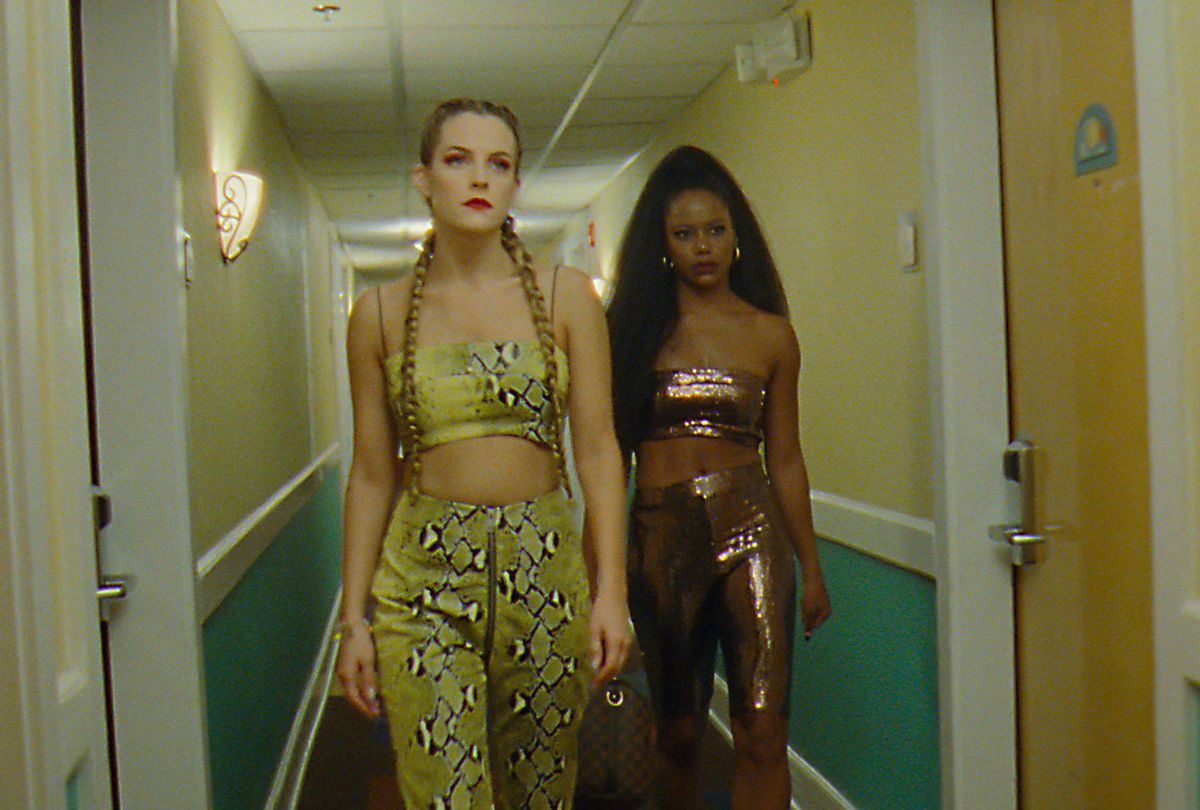 Writer/director Janicza Bravo's audacious drama, "Zola" — based on the tweets by A'Ziah King — is a helluva story and one literal hell of a movie. The film is brilliantly shot, morphing from fantasy to reality to nightmare in under 90 minutes as Zola (Taylour Paige in a starmaking performance) recounts how she "fell out" with Stefani (Riley Keough) during a weekend trip to Tampa.

The two women meet in a restaurant where Zola works, and bond over the fact that they both are pole dancers. When Stefani invites Zola to join her, her boyfriend Derrek (Nicholas Braun of "Succession"), and X (Colman Domingo) to go make some money, Zola agrees, unaware of what she is getting herself into. Suffice it to say, things get tense and intense.

Bravo magnifies all the messy drama and invites viewers to go on a wild ride with the title character. The filmmaker spoke with Salon about her kinetic new film and her worst road trip ever.

You took over directorial duties after James Franco left the project. Can you talk about that?

I feel so lucky it got to be me. When the story came out in October 2015, I wanted it then. I kind of went after it. I sent it to my reps. They wrote me there was article in "Rolling Stone," and you approach it that way and can get her life rights. There were five bidders at that point, and I wasn't going to compete with bidders. I can't say I lost it because I wasn't really part of the conversation. When it was announced that James was going to direct it, with Killer Films (Christine Vachon's company) producing, I wrote Killer, because they produced my first film. I said that if this ever becomes available, please think of me because I am very interested in the project. Two years later, James stepped off of it, and I spent three months auditioning for it, and here we are.

What was it like meeting with A'Ziah aka Zola and adapting the story from her tweets?

Once I actually got the job as the director, that was the first order of business, meeting A'Ziah, the real Zola. We were texting and DMing each other a bit, and I wanted her to meet me and know that she had access to me, and I would let her in as much as she wanted to be, and I was hoping for the same. But I really wanted to be on her page, and at her pace, and make her feel comfortable because she was suddenly being thrust into a world that wasn't hers.

We did a Facetime chat, and we talked about where we came from, and why I loved her story so much, and I mentioned the films I watched and photographs that inspired me. And then I had her, at her own pace, retell me the Twitter story. We went through the whole arc of the story and asked if there was anything she had not included that she wanted to be in the story. There were a few things. Then I had her blessing to work on it. I spent a few months drafting, writing, with Jeremy [O. Harris]. Then I did my director's pass. So, a year or more later, I shared the draft with her, and she read it and gave her second blessing. That's the nuts and bolts of the unsexy steps of approaching the script.

Can you describe your visual approach to the storytelling, which has elements of fantasy, harsh reality, and downright nightmare? There is a real texture on the screen. It's glossy and gritty.

One of the main references — the homework I sent to everyone, from Jeremy O. Harris, to Ari Wegner, the cinematographer, to Katie Byron, the production designer to Joi McMillon, the editor — was a copy of Hieronymus Bosch's "The Garden of Earthly Delights." That painting is a triptych. Panel 1 is Heaven, Panel 2 is Earth, and Panel 3 is Hell. That is the arc of the film. When we are in Heaven our palette is softer, with less information, and things move at different, tempered pace, and when we enter Earth — moving from Detroit to Tampa — there is more movement and color, things get busier, and that's our proper entry. Panel three, we meet blackness. It is when the bottom drops out, and we are in Hell.

Can you talk about your editing strategy? The film zips along, taking viewers on the wild ride Zola endures. It also mirrors how society is fast-paced, or when time just crawls. We feel Zola's anxiety waiting out even horrible moment of this weekend.

This was my third time working with Joi, who edited the film. Your editor is the other writer. A'Ziah was the first writer, Jeremy and myself were the second and third writers, and Joi is the fourth and final writer. When we worked on my first feature, "Lemon," we did a similar approach to editing, it was very emotional. I wanted the editorial landscape to mirror the protagonist's interior. The frenetic-ness and the pressure you are feeling is a mirror into Zola's gut.

I'm curious about the decisions you made filming the scenes of a sexual nature. Can you talk about shooting the women and men in these key scenes?

I myself am a bit prudish, so I think some of that is my inherent prudishness. When I showed up to this text, there were a handful of things I wanted, and one of those things was that I didn't want to see naked women. I felt there is such a large library of naked lady bodies, and I don't need to add to that. There are going to be more films to add to this library and I don't need to be a part of it. I also thought, given the nature of the work, which is so vulnerable, if I were to use their bodies in that way, that it might take away from some of the dignity and the integrity that I wanted to imbue into the nature of where they had found themselves.

I wanted things to feel consensual. I talked with Ari who shot the film, and Katie the production designer, about what consent looks and feels like. In American films, sometimes nudity on screen doesn't feel consensual. I was thinking about some Helmut Newton photographs and why they work for me. They are often so naughty and so sexual, but it feels that there is this consent between the photographer and the model, and the model feels in control of the narrative even though she is not behind the lens. I wanted to find that the women felt taken care of. In exposing the men, it wasn't a "Ha! I get to do it!" or "I am a woman, and this is a woman's gaze." There was maybe some politics there, but it was really about being so much inside what the women who were being bought were seeing.

The film's tone is interesting. I could argue you are satirizing these characters, but I could also argue that you are celebrating them. Can you talk about what you intend or want viewers to see?

I feel pure celebration. One of the conversations I had with the actors was that I'm not interested in judgment. What you feel or what you see on the outside of these characters has no place here. We are going to show up, totally open and with generosity, and take care of who these people are because they are all based on someone. I want to approach them warmly and openly. It was like theater camp. Someone is paying us to play and explore. I love each of the four central characters so much and I inject some piece of myself into each of them.

This is a cautionary tale. What is the moral?

I'm not going to give the answer that you want hear, but I think it's a cautionary tale about making friends with white people, actually. And I'm going to leave it at that. [Laughs]

Not that you would ever be in Zola's situation, but what would you do if you were in her position?

What I would hope for is the access and the ability to process my trauma in the way she did, which was to retell it in that way. I've not found myself in that situation, but I have found myself in crunchy narratives that I didn't exactly know how I got there or what mistakes I made that brought me to them. The power of the pen to have that, and use her voice for agency, is so sexy to me. I applaud her for using Twitter as the tool to process and exorcise that witch. It could have left her rather unraveled.

What can you say is the worst weekend or road trip you've ever been on?

When I was 26, I did birthright in Israel. After my 10 days, I stayed in Israel for a few weeks and met an Israeli guy at a bar and we got on and with each other and he invited to me to seven days in Sinai. I said yes. I had this fantasy of a very sexy seven days in Sinai, and I had never really travelled in this part of this world. I got on a plane by myself, went to Egypt, and I did not wear the right clothes. I couldn't get a cab out of the airport as a single woman. I had to be accompanied by a man. I was begging men to let me be in their car. That was a really dark experience. I convinced this family to let me get in a car with them and I rode in the flatbed of this truck lying down with my luggage. I finally make it to this hotel on the beach right on the Dead Sea, and it's stunning. The cab driver, when he drops me off, asks when I am leaving. I get there and see this guy and I think we're about to have this wild romance. And he decides to stop speaking to me about 5 or 10 minutes after I landed there. He is with a group of friends, and no one speaks English. So, I spend seven days just inside my own head with no one really talking to me, just waiting for the cab to come back.