Copaganda: Most major media is still much too eager to embrace police-friendly framing

Yes, media has shown us the brutality. But it's also swallowed pro-police agitprop and spread false information 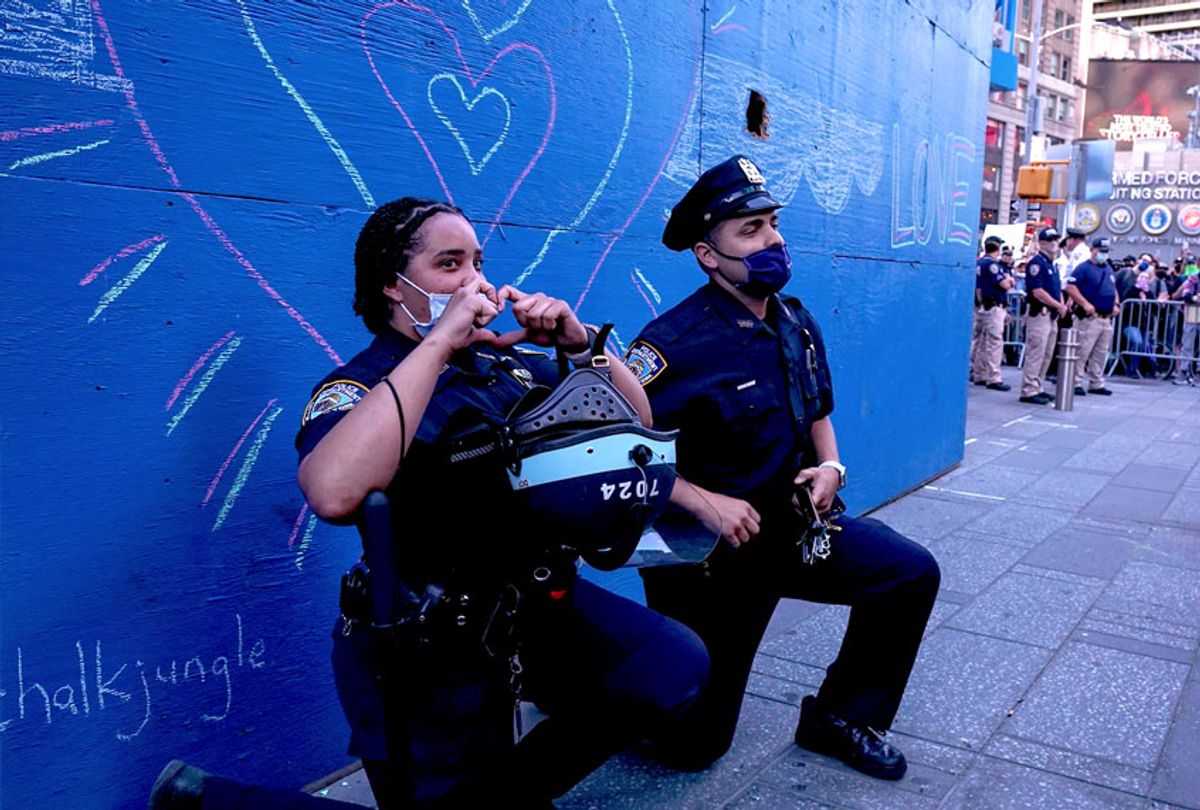 Two police officers take a knee during a demonstration by protesters in Times Square over the death of George Floyd by a Minneapolis police officer (BRYAN R. SMITH/AFP via Getty Images)
--

Warnings that these dark times were coming were often laughed off as hyperbolic jokes. Well here we are, with the United States president threatening to send the military and every federal law enforcement division to push back against peaceful protesters in Washington and other major cities, and the national media still shamefully both-sides-ing our slide into fascism.

In the last week, the American media has starkly reinforced the reality that it is ill-equipped to contextualize for its audiences the gravity of this moment. It has failed to directly press police on their tactics to suppress free speech — even as they broadcast live video of brutal attacks carried out by law enforcement against peaceful protesters, elected officials and journalists alike. (As this article was filed on Thursday night, social media was transfixed by video of police in Buffalo, New York, casually shoving an elderly man to the ground, causing a serious head injury.)

There's been very little interrogation of the law enforcement leaders whose departments now face unprecedented public criticism, even as news networks continue to rely on their public affairs officers to explain policing tactics. Instead, corporate media outlets have allowed their platforms to be hijacked by police across the country who are attempting to rewrite history in real time.

Writing for Alternet in 2016, media critic Adam Johnson described this type of editorialization as "copaganda," defining that as "any news story that uncritically advances a police department's image or helps undermine reform efforts."

On the 31st anniversary of the brutal Tiananmen Square massacre, The New York Times published an op-ed by Republican Sen. Tom Cotton of Arkansas calling for an escalation of military aggression against dissenters. Following an open revolt by a good chunk of the writers and reporters on staff on Wednesday — especially those of color — Times editorial page editor James Bennet defended the decision to publish a piece he conceded was "dangerous" while insisting Cotton's position was nevertheless "worthy of public debate." To make matters even worse, the Times beat a clumsy retreat on Thursday, saying in a PR statement that a "rushed editorial process led to the publication of an Op-Ed that did not meet our standards." According to subsequent reports, Bennet hadn't even read Cotton's op-ed before it was published.

The Times, in particular, has done a dreadful job of glossing over the state-sanctioned violence unleashed by Trump this week. Other national outlets seem to have been shaken out of their stenographic stupor, roundly condemning the use of armed federal police to assault protesters in an effort to get the president a cheap photo-op. As Salon and PressWatch columnist Dan Froomkin noted of the backlash to Trump's Bible stunt, "one thing almost entirely missing from the initial mainstream-media coverage, or the follow-ups, was any attempt to normalize what happened at Lafayette Park — or any attempt to defend it at all."

That is certainly progress.

But how agitprop by local police departments across the country has been covered (or ignored) by many of those same outlets is another story. Shocking as the Trump administration's attack on peaceful protesters was this week, the disgraceful clampdowns on dissent by public officials on the other side of the country, in cities like Los Angeles and Seattle, have yet to attract much national scrutiny.

Los Angeles Police Chief Michael Moore retroactively blamed the death of George Floyd in Minneapolis last week on protesters and looters in Los Angeles. Floyd's "death is on their hands, as much as it is on those officers'," he bizarrely claimed this week. Los Angeles County Sheriff Alex Villanueva said the curfew imposed on the nation's most populous county would "continue on a daily basis until the organized protests are gone." (He appears to have backed off tht threat on Thursday. Mayor Eric Garcetti, also a Democrat, closed every coronavirus testing site in L.A. on Saturday in response to destructive protests in some parts of the city the night before.

The New York-centric cable news media has done a better job of interrogating the actions of the NYPD and the shameful apologies of Mayor Bill de Blasio, especially after officers were caught by citizen journalists removing protective face masks to mace protesters and ramming police vehicles through large crowds. It has been particularly remarkable to watch the radicalization of CNN's Don Lemon on the issue of police violence, from Ferguson, Missouri, in 2014 through today.

Yet on countless occasions over the past week, news anchors and reporters have interviewed law enforcement officials without challenging them about the controversial cases out of their departments, or questioning how their officers have handled peaceful protesters. For example, Houston Chief Art Acevedo has been a ubiquitous police voice in recent days. Yet even as protesters demand justice for Breonna Taylor, an emergency medical technician killed in her home by Louisville police serving a no-knock warrant, Acevedo has scarcely been challenged during his numerous interviews about this controversial police technique. His department came under withering criticism after two Houston residents were killed as officers in that city served a no-knock raid on the wrong home in 2018. He was finally pushed on his own record by "Today" show host Hoda Kotb on Wednesday, after a video of protesters demanding answers from Acevedo went viral.

The most insidious and banal incidents of both-sides-ism are those that fail to provide an equitable presentation of both sides. For the countless amount of times police and reporters alike have spent describing vandalism as a violent crime, there has been virtually no voice given to the so-called rioters. Law enforcement in Minneapolis, New York and Dallas have fed the media incorrect information about "outside agitators," apparently seeking to undermine the organic community outrage filling their city's streets. At the same time, the media has remained remarkably uncurious about the fact that, as Salon's Andrew O'Hehir noted, "every single leftist protest movement of the last 60 years or so has been infiltrated and undermined to some degree by undercover cops or informants."

The police, especially in this moment of national crisis, have their own platforms. They are perfectly equipped to spread their copaganda without the aid of uncritical journalists. Social media accounts of police departments have continued to push out feel-good images — thank-you notes from local children and food donations from local businesses — even as militarized police agitate violent confrontations with their neighbors day after day and night after night.

CNN, CBS News and the Washington Post have repeatedly highlighted copaganda episodes, such as the ambiguous protest scenes where police have "taken a knee" or marched in supposed solidarity with their critics. These images of kneeling cops and embraces with civilians serve both to de-escalate righteous tension and falsely convey the idea that the purveyors of systemic violence empathize with their victims — oftentimes, right before they continue to inflict pain on them. It shouldn't be lost that already this week police in Vallejo, California, shot and killed a suspected looter who was kneeling on the ground with his hands up and police in Louisville shot into a crowd of protesters, killing an unarmed local business owner.

In fairness, I don't begrudge the instinct to hug cops, especially from people desperate to demonstrate their humanity. But the media is tasked with presenting all relevant facts and the full context of a story. What is happening in our streets right now is too important to give it the both-sides treatment. There is yet another cohort of high-school-age kids battling for their lives, more than eight years after young people rallied for justice for Trayvon Martin. We don't know how long this current movement will last, with schools out for summer (and perhaps into fall, in some places) and millions out of work. Media must not allow the police unlimited opportunities to get in a good PR moment in time for the evening news before they start beating people without provocation.

The good-faith examples of this are not found among the white cops who embrace traumatized black people, sometimes only to turn around and inflict the same violence they pretended to understand was unreasonable, but the black cops who have sacrificed their careers to stand for change. We need fewer examples of performative solidarity by police and more examples of something much more difficult: law enforcement self-policing to stop fellow officers from kneeling on someone else's neck.