“Get your f*cking knee off his neck”: Seattle officer forcibly removes fellow cop's knee amid arrest 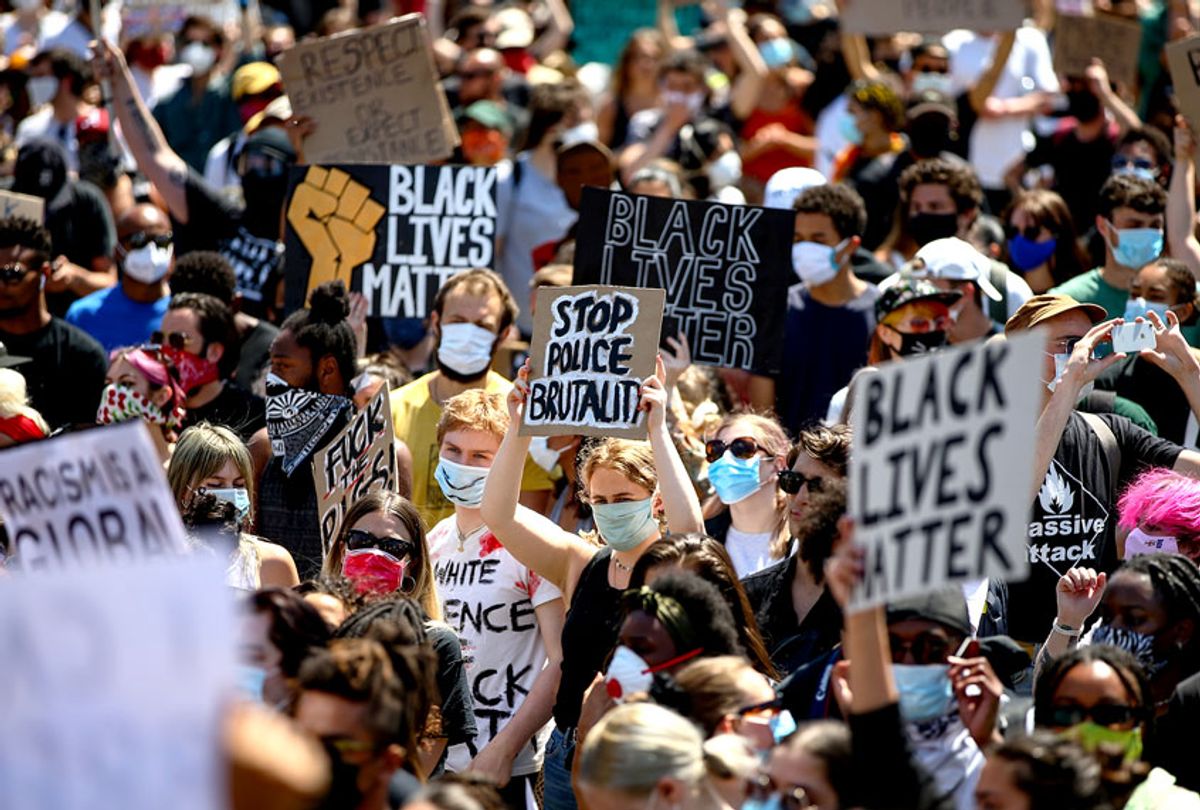 A viral video reportedly captured the moment a Seattle police officer kneeled on the neck of a protester demonstrating over the death of George Floyd before a colleague forcibly interned.

Protests raged in Seattle and more than 100 other cities over the weekend after former Minneapolis Police Officer Derek Chauvin was recorded kneeling on Floyd's neck for several minutes, including nearly three minutes after Floyd stopped breathing.

Reporter Matt McKnight on Saturday published a video, which shows a Seattle officer kneeling on a protester's neck in what appears to be a similar fashion as Chauvin.

"Get your f*cking knee off his neck," a bystander can be heard shouting as the cop pins his knee on the man's neck for about 13 seconds.

Another officer can be seen grabbing his colleague's knee and prying it off the man's neck after tapping him to stop.

Another video uploaded by McKnight appears to show the same officer kneeling on another suspect's neck moments earlier.

McKnight said the arrests happened after a group of protesters allegedly broke into a T-Mobile store.

"This person was one of the group of about 20 individuals who tried to escape when Seattle Police Department arrived on scene," McKnight told Business Insider. "If you watch the other video — full-length video — you can see the officer diverted from another arrest to get him."

Other disturbing images from the protest in Seattle showed a young girl in pain after she was allegedly maced by an officer.

The Seattle Police Department told BuzzFeed News that the incident was being investigated.

"Uses of force, including pepper spray, during the demonstrations will undergo a high level of scrutiny and review by the chain of command," Kelsey Nyland of the department's Joint Information Center told the outlet. "This incident in particular has been referred to the [Office of Police Accountability] and an investigation has commenced."

The Seattle Police Department said it had received a large number of complaints that it would "investigate," including "body camera footage for any of the officers in the vicinity."

"As the mayor made clear during today's press conference, all uses of force by SPD officers will be investigated accordingly, and officers will be held accountable for inappropriate uses of force," a police spokesperson told BuzzFeed. "Retaining and building community trust that SPD and partners have worked tirelessly to improve is absolutely paramount."

Seattle Councilwoman Kshama Sawant demanded that the city launch an independent community-led probe into police conduct at the protests, calling for the city to "discipline or fire all officers who taped over their badge identification and/or engaged in excessive use of force, brutality against protesters or other misconduct."

Seattle Mayor Jenny Durkan said the police would investigate the complaints but argued that "criticisms that somehow it was the Seattle Police Department [that caused] the violence and chaos" was "just false."

"I felt like I was being gaslighted" by the mayor's remarks, one protester told the Seattle Times. "It was not the experience I had."

"People were completely peaceful, chanting: 'No justice, no peace,'" added another protester. "Then at like 3:20 p.m., without provocation, there was a tear-gas canister fired into the crowd by the police and people started running."

New York Mayor Bill de Blasio also came under fire after he defended police officers seen running a vehicle into a crowd of protesters among a number of violent videos. Numerous reporters were also allegedly targeted by police across the country.

"On Saturday night, police in several cities ratcheted up their use of force — wielding batons, rubber bullets and pepper spray in incidents that also targeted bystanders and journalists," The Washington Post reported. "Video clips from the weekend showed that in some instances, police used force to clear streets, regardless of who was there or what they were doing."

The violence overshadowed many of the instances of looting and vandalism police ostensibly tried to stop.

"What we have seen in the United States over the last 48 to 72 hours is a nationwide 'police riot,'" wrote Salon's Andrew O'Hehir. "Something has been revealed here, which even the major voices in mainstream media cannot avoid. It isn't something about the possibly excessive, possibly regrettable protests or about their ambiguous racial dynamic, issues that until Saturday seemed to dominate the chattering-class social media discourse. It's about America's police, which increasingly resemble a lawless, authoritarian third force, largely unconstrained by political leaders, heedless of their own supposed rules and internally compromised by far-right or white supremacist ideology."