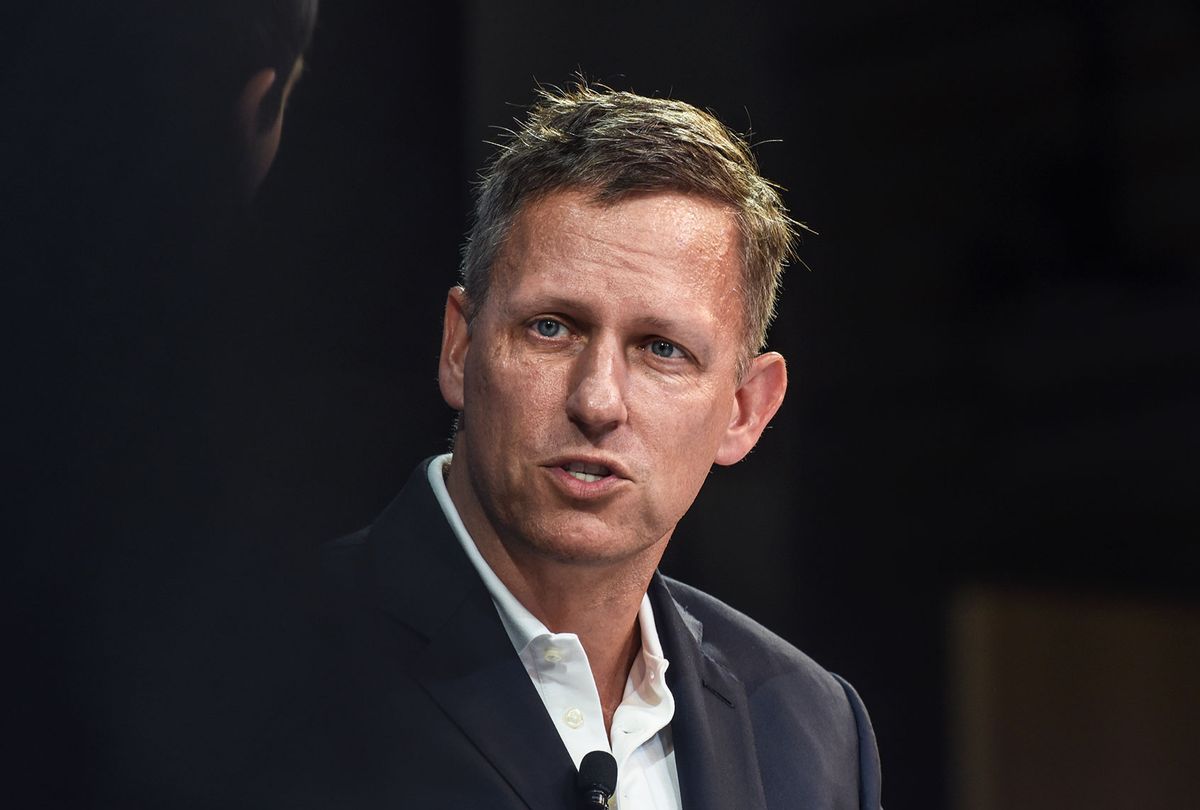 Billionaire Republican donor Peter Thiel is bankrolling election conspiracists and primary challengers against Republicans who backed Donald Trump's impeachment after the Jan. 6 Capitol riot, including an Arizona Senate candidate who is literally on his payroll.

Thiel, the Facebook board member who co-founded PayPal and later the controversial data-mining company Palantir, has long been a top Republican benefactor, donating millions to GOP candidates and political action committees. But in the wake of Trump's 2020 defeat, Thiel has grown more aggressive in his political investments, dropping more than $20 million to support two far-right Senate candidates and helping to fund primary challengers against Rep. Liz Cheney, R-Wyo., and other Republicans who called for Trump's removal after the deadly riot.

"He wants to be the patron of the Trump wing of the Republican Party," said Max Chafkin, a Bloomberg reporter and author of "The Contrarian: Peter Thiel and Silicon Valley's Pursuit of Power." Thiel is focused on building out "Trumpism after Trump," Chafkin said in an interview with Salon, describing the tech billionaire as "in many ways further to the right than Trump."

Thiel, who donated $1.25 million to back Trump in 2016, has made an even bigger splash this election cycle with a $10 million donation to back his protégé Blake Masters, who plans to run for the Republican nomination in next year's Arizona Senate election. Masters is uniquely connected to Thiel, serving as the chief operating officer of Thiel Capital, the billionaire's venture capital fund, and co-writing Thiel's book "Zero to One."

While candidates like Virginia's Glenn Youngkin have stepped away from their corporate careers to run for office, Masters appears to still be on Thiel's payroll. He earned $775,000 from Thiel Capital last year and received more than $340,000 in royalty payments from the sales of "Zero to One," according to a personal finance disclosure that was first reported by Insider. Masters did not respond to questions from Salon about whether he still collects a salary from Thiel's company, but still lists himself as the firm's COO on his LinkedIn page.

Thiel last month hosted a fundraiser for Masters' campaign at his Los Angeles home that cost up to $5,800 to attend.

"Mark Brnovich says President Trump is wrong on voter fraud. Really? Brnovich failed to convene a grand jury, certified Biden as president. Now he's nowhere to be found, making excuses … instead of standing with our president," the ad says.

Brnovich was one of multiple state officials, including Republican Gov. Doug Ducey, who certified the election results. The ad does not explain why Brnovich should have convened a grand jury. There has been no evidence of widespread fraud in Arizona or any other state, and courts have repeatedly rejected challenges by Trump allies seeking to overturn Biden's win.

The PAC also blasted Brnovich on Twitter, arguing that he is "nowhere to be found in the fight against voter fraud."

Masters is the "only candidate who will demand fair and transparent elections," the PAC said.

The Saving Arizona PAC recently made yet another six-figure ad buy attacking Brnovich for not being Trumpy enough.

Masters, who was endorsed by Trump's former national security adviser Robert O'Brien this week, has walked a fine line when discussing the presidential election. He has stopped short of claiming that the election was stolen outright, but has boosted conspiracy theories on Twitter about "dead people voting," Dominion voting machines and fears about election "integrity," echoing a trope employed by numerous other Republicans who have tried to distance themselves from the voter fraud lie while still trying to appease Trump loyalists.

After the dubious so-called audit in Arizona's Maricopa County actually showed Biden gaining a handful of votes compared to the official total, Trump and other Republicans began to claim that the audit had turned up serious questions about the election administration. In fact, Republican audit officials testified to Congress last week that the county held a "free, fair and accurate election." Masters, however, sided with TrumpWorld throughout the process, teasing the release of the audit report, echoing Trump's claims about "fake" polls and "anti-Trump disinformation," and making the evidence-proof argument that "no matter what the audit finds, we know this election wasn't fair."

Masters later demanded action from Brnovich in response to the audit, though he did not say exactly what he wanted the state attorney general to do.

"The AZ audit findings have been referred to the Attorney General," Masters tweeted. "The ball is now in Brnovich's court. He has a track record of doing the bare minimum, so let's pay attention, and we'll see if the Republican establishment is serious about election integrity."

Masters also demanded that Ducey immediately "call a special session" to impose new voting restrictions, even though Ducey had already signed a bill to restrict mail ballots and purge the state's popular early voting list in the spring.

"Get the legislature back to work so they can tighten up our election laws," Masters tweeted. "Starting with universal voter ID for every kind of ballot — nothing less is acceptable."

Masters did not respond to questions from Salon about whether he believes Biden legitimately won Arizona, or what he would like Brnovich to do in response to the "audit" results.

The attacks on Brnovich come as Masters seeks to close a massive early polling deficit against the attorney general. A Republican poll conducted last month showed Brnovich leading Masters, by 41% to 6%. Another September poll from OH Predictive Insights also showed Masters polling at just 6% and performing the worst of any candidate against incumbent Sen. Mark Kelly, a Democrat.

"It's clear Blake Masters is threatened by AG Brnovich," Joanna Duka, a spokeswoman for Brnovich, said in a statement to Salon.

Thiel has also dropped another $10 million to back J.D. Vance, another longtime business associate and the author of "Hillbilly Elegy," in Ohio's Senate race. As with Masters, Thiel has a long business relationship with Vance, who got his start in venture capital working at Thiel's Mithril Capital Management, which is named after a fictional metal in "The Lord of the Rings." Vance later got an investment from Thiel to help start his own venture fund, Narya Capital, which is named after one of the Elven rings in J.R.R. Tolkien's fantasy classic. Both men recently invested in the right-wing video platform Rumble.

Masters and Vance are "kind of extensions of Peter Thiel," Chafkin said, describing them as "hardcore ideologues" who are more disciplined and coherent than Trump, but largely focused on the same issues.

Vance has tried to stay away from election conspiracies but defended rioters at the Jan. 6 Capitol attack as mostly "super peaceful." Thiel's allies have generally avoided directly claiming that the 2020 was rigged, but have continued to raise irrelevant or baseless questions about the result.

"They're trying to walk a line and come up with some kind of intellectually respectable version of The Big Lie," Chafkin said, adding that the Thiel-backed candidates have tried to "cozy up" to hardcore Trump backers and "be perceived as friendly to them."

Thiel himself has also cultivated relationships in TrumpWorld. He developed close ties to former Trump campaign chief and White House strategist Steve Bannon, whom Chafkin described as Thiel's "ideological" ally who shares his views on the "deep state." Thiel routed his big 2016 donation to back Trump through the super PAC controlled by Rebekah Mercer, also a major donor to far-right Republicans. Mercer was a longtime patron of Bannon and his projects and has joined Thiel in funding Vance's Ohio campaign. Mercer has spent millions to support some of the leading proponents of Trump's election lies, as well as election objectors who fueled the Capitol riot.

More recently, Thiel met with Trump at the ex-president's Bedminster, New Jersey, resort and began funding candidates in support of the former president's revenge tour against pro-impeachment Republicans, according to Politico.

Thiel donated the maximum $5,800 to Harriet Hageman, the Trump-backed primary challenger to Rep. Liz Cheney, R-Wyo. Hageman has continued to claim that there are "legitimate questions about what happened during the 2020 election" and supported the Arizona "audit."

Thiel has also donated to Joe Kent, the Trump-backed primary challenger to Rep. Jaime Herrera Beutler, R-Wash., who also voted to impeach Trump after the riot. Kent spoke at the recent "Justice for J6" rally in Washington in support of the Capitol rioters charged in the attack. He vowed to lead a "full congressional inquiry" into the 2020 election if elected. Kent was among a group of Trump supporters who filed lawsuits last month in Washington state accusing multiple counties of "flipping votes" and calling for a "full forensic audit" of the election.

Thiel's funding for candidates pushing election lies is "totally consistent" with his embrace of Trumpism, Chafkin said. Though Thiel ultimately decided not to donate to Trump in 2020 out of frustration about the former president's "perceived competence," the billionaire has sought candidates who will pursue Trump's hardline policies on immigration, relations with China, regulation of tech companies, "political correctness" and globalization.

On all those issues, Thiel "basically agrees" with Trump, Chafkin said. "He wants to be involved in this movement and what you're seeing now is he's making that play. He's trying to be the main patron to his part of the Republican Party."