Steve Bannon's second act: He's back, and he wants to bring down the curtain on democracy

Maybe you thought "Trump's brain" was off the political stage forever. But he's back — and now he smells revenge 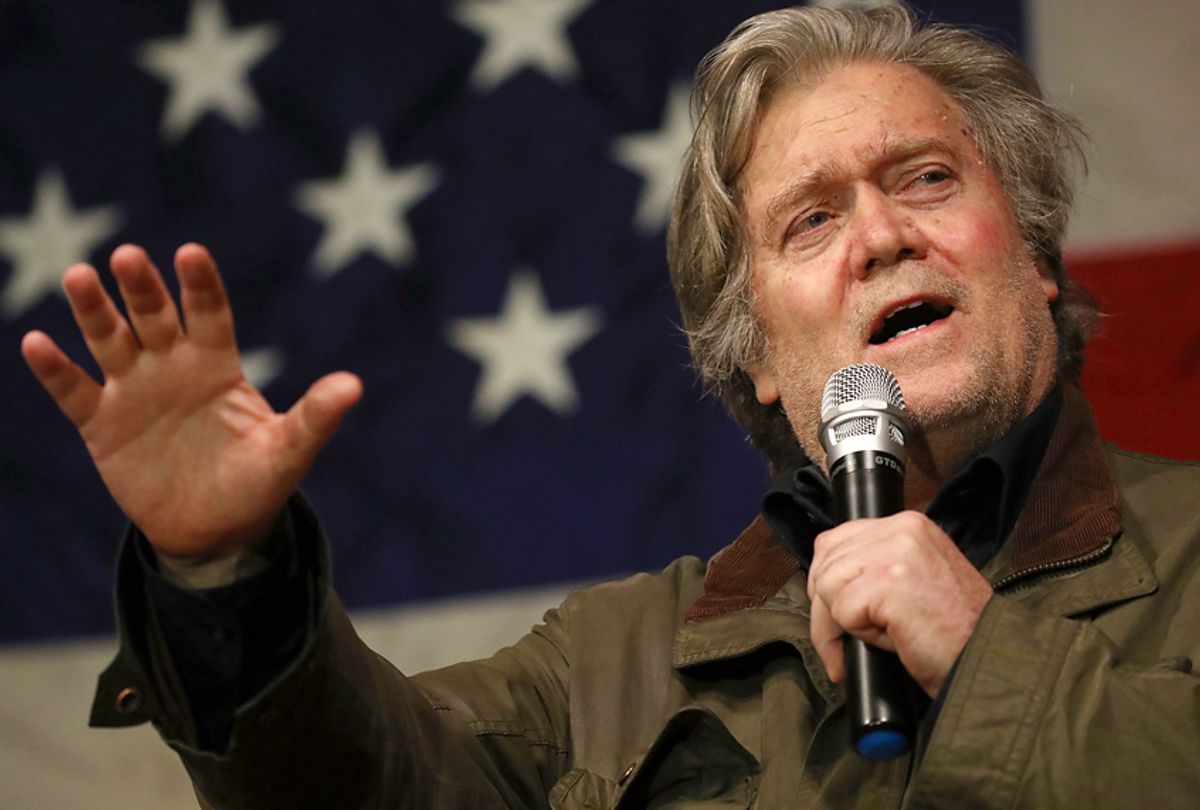 In the trailer for the new season of the horror-thriller series that is American politics, the screen goes black and ominous music begins to play. In bright white letters the first words appear on screen: "They thought he was gone. They thought he was defeated. They said he would never be back — but he was here all along." Then, after a pause: "Steve Bannon is back for revenge!"

For several years, beginning with the 2016 campaign, the American and global news media was obsessed with Steve Bannon. This was at least somewhat justified: Bannon was considered to be Donald Trump's "brain" and the mastermind behind his unlikely victory over Hillary Clinton. Bannon accomplished this through what many viewed as a "shocking" and "brilliant," if nihilistic, political strategy that leveraged right-wing populism, racism and the subterranean longing for an authoritarian leader.

Before that, Bannon was also executive chairman of Breitbart News, an influential propaganda outlet for right-wing authoritarians, white supremacists and the so-called alt-right. He rode that success to a role steering Trump's presidential campaign to victory and then to the White House, where he served as Trump's senior strategist — for all of seven months. Bannon was purged from the Trump regime after serving as a source for Michael Wolff's book "Fire and Fury," and appeared to be persona non grata with the famously touchy president.

But in the years since then, Bannon has repeatedly demonstrated his loyalty, and has been rewarded for it. Last year, he was charged with wire fraud and money laundering for stealing money from a charity whose proceeds were supposed to be used to build Trump's misbegotten wall along the U.S.-Mexico border. Trump pardoned him, and apparently all is well between them.

Bannon has been in the news this week: He may be charged with criminal contempt by the House committee investigating the Jan. 6 Capitol assault, and he hosted an event in Virginia on Wednesday night where attendees reportedly recited the Pledge of Allegiance before a flag used in that insurrection.

It does indeed seem likely that Bannon appears to have played a key role in the events of Jan. 6 and perhaps also in Trump's overarching coup attempt. On a recent episode of his podcast, Bannon admitted to telling Trump, prior to that date,  "You need to kill this [Biden] administration in its crib."

Bannon has also made repeated use of the technique known as stochastic terrorism to encourage right-wing violence, while disclaiming personal responsibility. As HuffPost reports, he recently told his listeners of his "War Room" podcast: "We need to get ready now. We control the country. We've got to start acting like it. And one way we're going to act like it, we're not going to have 4,000 [shock troops] ready to go, we're going to have 20,000 ready to go."

Bannon has said these "shock troops" would be used to destroy the federal government from within in a second Trump administration, as a way of tearing down what he calls "the administrative state," an anti-government euphemism that also includes multiracial democracy.

Political scientists, historians and others have shown that such rhetoric is used by Republicans and their allies (and by too many "moderate" or corporate-sponsored Democrats) to justify attacks on the very idea of government itself, in large part because they perceive it as serving the interests of Black and brown people and others deemed to be "undeserving."

Bannon's use of violent language about "shock troops" — in a military context, this means heavily armed, fast-moving elite soldiers used to break through enemy defenses — is not necessarily hyperbole or metaphor. Rather, it should be seen as part of a larger embrace of political violence and other terrorism by the Republican fascist movement.

Bannon has reportedly described himself as a "Leninist," and makes no apologies for his belief that the existing social and political order must be destroyed before it can be rebuilt according to his reactionary, revanchist, neofascist and racist authoritarian vision.

Bannon has said that in a second Trump term he wants to see Trump's "enemies," such as Dr. Anthony Fauci and FBI Director Chris Wray, decapitated, with their heads mounted on stakes. Again, it's a mistake to consider this a joke. Business Insider reports:

"Second term kicks off with firing Wray, firing Fauci," Bannon responded, in comments which were reported on Thursday by Media Matters.

"I'd actually like to go back to the old times of Tudor England, I'd put the heads on pikes, right, I'd put them at the two corners of the White House as a warning to federal bureaucrats. You either get with the program or you're gone — time to stop playing games. Blow it all up, put [Trump aide] Ric Grenell today as the interim head of the FBI, that'll light them up, right."

Bannon has also praised the white supremacist fantasy novel "The Camp of the Saints," which imagines a violent crusade against Muslims and nonwhite people who are supposedly "invading" Western Europe and other "white" countries. As public opinion polls have shown, these "white genocide" fantasies are increasingly credible to Republicans and Trump supporters, and play a key role in why Republicans are willing to support right-wing terrorism and other political violence as seen on Jan. 6.

Oscar-winning documentary filmmaker Errol Morris spent many hours with Steve Bannon while making his 2018 film "American Dharma." Morris told me at the time that what he felt in Bannon, at "the deep center of it all," was "the desire to destroy stuff, the desire to wipe everything out without any kind of constructive program."

If Donald Trump manages to rig the 2024 presidential election — or even wins it legitimately, unlikely as that seems — he will indulge in many forms of vengeance and destruction. Whether or not Bannon rejoins Trump in an official capacity, he will be at his side, urging him onward.

Who else might return in a second Trump regime? Perhaps criminal and traitor Michael Flynn, in charge of the CIA, the Department of Defense, the NSA or some other key element of the country's national security state. Perhaps Sidney Powell, Jeffrey Clark or Rudy Giuliani, in control of the Department of Justice. The Supreme Court and the larger federal judiciary has largely been captured already by right-wing Christian theocrats.

Most or all of the U.S. government would become an appendage of Trump's malignant narcissism and other pathologies, shaped to his ultimate goal of being America's first dictator for life.

I feel like we're at a really critical and very dangerous inflection point in our society, and if Trump — this is not on an ideological basis, this is just purely on an observational basis based on the larger international historical context — if he makes a successful return to the presidency in 2024, democracy's done.

The American people have been warned, again and again. They need to vote, organize, mobilize, engage in corporeal politics — including strikes and direct action — and raise up civil society and other pro-democracy groups and organizations. They must force Joe Biden and the Democratic Party to act with the "urgency of now" in the battle against the Republican-fascist movement. They must act as though their lives, and the future of their country and democracy, depend on the choices they make now – because they do.