The latest "You" makes a killing in the 'burbs, fulfilling the dark fantasies we'd rather ignore

In a town of hot mamas, Penn Badgley's bookish serial killer tries to settle down — but a toxic world won't let him 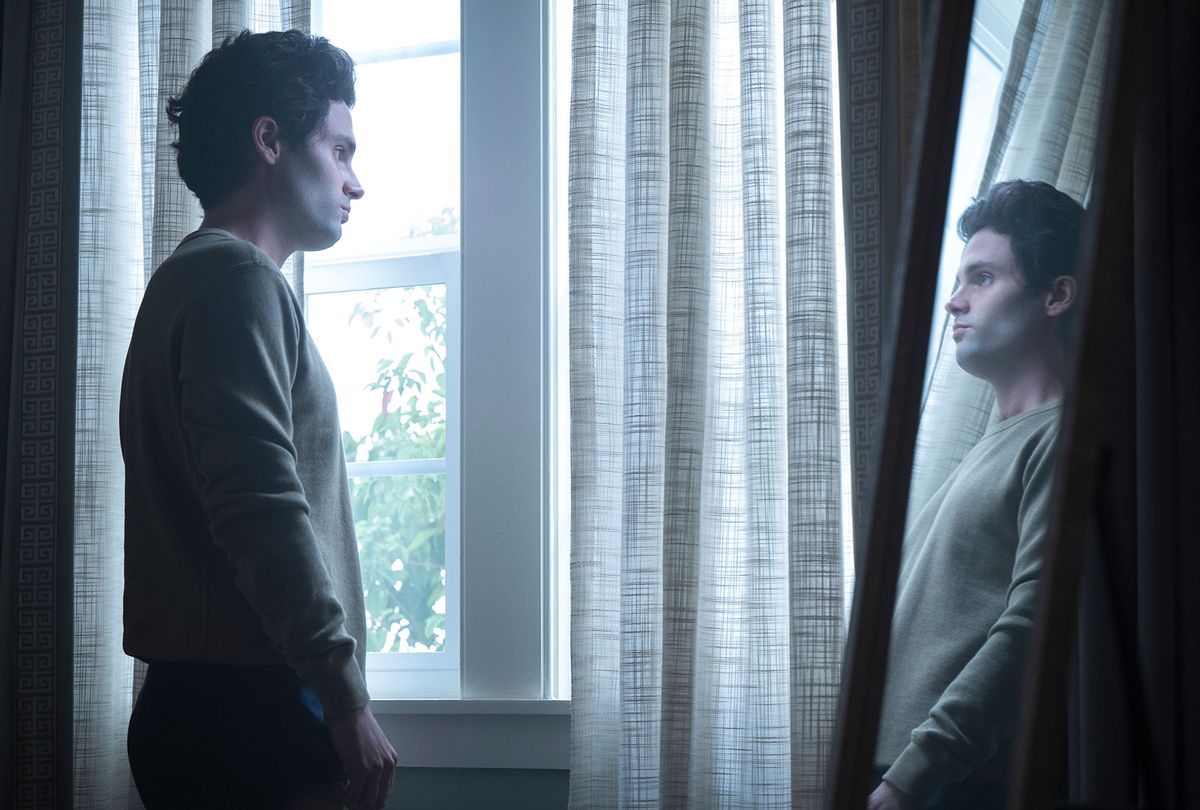 Penn Badgley as Joe Goldberg in "You" (JOHN P. FLEENOR/NETFLIX)
--

With each new season, "You" moves to a new locale, and its serial killer (protagonist? Antagonist? How one characterizes Penn Badgley's Joe Goldberg in its third season is up for debate) attempts to start fresh.

In any case, with each new place, Joe tries to transform — and not necessarily for the better.

"You" is a thriller that behaves like soap populated with shallow, beautiful people. What makes it stand apart from other is that the terrible, gorgeous characters who aren't Joe or his new wife Love (Victoria Pedretti) are there to be reaped and bled.

Then again, that's what Joe and showrunner Sera Gamble want us to think. Nearly every aspect of the story filters through the killer's perspective, or one adjacent to it. Joe is the hero, pursuing the maiden fair, the man of her dreams lurking on the periphery, waiting for her to notice how wonderful he is. Each time, Joe chooses a fresh object to chase, his very own new "you."

If one were to observe the action from the point of view of another character Joe would be an emotional grifter swooping in to play the part of the rescuer — the white knight — to be everything a lonely, slow-to-trust woman needs. This is the nature of his pathology: he believes in true love as it is described in great literature. He believes in finding The One and has faith that she will be perfect, everything she needs. Should that object of his desire fall short of his expectations … she'll simply vanish. And the hunt renews.

Marriage doesn't change that pattern, which fits the third season's identity shift and reiterates how equally important the current crime scene to who Joe is trying to be. And in this show, the scene of the crime is an entire city.

The first season in New York, which aired on Lifetime, introduces Joe as a bookstore clerk in love with hardcovers and paper pages in a world quickly going the way of short takes and Kindles. Books define romance for Joe. The Internet is for researching and reading people – their habits, weaknesses, and movement patterns. New York is a perfect place to meet-cute and ditch a girl in a ditch.

Los Angeles, the stage for season 2, is the land of stage names and rewrites. This is where he meets Love, a sunny chef working at a gourmet grocery store her family owns who happens to share his fixation with homicide. Before Joe can end their relationship for all time, she announces she's pregnant.

Now, in the third season, we've been brought to the suburbs, and the show is given renewed purpose: catharsis. Madre Linda is a hive of keto-worshipping, gluten-phobes run by gossipy, two-faced momfluencers and self-important tech millionaires.

Loosely translated, Madre Linda means "hot mama," clever trolling of Love's insecurities. But the suburb's name also announces the place's shared sense of superiority and separateness — that its residents are somehow better because they've figured out how to engineer their fortunes, their bodies and their attitudes to an elevation above the masses.

The second season ends with Joe glimpsing the next-door neighbor Natalie (Michaela McManus), who is a supermodel smoke-show, bored and ready to cheat on her emotionally distant tech CEO husband (Scott Speedman). That's the first problem. Joe tells himself that he murders to protect his obsessions, you see. Love kills when she feels threatened. Joe enjoys the long game, the stealthy hunt. Love is impulsive. This "nest full of narcissistic vipers," as Love calls it, might as well be asking for her to unleash her rage on it. At least the schools are top-notch.

"You" is a sly guilty pleasure as such things go. Joe's prolific and wry inner dialogue narrates and critiques the action, ensuring that we see him as weird, funny, appealing, carnal, sexy and menacing. He sweet talks our darker impulses in a way that makes his murders justifiable, understandable even, although we – and he – know his compulsions are immoral.

That makes him a spiritual relation to Dexter Morgan, Showtime's famed anti-hero serial killer who is also making a return this year. Following in Dexter's footsteps, Joe and Love are married and on their way to becoming parents. Impending fatherhood enables Joe to style a new dream and a better identity for himself – the heroic, protective father to an innocent little girl. Pure perfection.

None of that goes as planned.

Examining the challenges of marriage and parenthood through the lens of two psychopaths is probably entertaining enough for the show's passionate fanbase.

Strip away the frilly ideals about giggling babies after and white picket fences, and maintaining a successful long-term relationship boils down to nonglamorous operating concepts like teamwork, sacrifice and compromise. Joe wants to live up to those truths and the beast inside him resents that effort.

By insinuating themselves into the community, they encounter a variety of suitable targets who — let's face it — most people won't mourn. Everyone in Madre Linda shapes their lives around an awareness that they're being watched, surveilled, and judged. Keeping up appearances matters less than absolute acceptance, determined by a cartoonish clique of women who run blogs with names such as "Heart-Shaped Mistakes."

Gamble and the writers created this season during the pandemic, which explains why and how the denizens of Joe and Love's new home in the wealthy California town of Madre Linda are designed to be suitable prey. Nosy neighbors who spread hateful rumors in one moment and turn into amateur true crime detectives when their target turns up dead? How about the anti-vaxxer family spreading a deadly virus to an infant? Abusers using their connections to rig the justice system against women lacking means to hire decent legal representation, or parents bribing admissions boards to get their average children into the best universities? Sure – each of them can spend some time in Joe's plexiglass cell.

"You" has a lot of fun hanging the sins dominating the culture's conversations on the shoulders of characters born in the writers room to die onscreen. But its sharpest slices are reserved for its ongoing dialogue with corrosive masculinity and the demon needling Joe, which is the urge to assert control in a place where he's powerless.

The latest incarnation of Joe wants to control himself and his world by trying to control his wife — who, to be fair, is precariously unhinged.  She's also an extreme version of all the women she's wary of. Like most of them, she's white and rich enough to view work as a hobby. But while they're busy taking yoga and murdering their Peloton workouts, she is figuring out whether the man she'd kill for is doing things behind her back that — in her eyes — justify bludgeoning someone to death.

Self-actualization has been branded into a virtue, and while it's not necessarily a terrible pursuit in the wrong hands – like, say, a dominant Adonis who strangles squirrels to signify his masculinity — it can destabilize an entire social ecosystem. Joe is not that man, and that's the secret to his continued appeal as the face of "You." He's the wrong kind of man in a sea of them, a principled romantic whose might change, but whose loss of affection can be lethal.

The genius of Love is that she's equally dangerous, making it more worthwhile. The scary part is that she means it when, in response to an unexpected token of affection, she thinks to herself "I don't deserve him!" and her tone is sweetened with affection.

In the same moment, Joe has an identical reaction. "I don't deserve her," Joe thinks at the same time, but resentfully. He's captured his quarry, and, as it turns out, she has him trapped. The frightening titillation vibrating behind this exchange is that we know he's already stalking someone else, and we can't tell whether the man or his wife is the greater threat.

The third season of "You" is now available to stream on Netflix.