With one UN speech, Powell helped usher in the era of a GOP driven by lies and conspiracy theories 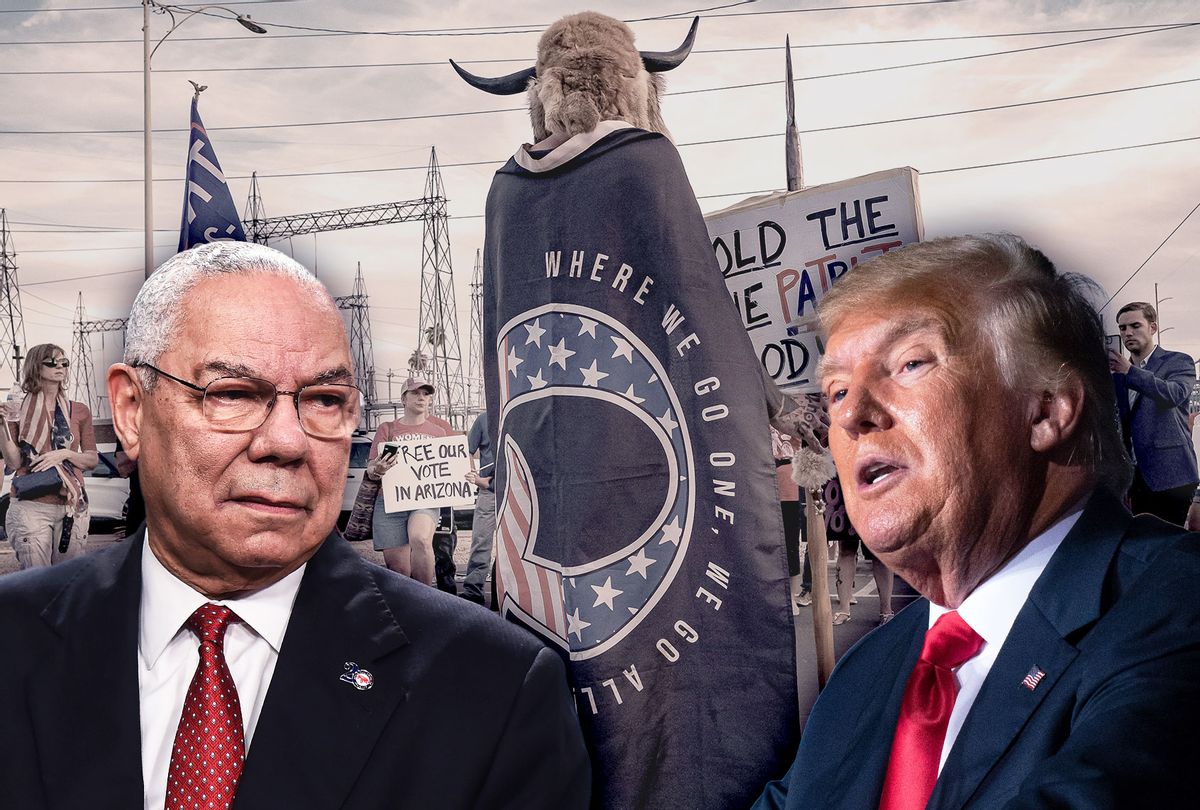 On February 5, 2003, Colin Powell gave the most important speech of his life. He argued before the United Nations that the George W. Bush administration should invade Iraq based on a bunch of evidence-free accusations that Iraqi president Saddam Hussein was developing weapons of mass destruction (WMDs). The theory drew heavily on a logical fallacy that then-Secretary of State Donald Rumsfeld was fond of: "Simply because you do not have evidence that something exists does not mean that you have evidence that it doesn't exist." Throughout the speech, Powell suggested that the lack of evidence for weapons development simply showed that Iraq was really good at hiding weapons, as opposed to what it should have been seen as: a lack of evidence, and thus a lack of justification for war.

Powell famously didn't want to give the speech. But Vice President Dick Cheney wanted it, knowing that they could leverage Powell's stellar reputation to put an ennobling face to a pack of insinuations and evidence-free claims. So Powell did it.

The fallout from that decision was ghastly.

An estimated 600,000 people died due to the invasion of Iraq. Over $2 trillion was spent on Bush's quagmire adventure. And, unsurprisingly, as soon as the invasion was underway and the "weapons of mass destruction" nonsense was no longer needed as a justification, the Bush administration dropped the pretense like a hot potato.

The sociopolitical impact in the U.S. is harder to measure — but still catastrophic.

Eighteen years after Powell's speech, it's clear that the Bush administration's embrace of conspiracy theories over evidence has had a lasting influence on not just the Republican party, but the conservative base. After all, if you can lie your way into a war, then why not lie about whatever you want? It's not at all hard, therefore, to draw a direct line between the vortex of lies and conspiracy theories that led to the Iraq War to Donald Trump, the rise of QAnon, or the widespread GOP embrace of wild conspiracy theories on every topic from whether the 2020 election was stolen (it wasn't) to whether COVID-19 vaccines are safe and effective (they are).

Powell died on Monday from COVID-19, and the mainstream press is awash in hosannas for the man. It's as if his reluctance to go to war somehow counts more for the fact that he ultimately took immoral actions that led to catastrophic results. In reality, Powell's highly touted trepidation prior to the Iraq War should be taken with a grain of salt, as MSNBC editor Zeeshan Aleem succinctly pointed out on Twitter.

Left: Colin Powell threatened to resign over homosexuals serving in the military.

Right: Colin Powell telling a journalist that despite misgivings he "didn't have any choice" but to support Bush in the case for invading Iraq, a decision he never threatened to resign over. pic.twitter.com/rA1eMjN2Hd

As I note in Tuesday's Standing Room Only newsletter, there's a dark irony in the cause of Powell's death. The continued severity of the pandemic is due to forces that Bush and Cheney — with Powell's help — unleashed in the early part of this century. For instance, the DNA of the GOP's war on vaccination can be traced back to the Iraq War propaganda. There's the same dismissal of expert consensus and material evidence in favor of speculation. Vaccine opponents dismiss research showing that vaccines are safe in favor of wild claims that there might be side effects science hasn't yet discovered. It's very reminiscent of the tactic that war propagandists took when they dismissed weapons inspectors who showed no evidence of weapons development in Iraq by asking if they'd looked in every barn and apartment in the nation.

Powell was vaccinated. He likely died because his already poor health made the vaccine's protections inadequate. His death should be a reminder that vaccine refusal doesn't just endanger those who refuse the vaccine. The unvaccinated are the ones spreading this virus, making it far more likely that breakthrough infections like Powell's will happen. And it's all due to right-wing leaders cynically embracing anti-vaccination conspiracy theories for political gain, just as they cynically embraced conspiracy theories about Iraq and weapons of mass destruction in the early aughts.

There can also be no doubt that Trump's success as a politician owes quite a bit to the Bush years and the normalization within the GOP of lying for political gain. (Not that Trump shows any gratitude.) Trump's lying tactics owe quite a bit to the strategies Bush and his allies used in those years. As laughable as it is, Trump's speculation that bleach injections might be a miracle cure for COVID-19 owes a lot to the tactics that Powell used in his famous U.N. speech, particularly his prioritizing of what-ifs and fantasies over the cold, hard facts turned up by experts.

The echoes of "WMDs in Iraq" are especially prevalent in Trump's Big Lie.

To Big Lie proponents, it doesn't matter that there's no evidence for widespread voter fraud any more than it mattered to the Bush administration that there was no evidence of WMDs in Iraq. The Big Lie is entirely structured around the Rumsfeldian assertion that the inability to prove a negative is blanket permission to do whatever terrible thing you want to do. Want to invade a sovereign nation or overthrow your own country's democratic election? Why do you need proof for your allegations? All you need to do is say it's theoretically possible that the proof is out there — of WMDs in Iraq, of a fraudulent vote in Detroit — and voila! It's as good as actually having the proof.

Even QAnon, a right-wing cult built around evidence-free assertions that Democratic leaders are involved in a worldwide pedophilia conspiracy, owes so much to the Bush years.

The first political blogs, unfortunately, rose up largely to defend the Iraq War and perpetuate conspiracy theories about weapons of mass destruction in Iraq. Looking back, it's easy to see how these blogs — some, like Gateway Pundit, which are still out there spreading lies today — laid the groundwork for what we have today, which is an increasingly wild-eyed, anti-reality right-wing driven by social media conspiracy theories.

In the wake of Powell's death, the usual Beltway hacks are contrasting him with the ugliness of the GOP in the Trump era. And sure, it was good that Powell occasionally spent his later years speaking out against what the Republican Party has become. But Powell never really took responsibility for his role in helping turn his own party into an authoritarian movement that sees truth as little more than an obstacle to be stomped out in the rush to power. Colin Powell played a momentous role in the radicalization of the Republican Party and that, more than anything else he did, remains his most important legacy.