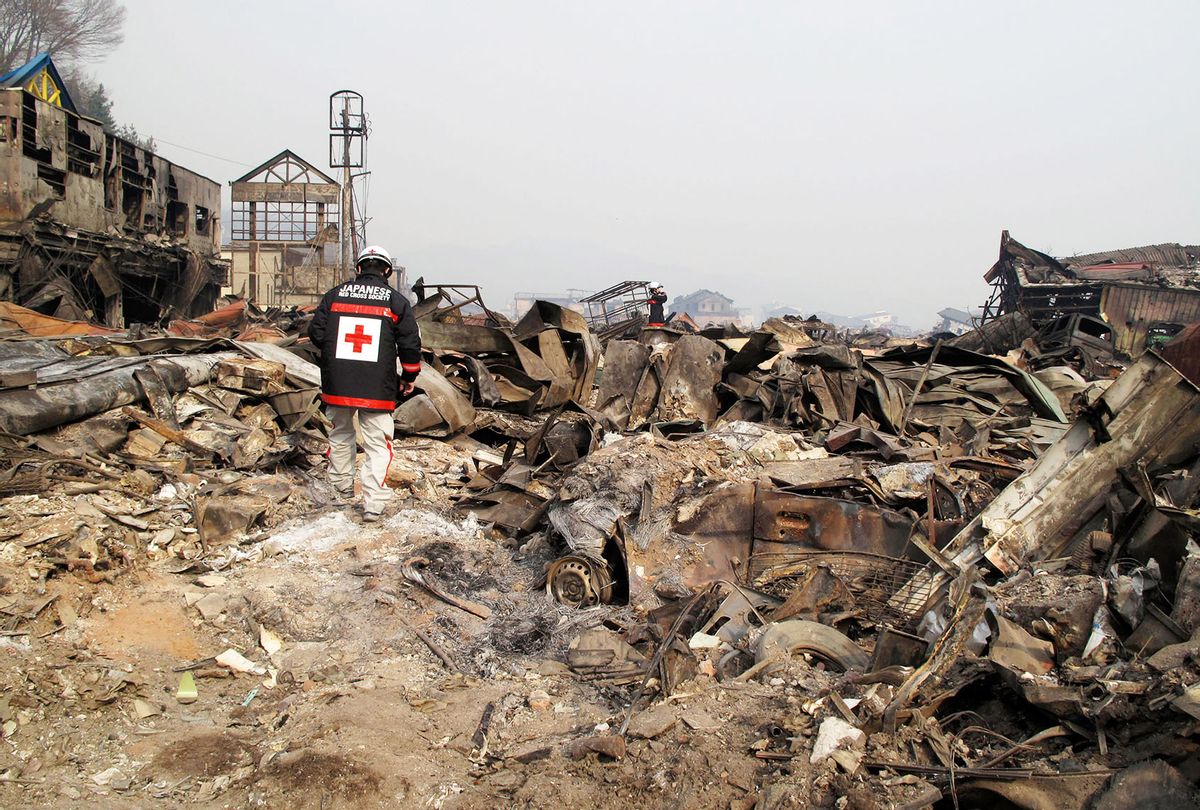 In this handout images provided by the International Federation of Red Cross Japan, A member of the Japanese Red Cross team walks through what is left of the city of Otsuchi, after an 9.0 magnitude strong earthquake struck on March 11, off the coast of north-eastern Japan, March 14, 2011 in Otsuchi, Japan. The quake struck offshore at 2:46pm local time, triggering a tsunami wave of up to 10 metres which engulfed large parts of north-eastern Japan. On Tuesday there was a third explosion from the Fukushima Daiichi nuclear power plant causing fears for the radiation levels being emitted from the plant. (Patrick Fuller/Japanese Red Cross/IFRC via Getty Images)
--

Radioactivity is one of humanity's deepest existential fears, perhaps because unlike most existential threats, it is invisible. Vast swathes of the region around Chernobyl and Fukushima, site of the two most prominent nuclear power plant accidents in human history, have become "exclusion zones" — vacant of human habitation for fear of radiation-induced diseases, like cancers and leukemia.

Yet while humans have sacrificed productivity and livelihood to flee from radioactivity, animals seem less convinced of the negative biological consequences. And animals that have repopulated some radioactive areas don't seem very stirred, a new study finds.

In a piece published by the journal Environment International, scientists and graduate students from Colorado State University and the University of Georgia worked with Fukushima University's Institute of Environmental Radioactivity to study wildlife within the Fukushima Exclusion Zone. This area is so called because, after the Fukushima Dai-ichi Nuclear Power Plant was destroyed by the Great East Japan Earthquake and Tsunami in 2011, it released massive quantities of radiation into the environment.

While more than 150,000 people were evacuated from an area of roughly 444 square miles, a wide variety of flora and fauna remained behind. They continued to live in that area for multiple generations, offering scientists a fantastic opportunity to study the effects of lifelong radiation exposure.

And what they learned was quite surprising.

Scientists studied biomarkers of DNA damage and stress in populations of wild boar and rat snakes that lived in the Fukushima Exclusion Zone. Those biomarkers were chosen because they were the most telling signs of radiation's consequences on animals.

Interestingly, researchers failed to find any significant adverse health effects, even though they collected their samples between 2016 and 2018 — only five to seven years after the nuclear accident. These findings are especially significant in the case of the boars, because pigs are anatomically similar to humans. That suggests that humans may not need to be as fearful as they currently are about moving back into exclusion areas.

The study also has some interesting implications about what causes stress in animal populations. Because the boar and snakes receive large doses of radiation through the soil — one because of rooting, the other due to slithering — scientists looked at whether the telomeres or "caps" at the ends of their chromosomes had shortened; or, whether board had elevated levels of the stress-correlated hormone cortisol. Neither the boar nor the snakes showed signs that their telomeres had shortened because of radiation, and the boars' cortisol levels were quite low.

"It's similar to what they're seeing in Chernobyl," Colorado State University Professor Susan Bailey, senior author on the paper, explained in a statement. "The animals are flourishing mostly because there aren't people around, and they don't experience the related stress that brings."

Bailey was referencing the Chernobyl Exclusion Zone, an area in Ukraine that was evacuated after the Chernobyl Nuclear Power Plant disaster in 1986. Some biologists regard Chernobyl's exclusion zone as an ecological success, as plants and animals have flourished in the absence of humans. Deer, lynx, bison and other animals are thriving in the area around the plant, and enough vegetation has sprouted up that a thick forest now exists. There are so many wolves in the Chernobyl Exclusion Zone that by the 1990s they had become a nuisance to local farmers.

The Ukrainian government is now leaning into the Chernobyl example as a fantastic case of real-life rewilding and is trying to learn more about its unintentional ecological experiment. Meanwhile the Chernobyl Exclusion Zone has become the third-largest nature reserve in mainland Europe, albeit entirely by accident.

Even so, the prospects for Chernobyl area wildlife are not entirely rosy, a fact that may prophesy the future of wildlife near Fukushima, too. In 2003, a study found that two species of irradiated worms near Chernobyl had altered their sexual behavior, in many cases becoming more prone to sexual reproduction than asexual reproduction. Likewise, a 2001 study published in the journal Biological Conservation found that the mutation rate of animals and plants in the region had increased by a factor of 20 due to lingering radioactivity from Chernobyl.