Sinema's giant flip-flop: She once campaigned on issues she now wants dropped from Biden’s plan

Sinema now pushing to save Trump’s tax cuts, after calling for corporations and the rich to “pay their fair share” 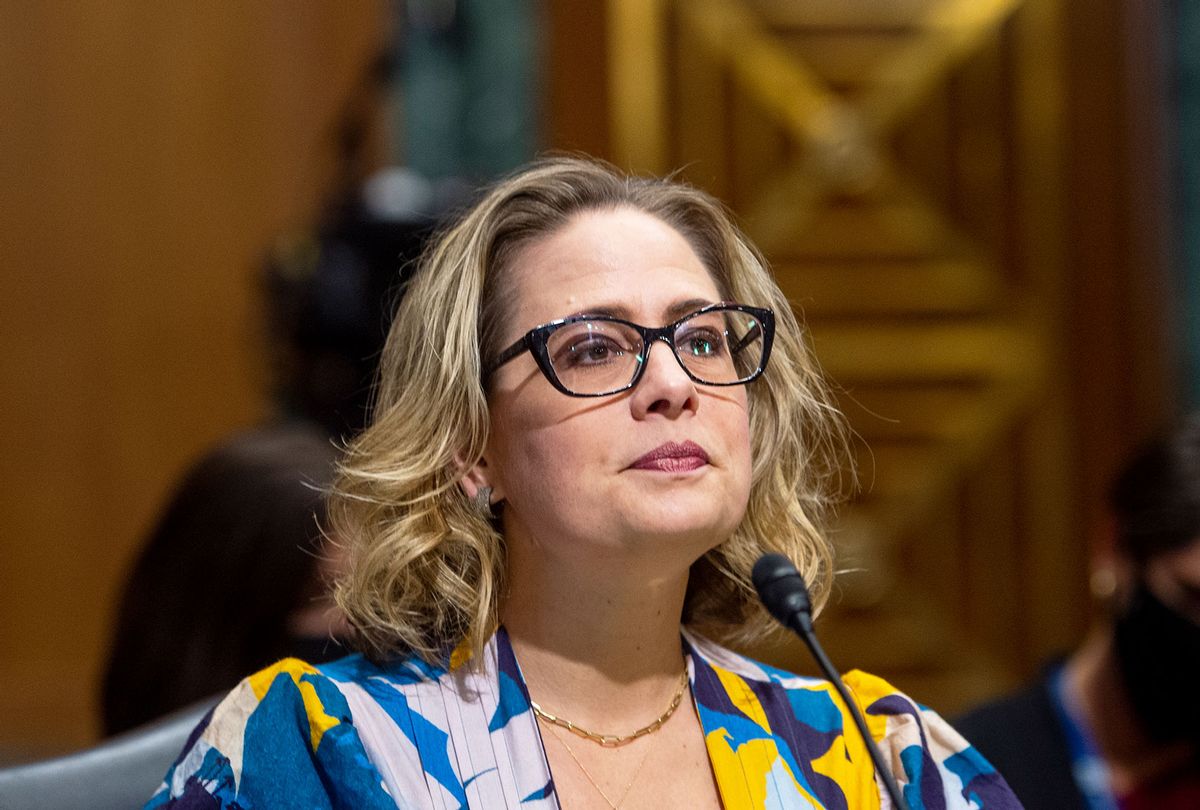 Sen. Kyrsten Sinema, D-Ariz., perhaps the main obstacle to passing President Joe Biden's Build Back Better plan, campaigned on many of the key issues that she now wants dropped from the proposal. Indeed, her opposition threatens to sink other measures she has supposedly supported for years.

Sinema balked at Biden's proposed $3.5 trillion price tag and is reportedly dead set against Democrats' proposals to partly roll back the Trump administration's tax cuts for corporations and the wealthy and to allow Medicare to negotiate prescription drug costs. It's a remarkable reversal for a former Green Party activist who campaigned for the Senate in 2018 on lowering drug costs and has repeatedly called for the wealthy to "pay their fair share" throughout her career. Sinema has criticized Democratic leaders for making "conflicting promises" on Biden's big legislative package, but Arizona progressives who are now pushing a potential primary challenge in 2024 say she's the one who broke her campaign promises.

In her successful Senate campaign three years ago, Sinema made prescription drug costs a key part of her platform.

"No family should be bankrupted by medical bills. We need to make health care more affordable with access to the lowest cost prescriptions," she said in a 2018 campaign ad.

Sinema, who has often discussed growing up in a financially struggling family, cited that experience during a 2018 interview to argue that parents shouldn't have to "choose between paying the rent and getting medicine for their kids."

She continued to push the issue after her election, writing an op-ed last year vowing to fight to "make prescription drugs more affordable."

"Congress must address the cost of prescription drugs," she wrote. "Today, even Arizonans who have insurance sometimes struggle to afford the medicine they need. That's why I'm pursuing policies to ensure life-saving drugs like EpiPens and insulin are affordable and available to Arizonans — especially our seniors."

Democrats crafted a proposal to allow Medicare to negotiate lower prescription drug prices and raise $450 billion to pay for the other programs in the BBB plan, even drawing support from Sen. Joe Manchin, D-W.Va., who is no fan of the overall package. But Sinema, who has raised more than $750,000 from pharmaceutical and medical device firms, including over $120,000 since her election, reportedly told the White House that she opposes the proposal. Other Democrats with deep pharmaceutical ties have introduced a far more limited bill that reduces the number of drugs that Medicare can negotiate — but Sinema has apparently balked at that proposal as well.

The prescription drug provision is one of the most popular parts of thge BBB package. About 83% of the public, including 91% of Democrats and 76% of Republicans, support the plan, according to a new poll from the Kaiser Family Foundation.

"At a time when the drug companies are charging us by far the highest prices in the world, Congress must demand that Medicare negotiate prices with this extremely greedy and powerful industry," Senate Budget Chairman Bernie Sanders, I-Vt., said in a statement last month. "Year after year, the pharmaceutical industry makes extraordinary profits and provides their CEOs with obscenely high compensation packages. Meanwhile, one out of five Americans cannot afford the prescriptions their doctors write, and thousands die each year because they lack the money to buy the medicine they need."

Sinema, who previously served in the House, also previously called to hike taxes on corporations and the wealthy before seemingly dropping that issue entirely and pushing to preserve the 2017 Trump tax cuts.

"Asking big corporations & the rich to pay their fair share is common sense," she wrote at the time, "not class warfare."

Sinema drafted a jobs plan during her 2012 congressional campaign, calling to end the Bush-era tax cuts on the rich, in favor of funding investments to spur economic growth.

"I believe that it is time to let tax cuts and loopholes that favor the rich in the upper income tax brackets be eliminated," she wrote.

Democrats hope to fund many of Biden's initiatives by partially rolling back Trump's tax cuts on corporations and raising the top marginal tax rate on top earners, an idea that has drawn support from Manchin. But Sinema, who has raised more than $900,000 from industry groups and corporations opposing the tax increases and has continued to hold fundraisers with groups opposed to the bill amid negotiations, has ruled out any tax increases on corporations and the wealthy. "I do not think anyone in the caucus believes that to be a tenable position," a Democratic Senate aide recently told Insider.

Her opposition to key proposals to raise revenue to pay for the rest of the package, which even Manchin supports, threatens to derail the entire Biden agenda.

"Manchin and Sinema want very different things, both in terms of revenue and programs," a Biden ally told Politico. "If you just took their currently presented red lines … it wouldn't raise enough money and it wouldn't do enough big programs."

If Sinema's opposition sinks the bill, it would essentially also torpedo many of the other policies she ran on.

Sinema in her 2012 jobs plan called to expand the child tax credit, echoing that position in 2019 while also pushing for paid parental leave, both of which are in Biden's proposal. The BBB would also expand child nutrition programs to combat child hunger, an issue Sinema has repeatedly highlighted.

Even other moderates who have been trying to shrink the size of Biden's plan have insisted that the expanded child tax credit, which provides up to $300 per child each month, must be extended.

"The Build Back Better Act must extend this vital, middle-class tax cut through at least 2025 and keep full refundability to grow our economy and give families the financial security and long-term certainty they need," Rep. Suzan DelBene, D-Wash., chair of the moderate New Democrat Coalition, said in a statement, warning that "it is our constituents who would be left behind if this enhanced Child Tax Credit is not fully extended."

The package would also set clean energy standards and incentivize utilities to switch from coal and fossil fuels. Clean energy has long been one of Sinema's top issues. Her first bill as a member of Congress called for providing billions in grants and tax credits to companies that manufacture renewable energy products.

"It is cruel and unfathomable that she's demanding severe cuts to life-saving climate legislation, but not surprising since she's been meeting nonstop with corporate executives," Varshini Prakash, executive director of the progressive climate advocacy group Sunrise Movement, said in a statement. "Sen. Sinema is out of touch with her constituents and with what's happening across the globe on climate. Maybe if she actually took the time to speak to the people of her state, she'd realize how much their families need her to deliver action on climate."