To save their majority, Democrats must awaken the "sleeping giant": Poor people who don't vote 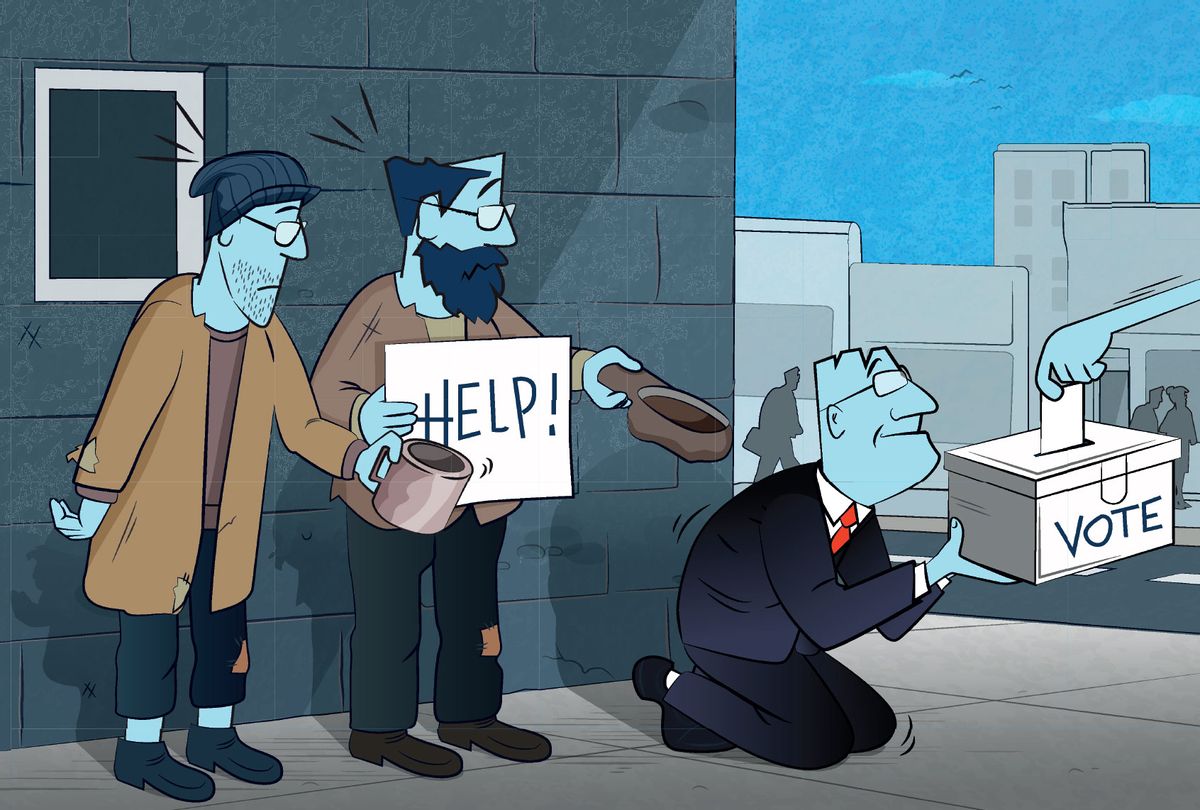 Politician on his knees begging for votes (Getty Images/Cemile Bingol)
--

As the stores shift displays from Halloween to Thanksgiving and then Christmas, it will be tempting to let the turn of the seasons and the hope of a post-pandemic life lull us into a false sense of well-being.

The noise generated by the 2021 gubernatorial campaigns in New Jersey and Virginia — and down-ballot legislative races about who is responsible for property taxes — offers no hint of the real stakes in the election. It's dangerously disconnected from the reality that Donald Trump's insurrection, which tried to use force to install the loser of the 2020 election, is still simmering across the land.

We may be briefly comforted by the primordial procession of the turning of the leaves, the cooler temperatures and shorter days. This is the cycle that has always moved us through time, long before the turbulent past few years. We are all weary, all still dealing with the collective trauma of a once-in-a-century mass death event that has left millions of us worried about the long-term consequences of a deadly virus we still don't fully understand.

It would be wonderful if the deaths of more than 700,000 Americans and the Jan. 6 attack on our nation's capital, and our democracy, amid a pandemic were all just vivid nightmares.

They were ample evidence of a nation and a planet facing existential challenges that are interconnected and loom larger as the calendar pages turn. It's clearer with each passing day that climate change is already upon us in the form of increasingly more lethal storms like Sandy and Ida that occur with greater frequency, as epic wildfires continue to burn for weeks at a time.

For three years before COVID hit, the U.S. national average life expectancy was in decline. That was the first time that had happened since the Spanish flu pandemic that started in 1918. For years the powers that be had ignored the deteriorating health of the American people and the gaping holes in the public health safety net.

RELATED: New Jersey hit hard by COVID and climate change — so why is the governor's race about nothing?

We've now exceeded the death toll from the 1918-19 pandemic by tens of thousands, and in the process have exposed how the growing wealth concentration and resulting inequality in our nation leaves tens of millions of poor and low-wage households vulnerable. We also know that it's precisely these families, most often (though not exclusively) people of color, who are the backbone of the essential workforce that served the entire society while so many middle-class people had the luxury to work from home.

At the same time, in states across the nation, the authoritarian cadre loyal to Trump has been successful in rolling back voting rights protections at an unprecedented pace, building on their electoral successes locally in 2020. Trump is the anti-immigrant demagogue who denies that climate change is real. He lied to the nation about the severity of COVID and then attempted to use the virus for tactical advantage by pitting red states against blue, a self-serving strategy that helped spread the disease and pushed the death toll ever higher.

Sen. Angus King, the mild-mannered independent from Maine, recently warned on MSNBC that our national politics were at a "fragile" and "very dangerous moment," perhaps the "most dangerous since 1860 in terms of the future of the country," because of Congress' inability to stave off the attack on voting rights that particularly targets communities of color.

King warned that the only way to "protect democracy" was by successfully beating back "this wave of voter suppression and the changing of the rules," which is now well underway in key swing states that rejected Trump and all he stood for.

So this is the backdrop against which the tightening races for governor, both in my state of New Jersey and in Virginia, are playing out. Coming as they always do one year after the national presidential contest, these "off-off-year" elections are often seen as a bellwether for the congressional midterms that come the following year — and in 2022 will be of truly historic consequence.

Republicans can roll out this second wave of Jim Crow-style race-based voter suppression because they have the leverage from years of disciplined party building from the bottom up, accomplished in successive elections at the local, county and state levels. It's given them control not only in places like Florida and Texas but in previously Democratic or "purple" states like Ohio and Pennsylvania.

Meanwhile, Democrats, who officially control the White House, the House of Representatives and the U.S. Senate, were unable to pass even a watered-down version of a desperately needed voting rights bill championed by Sen. Joe Manchin, D-W.Va., who mistakenly believed it would attract Republican votes.

Efforts to hold those responsible for the Jan. 6 violent attack on the U.S. Capitol — which was meant to derail the peaceful transition of power and install minority rule by force — continue to meet serious resistance. A significant number of sitting members of Congress continue to give voice to Trump's racist Big Lie that the election was stolen in urban centers where voters of color are concentrated.

While the Biden-Harris ticket won a solid national victory in 2020, the Trump white supremacist tractor beam energized down-ballot Republicans, and Democrats lost ground both in the House and in the nation's statehouses, where voting rights and reproductive rights are defined.

Biden and Harris won more votes than any ticket in U.S. history, but Donald Trump also got the second-highest vote total ever, adding several million votes to his 2016 count.

In the 2020 election in New Jersey, Trump once again carried Ocean, Cape May, Salem, Hunterdon, Warren and Sussex counties, and added to his vote totals from 2016 in Atlantic, Bergen, Burlington, Gloucester and Mercer counties.

As they seem to do in almost every campaign, polls appear to be tightening between New Jersey Gov. Phil Murphy and his Republican rival, former Assemblyman Jack Ciattarelli. Last month, a Monmouth University poll gave Murphy a 13-point advantage. A recent WPIX/Emerson College poll found that Ciattarelli had closed that gap to just six points, with 7% of those polled still undecided.

According to that same poll, Murphy's time leading the state through the pandemic was reflected in declining poll numbers, with just 49% viewing him favorably and 47% unfavorably.

In Virginia, 2021's other bellwether race, a Monmouth University Poll has Democratic former governor Terry McAuliffe dead even in his race with Republican billionaire Glenn Youngkin.

Malinowski, who only won by a few thousand votes in 2020 — less than 1% of the votes cast — has become ensnared in allegations he failed to properly disclose personal stock transactions. The Hill reported Oct. 21 that the Office of Congressional Ethics has concluded it found "substantial reason to believe" Malinowski had failed to "disclose stock transactions in accordance with ethics rules and federal law."

Nancy Pelosi holds the House majority by just three seats after her party lost unexpected ground in the 2020 election, and has continued to lose ground since. Along with the precarious status of Malinowski's seat, there's also the 7th district in Virginia, where Democrats prevailed in 2020 by just a 1% margin. Many Republicans think they can win the majority purely based on favorable redistricting in Texas and Florida.

If Democrats are to beat the odds and hold control of Congress in 2022, it's vital that the party in New Jersey and Virginia sees the Nov. 2 election as a kind of fire drill to engage what the Rev. William J. Barber II has described as the "sleeping giant of poor and low-income voters" in their states.

That under-appreciated voter cohort provided the 2020 margin of victory in key places like Georgia, where they sent Democrats Rev. Raphael Warnock and Jon Ossoff to the U.S. Senate. While some Beltway consultants urge Democrats away from progressive policies that appear overly "left" or "socialist," the party must energize its base, which means speaking directly to the pressing needs of poor and low-wage voters of all colors.

The report continues by observing that "low-income voters are not a monolithic group" but that "they represent a significant population of voters that is often overlooked and misunderstood." The broad population of "eligible low-income voters," the report concludes," is "an electoral sleeping giant, holding the potential to shift our political maps and reshape our political priorities."

But the significance of the low-income electorate, as the report then observes, goes beyond winning or losing elections. "The concerns of these voters are widely popular, yet far from being fully implemented. Instead, 140 million people are poor or living one emergency away from economic ruin, while the wealth and abundance of the country becomes concentrated in fewer and fewer hands. In addition, the democratic rights of the people are under attack with voter suppression laws."

According to PPC's state-by-state analysis of the 1.4 million registered low-income voters in New Jersey, just over a million of them voted in 2020, meaning that close to 400,000 sat out that election. While that cohort's registration rate was close to 80 percent, only 58 percent felt sufficiently engaged to follow through and cast a ballot.

Consider how the 2020 race between Rep. Jeff Van Drew, a Trump Republican, and Democratic challenger Amy Kennedy might have gone if the "sleeping giant" of low-wage workers had been fully awakened in New Jersey's 2nd congressional district — and especially in Cumberland County, which is one of the poorest in the state.

In Virginia, according to the PPC report, 1.74 million low-income voters were registered and 1.34 million actually voted, meaning that another 400,000 registered voters sat out 2020, when they could have had a significant impact on down-ballot races.

In the final days of the 2021 campaign, Democrats in both the Garden State and the Old Dominion need to get a jump on their 2022 to-do list, zeroing in on low-income voters to give Murphy and McAuliffe convincing victories. If you knock on their door in 2021, they might remember who you are when you come calling in 2022.

It could well be that awakening the "sleeping giant" is all that stands between us and the reimposition of the tyranny of Donald Trump's minority rule.

More Salon coverage of the "off-off-year" elections in New Jersey and Virginia: