Co-created by Ava DuVernay, "Colin in Black & White" makes an artsy muddle out of an inspiring sports icon's story 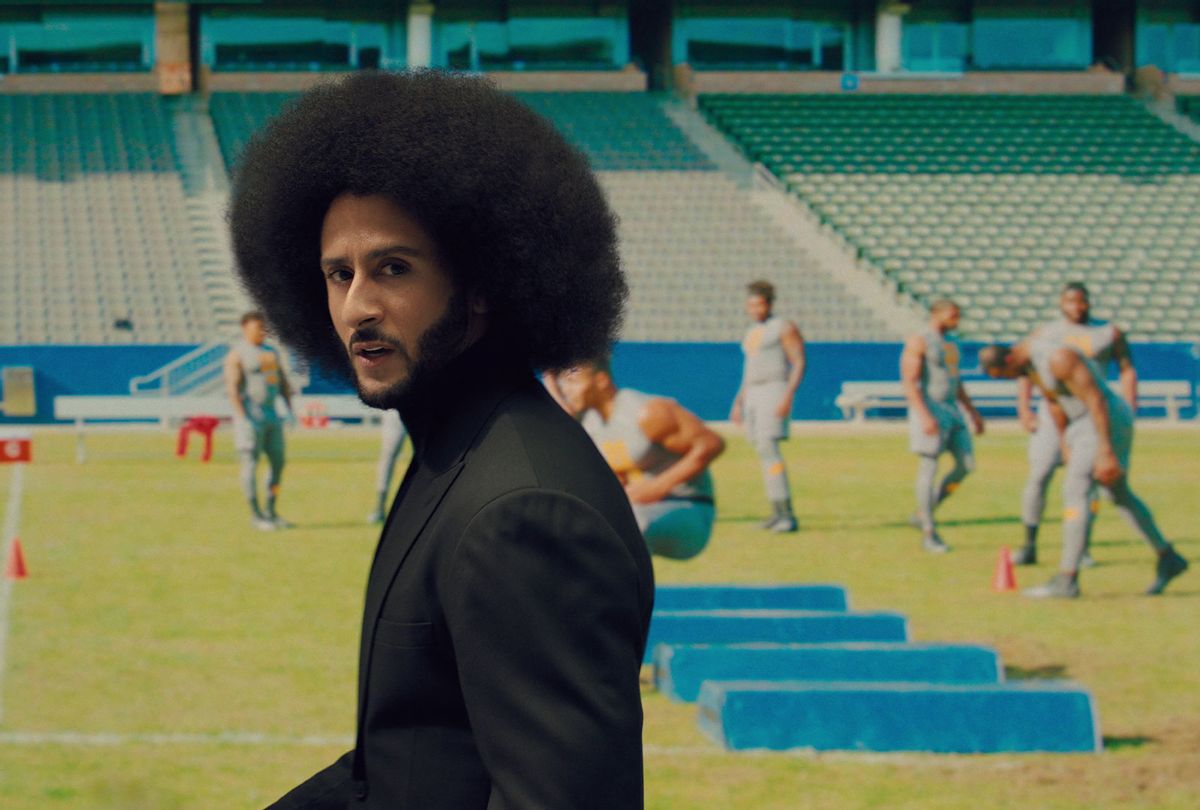 "What you start out as isn't always what you become." This is lesson Colin Kaepernick sees in the story of Romare Bearden, one of the 20th century's more influential Black artists. Bearden could have become the first Black baseball player in the major leagues, but the catch was that nobody would know that. Allegedly the Philadelphia Athletics' offer stipulated that he would have to pass for white, so Bearden declined, abandoning baseball to focus on art, his true passion.

Kaepernick draws many such parallels in "Colin in Black and White," the limited series he co-created with Ava DuVernay that is a collage of Black history moments and citations pasted onto an anti-racism brief folded around the story of Kaepernick's adolescence. Bearden, one of America's pre-eminent collagists, would have appreciated the effort. But even he may have been left wanting by the final product.

The fieriest filament in this show's blazing spectacle is its subject's confidence and how that translates in Jaden Michael's portrayal of the teenage Colin, the top athlete at his small-town California high school who nevertheless feels like an outsider. But this also overwhelms the piece in its opening episode and gets in the way of its ability to become a cohesive story that makes its point.

"Colin in Black and White" is ambitious in the similar way to young Colin Kaepernick, in that it is attempting to pull off several storytelling approaches in six episodes. It would have been far more effective if it had focused on one of those avenues and laid it out for us, brick by brick. Instead we're presented a pile of narrative that doesn't neatly cohere.

One of the few Black kids in his school and a biracial adoptee, the biracial Colin thrives at football, baseball and basketball while still maintaining a high-enough grade point average for Harvard to come knocking with a baseball scholarship offer. His fans know that part of his legend – that he could have gone pro straight out of high school if he had only chosen baseball, but he held firm to his love of football.

Throughout the limited series adolescent Colin is pushed by coaches and his adoptive white parents to Teresa (Mary-Louise Parker) and Rick (Nick Offerman) to choose the path of baseball, but Colin is insistent that he wants to be play football. He also knows he's destined to achieve the rarer feat of becoming one of the few Black quarterbacks in the NFL – which he eventually does. But not without struggle, body-breaking effort and putting up with indignities beyond counting.

Out the many sports superstars whose lives epitomize America's fraught relationship with race and racism, Kaepernick's is extraordinary.

At nearly 34 years old he's a symbol of civil rights activism and resistance. Bookending segments and interstitials feature the former professional football star contemplating how turning points in his high school sports career and social life relate to struggles Black Americans have always faced, including its luminaries. Through these segues it is clear to see that Kaepernick understands history and his place in it.

Despite how that may read, the show's inspiration, star and narrator never comes off as arrogant, but rather as self-aware. In his segments he acknowldges that the indignities he's faced aren't unique, that Black bodies have always been judged and policed – even famous ones. Especially the famous ones.

Sometimes the historic parallels made here relate directly to episodes from his teenage years, particularly the opening episode where he clashes with his mother over his desire to get cornrows inspired by NBA superstar Allen Iverson, an All-Star and MVP when Kaepernick was still in high school. As his adolescent self moves between dominating high school football, basketball and baseball teams, adult Kaepernick considers how that era in his life relates to broader issues like colorism or racial inequity in the justice system and social spheres.

In an early scene he acknowledges the benefit that his light skin affords him in white spaces, and how his parents' whiteness gains him privileges other Black peers didn't receive. His father pulls strings to get Colin trained by one the best football coaches, for example, which eventually nets him a starting position on the varsity squad. To provide contrast he cites the case of Kelley Williams-Bolar, an Ohio single mother who served 10 days in jail for improperly using her father's home address on school applications to gain access to a better education for her children.

All of this tracks . . . after a point. Getting there requires a willingness to navigate a mishmash of storytelling styles and a heavy layer of didacticism, along with accepting the odd choice to set present-day Kaepernick inside a spare gray box resembling a room at a modern art museum. From there he considers scenes from his youth as analyzing an immersive theatrical experience or a movie. The problem is that the show's depiction of yesteryear feels like an earnest melding of "The Wonder Years" with "Everybody Hates Chris."

This also happens to the part of the "Colin in Black and White" that works best, especially once Kaepernick pulls back on his insistent narration of his teenage version's inner thoughts. Its success makes one realize that Kaepernick's story could have worked as a half-hour drama that its young star could carry quite easily.

Michael's ample expressiveness does not require Kaepernick's background noise to let us know what Colin is thinking. This is particularly apparent when he's contending with microaggressions hurled his way by the adults in his life or stewing whenever his parents, the paragon of white Midwestern, go-along-to-get-along niceness, fail to defend him.

In comparison Parker and Offerman play Teresa and Rick as borderline comedy figures – supportive, loving but willfully clueless when it comes to some very obvious instances where their son, the only Black kid in the room, is coming under attack. Maybe they really were that oblivious; if that's so, this is a part of the story that could have benefit from a bit of narration instead of leaving us to make assumptions about their ignorance.

This is also one of many choices that make a person wonder who is this show's intended audience. Its tone lurches between passion, provocation and sweetness frequently enough to make a person wonder: Does it mean to relate to viewers who understand Kaepernick's point of view or educate those who don't? Either way, the throw misses the receiver. That's bound to be disappointing to anyone anticipating that this project would live up to the greatness of the man who inspired and co-created it.

"Colin in Black and White" debuts Friday, Oct. 29 on Netflix. Watch a trailer for the series via YouTube.