Republicans simplify their defense of Texas abortion ban: Women are too stupid to have rights 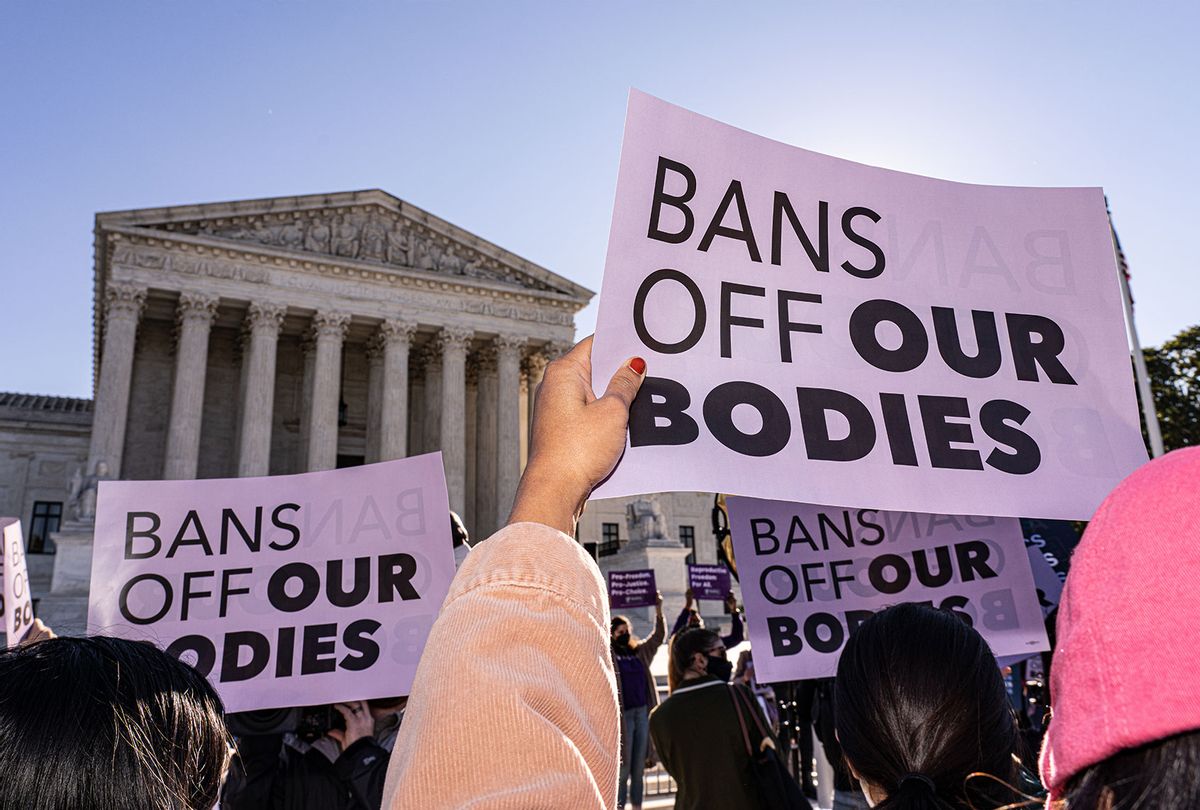 On Monday, the Supreme Court heard oral arguments over SB8, a new Texas law that set up a bounty hunter system that empowers private citizens to use lawsuits to prevent abortions. Going in, most observers expected the Republican-dominated court to be eager to uphold this law. In a twist, however, multiple conservative judges — including Donald Trump appointees, Justice Brett Kavanaugh and Justice Amy Coney Barrett — seemed skeptical.

To be sure, it's not because the conservative justices care about human rights, but because they care about their own power and look askance at a law designed to evade legal review by federal courts. Now the expectation in legal circles is that the court will throw out the Texas law and open the door to banning abortion through a Mississippi case, Dobbs v. Jackson Women's Health Organization, which is a straightforward challenge to Roe v. Wade.

Most of Monday's arguments were centered around impenetrable legalese about "ex parte young" and "sovereign immunity." But through the thicket of lawyerly jargon about who has what legal power here, a picture did emerge of the actual moral and political argument Republicans are making about abortion rights. It all boils down to one very basic, insulting premise: Women are simply too stupid to be allowed rights.

Throughout arguments, Solicitor General of Texas Judd Stone and Justice Samuel Alito, both Federalist Society-linked far-right Republicans, casually spoke about women as if they were incapable of handling the choice to have an abortion. When asked about who could be suffering "extreme moral or otherwise psychological harm" over someone else's abortion, for instance, Stone invoked the tragic tale of a mansplainer who is horribly abused by a woman who decides to ignore his opinion.

An individual discovers that -- that someone -- that a close friend of theirs who they'd spoken with about -- about pro-life issues and about abortion has chosen instead to have a late-term abortion in violation of S.B. 8, and they were very invested in the -- basically, in that child's upbringing and the child's coming into being.

Oof! Can you imagine the nerve of this hypothetical woman? After someone goes to all that effort to browbeat her about how much he hates abortion, she up and decides that she is going to abort a pregnancy anyway! One can feel Stone's heart breaking for the mansplainer denied his god-given right to boss women around.

And if that diatribe weren't sexist enough, Stone had to slide in that little jab about "late-term" abortion. It's been a common talking point for GOP defenders to claim that the law gives women plenty of time to get abortions. The implication is that only dum-dums can't get it done on time, and therefore they deserve forced childbirth. But this supposed "six weeks" to decide is utter nonsense. While the media keeps calling the Texas law a "six week" ban, it is, at best, a two-week ban, as that's the length of time since the missed period indicating pregnancy.

Alito, on the other hand, decided to insult women's intelligence from another angle, portraying women as mental children who are being manipulated by sinister abortion doctors and therefore need to be protected from having choices. Alito repeatedly invoked the specter of a bird-brained woman who didn't realize until after the fact that the abortion — the one she scheduled, went through and paid for — meant she wasn't going to have a baby. He spoke of a woman who wants to sue "the doctor who performed my abortion because it caused me physical and/or emotional harm," conjured up a woman who "sues an out-of-state doctor" for "for physical or emotional harm suffered as a result of the abortion," and asked of a woman who "sues a doctor who has flown in from another state to perform the abortion."

RELATED: Republicans thought the Supreme Court could stealthily ban abortion. They were wrong

As Justice Sonia Sotomayor gently pointed out, there are already "common law torts" that cover "emotional infliction of harm, breach of contract, medical malpractice." So if a woman was actually forced or tricked into an abortion she didn't want, she can already sue for damages. Alito, however, wasn't interested in the real world. He wanted to wallow in an elaborate sexist fantasy, where women routinely get abortions without understanding such a procedure means they won't get to have the baby. Wouldn't the mansplaining hero in Stone's tragic tale have told them?

Alito was riffing on a sexist notion that has been rampant in the anti-choice world for decades. Women are naturally too dumb to make choices, the argument goes, and therefore end up awash in regret after foolishly letting the "abortion industry" take their babies away. This myth persists despite ample evidence that the opposite is true, and that a whopping 99% of patients report, five years after the fact, that their abortion was the right choice. In fact, most women who get abortions are already mothers, so they understand intimately what the other choice already looks like.

The last time the Supreme Court chipped away at abortion rights, in the 2007 Gonzales vs. Carhart decision, Justice Anthony Kennedy justified upholding a federal ban on an abortion procedure used to end pregnancies in the late second or early third trimester. Even though most of those abortions are done for medical reasons, as Dahlia Lithwick noted in Slate at the time, "His opinion blossoms from the premise that if all women were as sensitive as he is about the fundamental awfulness of this procedure, they'd all refuse to undergo it."

Kennedy's argument wasn't just false and condescending, it also set up a legal precedent for the idea that women are too dumb to understand what abortion is and therefore need to be kept from having one for their own good. No doubt Alito was thinking of that as he kept harping on this fantasy of the woman tricked by a doctor into getting an abortion. It's looking unlikely the court will uphold the Texas law, but there's a good reason to worry that they will use the Mississippi case to end the legal right to abortion, citing the myth that women are too stupid to be trusted with rights.