Biden is letting tourists cross the U.S.-Mexico border. Why is he keeping out asylum seekers? 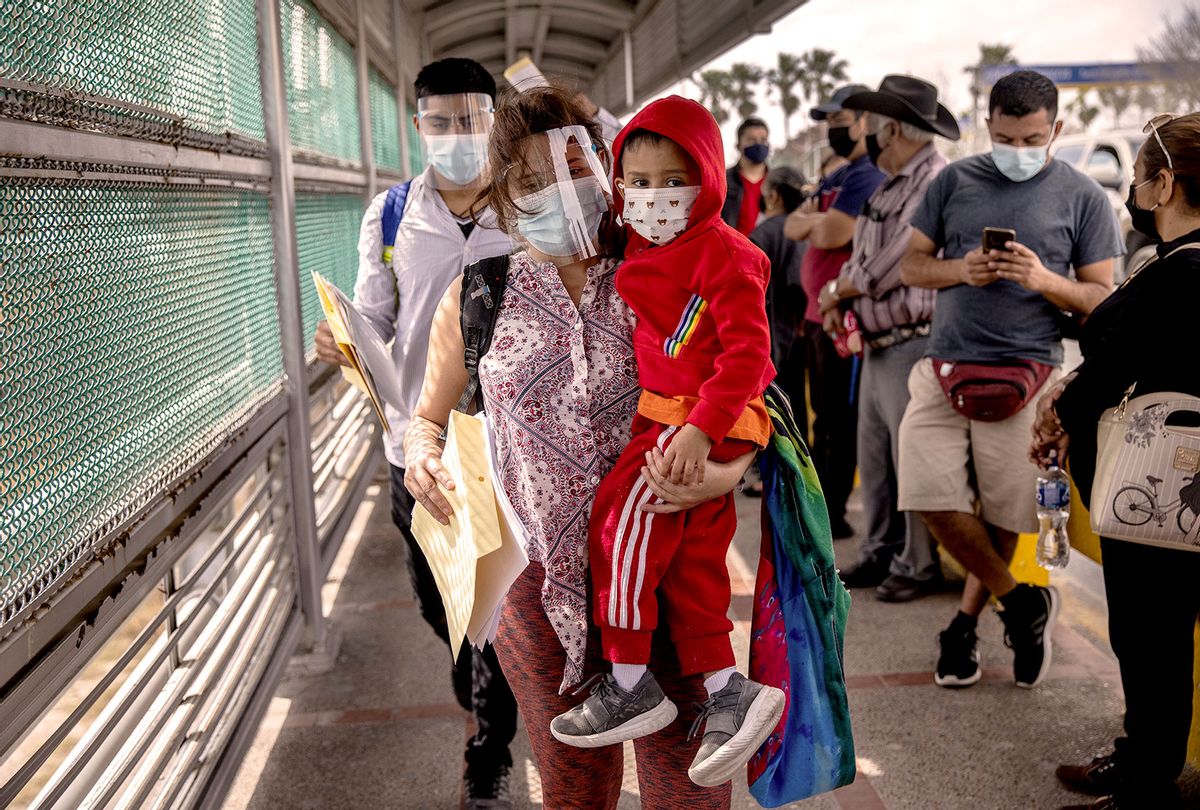 A Honduran mother carries her son, 4, across the U.S.-Mexico border as part of a group of at least 25 asylum seekers who where were allowed to travel from a migrant camp in Mexico into the United States on February 25, 2021 in Matamoros, Mexico (John Moore/Getty Images)
--

This week, the Biden administration is making a major change to U.S. immigration policy: allowing fully-vaccinated tourists, businesspeople and long-separated family members to enter the country over the U.S.-Mexico border.

Dropping that COVID-era ban will allow relatives who haven't seen each other in months to reconnect and provide a much-needed economic boost to border communities, many of which are essentially binational cities that depend on trade between the two countries.

One group of people, however, will still be shut out of the country despite having arguably the most pressing need to be allowed in: asylum seekers who have made the arduous journey to the border because of legitimate fears of being harmed or even killed if they remain in their home countries. The Biden administration has shunned the pleas of immigration advocates throughout the U.S. and retained the Trump-era Title 42 policy, which allows the U.S. to turn away asylum seekers (regardless of vaccination status) without giving them the chance to make their case for protection.

Administration officials assert that asylum seekers are in a different position from other travelers, and therefore should be treated differently. This is because Customs and Border Protection (CBP) plans to detain them, after crossing the border, in crowded holding tanks — which are even less safe than usual during a pandemic caused by airborne illness.

This argument, however, makes about as much sense as saying you shouldn't buy a house because it would be wrong to burn it down for the insurance money. After all, nothing requires CBP to confine people in the first place, least of all in such dangerous and unsanitary conditions.

In any case, the Biden administration has had more than nine months in power to find safer ways to process asylum claimants than keeping them in crowded pens. Indeed, officials have repeatedly asked for more "time" from attorneys challenging the Title 42 order, precisely because they promised they were still working to "build capacity" to process asylum seekers safely.

It's unclear what the Biden administration did with all that time they demanded — and received. It seems it was squandered, because now officials tell us they can think of only two possible policy choices, neither of which is acceptable from a human rights or public health perspective: summary expulsion or detention in crowded, dangerous facilities.

Even worse, some Title 42 expulsions are carried out by flying people overseas. As a result, people risk catching the virus on airplanes and further imperiling the public health of impoverished and largely unvaccinated countries in the global south, including Haiti.

This is why most public health experts oppose the Title 42 order, saying it is a migration deterrence strategy masquerading as public health. Most recently, even the nation's highest-ranking medical official, Dr. Anthony Fauci, has stated that "expelling [migrants] is not the solution" to the pandemic.

When Trump was still in office, he tried in essence to halt all immigration during the pandemic, pausing green card processing and banning asylum. Biden subsequently ended Trump's green card ban, but he left other restrictions in place, including Title 42.

The cost in human suffering of these anti-immigrant policies has been incalculable, yet they show precious few rewards for public health. Broad travel and asylum bans do little to slow the spread of COVID-19 when it has already penetrated every human population; nor are they necessary in a world where highly-effective vaccines exist to mitigate the risk of the virus.

If concerns about public health truly underlay Biden's immigration policy, the U.S. could easily make vaccines more widely available to would-be asylum seekers. Yet it chooses to ban them categorically instead. When one group of people is singled out in this way for no good reason, it's hard to avoid the conclusion that motives other than public health are at play: racism, class bias, xenophobia and the most cynical kind of politics.

That shouldn't be the legacy of an administration that promised to build a more welcoming immigration policy, nor of one that rose to power on the votes of a broad multiracial coalition. When it comes to immigration, Biden can — and should — build back better.

Read more on Biden and immigration:

Joshua Leach is the Public Policy and Communications Strategist for the Unitarian Universalist Service Committee.